There are so many temples to explore around Siem Reap. Watch the sunset at the legendary Angkor Wat, get lost in Baphuon, pretend to be Laura Croft in Ta Prohm and feel small under the towering faces of Bayon. This is not a place to be rushed, take your time to explore, a few days if you can.

You won’t get bored as the architecture and design changes from one temple to the next, you will be blown away by the size and details of each one, and when you can climb the huge stone steps to the top you can appreciate the scale of it all. Tickets are $20 (£12.75) a day and well worth every cent. Most tuk-tuk drivers will be your taxi and guide for the day for a prearranged price.

*update for 2020: ticket prices have risen quite a lot since 2011, you can find up to date information here*

Angkor Wat – the famous one

The breathtaking Angkor Wat is the largest religious monument in the world. It was built in the 12th century by King Suryavarman II as a Hindu temple for the Khmer empire, before gradually turning into a Buddhist temple at the end of the century, which it still is to this day. It has become the symbol of Cambodia, appearing on the flag, and attracts millions of visitors a year. You can avoid the crowds by arriving at sunrise, which is worth it on a clear day. 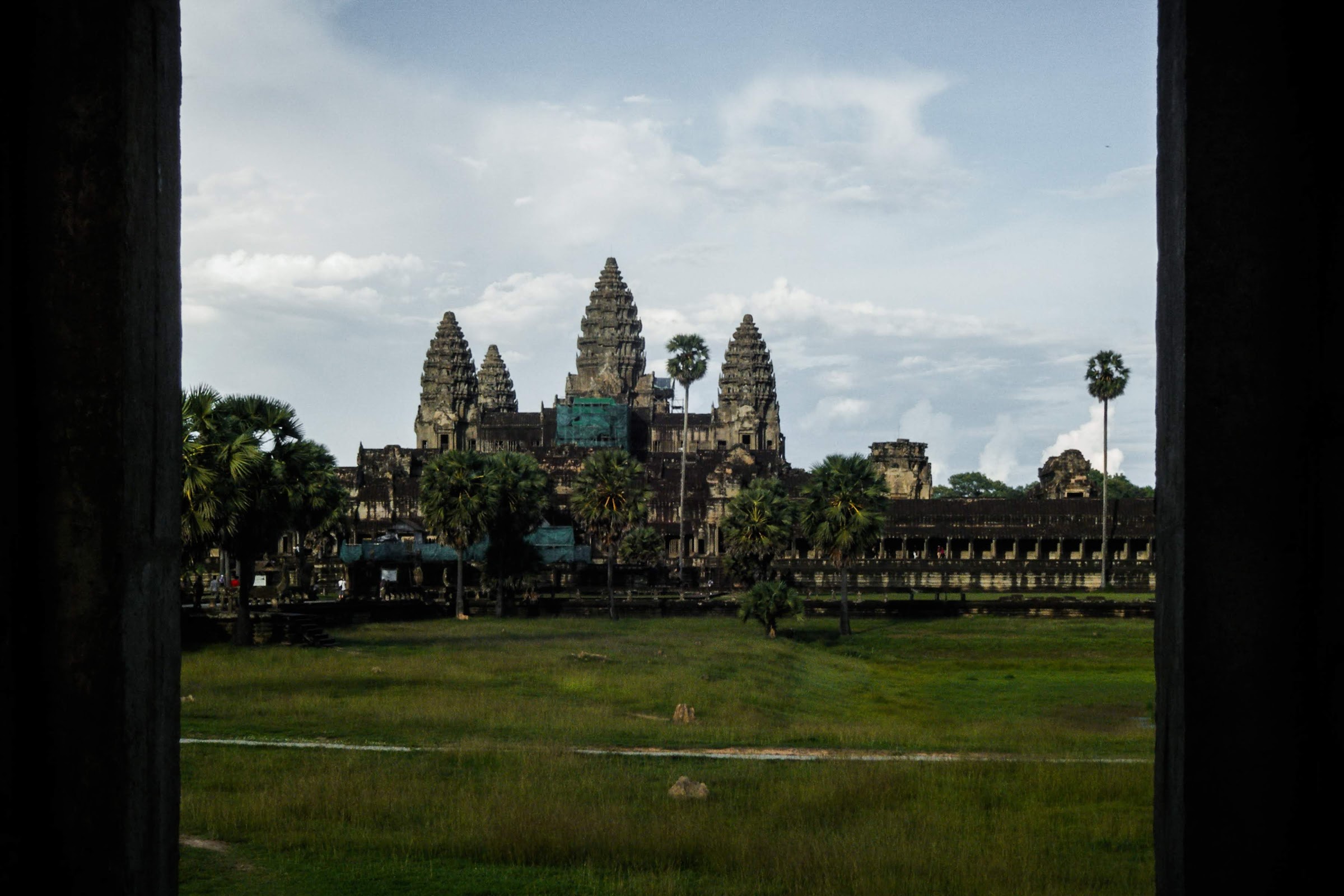 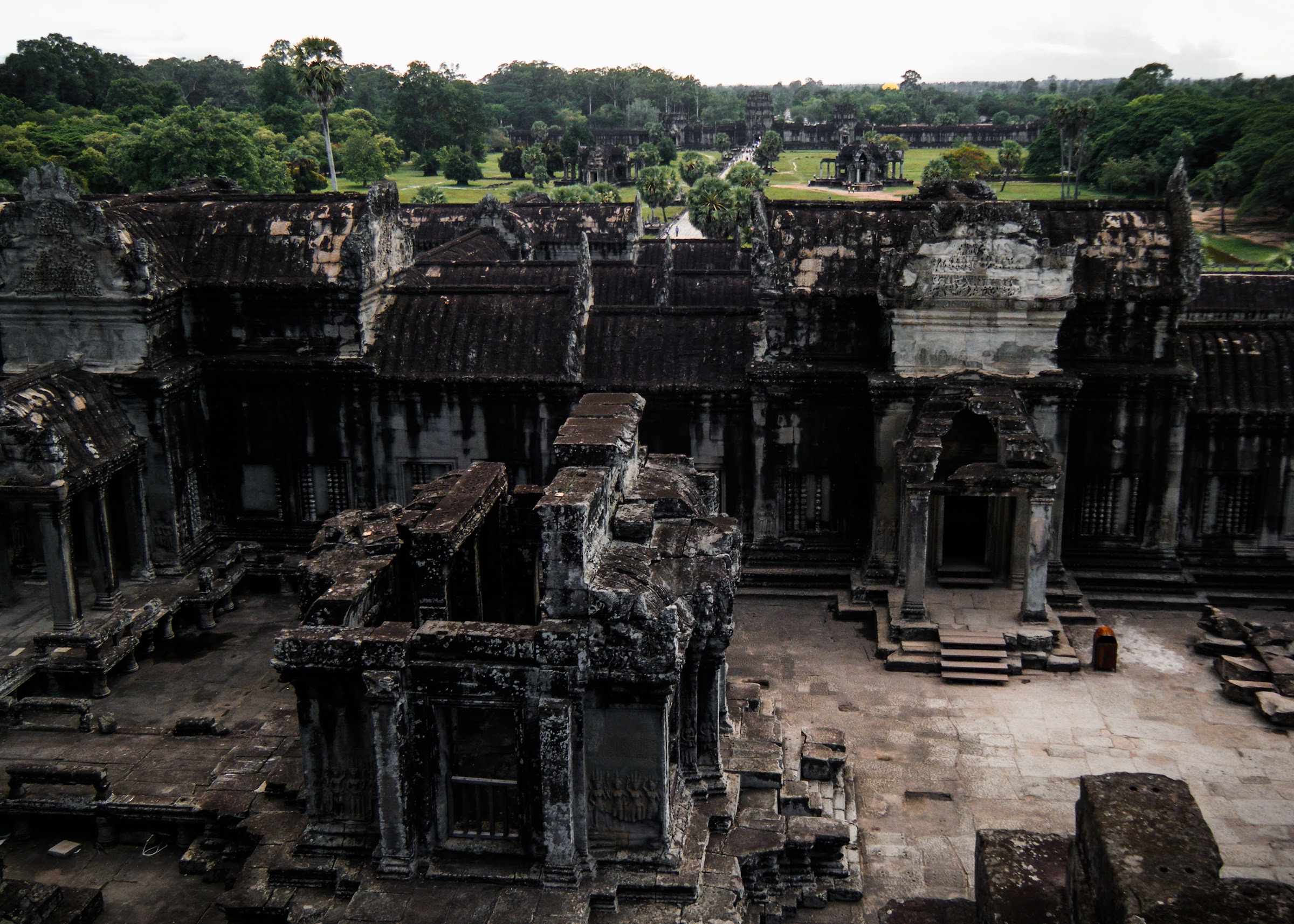 Angkor Thom – the one with the faces

This fortified city was built by King Jayavarman VII after Angkor Wat was ransacked by the Chams, the enemy of the Khmer. Building with stone and brick was reserved only for the gods, so the rest of the city has decayed over the centuries. What remains are the cities five 20m high gates, the most impressive being the Victory Gate, adorned with four giant faces of the Bodhisattva of compassion. 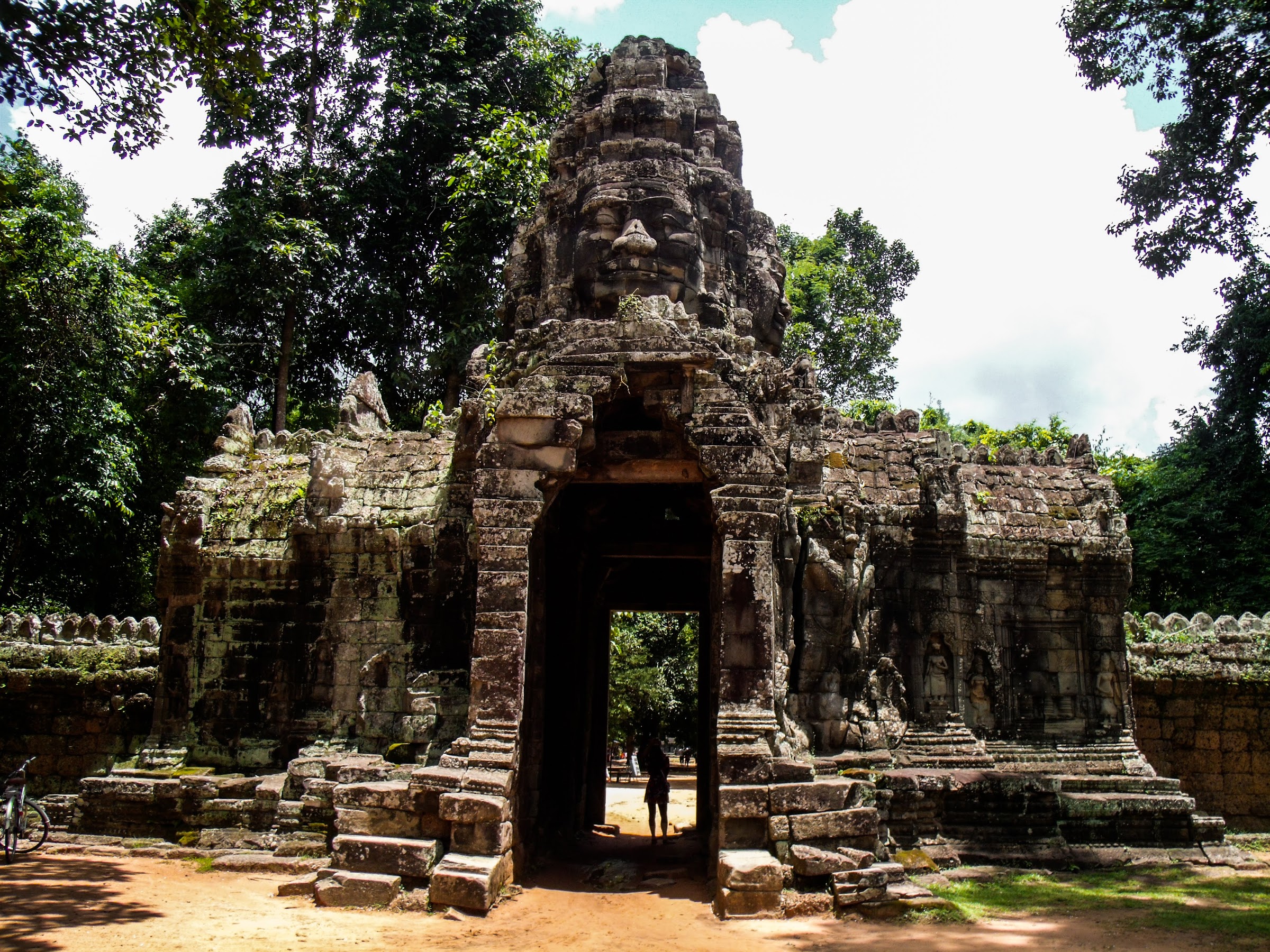 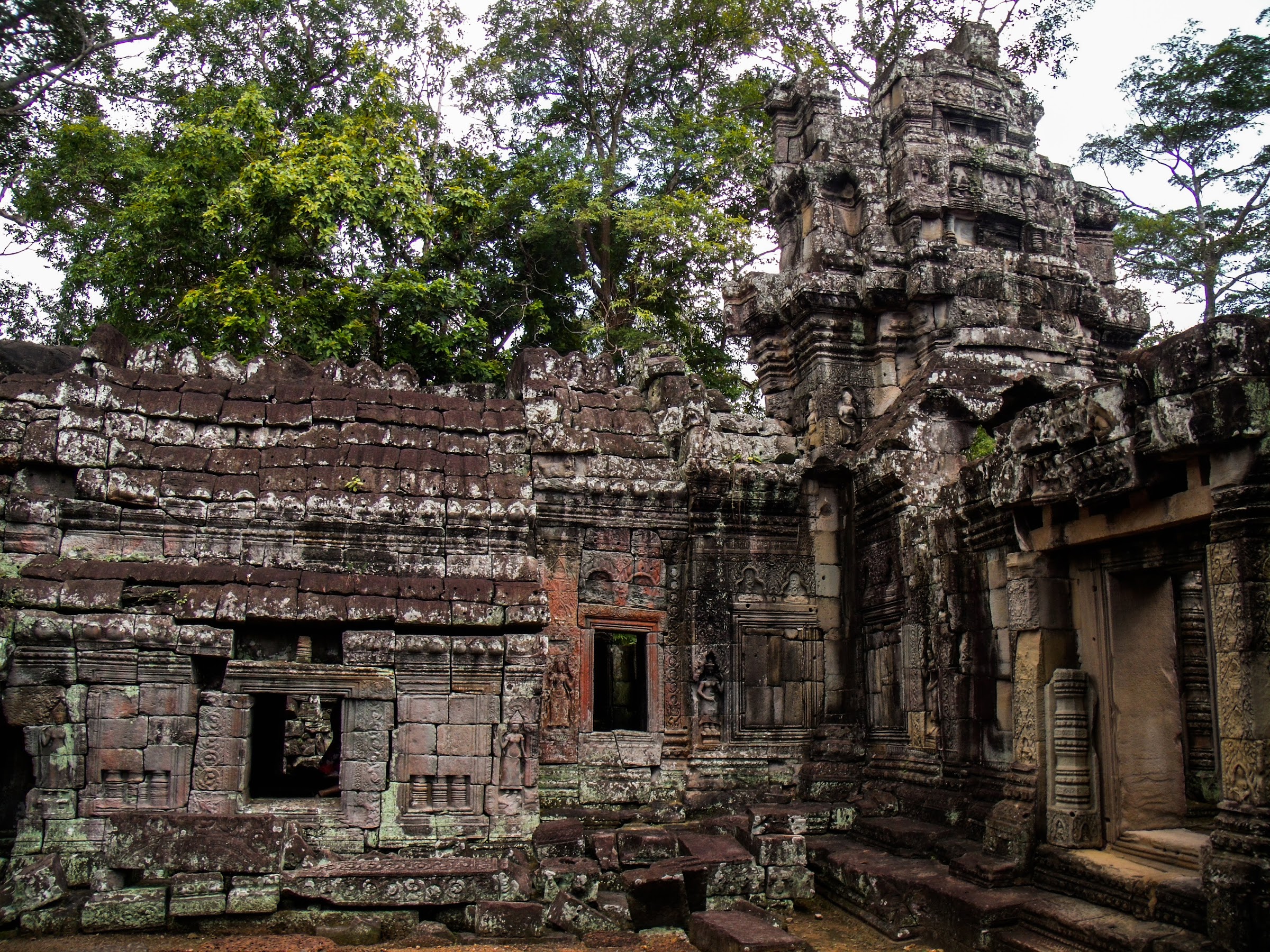 Ta Prohm – the Tomb Raider one

This 12th-century Buddhist temple is a reminder of the awesome power of nature. The crumbling stone walls are held together with the powerful roots of ancient trees. It’s also known as “The Tomb Raider one” after the 2001 film, starring Angelina Jolie was filmed here and it perfectly captures the eeriness you would experience if it wasn’t heaving with tourists. 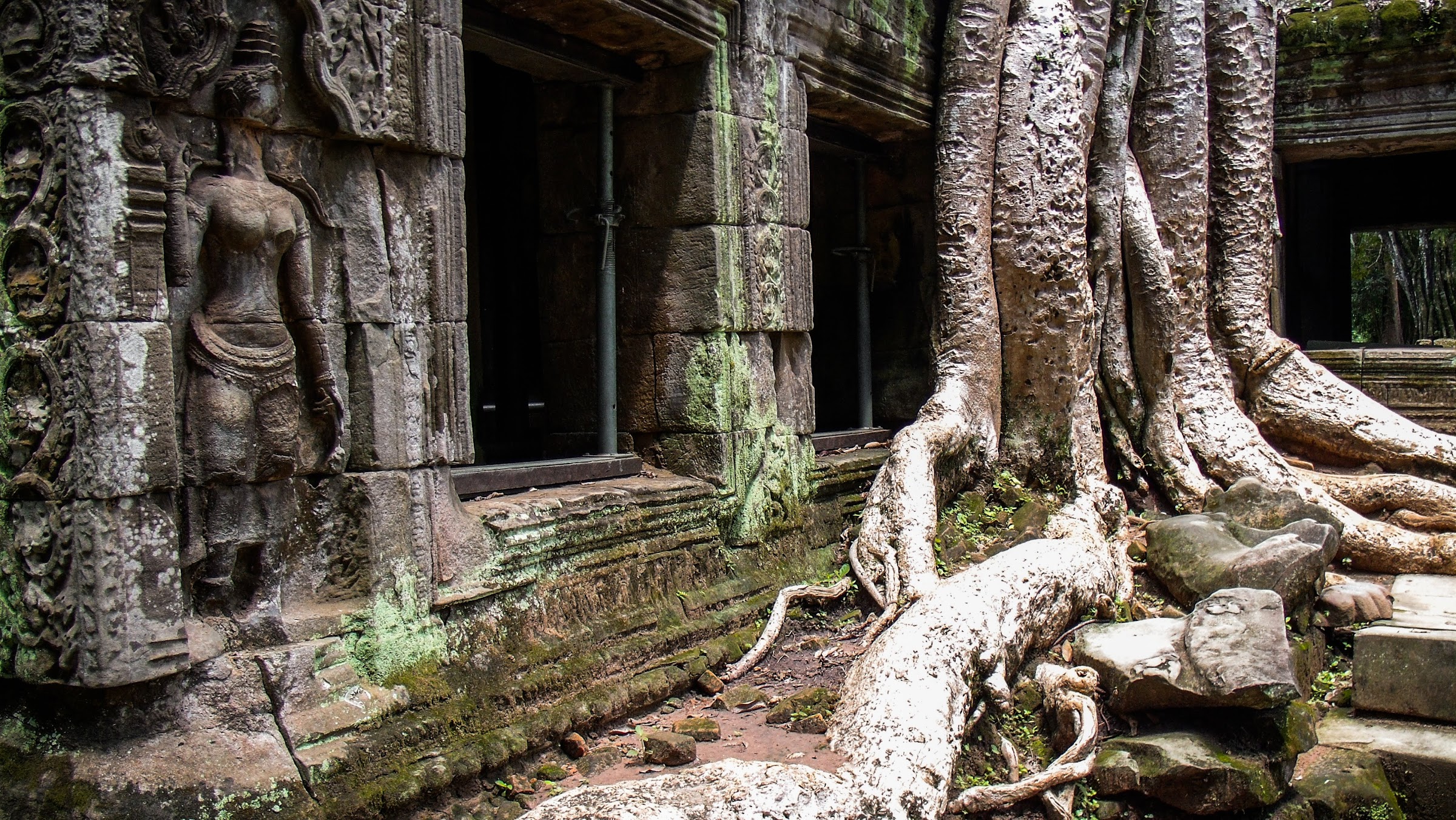 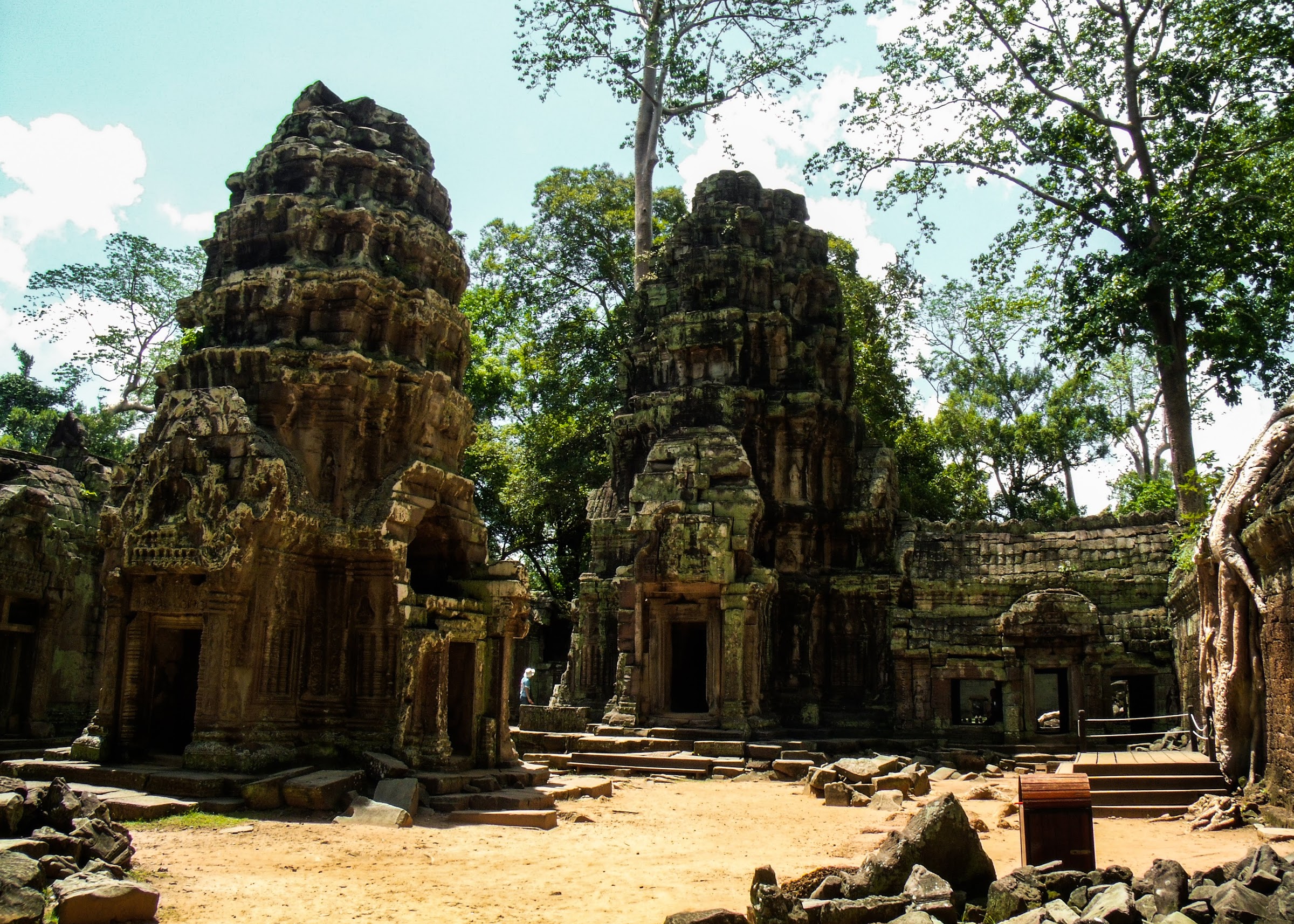 The city of Siem Reap is a hot spot for people wanting to explore the temples so there are plenty of options for accommodation. I spent a few nights in the Siem Reap Hostel, a ‘luxury hostel on a backpacker budget’. It’s even got a pool! I would recommend the dorm rooms here if you’re looking to meet new people. I also spent a few nights in the Siem Reap Central Hostel just across the road, it’s more like a hotel with its fancy rooms and en-suite bathrooms. This is a great place if you need some downtime away from the backpacker scene.

Both are very close to the central Old Market, a labyrinth of stalls selling everything from clothes to souvenirs, and Pub Street, full of bars and restaurants. My favourite place for a late-night beer or bucket is the Angkor What Bar, and an amazing place for dinner is the Khmer Kitchen, good local food for great prices. You can also get some expensive but delicious ice-cream at Swensen’s, treat yourself after a hard day of exploring temples. 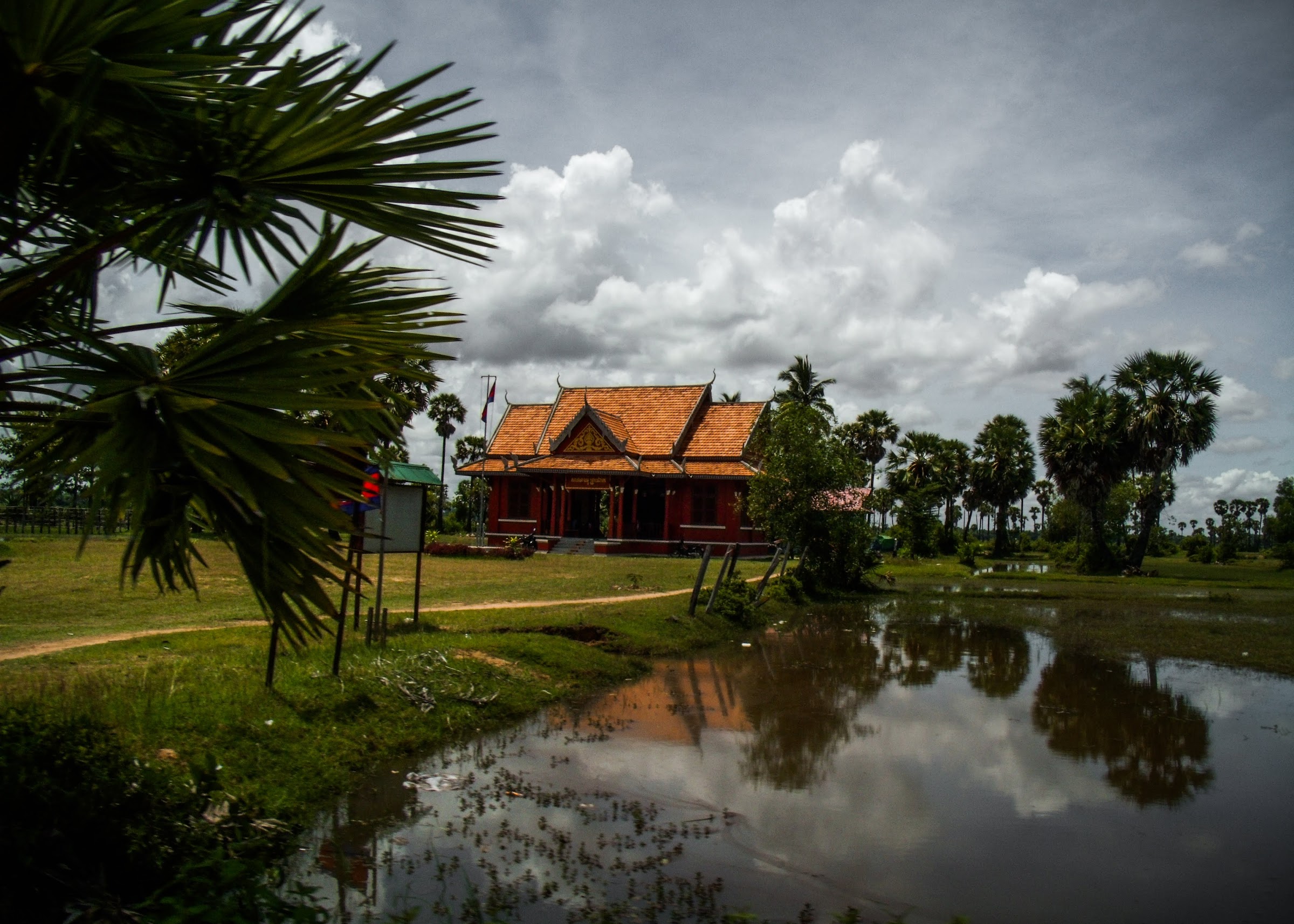 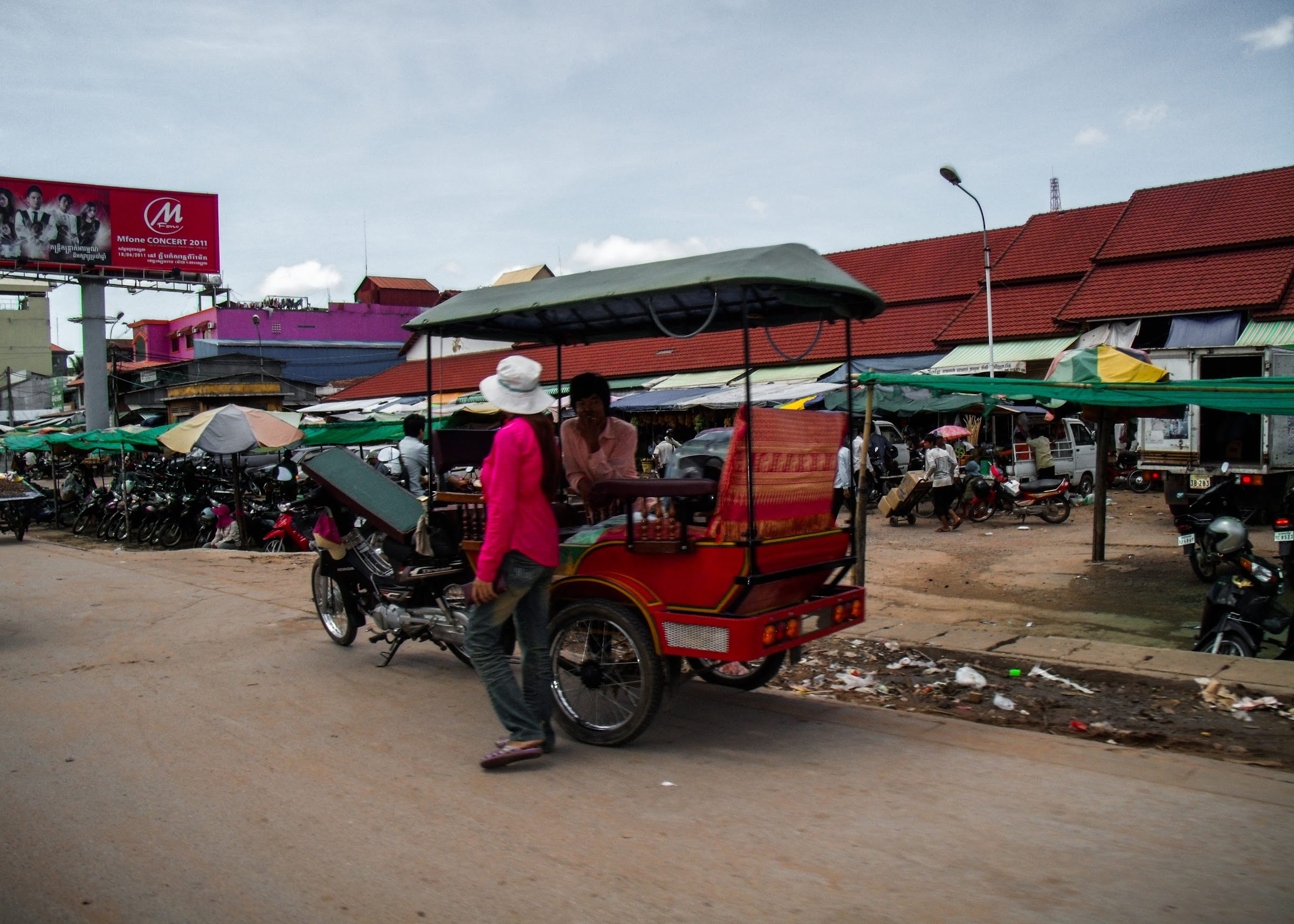 Going to the gun range

One thing that a lot of people choose to do in South East Asia, particularly Cambodia and Vietnam, is bringing their favourite video game to life by going to the shooting range. One night during dinner we met a crazy tuk-tuk driver called Tin Tin who promised to take us to the guns. The next morning we found him (or he found us) and we were off into the middle of nowhere.

Eventually, we arrived at an old army base and chose our weapons of choice. We picked an AK47, an MK5 and an M16, the guns I always picked playing Rainbow 6 or James Bond. We took turns shooting each gun and we even got to keep the target and a couple of bullet casings as souvenirs.

If you’ve heard a rumour that you can shoot a rocket launcher at a cow, this is sad but true. The catch is, you have to buy the cow from a farmer and if you miss you’re stuck with a pet cow. I’m sure the farmer would take it back. Better yet, don’t even do it. What did that cow ever do to you? Don’t even think about it, sicko. You can fire a rocket launcher right into the side of a hill instead, but it’s expensive and stupidly dangerous. 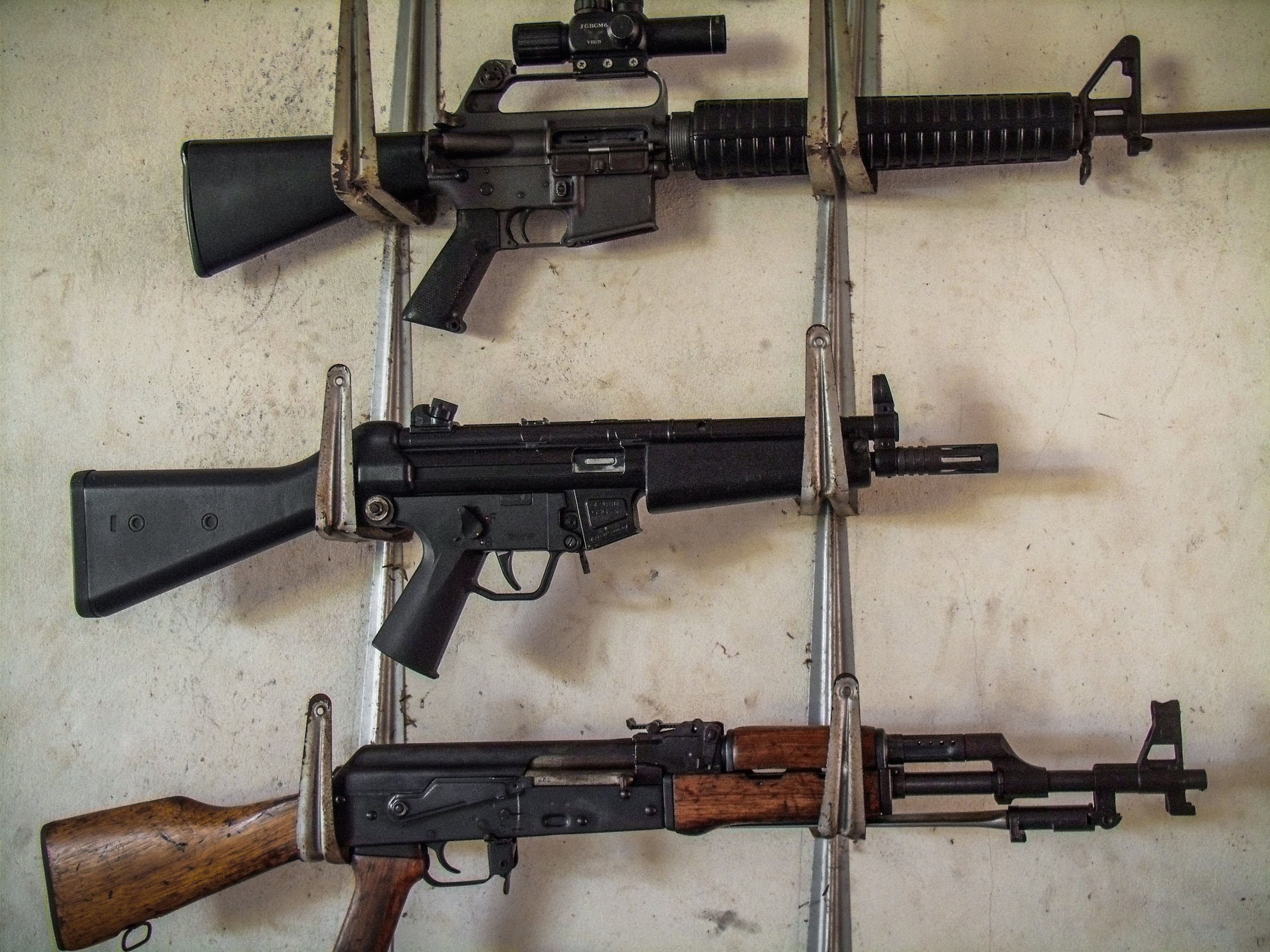 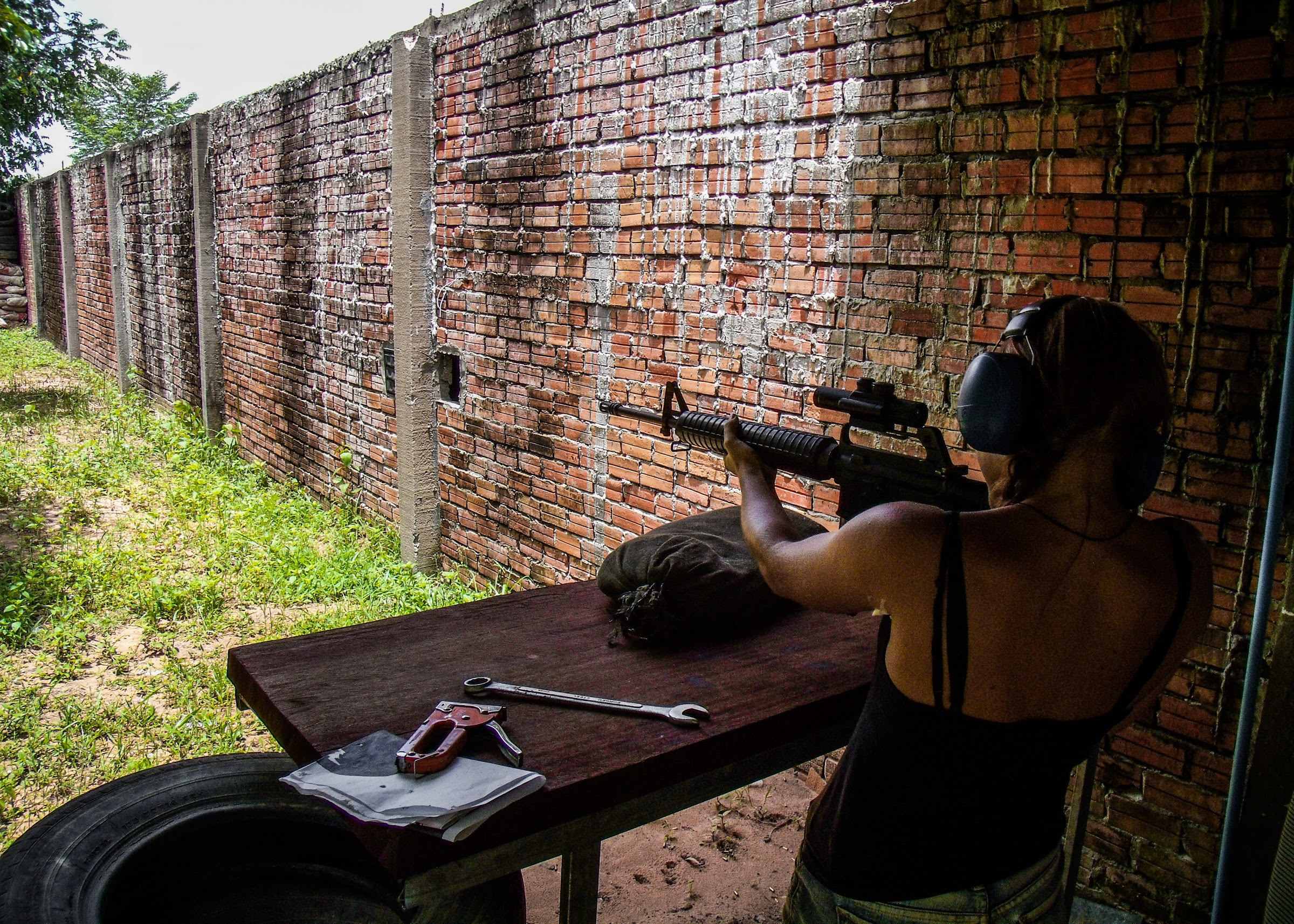