Whistler is fast becoming as popular in the summer as it is in the winter, but everything is slightly cheaper. You can also take advantage of the huge range of amazing outdoor activities like hiking, camping and mountain biking. You’ll be swapping sweaty nights in Moe Joe’s for lakeside BBQs and snowboards for bikes.

The bike park is the main reason people come to Whistler during the summer. If you’re still working for Whistler Blackcomb then your pass will continue to work throughout the year. If you’re not then a season pass is only $699 (£345). Alternatively, you can buy yourself a Twilight Season Pass which allows you to ride every evening, perfect if you’re working a full-time day job.

If you don’t want to risk breaking your neck in the bike part you can always head up as a sightseer. If you worked for Whistler Blackcomb during the previous winter then your season pass allows you up all summer as a foot passenger, even if you no longer work for them. You can spend hours exploring both mountains, the Peak 2 Peak is open as well as the Peak Express. It’s insane how different it looks without all the snow!

Believe it or not, you can even ski and snowboard right through summer. Once the mountains close for the bike park, it’s only a short amount of time before the Blackcomb Glacier opens. It’s open daily from 12 – 3pm and gives you access to two t-bars and a terrain park while you work on your tan. The Glacier Pass is $485 (£240) but keep in mind it’s a tiny area that’s mostly shut off for the summer camps. 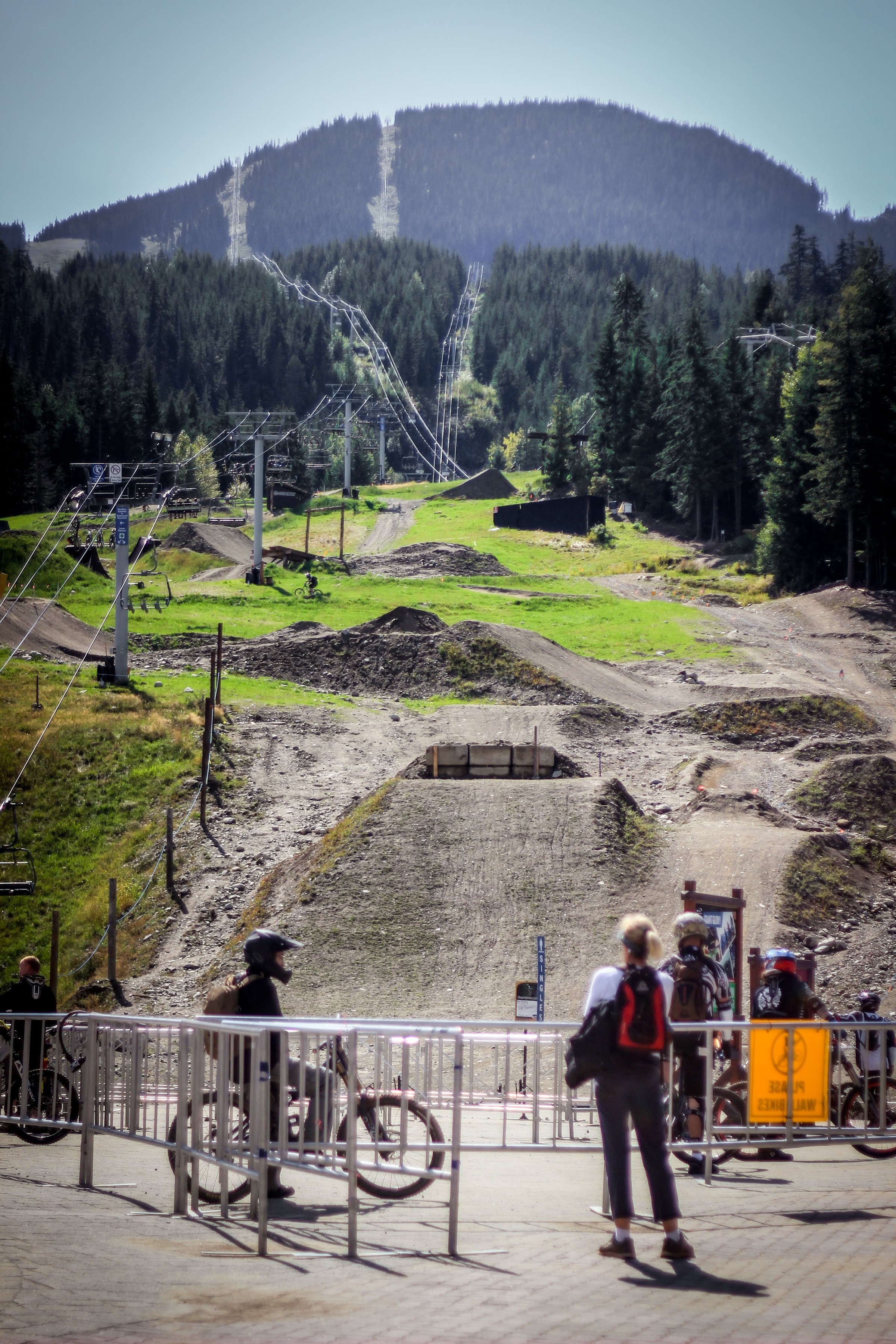 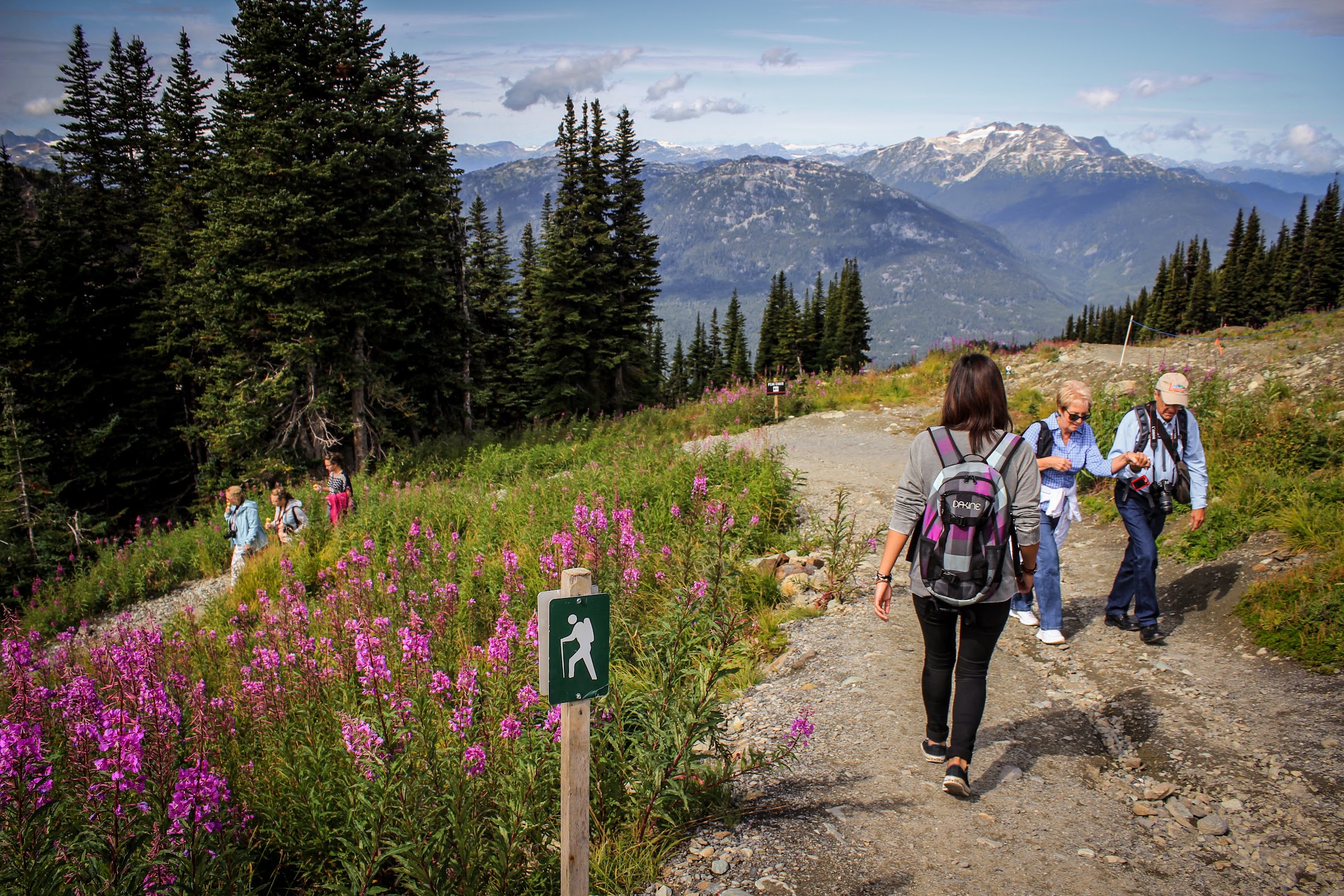 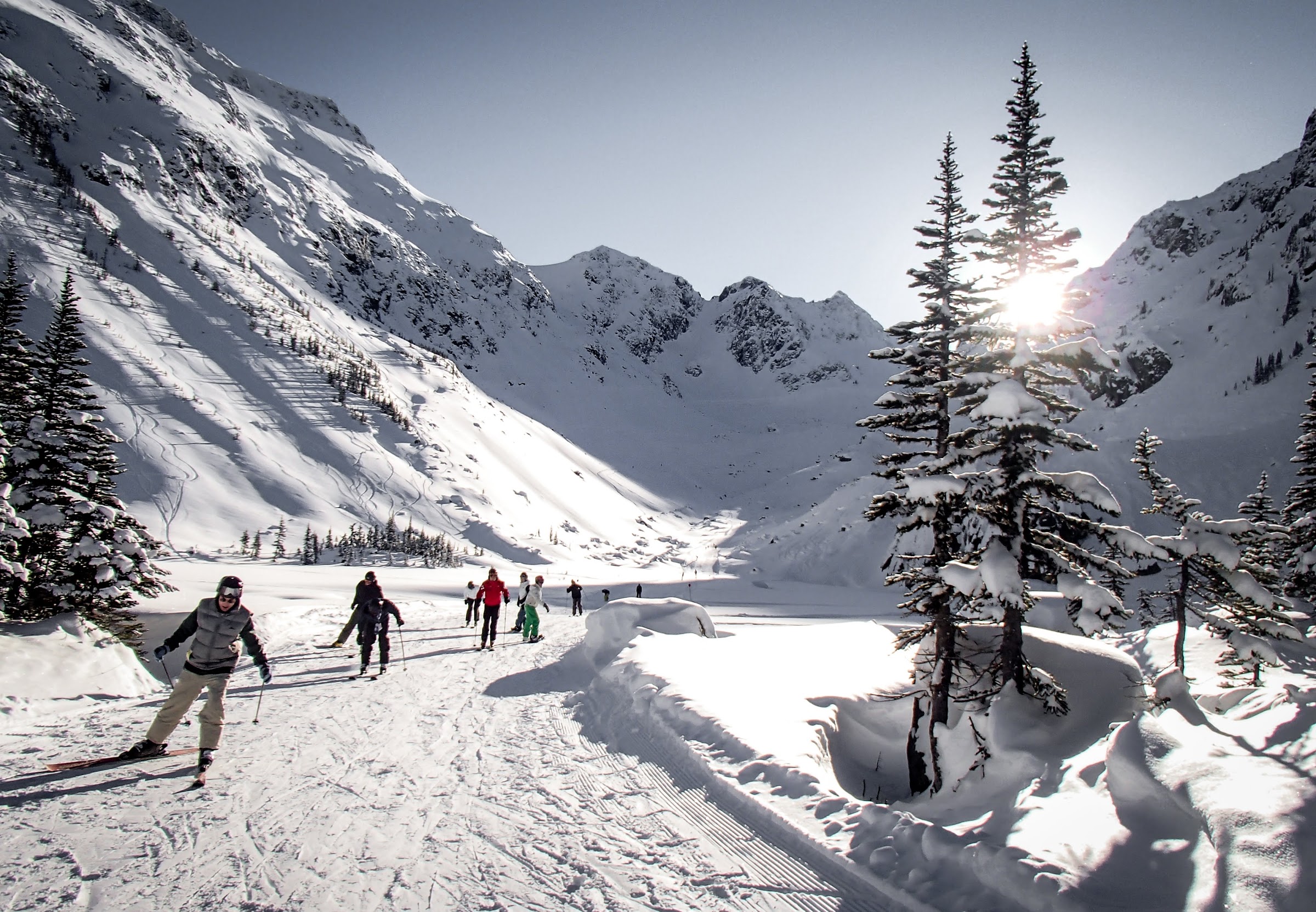 If you’ve spent the previous winter working for Whistler Blackcomb and living in staff accommodation then it’s about time you moved out, house prices halve during the summer. Alpine is a very popular place to live due to the huge houses that are much cheaper than those in the village and it’s only a 10-minute bike ride to town. Rainbow is a new estate built on the hill at the base of Rainbow Mountain, it’s closer to town with great views of the mountains. Emerald is even further out, but you’ll get the best prices for some massive houses.

The Valley Trail is the best way to get around during summer, once it’s all defrosted. You can walk, run, skate or bike from Emerald at the very top of the village, all the way down to Creekside at the very bottom. It’s mostly flat with a few big hills in certain places as it winds around the golf courses and lakes. Just watch out for bears. I’m not even kidding. They are everywhere in the summer. 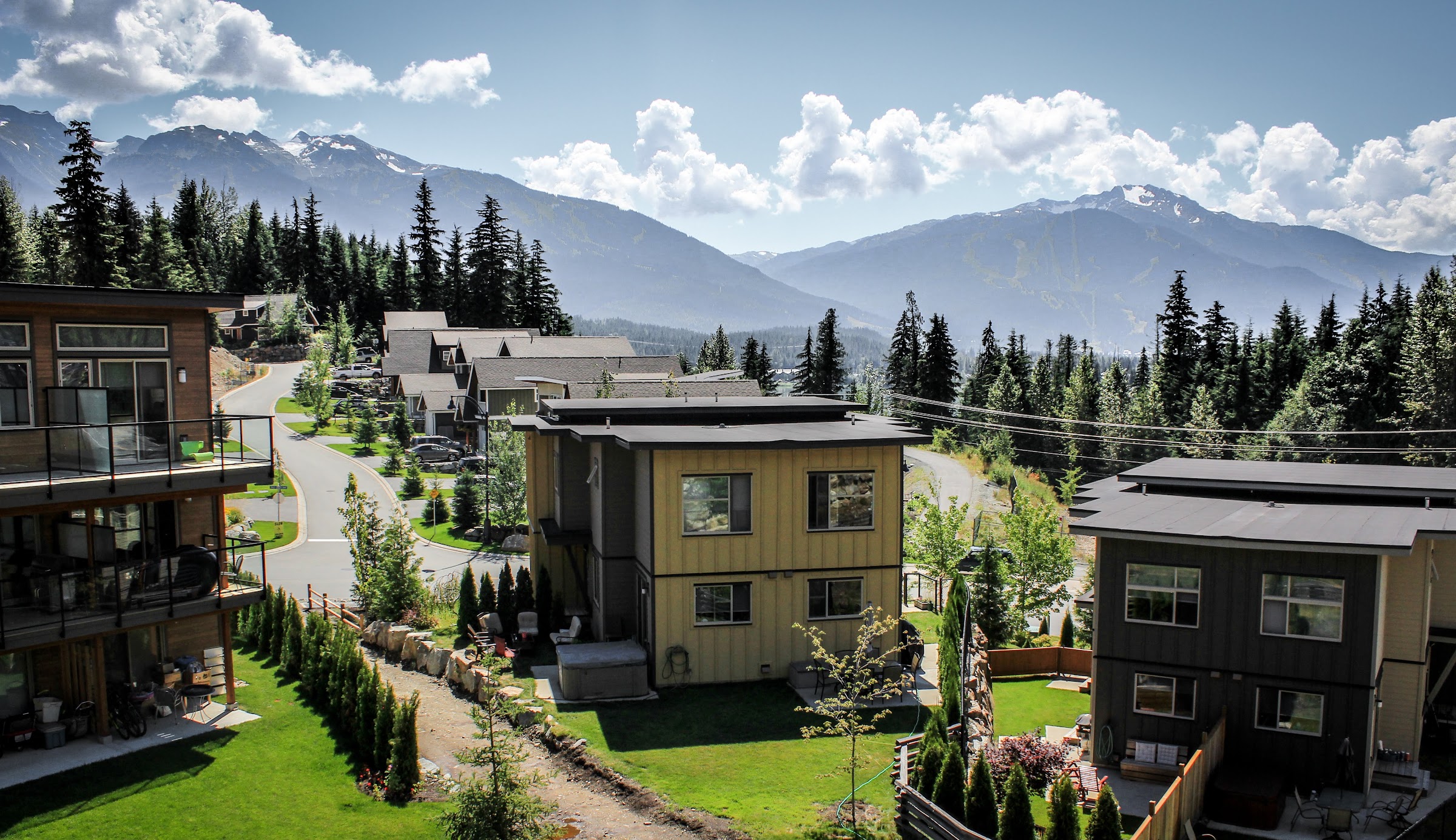 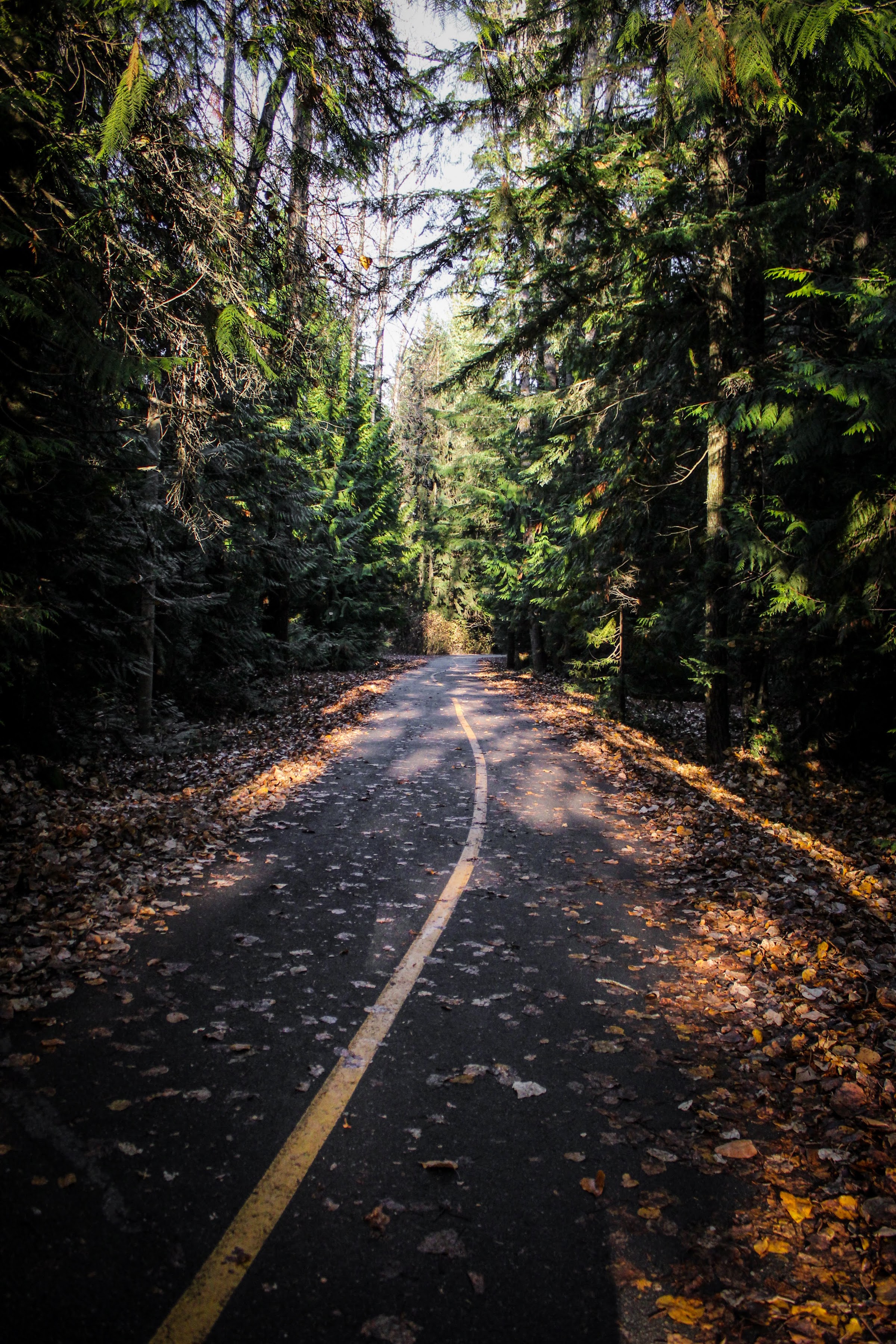 The highlight of the summer is spending lazy days by one of the many lakes around Whistler with a few beers and a BBQ. The closest one to the village is Lost Lake. It’s also the smallest, therefore the warmest and best for swimming. It’s surrounded by some great bike trails and there is even a frisbee golf course hidden in the hills.

One of the most popular is Alta Lake. It’s huge compared to Lost Lake, but still bearable to swim in. There is plenty of space to chill or play ball games and this is the starting point for anyone wanting to float the River of Golden Dreams. Buy yourself a $20 inflatable dingy from Walmart in Squamish or the Hardware store in the village, a 6 pack of beer and spend an hour floating slowly towards Green Lake. Make sure the water levels are high enough before attempting this!

The glacial Green Lake is the biggest of the three and by far the coldest. I rode past it every morning and afternoon on my way to work and it always looks different. Still and blue in the mornings, pastel green in the afternoons, completely frozen in the winter. You can follow the train tracks and make your way up to Green Lake Lookout, a short and easy hike that is very rewarding. It’s also the starting point for anyone rafting the grade III Green River. 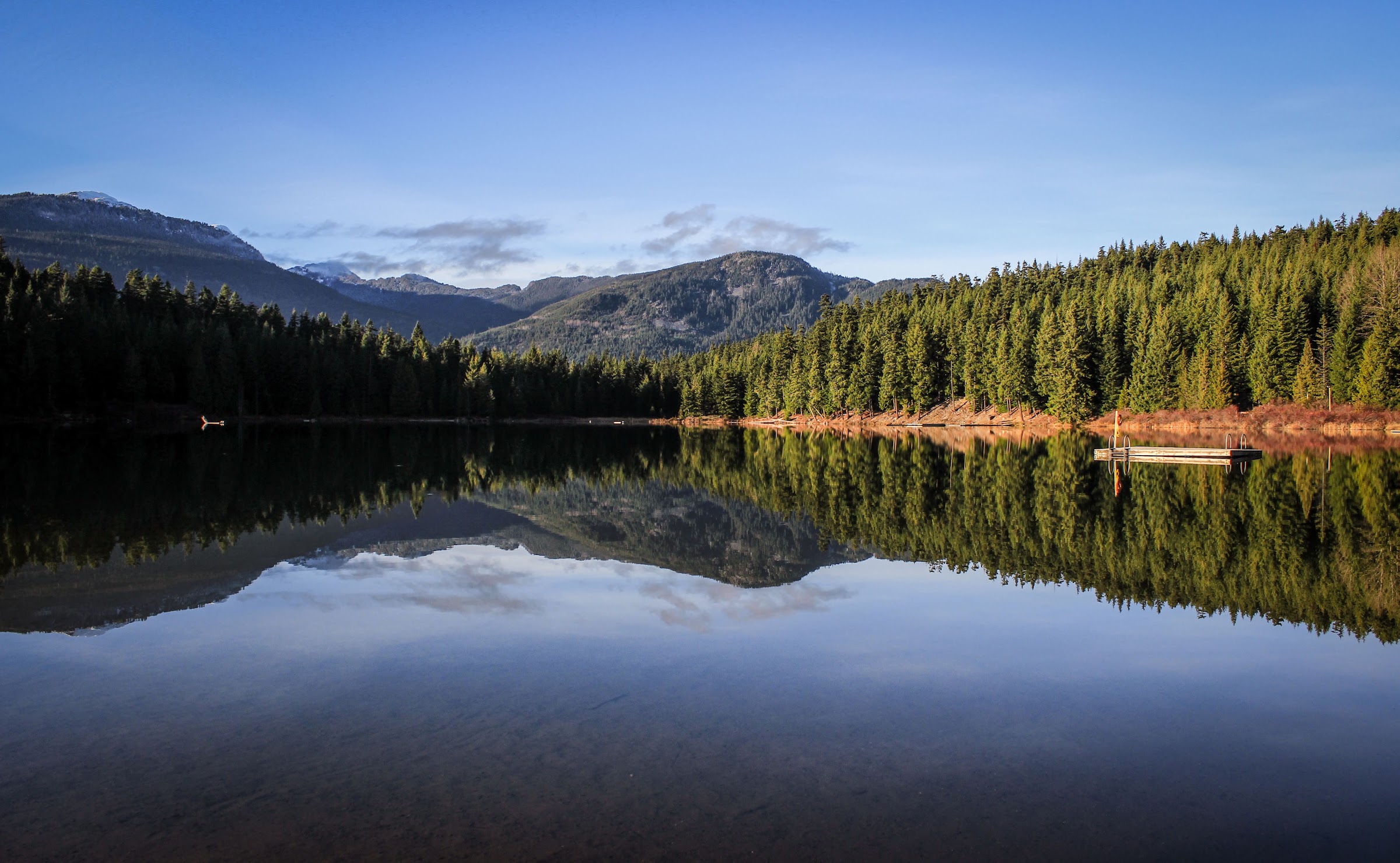 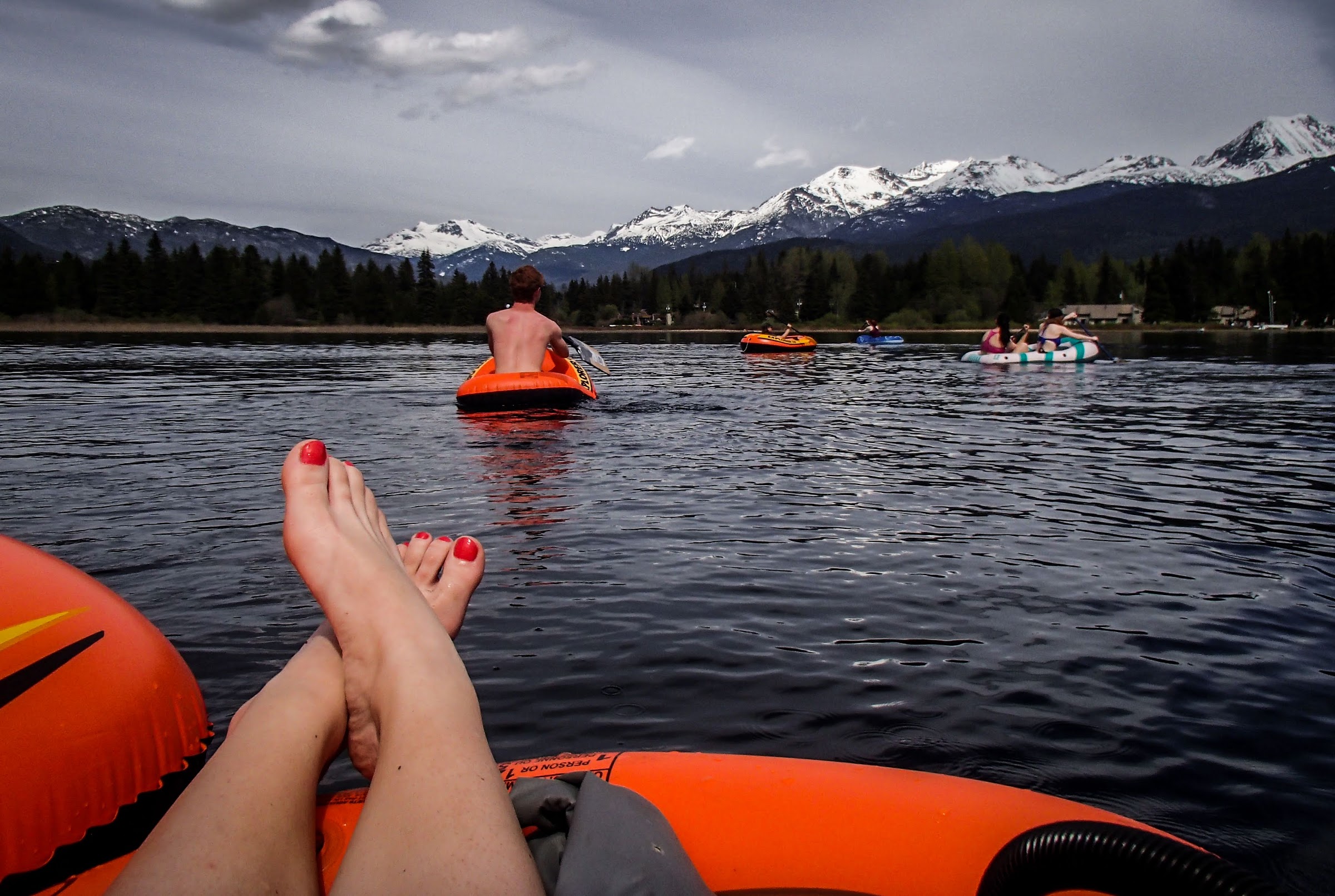 When you’re not on the mountain there are still plenty of things to keep you busy. Check out The Adventure Group, they offer a huge range of activities. You can soar between mountains on Canada’s highest and longest ziplines or you can climb through the trees in an obstacle course 80 feet above the ground.

You can ride an ATV to the top of a mountain, or snowmobile there in the winter. You can raft three different rivers; the easy Cheakamus River, the fun Green River or the raging Elaho River. TAG also offer heli-sightseeing, jet boating, mountain biking, hiking tours and trips to the Scandinave Spa, a must-do after any big day in Whistler.

I was lucky enough to work for TAG for the two summers I lived in Whistler and I can’t big it up enough. It’s a great team who really care about their guests and their job, and after any of the activities, you can’t help but feel like you’ve accomplished something great. They also throw the best parties!

Another good way to test your nerves is by throwing yourself off a bridge. Whistler Bungee is open all your round and costs $130 including a free pick up in the village. Once you’ve jumped once any extra jumps are only $80, making it about 6000% cheaper than jumping in New Zealand. You also get a free Whistler Bungee t-shirt and the option to buy your professional photos! 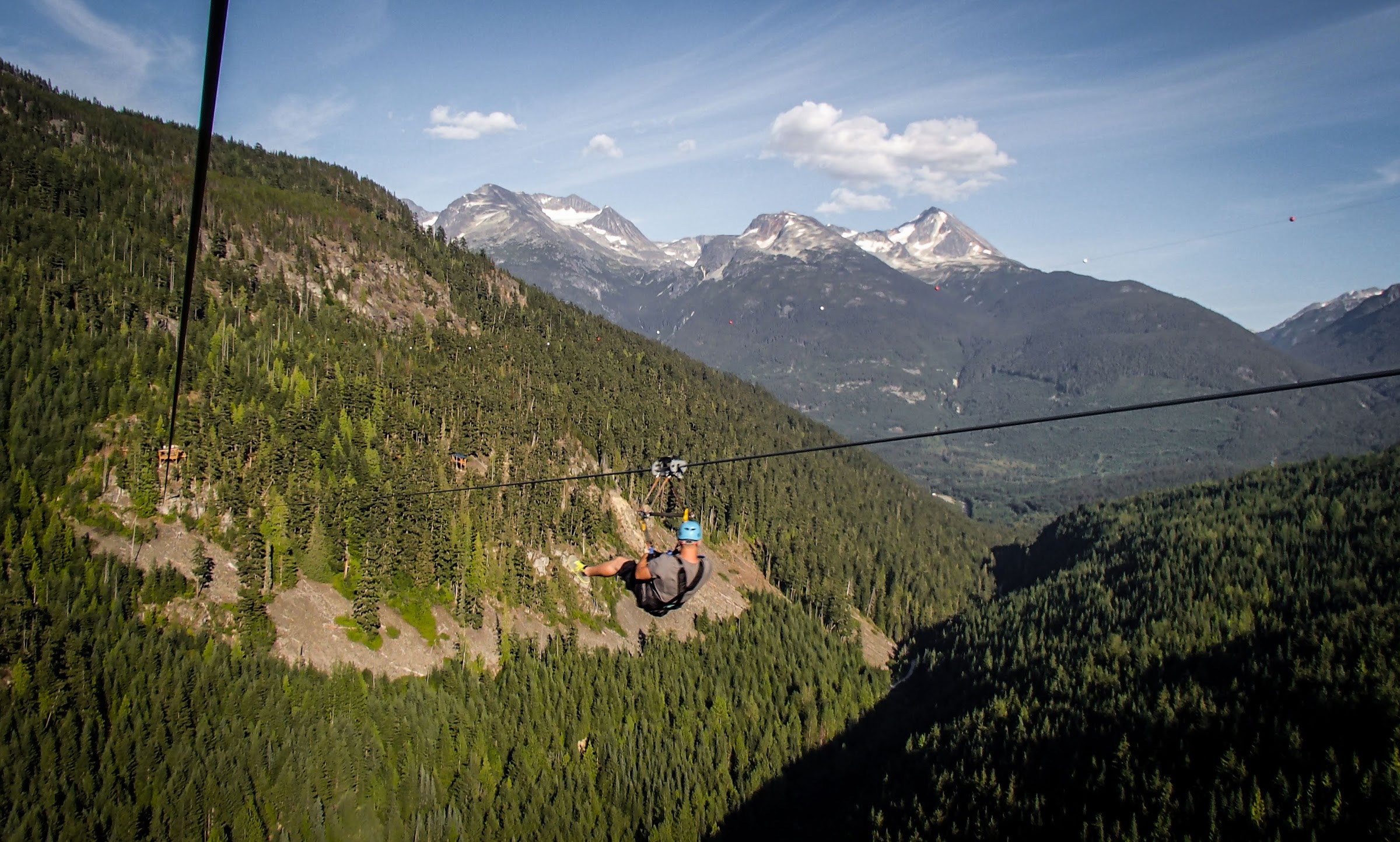 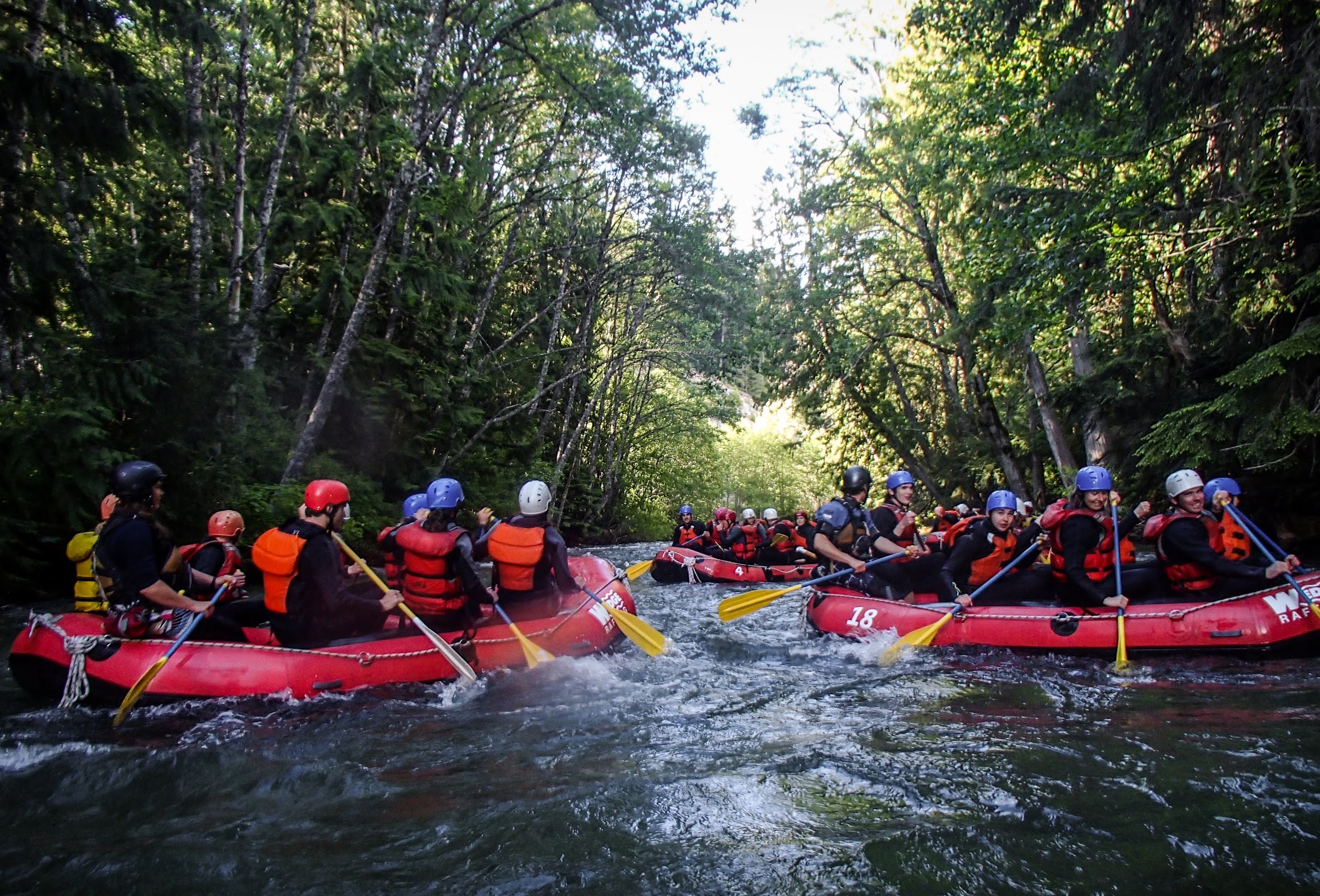 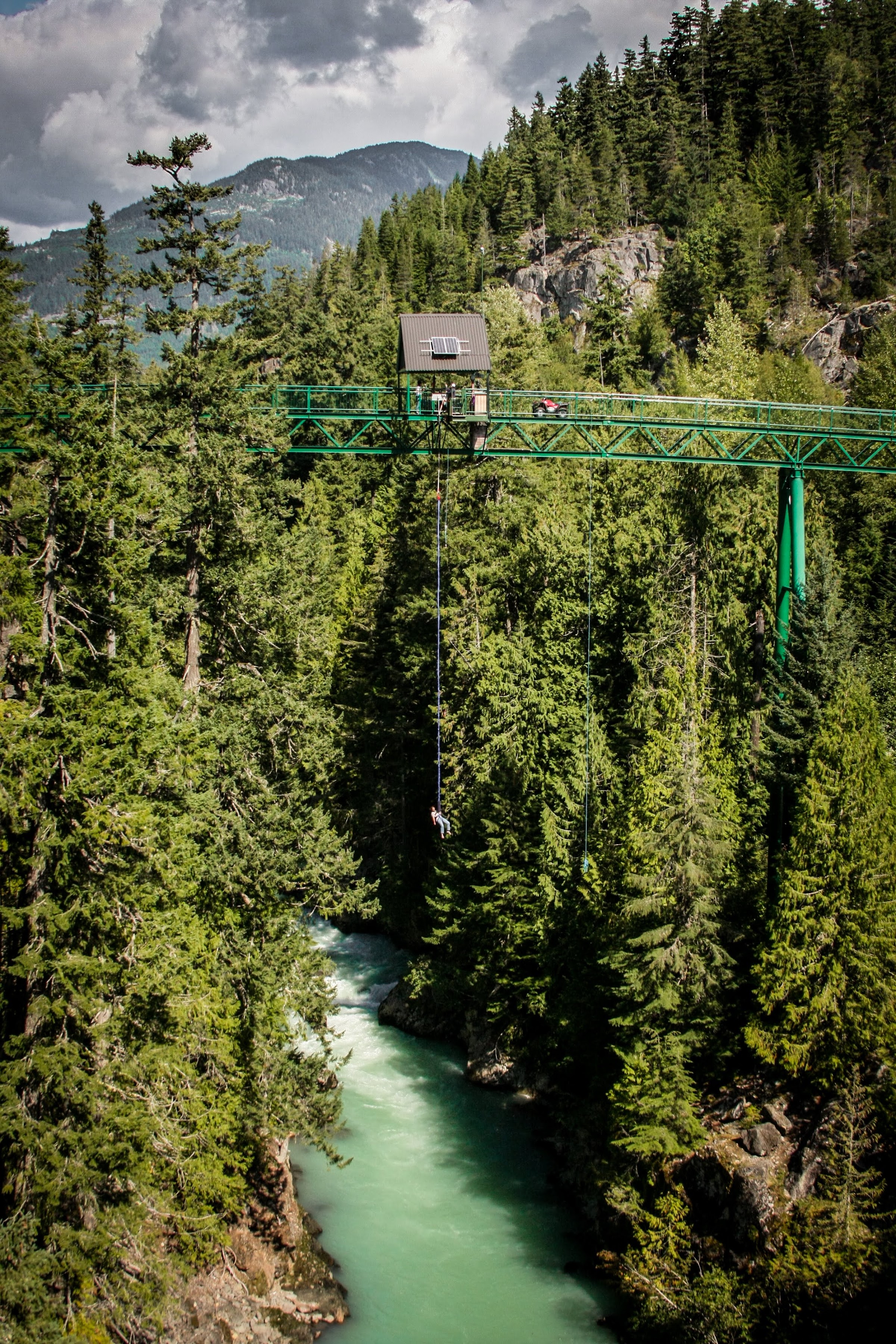