In a town like Whistler, the dead season is the worst season. You’ll probably be laid off from work, needing a new place to live and the village will be a ghost town. If you choose to stick around you’ll get first pick at jobs and rooms, but you’ll be painfully bored and spend all your money on rent and 20c chicken wings.

Or you could ignore all your problems and leave town for an epic road trip into the magnificent Rocky Mountains. It would be rude to spend so much time in Canada without seeing what lies outside of Whistler. Bigger mountains, bigger lakes, bigger towns. The drive itself is as amazing as the destinations. Public transport in Canada is expensive, slow and doesn’t give you an opportunity to stop along the way. Your best bet is to hire a car. Having drivers who are 25 or over will make it a lot cheaper. Gas is cheap compared to England and the roads are big, well sign-posted and fun to drive, even if it does take you 16 hours to get anywhere.

This was our route: Whistler to Canmore, Canmore to Banff, Canmore to Jasper, Jasper to Kelowna, Kelowna to Vancouver. 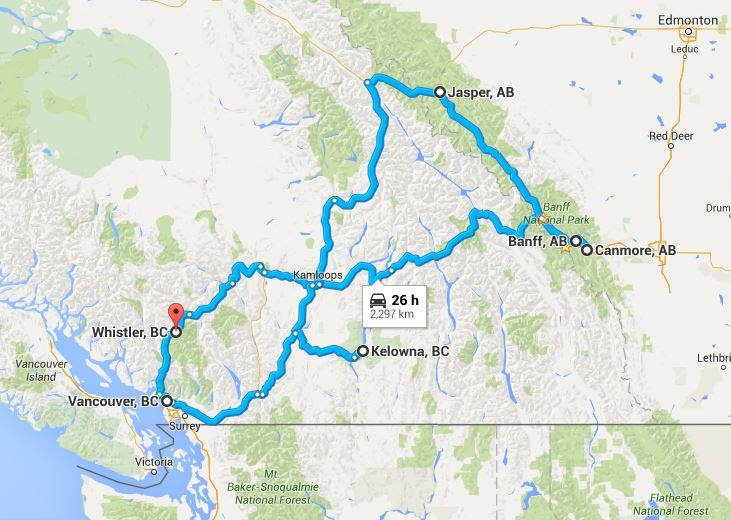 Meet Babs. Our bad-ass rental car (after a free upgrade). Babs was the best. Once we realised we had only driven about 10% of the way to Canmore in 3 hours we put the pedal to the metal and motored our way through the beautiful rolling hills of the Okanagan, overtaking all the trucks and listening to cheesy music. Eventually, we arrived in Canmore and settled down for the night. The Canmore skyline is dominated by dramatic, jagged peaks. The most famous are the Three Sisters, known individually as Big Sister (Faith), Middle Sister (Charity) and Little Sister (Hope), shown in the first photo below. It’s a short and scenic drive to Banff.

Compared to Whistler, Banff seems quite big. There is more than one main street, with plenty of shops and reasonably priced bars, things are affordable! There are three fantastic resorts to choose from during the winter – Mt. Norquay, Lake Louise Ski Area and Sunshine Village. A 5-day pass, mid-season, pass only costs $400 for all three areas, compared to Whistler Blackcomb at $600. If you do have your own car then this scenic loop is a must. As you leave town your first stop is the beautiful Two Jack Lake. Backed by jagged mountains, still partly frozen, it’s a great place to stop for a picnic. You then follow the road along until you reach the shores of the absolutely stunning Lake Minnewanka. It was still frozen in April and if you’re brave you can walk out onto the ice. There’s a little side trip you can make to the peaceful Johnson Lake and to visit the Hoodoos, stacks of hard rock left over after softer rock eroded. This drive is known as one of the most scenic in the world. Give yourself a full day to allow for every short walk and photo opportunity, because it really is incredible.

The Bow Valley Parkway is the road from Banff to Lake Louise. The first point of interest is a short walk through Johnston Canyon, definitely worth doing, even when it’s covered in ice and slippery as hell. You’re rewarded with a hilarious and scenic walk along the river that runs through it.

The big draw for people coming to Alberta is the famous Lake Louise. Turns out April is a bad time if you want to see turquoise water and green forest, it’s completely frozen and covered in snow. It’s still beautiful, and the Lake Louise Fairmont Chateau looks like a fairytale castle.

The road from Lake Louise to Jasper is known as the Icefield Parkway. It’s a journey through mountain wilderness and ancient glaciers. One of the highlights is taking the Ice Explorer truck onto the Athabasca Glacier. You can then stop at the gorgeous Athabasca Falls, before ending your journey in Jasper. There are 3 things I noticed about Jasper. It’s beautiful, alcohol is very cheap, and there are a lot of deer. Do not annoy the deer. We stayed in the HI-Jasper in a huge dorm room and spent our evenings eating, drinking, and playing Pass The Pigs.

You need to set a day aside to explore the massive Jasper National Park. If you have the time you can take on any of the trails that take you deep into the mountains. If you’re short on time I would recommend a walk around the beautiful Edith Lake. Another highlight was the short trail that winds through the forest above the impressive Maligne Canyon. In April, every waterfall was frozen solid, I can imagine it’s even more amazing during the summer when the turquoise water is rushing through. It’s definitely worth a visit at any time of year!

Maligne Lake is another famously beautiful spot… in the summer when the sky is clear, the water is blue and the forest is green. In April, it’s also completely frozen and covered in snow. It’s still lovely… but I couldn’t help but be a little disappointed. I want that typical photo taken in a canoe. Day 5 and 6: Jasper to Kelowna and Kelowna to Vancouver

The drive to Kelowna from Jasper is another long stint so get up early if you want to make good time. We stayed in a roadside motel, got ourselves a free room upgrade to a two-story apartment and spent the night in the pool after a fantastic dinner by the water.

The drive to Vancouver is as beautiful as the rest. It also went from cloud to snow to sunshine to rain in the space of a few hours. Vancouver is brilliant. We crammed 8 of us into a two-bed hotel room and spent a day exploring, starting with a hilarious rollerblading adventure around Stanley Park and a few hours in the Vancouver Aquarium. I hope this has inspired you to ditch the depressing dead season and head out on your own road trip. It was a great experience with plenty of amazing and ridiculous group photos to show for it!