This tiny island off the coast of Belize is a backpacker’s paradise, which means it’s basically ‘the cheap one’. Just because it’s budget-friendly, doesn’t mean it’s rubbish. Spend your time eating great food, kayaking with a beer and snorkelling with sharks!

Getting to Caye Caulker from Mexico

It was a sad day when I had to leave Mexico. The weather had been great, the people were so friendly, the food… oh my god the food… everything was cheap, we had nice hostels, the transport was easy, the beaches were beautiful, the diving was amazing, I could go on.

But with an outgoing flight in two and a half months from Panama City way in the south I had to get a move on, to Belize. Now, Belize to me always seemed like one of those luxurious destinations that you only dream of going. I found out that this is, in fact, not true. I’m sure if you went to the right spots and came during the dry season when the sun was shining you could find that slice of paradise. As it were, we arrived under a grey sky to an almost empty Caye Caulker.

First thing in the morning we caught an ADO bus to Chetumal, when I could barely move for being so sick, and dragged my sorry self through the tedious and expensive border crossing process.

Just FYI, you do not need a visa for Belize, and you do not need to pay to leave Mexico. However, the border guards are very corrupt and will charge you anyway, with smiles on their faces. We had to pay US$25, if you don’t have the cash they will take you to an ATM. They probably won’t let you get on that boat without paying. 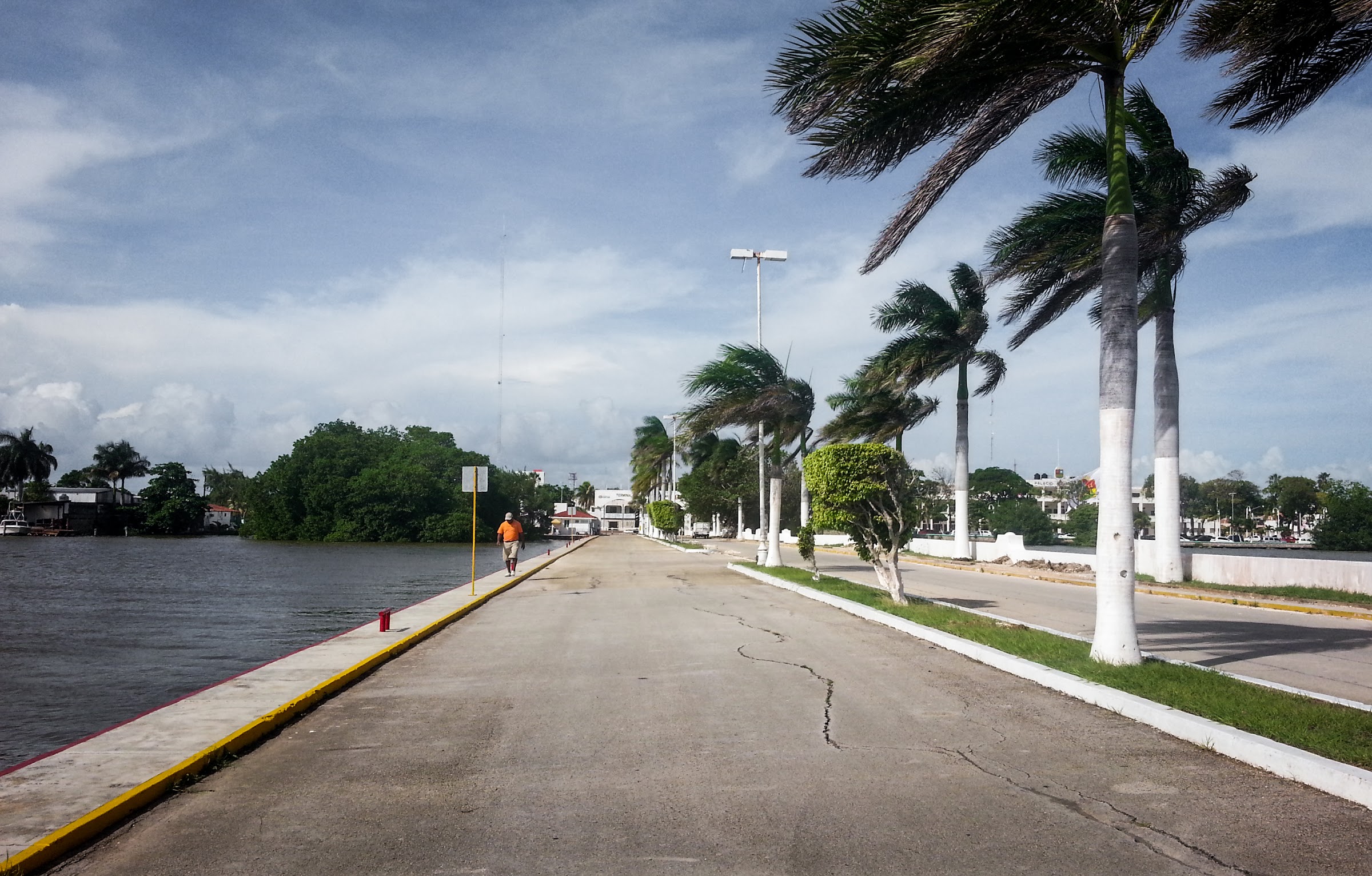 The boat ride to San Pedro was hell… long and very, very rough. After being offloaded onto the dock, told to sit and wait for an unspecific amount of time, and being loaded back onto another boat we finally arrived, late at night, to our island home for the next week.

We were whisked off to the Chinatown Hotel, a surprisingly nice place with an ensuite, TV, and AC for a reasonable price, or so we thought, it’s always difficult judging the price of things when you first arrive into a new country.

The next day was spent exploring the island. It’s tiny, only 8km long and only 1.6km wide, you can explore the whole town in an hour. The dusty roads are lined with brightly coloured houses and restaurants serving amazing (and cheap) Caribbean food.

The locals will shout at you if you’re not relaxed enough, so don’t walk too fast. You can follow the main road all the way up to The Split, a great place to swim between two islands with a bar and restaurant to keep you entertained and/or drunk.

There is little to do around the island other than eating, drinking and swimming at the split. You can rent kayaks and snorkels but the good snorkelling is 1.5km offshore. There is also an outdoor cinema which is great if you like the feel of cockroaches caressing your skin. 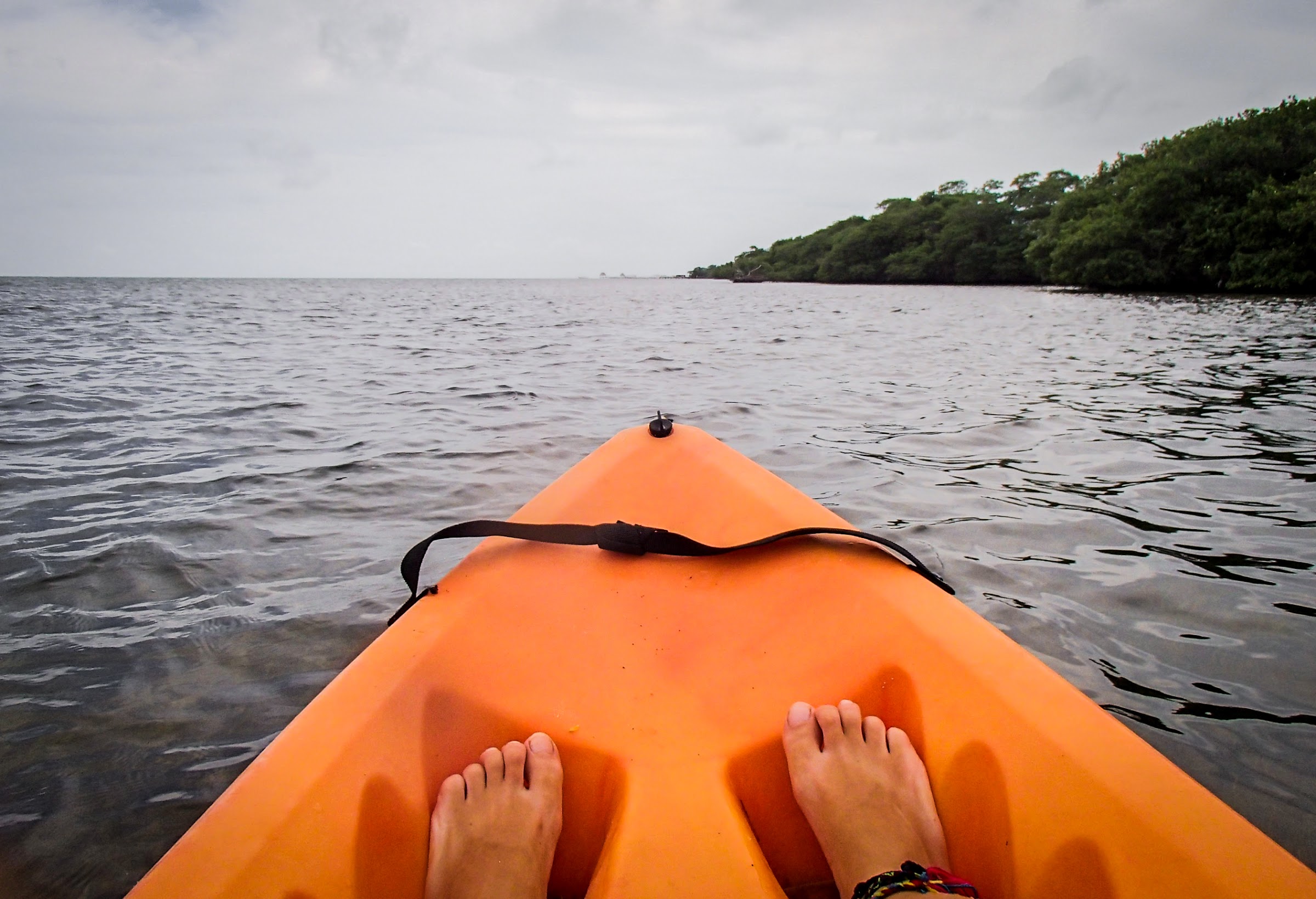 Diving and snorkelling around Caye Caulker

The most obvious dive spot to hit while in Belize is the Blue Hole, one of the seven Natural Wonders of the World. I had my heart set on doing this, but I didn’t realise it was going to cost $250, so much more than any diving I’ve seen before. I could just about afford it, but was warned by many people that it was not worth it; you’re taken to the edge of the hole, you dive down into blue water with nothing much to look at, and then before you know it you’re back on the surface.

There are still some breathtaking dive spots you can explore instead of this, the Belize Barrier reef has plenty to choose from; Glovers Reef, Placencia Reef or Turneffe Lighthouse Atolls are the best.

After drowning my regret with a bottle of rum I decided to treat myself to a (still very expensive) snorkelling tour, which turned out to be a lot of fun. We saw a whole bunch of rays, turtles and nurse sharks, so I can’t help but feel it was a good substitute for a boring old Blue Hole dive (I only say this so I don’t feel as much regret).

There are a ton of places around town that offer these snorkelling tours. Most of them offer exactly the same thing, as you’ll find out when your swimming among 50 other people trying to remember which boat you’re supposed to be on. They all cost around $50 – $70 which is a lot, but hey, what are you gonna do about it?

We booked with EZ Boys tours. Ours was a sailboat, which is a bad idea because while all the other boats were motoring their way towards the Hol Chan Marine Reserve, we were going along at zero knots per hour because there was zero wind. We weren’t even allowed the free margaritas until our return journey. However, the snorkelling was amazing. Our first spot was Loggerhead Paradise, so-called for the boats that dump conch shells overboard which attract loggerhead turtles, stingrays, and even baby nurse sharks! A lot of people were trying to touch the marine life. Don’t do that. Don’t be that guy. Fish are friends, not things to take a selfie with.

Our second spot was the Hol Chan Channel, where we followed our guide while he pointed out moray eels, turtles, eagle rays, pufferfish and a slightly bigger, scarier nurse shark that was following us quite closely. It was much quieter here and I really enjoyed it!

Our last spot was Shark Alley. Guess what we saw there? Sharks. SO MANY SHARKS. I had no idea that nurse sharks could grow as big as they do. They were swarming around the boat as the captain threw shark bait overboard. They were in a frenzy. People were getting all up in their business and it was slightly terrifying. I’m pretty sure one of them was sizing me up. Didn’t get eaten though, so there’s that. Back on the boat, with the wind in the sails and a margarita in hand, we slowly made our way back to Caye Caulker. Overall, it was a great day and Caye Caulker is a great island. So chill. But I needed more sunshine… I was missing Mexico!

Have you been to Caye Caulker? How was your experience with diving and snorkelling there? I would love to hear about it in the comments section below!