The perfect waves, the sunsets and the chilled out vibe are the three things that stand out most about El Tunco. This small beach town on the coast of El Salvador is becoming a popular stop on the backpacker route and definitely shouldn’t be missed if you want to relax for a week (or four).

To get here from Guatemala you can catch the chicken buses through various towns which will be a great adventure and cost you about US$10. Unfortunately, I ended up getting suckered into another tourist minibus from Antigua, albeit a fast and air-conditioned one, that cost me US$32. The tiny main street is lined with hotels and restaurants for every budget. There are some great places along the beach but the cheaper options are on the two streets at the end of town that leads away from the surf. The road that leads to the beach has the best options for food, be sure to have a late-night pupusa – a thick corn tortilla filled with cheese and meat, it’s the best drunk food ever.

We spent a couple of nights at Hostel Solymar, basically someone’s house converted into rooms with a shared bathroom outside. We ended up moving to the much nicer Posada Luna which gave us a private bathroom and a pool! It was the perfect place to relax for a week, and only a minute walk to the beach. Playa El Tunco is a long, pebbly beach lined with palm trees and bars full of tourists, the sand is black and gets extremely hot during the day. It’s safe enough to swim but there is a strong current so be aware of where you’re going. The surf is great for any level and you can hire a board for around US$12 with an hours lesson costing around US$15.

The beach is the best place to watch the sunset and it’s always breathtaking. The sun slowly sinks behind the horizon as the surfers catch their last waves under the bright red sky. We came down to watch it every night before strolling back to town to grab dinner and a cold beer. If you need a break from the beach then walk to the highway and catch the chicken bus to Tamanique, or do what I did and do what everyone told you not to: hop in the car with a friendly old man who speaks a little English and drives you there for free.

Once you’re in the small town of Tamanique then you’ll need to find yourself a guide. We asked around, got taken to a few different houses with no idea what was happening and ended up following three young boys with machetes into the jungle.

I’m not gonna lie, I was about 98% sure we were about to be robbed at knifepoint, especially because we had our cameras on us, but after a very hot, dusty and difficult hike down the mountainside we came to the first of the falls.

We spent hours jumping off different points, swimming in the unbelievably refreshing water and taking selfies of us and the boys. We had such a good time with them even though they spoke no English and we spoke a minimum amount of Spanish. The first waterfall is pretty small, even I managed to jump in there!

The second waterfall is bigger than the first and is still safe to jump into but you really do need some balls of steel, it’s a high jump off the cliff into a tiny pool under the crashing waterfall. You can perch on a ledge at the top of the third fall before hiking down the most difficult part of the trail and cooling off in the pool at the bottom.

They showed us a different route back to the town which was pretty difficult and I would not recommend any of this in flipflops, but maybe that’s just because mine were broken. Take water and snacks, pack your GoPro and go on an awesome adventure where you can meet the locals, learn some Spanish and prove you’re not afraid of heights! Don’t forget to bring US$5 – 10 so you can tip your ‘guides’ at the end of the day. 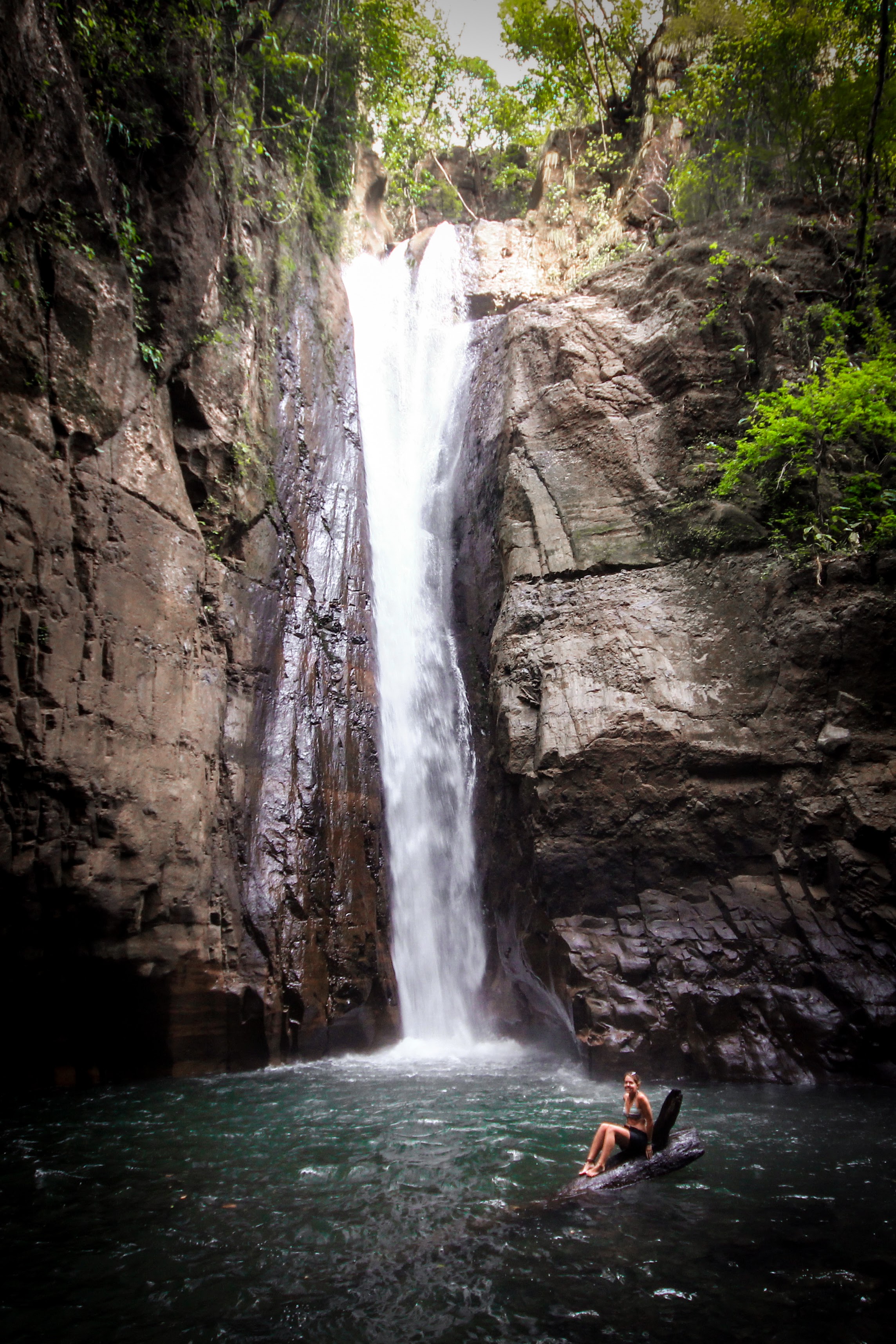 If you’re heading into Honduras then it’s easy enough to pay US$70 for an air-conditioned minibus to take you to the capital of San Pedro Sula, or you can use local transport and save yourself $53.50.

Walk to the highway and catch any bus going to San Salvador, the minibus that picked us up cost $3. From there it’s a $2.50 taxi ride to Terminal Oriente, and the bus to the border town of El Poy was another $2. The border crossing was simple enough, with no fee, and we hopped in a shared taxi to the town of Ocetepeque for $1 each.

The local bus to San Pedro Sula was $8. This was the part that we were nervous about – we were arriving into the murder capital of the world at night with no hostel booked, halfway there our bus was pulled over and searched by armed guards while the men were taken off to be patted down. In the end, we had nothing to worry about, we simply hopped in a taxi to a hostel surrounded by barbed wire, but be careful and leave El Tunco as early as possible. 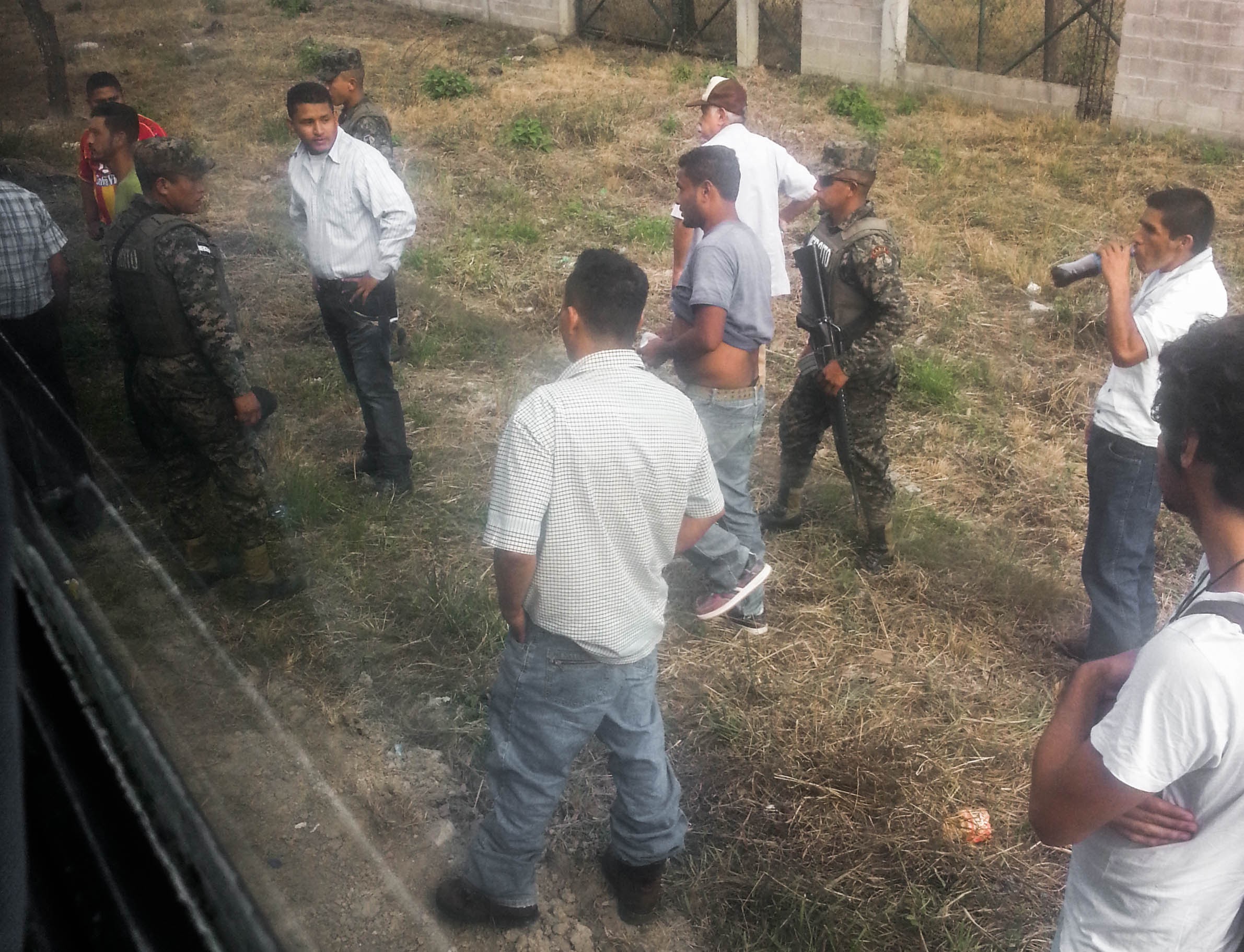