After spending a week in Addis Ababa acclimatising to the culture (and altitude) it was time to leave the city in search of adventure. Our destination was the UNESCO World Heritage site of Harar, located northeast of the capital near the border of Somalia. Our goals were to get lost in the winding streets, visit the ancient gates and meet the Hyena Man.

Our first day (my 28th birthday!) started early with a hair raising taxi drive to Bole International Airport, feeling all too sorry for ourselves after a party the night before. Our 7am flight from Addis took an hour to arrive at Dire Dawa, the closest city to Harar. If you’re catching a taxi or meeting a tour guide then you’ll need to exit the airport and head to the main road as they aren’t allowed to enter the gates. We met our guide Ashenafi and hit the road.

The drive to Harar from Dire Dawa takes around an hour and passes through villages, a large chat market (a local drug) and up winding mountain roads with spectacular views. You’ll drive through the new city of Harar and then into the old one with just one road running from gate to gate, the rest is made up of winding streets which are almost impossible to navigate without a guide.

We stayed at Anisa Abdella Guesthouse, a big blue building with high walls surrounding the courtyard, tucked away next to Jumma Mosque. The family welcomed us and we dumped our bags, ready for the day. Some tours will have you stay here because it’s a cultural experience in itself, but some will take you to a regular hotel and you’ll visit the Cultural Museum instead, both are very similar. 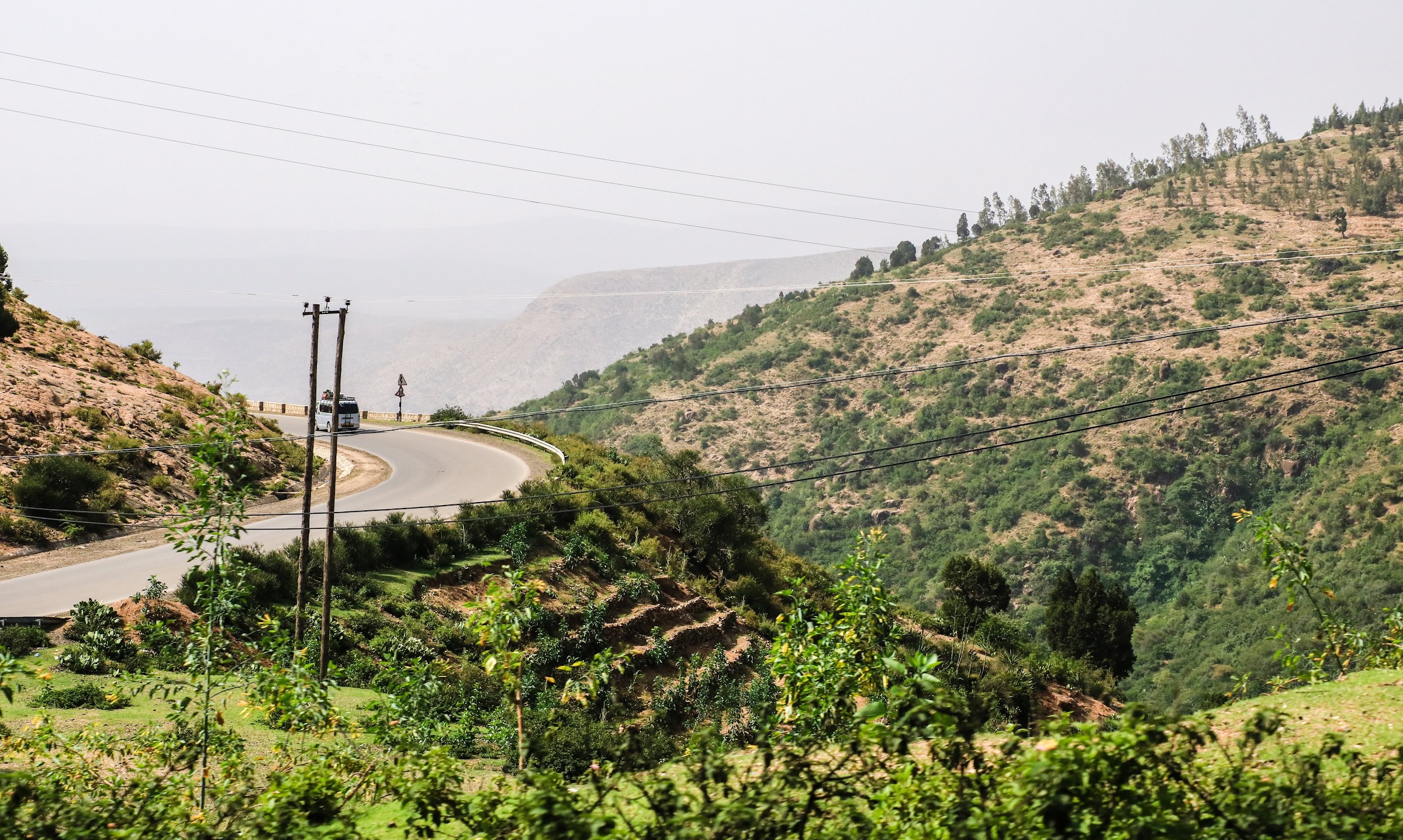 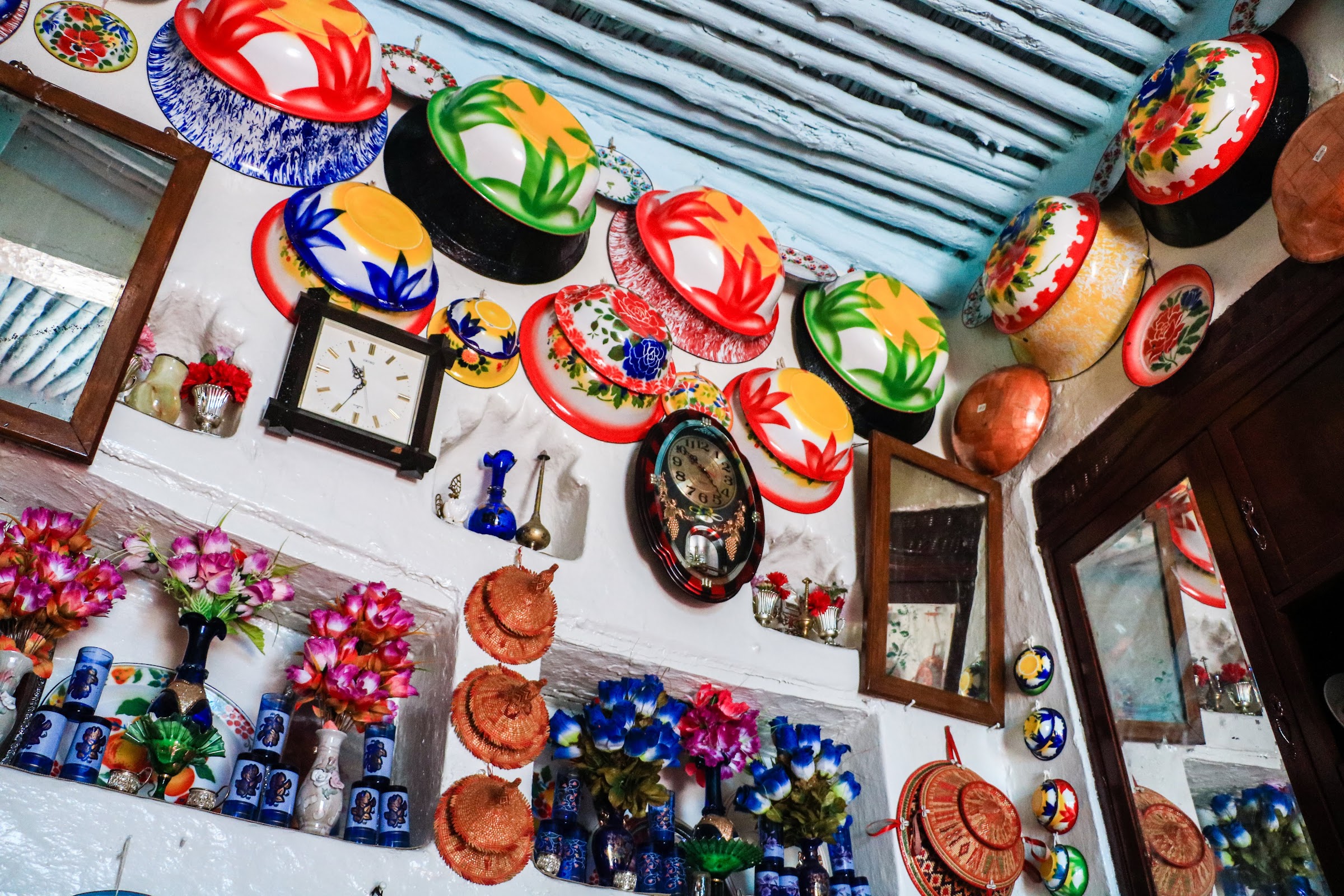 After walking through the Mekina Girgir, a street of male tailors on their sewing machines, our first stop was the house turned museum of the French poet Rimbaud, filled with books, photographs and poems from his time living here, although it’s said the house that stands now was built after his death. Regardless, it’s a beautiful 3 story building with stunning views from the top floor.

Our second stop was the Indian influenced palace of Ras Mekonnen. It was restored in 1970 as a museum and opened by Emperor Haile Selassie. Formerly known as Ras Tafari, this man is revered as the returned messiah among those who follow the Rastafari movement. Who knew that this religion developed in Jamaica started with the king of Ethiopia? 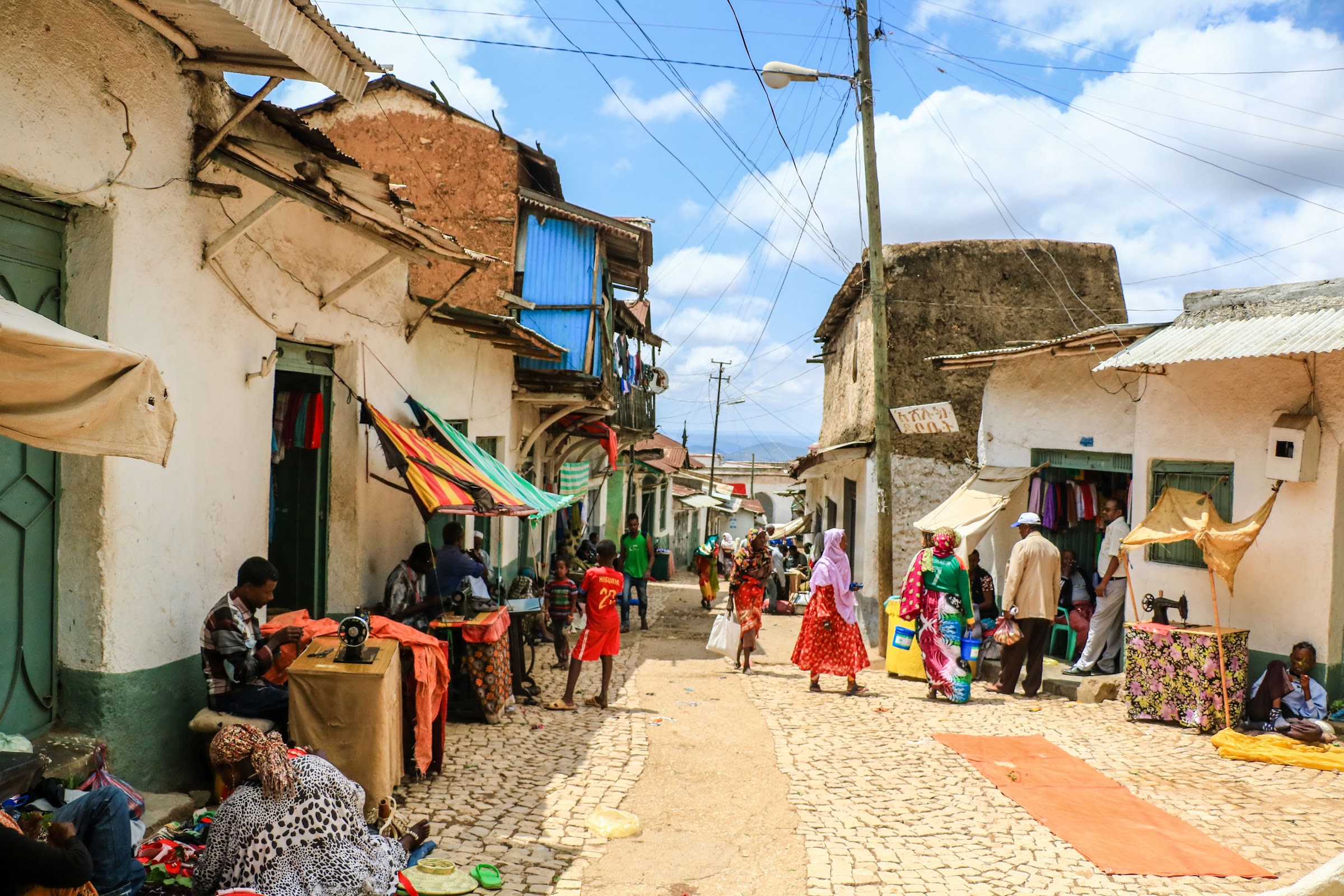 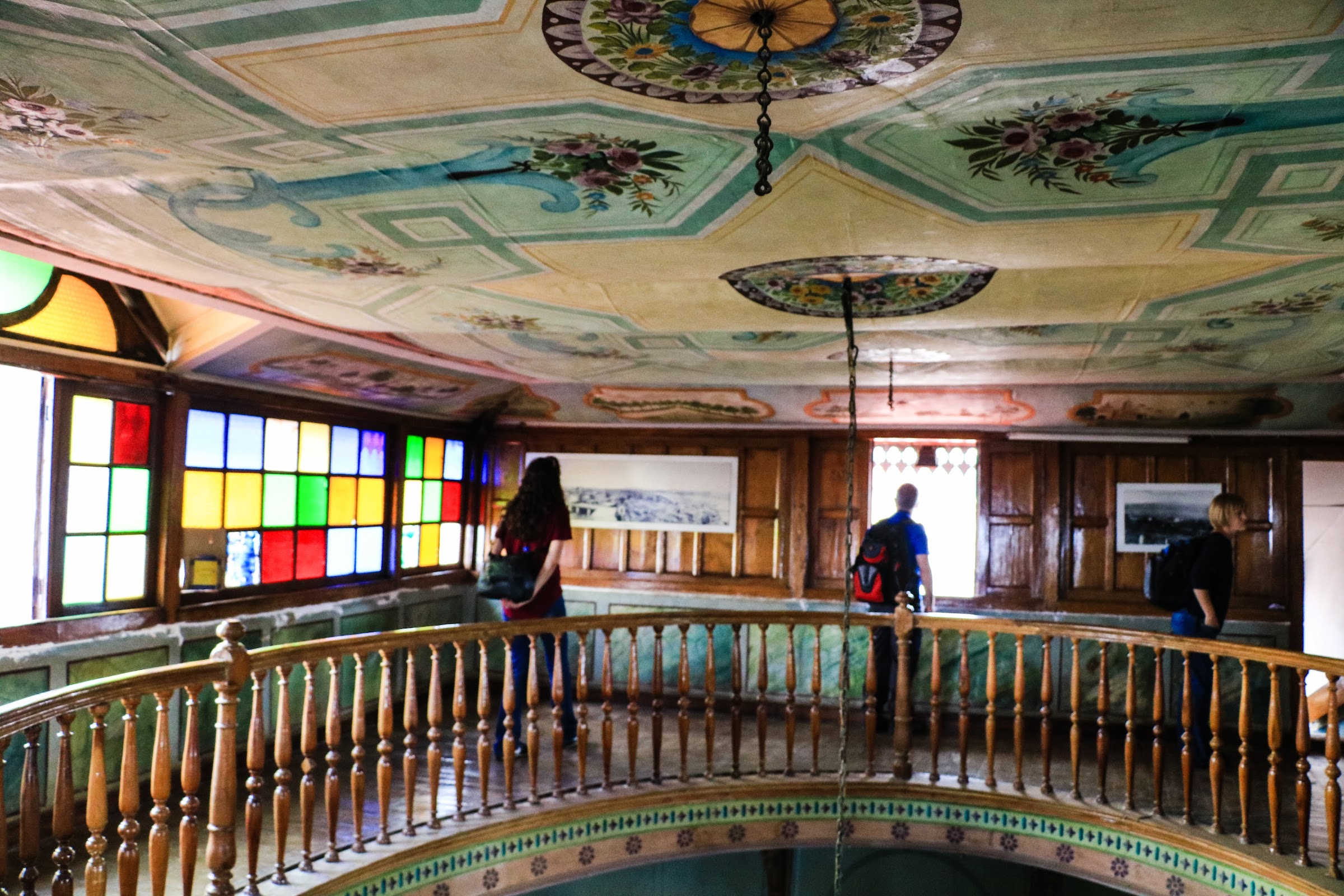 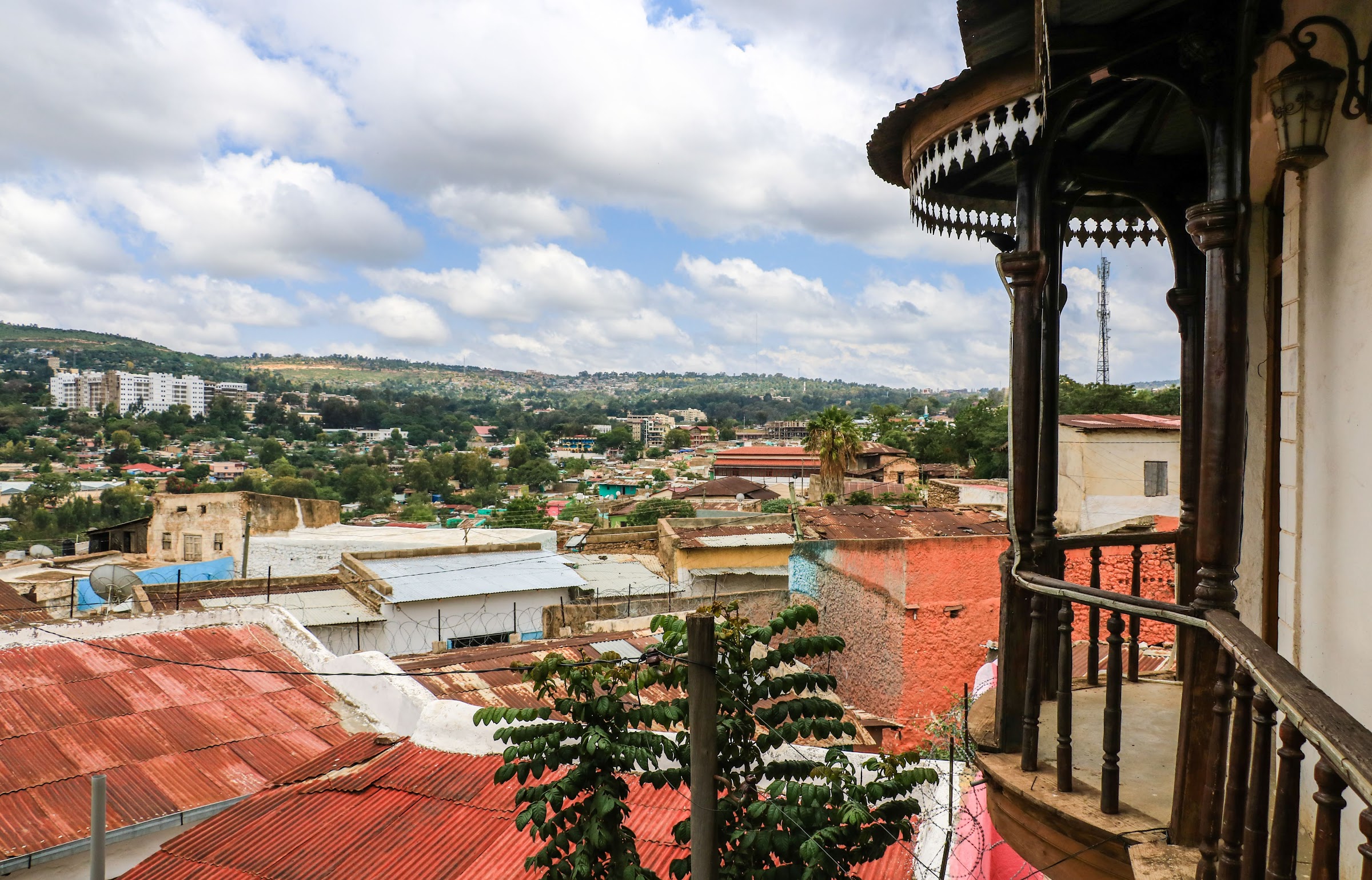 At this point in our day, we were exhausted and dying for a nap, but our guide took us to his brother’s house for a surprise. He had bought me a birthday cake! His sister-in-law dressed me in a traditional Harar dress and everyone sang Happy Birthday, it was lovely. Then it got a little weird… they left us in the living room watching local TV while they disappeared to smoke sheesha and chew chat. We had to ask to leave so we didn’t miss the highlight of the trip. 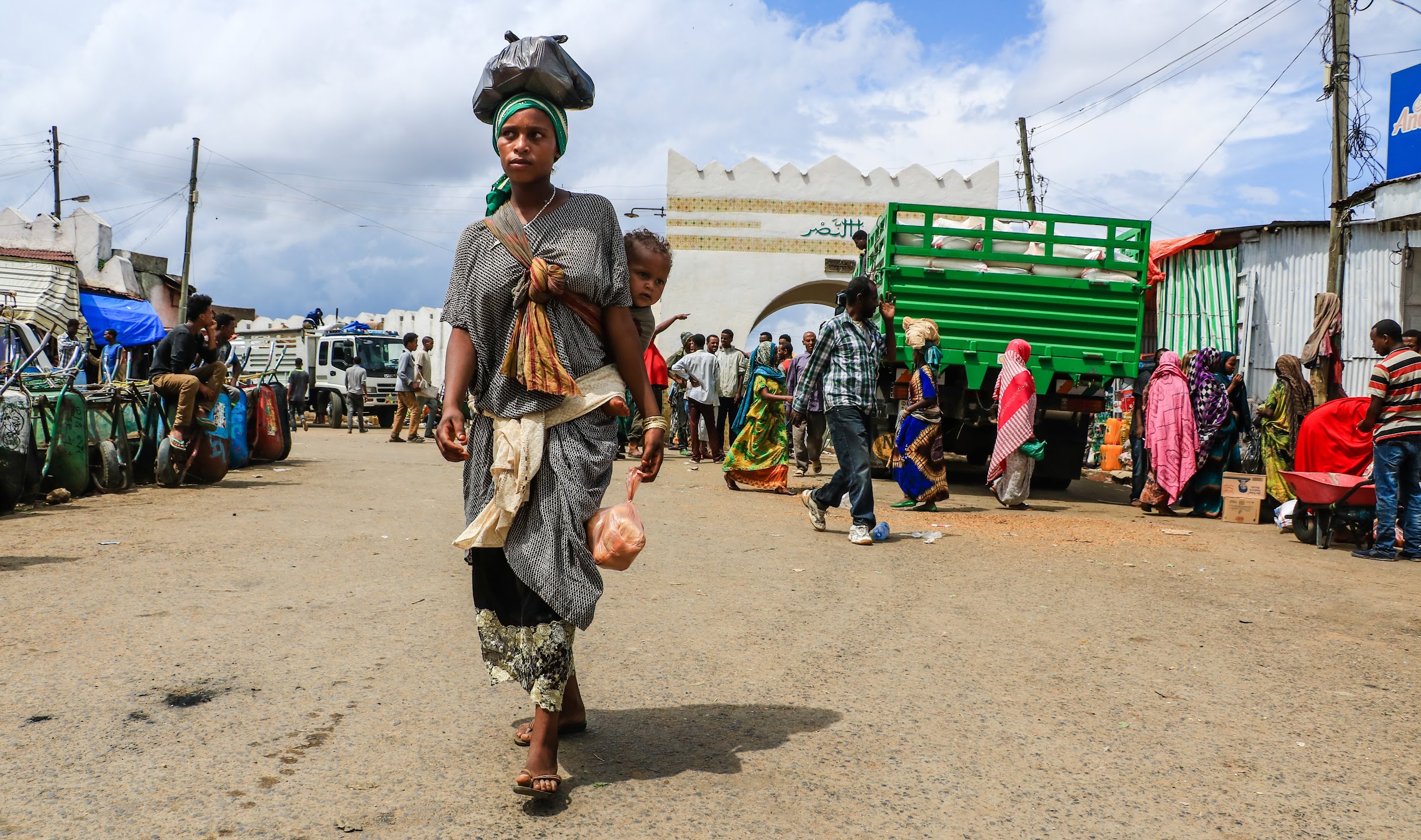 This practice of feeding the hyenas apparently started with a man named Dozo in the 1950’s and the now famous (thanks to BBC Planet Earth 2) Yusef Pepe is the fifth in line. It’s said that it leads back to an older ceremony called Ashura, which in turn dates back to a famine centuries ago where the locals would feed the hyenas to keep them from attacking livestock and villagers.

When we eventually left our guides house they drove us to a dark and empty car park. There was nothing; no man, no hyenas. We called him out on it after he tried to rip us off and we made our way to the real hyena man. We parked the van, headlights lighting up the scene in front of us. He was far outside the city gates, sat alone in the dark with a few hyenas laughing and fighting amongst themselves.

We got out for a closer look, then the show began. He started calling the hyenas to him and they ran from all around us, too many to count, surrounding him and his bag of raw meat. He fed them with a stick, either in his hand or his mouth. One by one we sat next to him while he teased the hyenas into jumping right above us, letting us feel their wiry fur, or just being knocked over by their strong, dense bodies. It was I N S A N E. I cuddled a freakin’ hyena on my birthday. 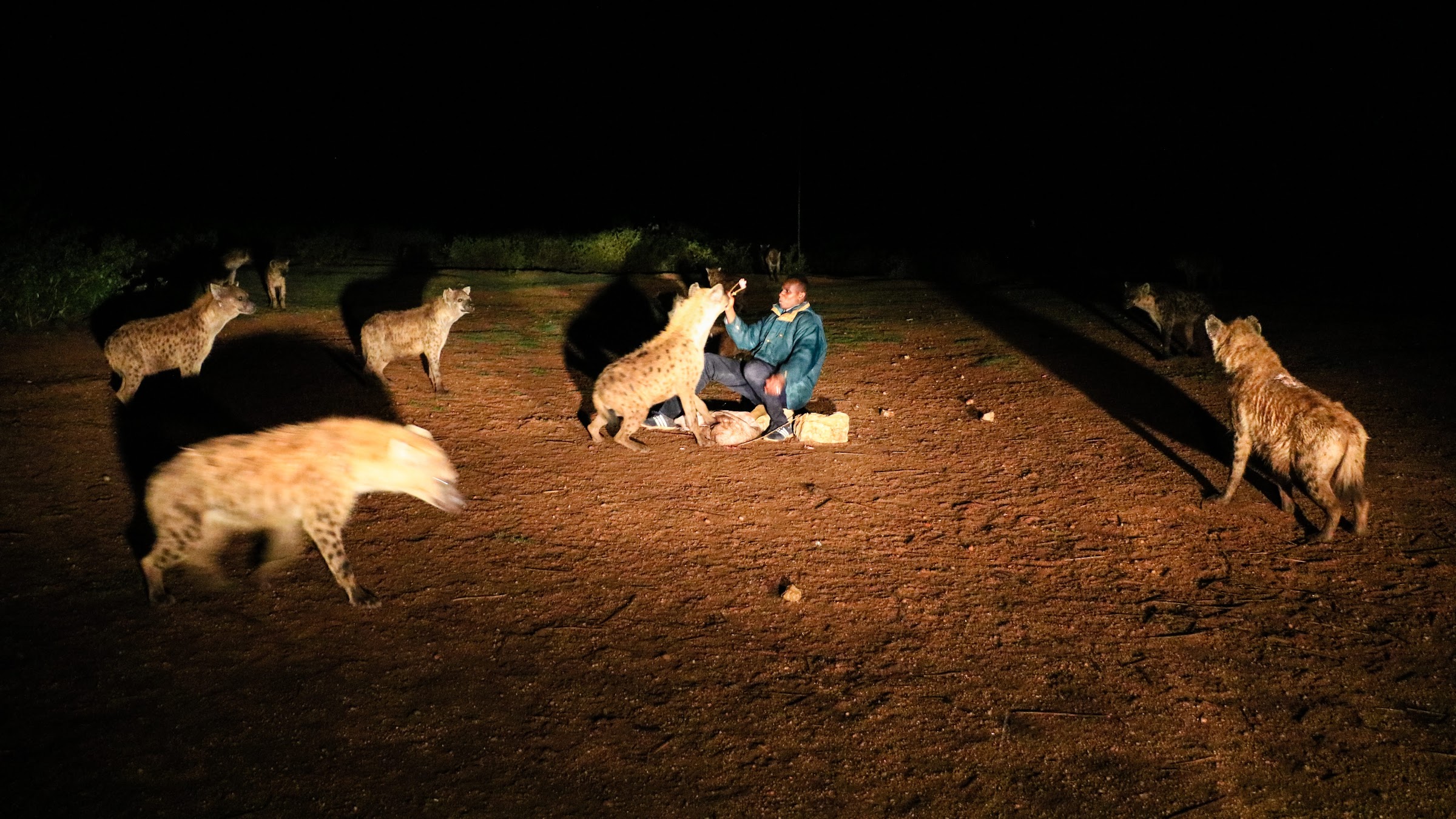 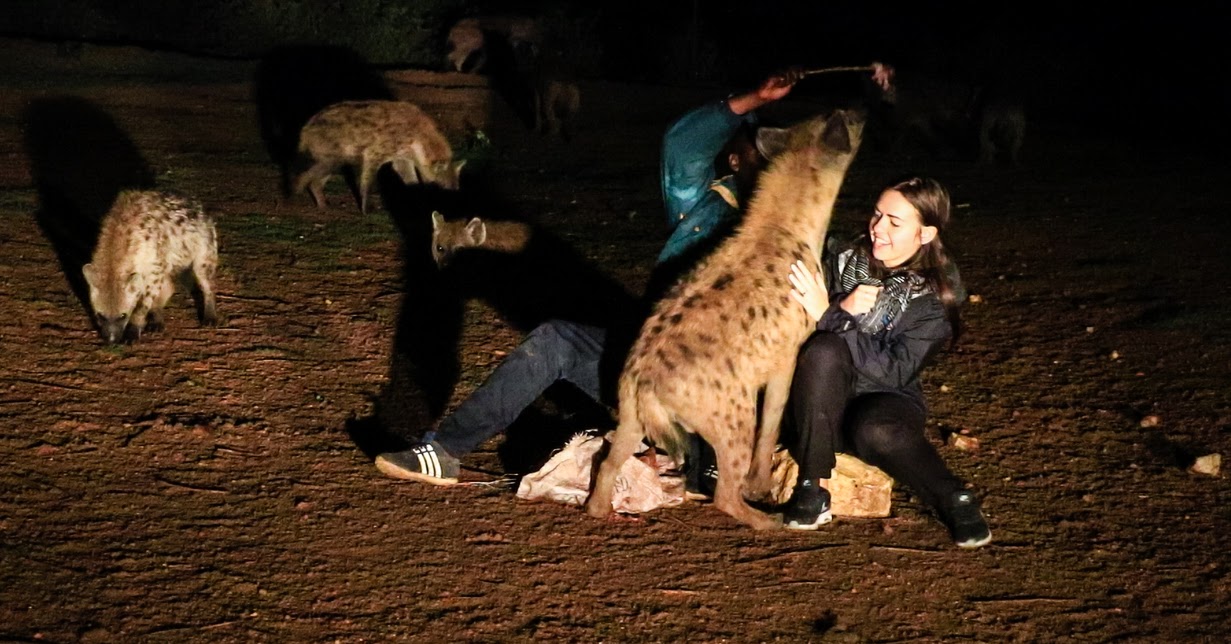 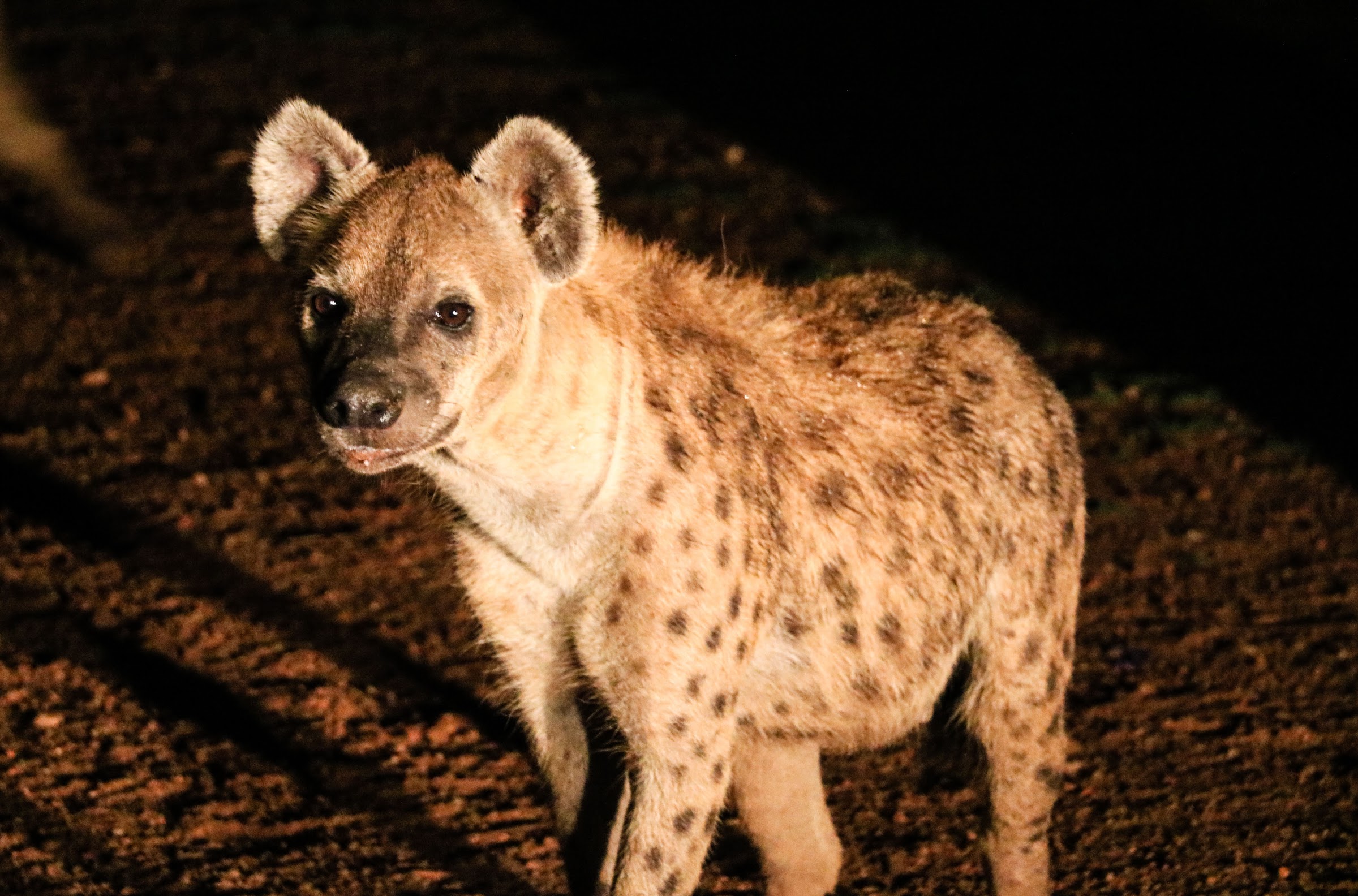 Our day ended with dinner and drinks at Fresh Touch Restaurant and an early night. The next morning started horribly, if you’ve ever heard the call to prayer then you know how loud that can be. Now imagine being literally surrounded by 99 mosques, the chanting mixed in with the sounds of dogs, roosters and humans waking up for the day. That is a morning in Harar. No sleep for you.

Half of our group went to explore the Stone Village but Dad and I stayed in Harar and attempted to navigate the winding streets without a guide. It was a success! It’s surprisingly easy to keep your bearing once you’ve already spent a day there, we recognised every landmark while discovering new and beautiful paths to take, followed by a never-ending chorus of “farango, farango!” which means ‘tourist’.

We regrouped in the afternoon, had a traditional Ethiopian meal of injera with shiro, missir, doro wat and a beyanatu fasting plate, before being driven back to the airport. We left much earlier than our flight demanded with a promise of a quick tour around Dire Dawa, but we were unceremoniously dumped at the airport and left to sit in the park outside instead. Our guide was friendly enough but he definitely tried to rip us of a couple of times which sucks when it already costs so much. 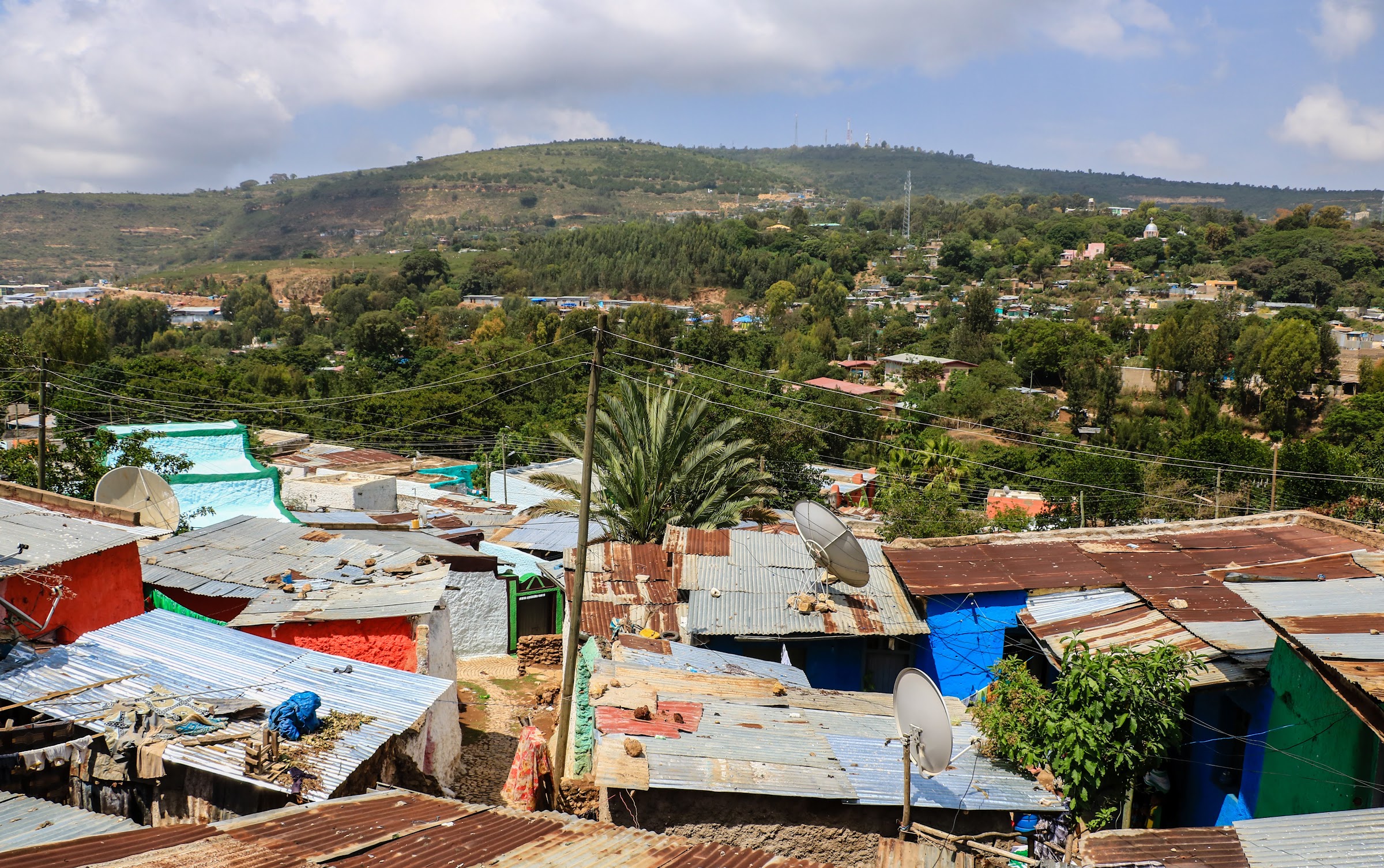 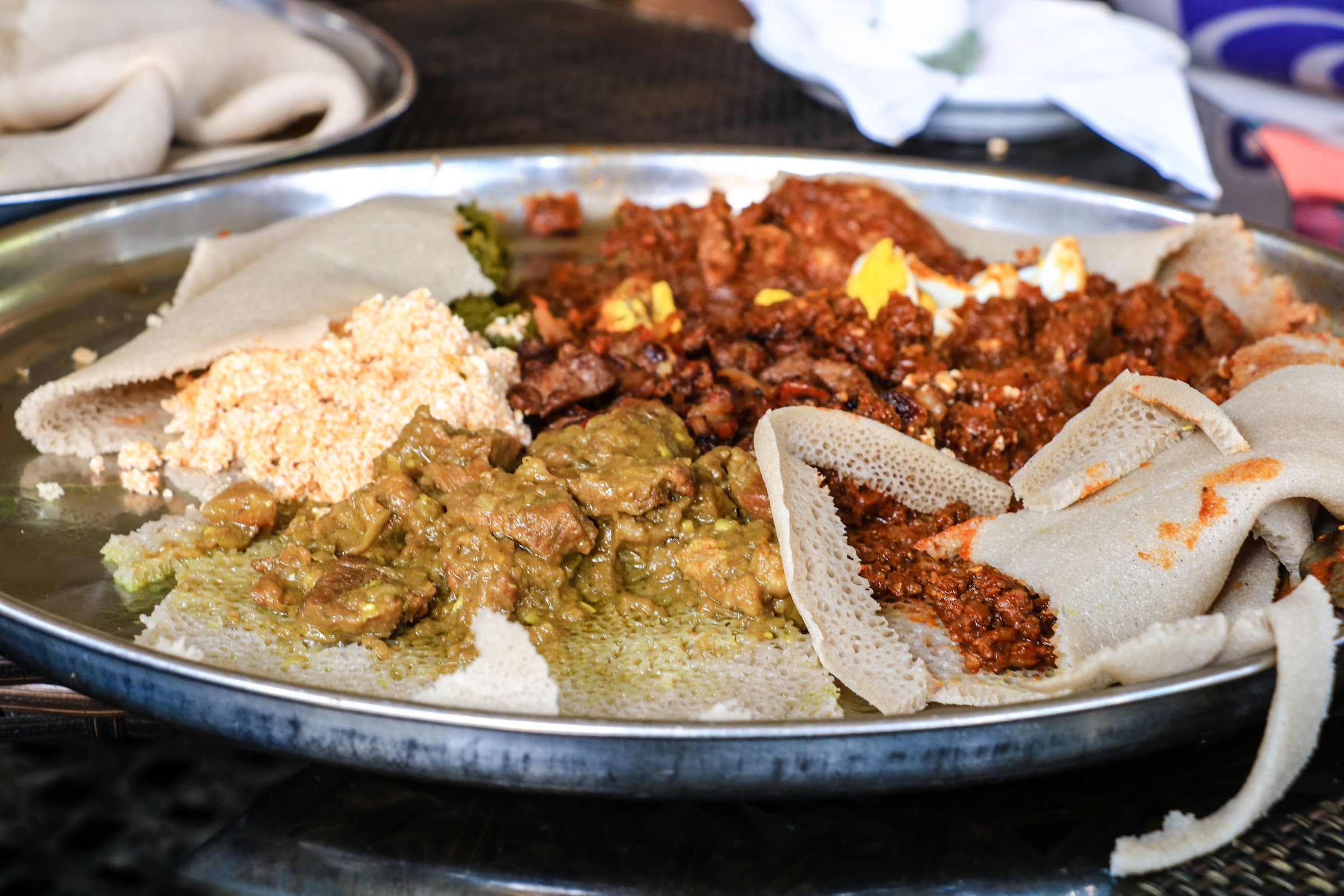 Overall it was a fantastic weekend full of history and culture. This beautiful old town is definitely worth a visit, whether you pre-book a tour in Addis or just turn up at Dire Dawa and wing it. And what a unique birthday! Thanks, Dad.