“No, not a chance, you’re insane!” I hear you say? Then maybe you should read this and rethink your answer because a) bungy jumps are cool, not dangerous and b) this is the world’s highest commercial bridge bungee jump at 216 metres (709 ft), which pretty badass!

After having just completed the 5 day Otter Trail hike and crossing the Bloukran’s river where it joins the sea I was about ready to give my body a rest, by throwing it off a bridge 216m above that very same river. We spent a relaxing night in a luxurious beach-front cabin in the Tsitsikamma National Park, drinking wine and psyching ourselves up for the next morning. 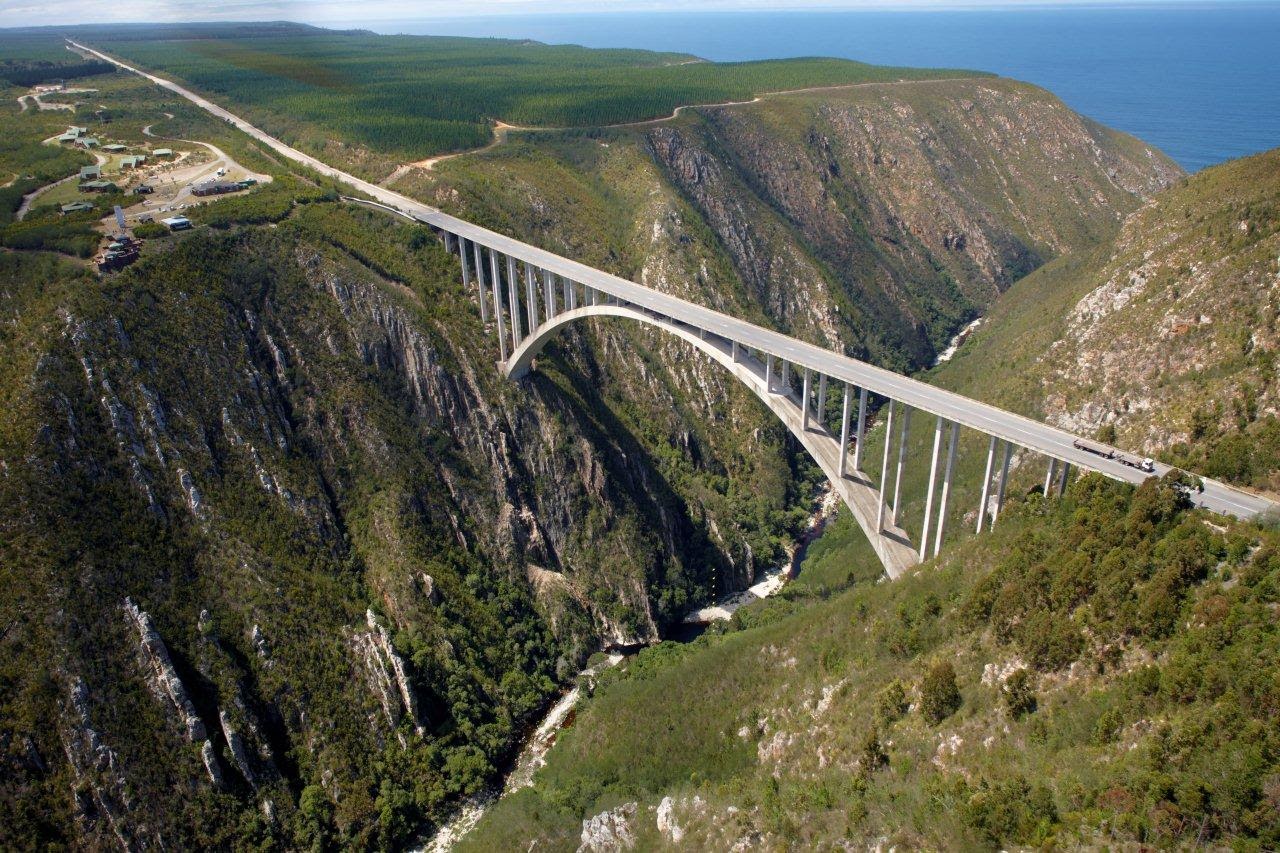 We arrived at Face Adrenaline just after 10am and met the smiley girls at the booking desk who had us sign our lives away before assigning a jump number, weighing us and writing the information on our hands for everyone to see. We made our way over to the harnessing deck, climbed into a super flattering safety harness and were told to wait until 11am.

The waiting is always the worst part…

Waiting and watching others plummet (almost) to their deaths while envisioning your own fall. Soon enough the group that preceded us had arrived back and it was our turn. Eight brave souls, gathered together to face their fears and get that intense adrenaline rush that you can only get with a bungy jump. 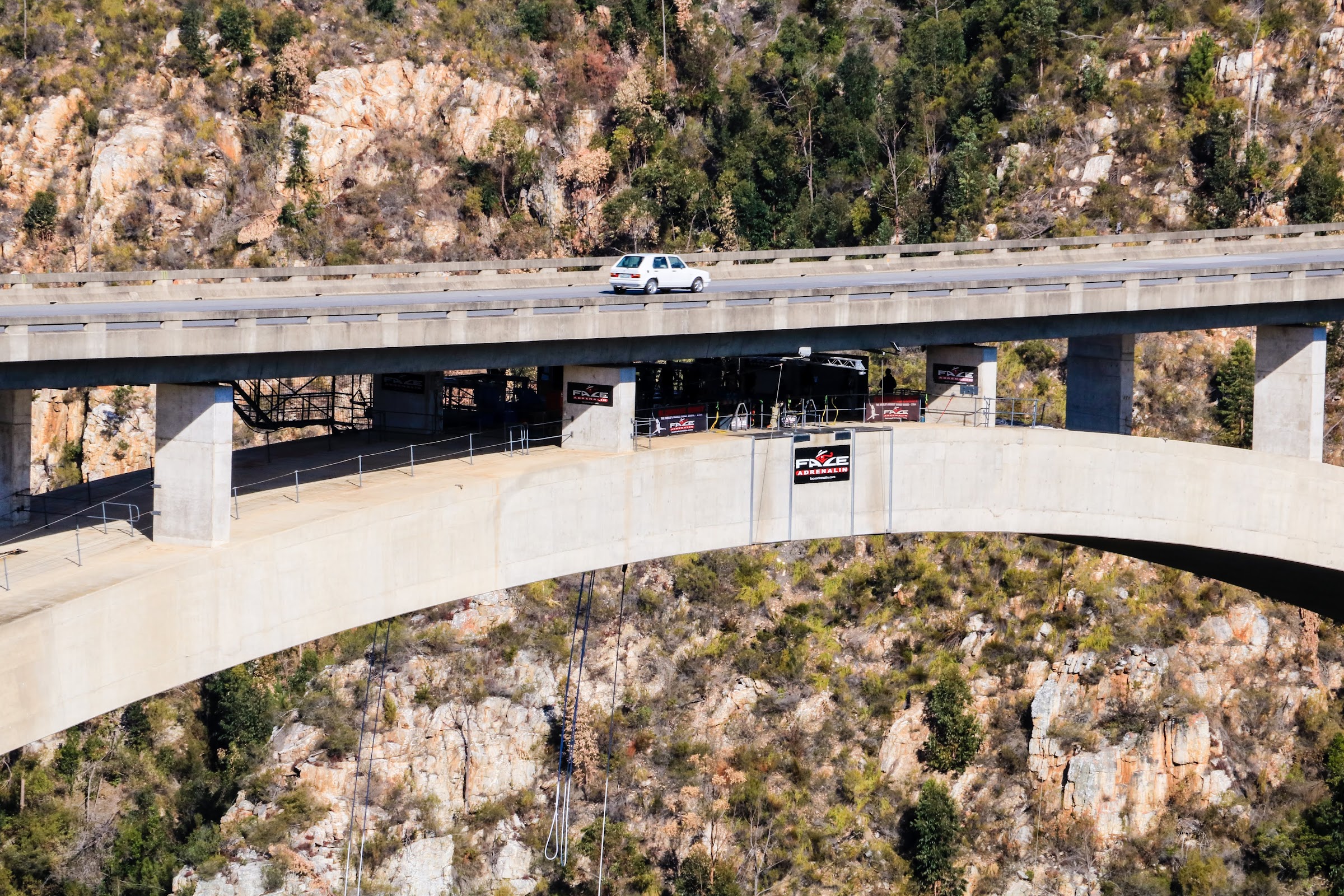 We were led to the underside of the bridge and the walk across the was a challenge in itself. It reminded me of the scene in Jurassic Park in the pterodactyl biome… you know the one? But with fewer dinosaurs, which didn’t make it less scary. It’s not surprising that a few people will back out at this stage, but our small group persevered.

The jump sight is a pretty sick place to hang out, even if you’re not jumping. You can pay R150 ($10) just to walk out and laugh at your friends, or enjoy the view. There’s music playing and the whole crew is all smiles, asking you a million questions to help take your mind off the task ahead. They gave us a quick safety speech and chose their jumpers two at a time. 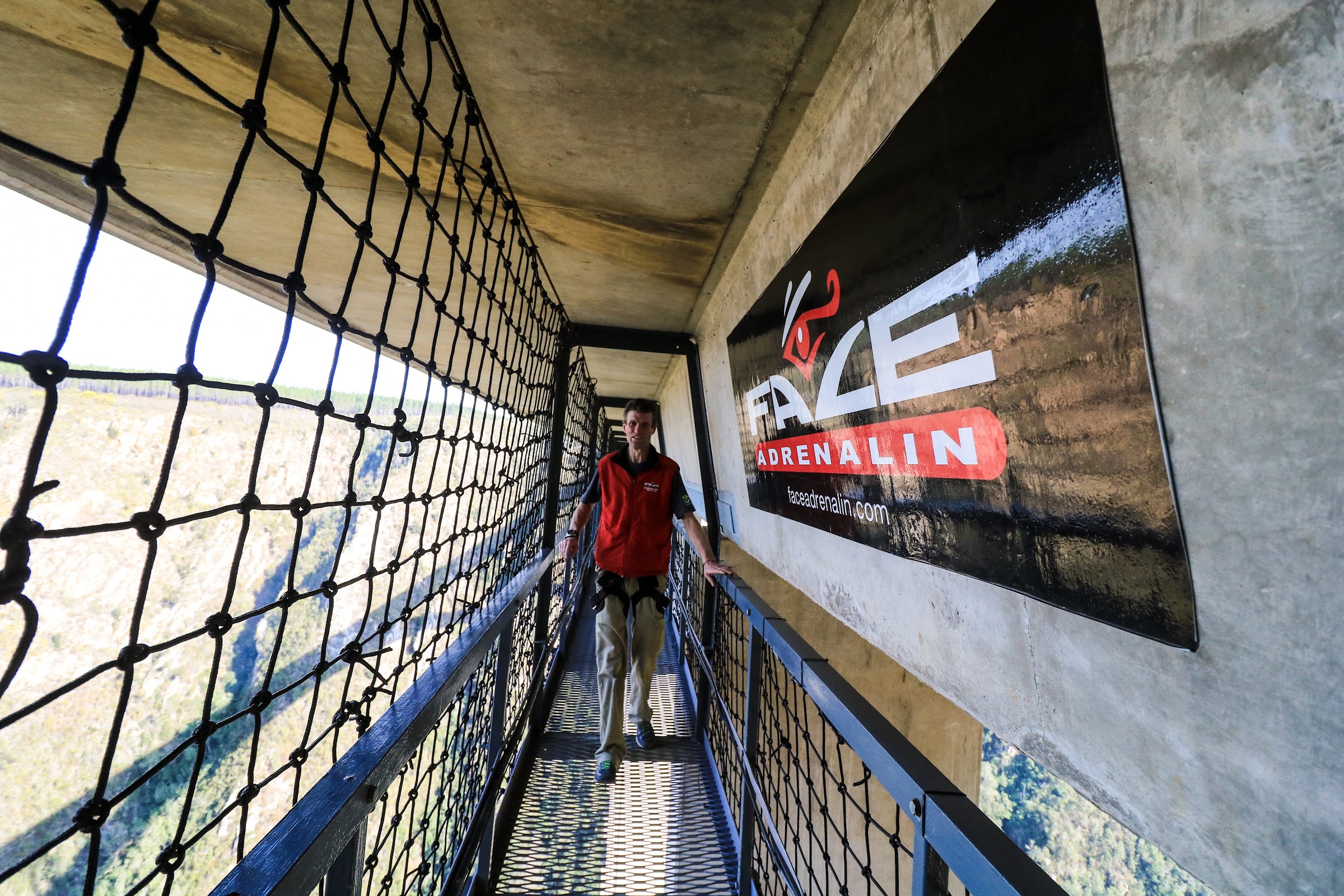 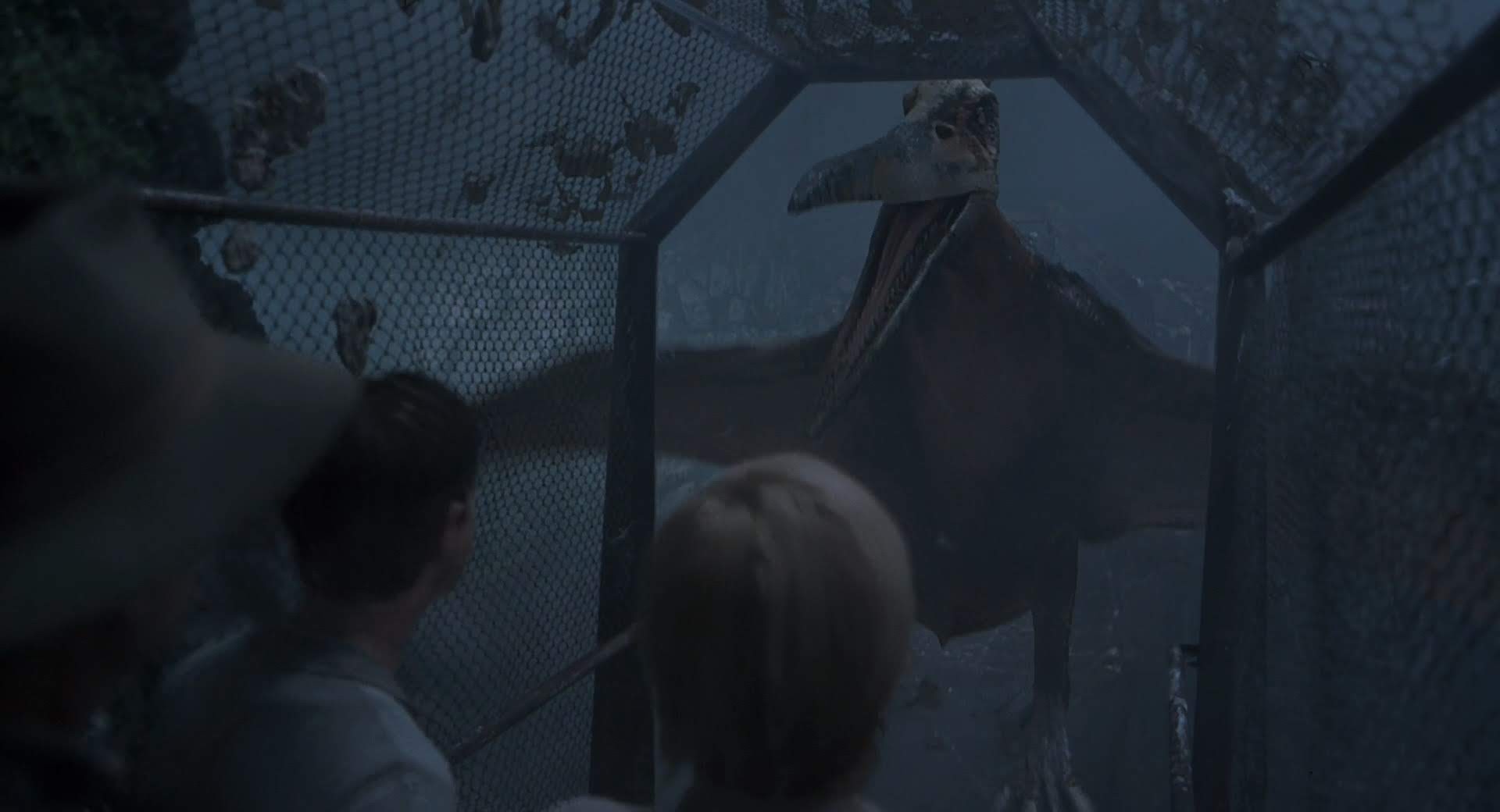 I watched a few of the others jump and suddenly it was my turn. I had my feet strapped together and was carried by two lovely gentlemen like a Broadway star to the very edge, toes over the side and there’s no time to even look down, straight away I heard the shout… “Three… Two… One… Bungy!” and I threw myself off a perfectly good bridge, 216m above the ground.

I didn’t even realise I had my eyes closed at first, but I opened them as the ground was rushing towards me, my stomach in my mouth and my screams left far behind (the 160m free-fall lasts for a surprisingly long time).  People always assume a bungy jump is going to be rough but it’s so gentle you don’t even notice the bounce. Soon enough you’re just chilling upside down, wondering if the straps around your feet are really tight enough… 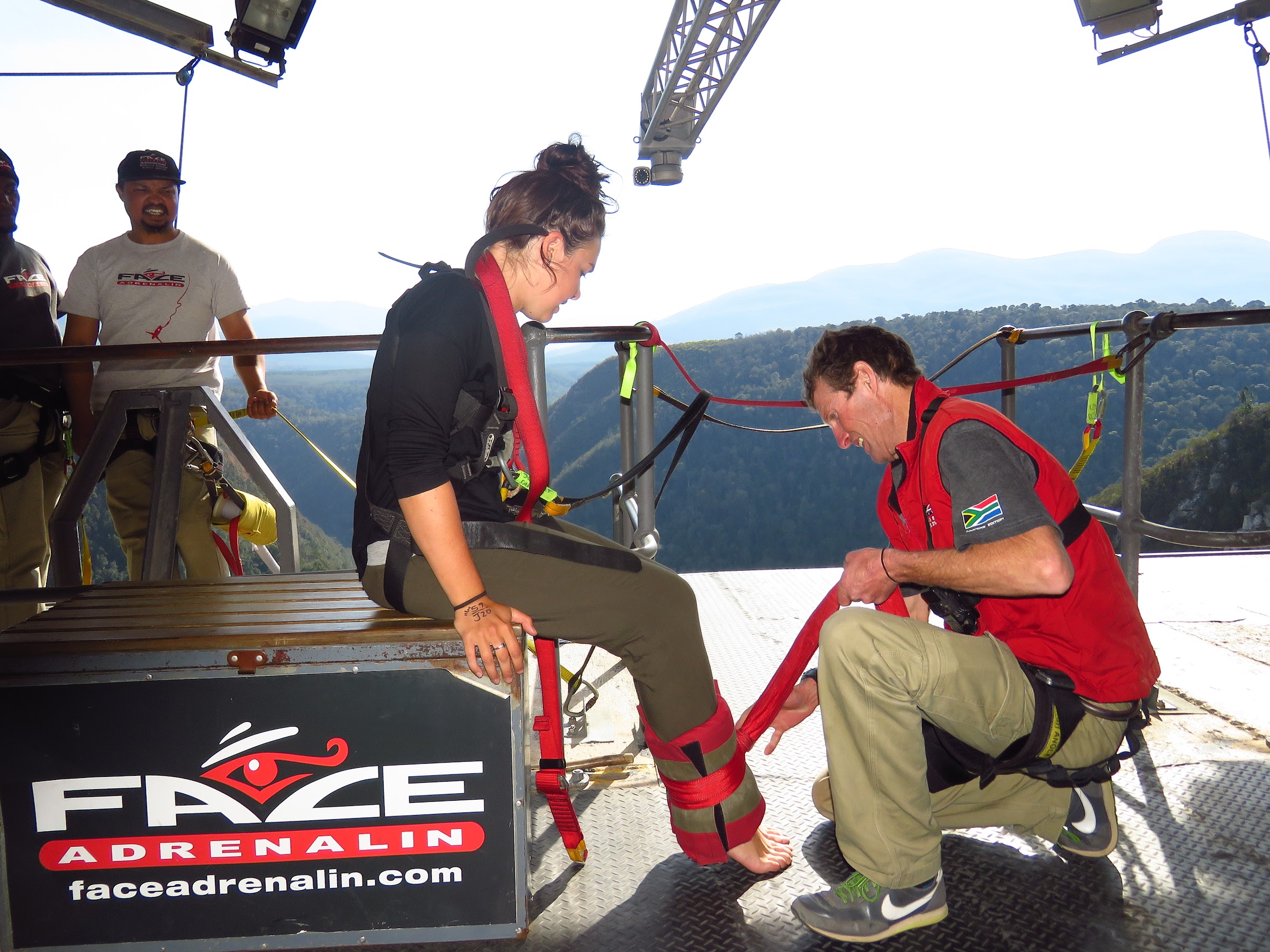 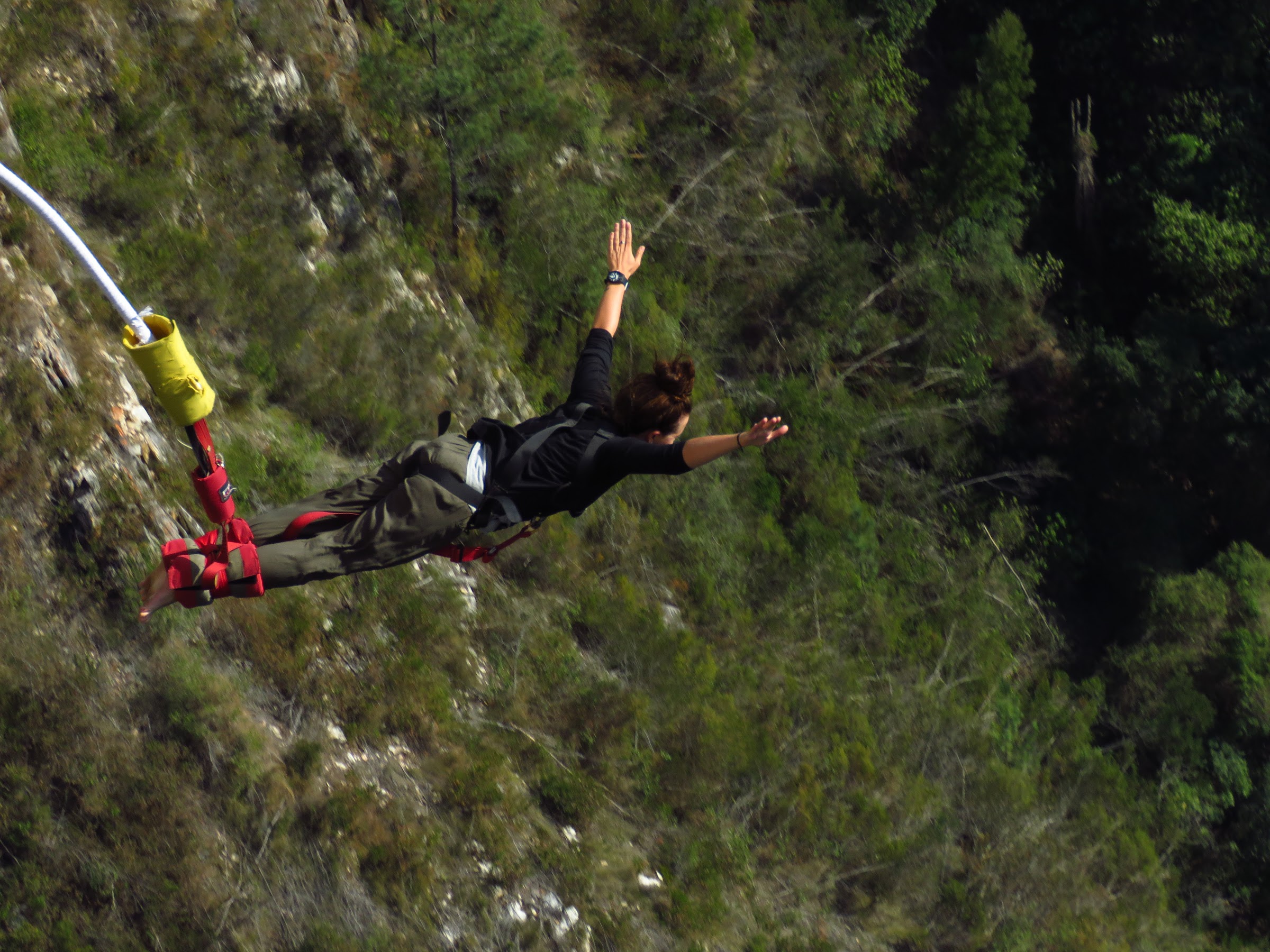 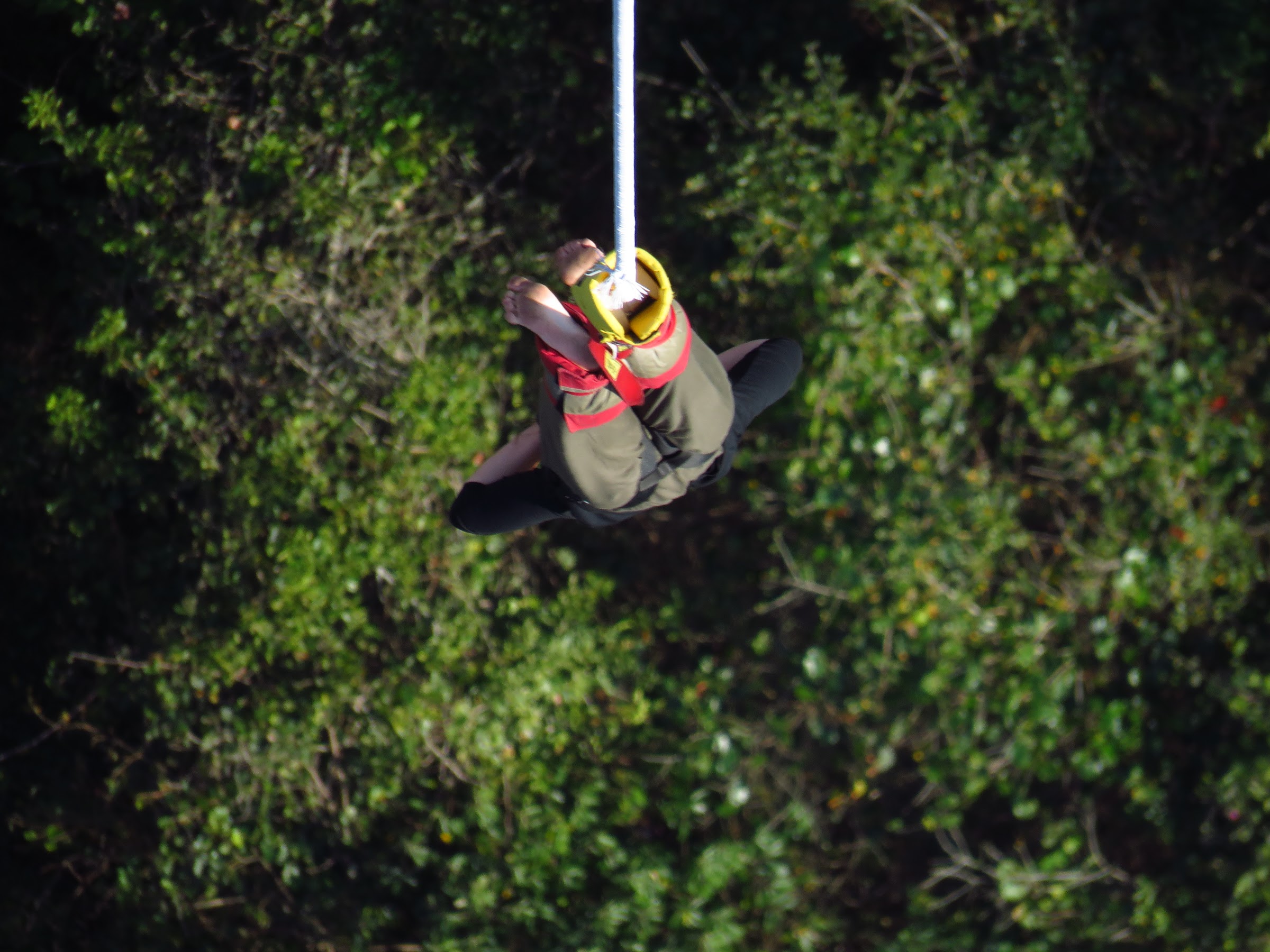 The neat thing about this bungy is having someone lowered down to you to clip you upright and winch you back up while asking about your life story, a brilliant distraction from the fact your dangling 200m above the ground. Being tied up is awkward and being dumped back on the bridge was a relief, but it was smiles all round at making it back alive!

The whole experience is over so quickly, you don’t even know how to feel. People ask “How was it!?” and you kind of just stand there wondering what the fuss was all about, while your body is trying to get over the fact that it tried to commit suicide and your brain comes to terms with the fact that you didn’t die.

It was my ninth bungy and it was without a doubt the best I’ve ever done. From the height and the view to the awesome crew who made us feel completely safe in their very capable hands. If you only do one bungy in your life, make it this one. If you’re looking for that ultimate adrenaline rush then what better way to get it that the world’s highest bridge bungy? 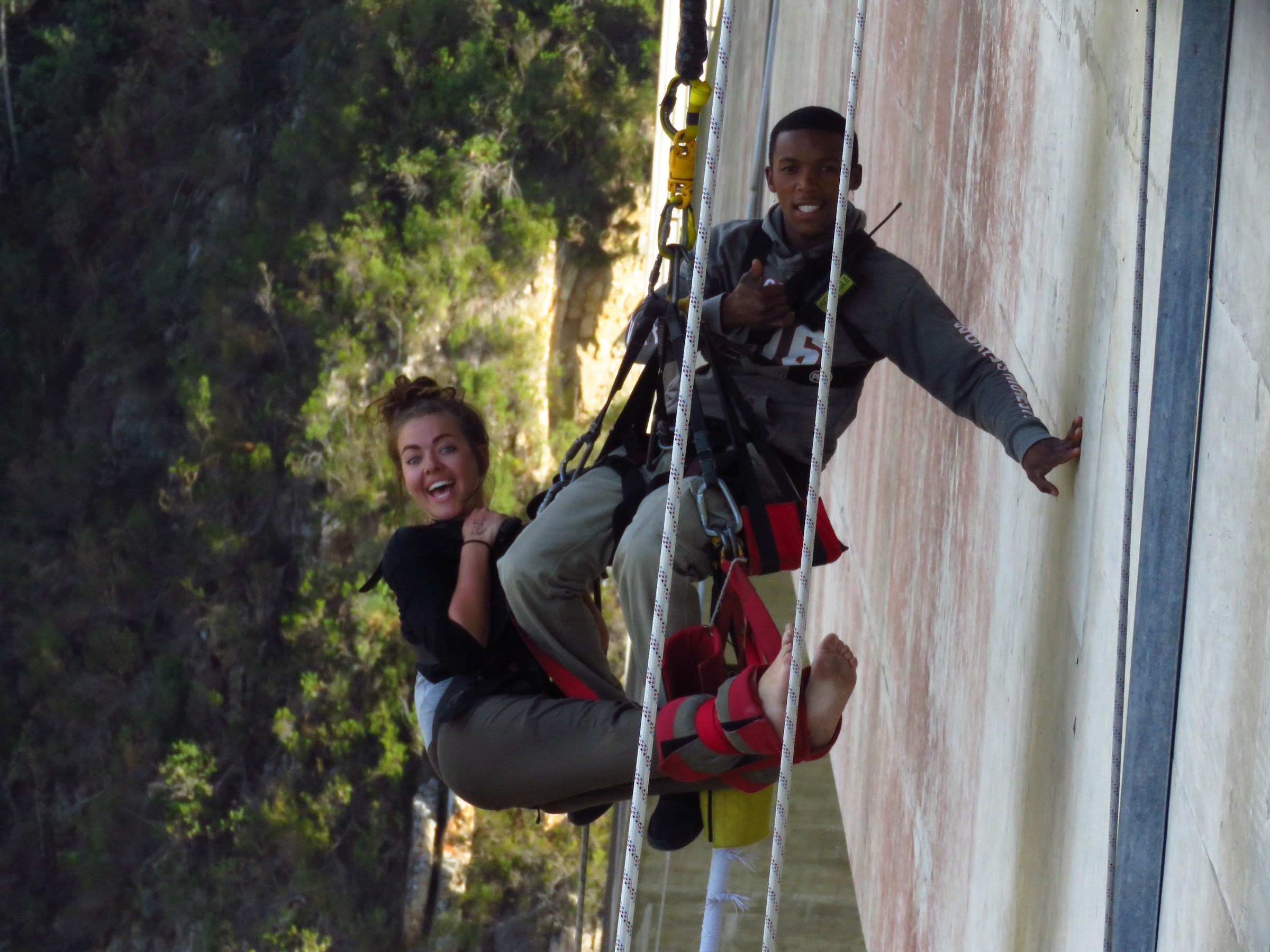 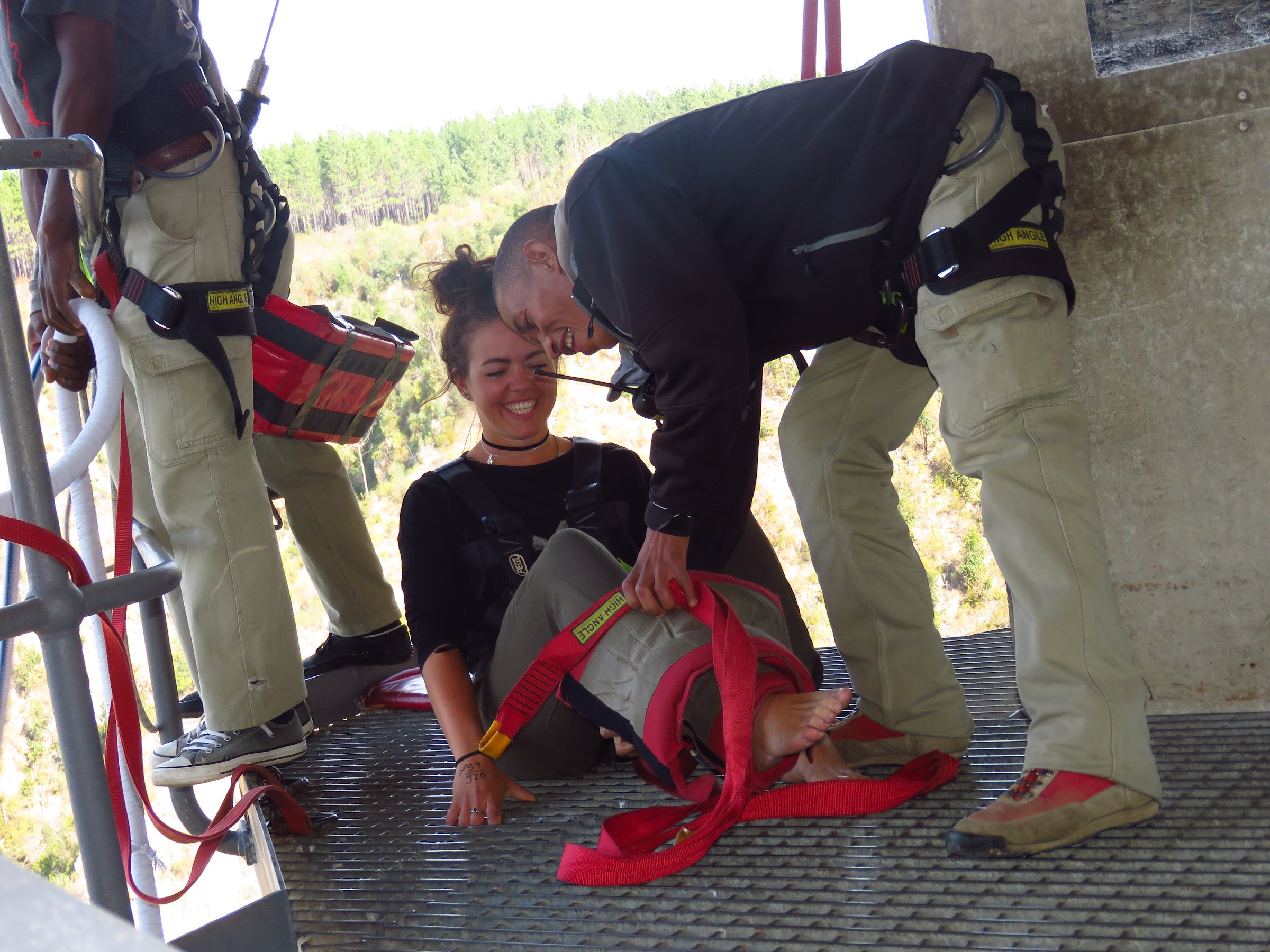 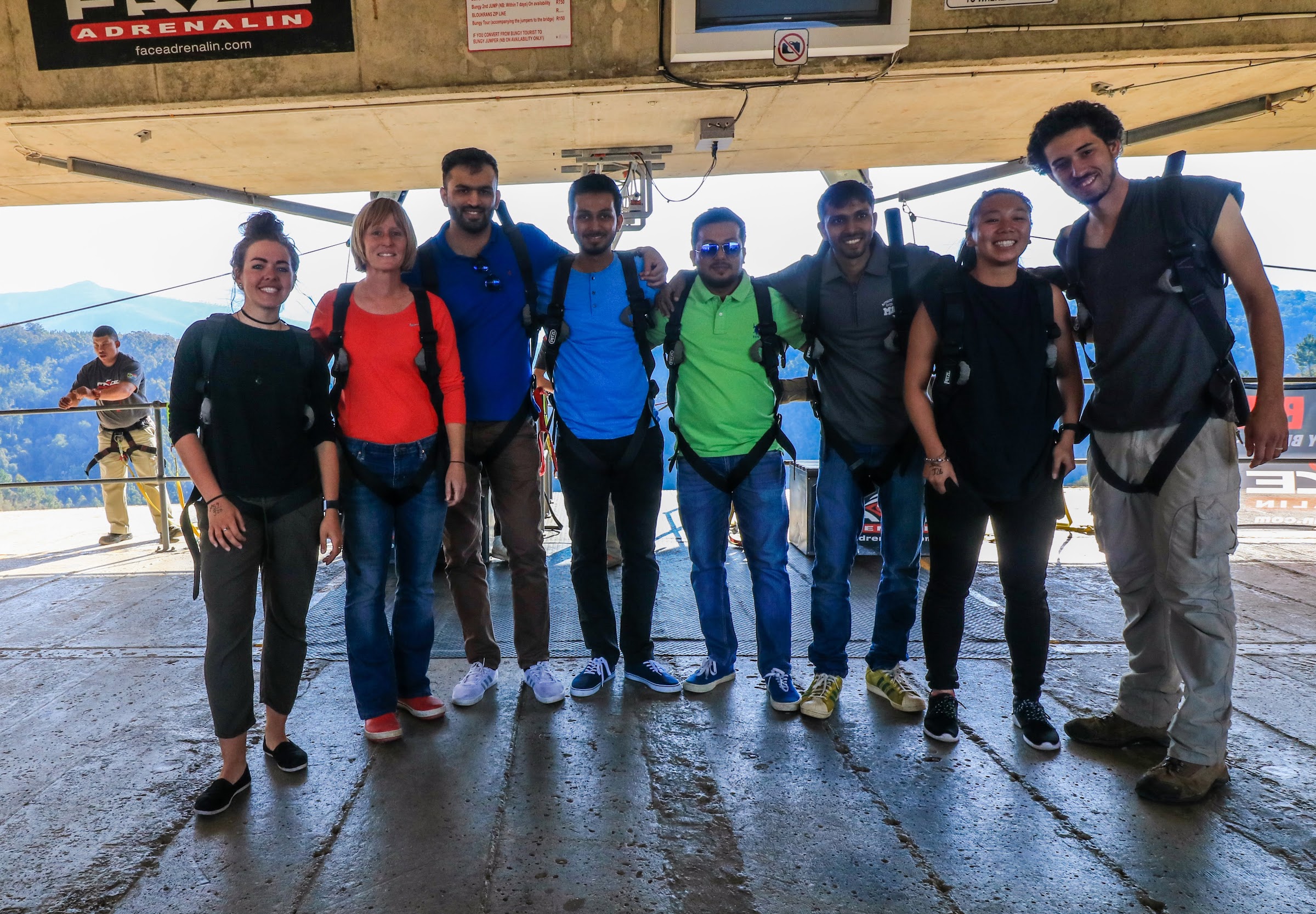 The jump costs R950 ($70, which is $130 cheaper than the Nevis in NZ). You’ll pay only R200 ($15, if you book online before 30th Sep they’re free!) for the professional photos and R300 ($20) for the video, filmed from different angles that capture the entire experience, delivered to you on a USB memory stick and lanyard.

You can purchase a range of clothing in the well-stocked gift shop and you should absolutely buy a slice of bungy cord for R50 ($4) as a souvenir and a tip for the bridge crew. Your jump certificate is free, as is the unbeatable sense of accomplishment.

Grab yourself an after-bungy beer and a bacon, blue cheese and avo burger from the Cliff Hanger Pub, followed by an ice cream because you’ll probably need the sugar, while you watch others conquer their fears! And that big, goofy smile on your face will be there for a while because you’re amazing and alive and ready to take on the world. 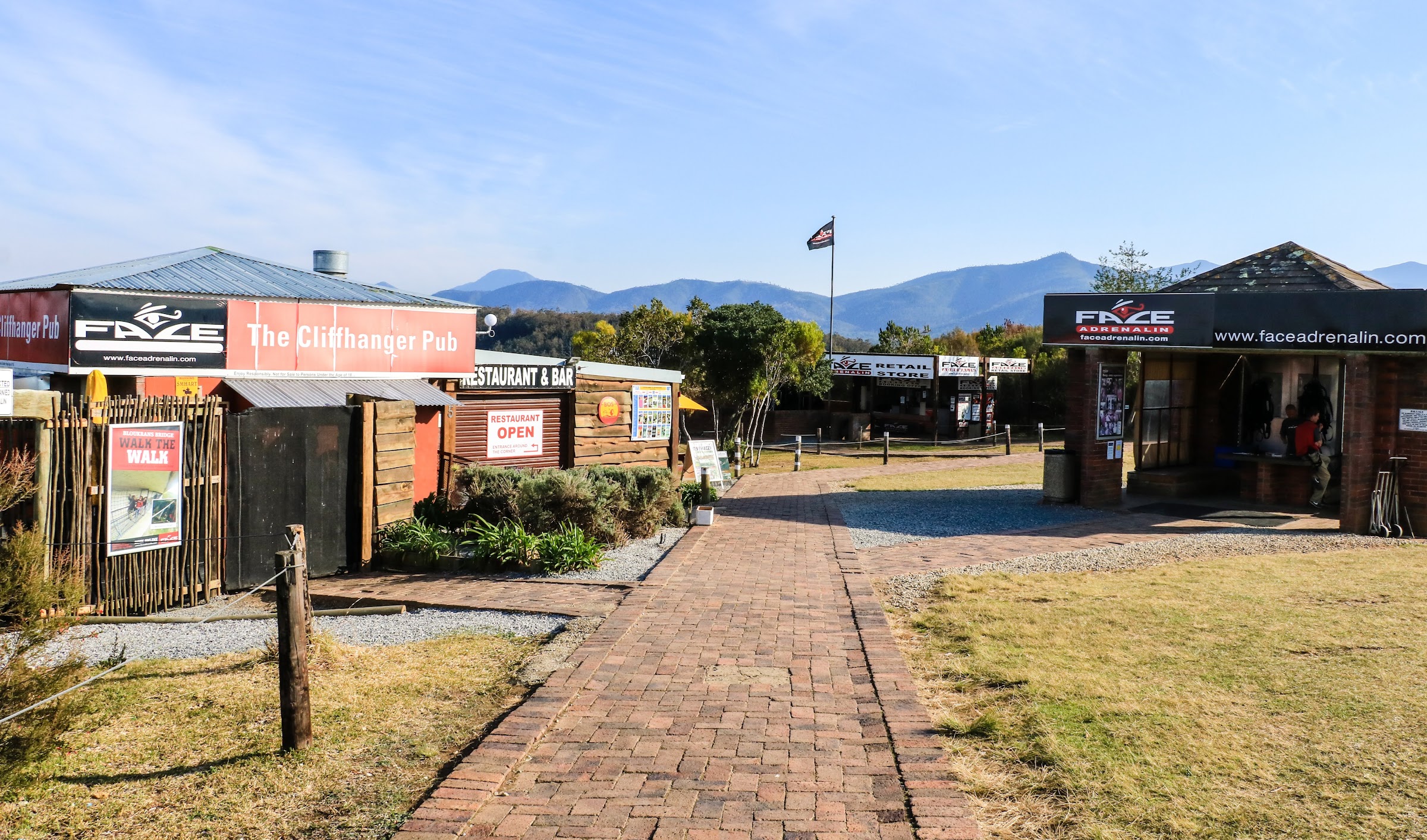 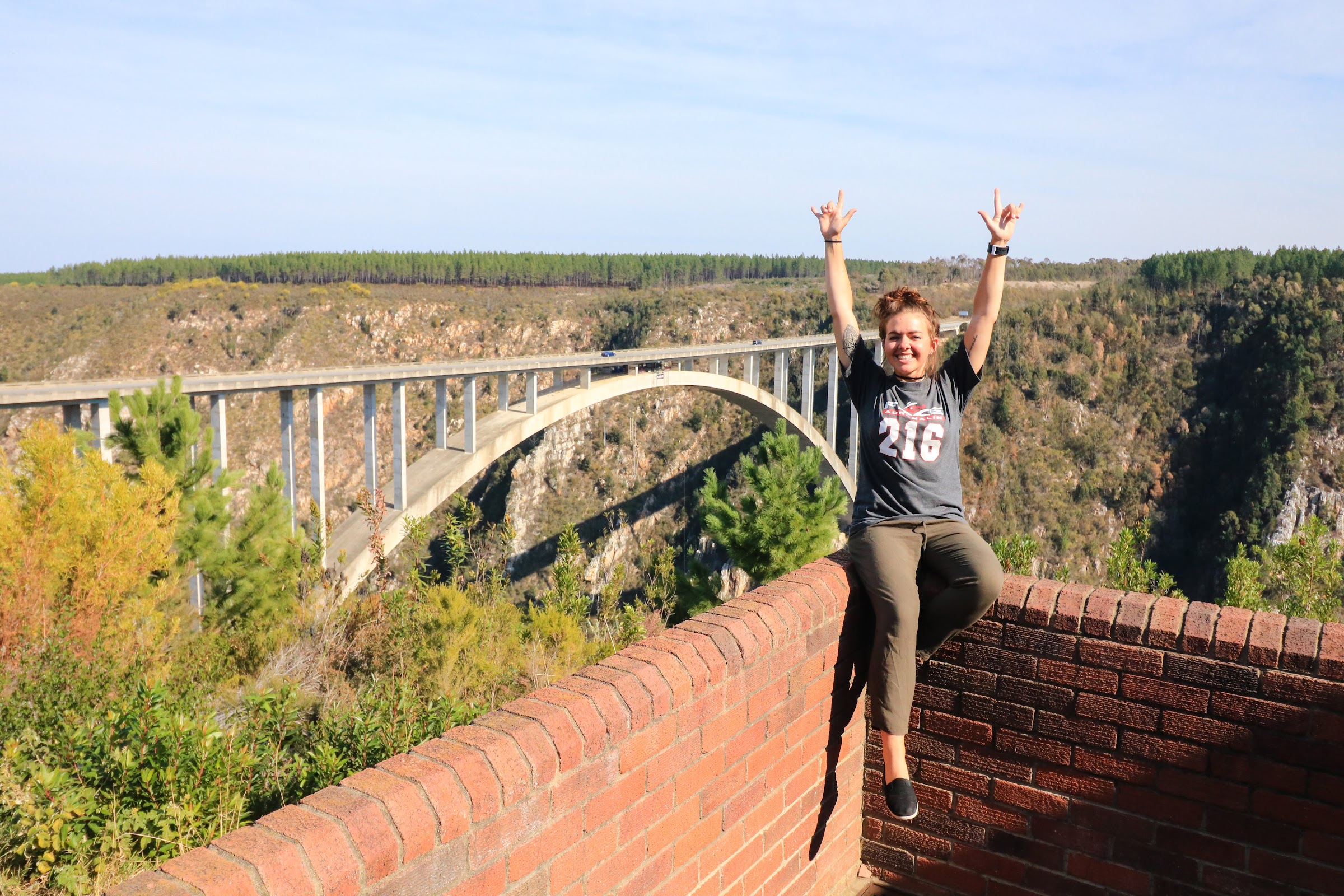 Highlights of the day:

A huge thanks to Braden and the totally awesome crew at Face Adrenaline from this very happy adrenaline junkie for such an amazing experience!

3 thoughts on “Are you brave enough for the world’s highest bridge bungy?”