The Danakil Depression is probably one of the coolest places I’ve ever been. It’s an otherworldly landscape where you can find endless salt flats, towering salt mountains, impossibly colourful sulphur pools, and the worlds only permanent lava lake that, turns out, wasn’t so permanent because it erupted three months before I got to see it. This place is W I L D and it needs to be on your bucket list.

The Danakil Depression can only be explored with a tour so your best bet is to make your way, via bus or plane, to the city of Mekele. Here you’ll find a good range of accommodation starting at $8 for the basic Eden Pension, to $80 for the luxurious Axum Hotel. There are also plenty of restaurants, bars and pool halls to keep you fed, watered and entertained.

You can choose a three or four-day tour, apparently, you see the same things but just on a different time scale. I did a three day, two-night tour and paid around $350 (I’m sure you can find cheaper if you shop around). That is a lot of money for just three days, it includes all transport, food and accommodation (which isn’t saying much as you’ll either be sleeping in someone’s living room, in a dusty hut at a camp or at the top of a volcano), and it’s worth every cent.

Day one started early, getting picked up at 5:30 am in a white truck with three other people and our crazy driver Solomon. It was a long drive into the mountains where we eventually connected with another car with four more people and stopped for a breakfast of veggie burgers and biscuits with plenty of tea and coffee.

Our first stop of the day was the salt flats. This land was once fully submerged in water, and thanks to the same rifting process that formed the Red Sea is now a 2km thick layer of salt surrounding Lake Asale. The salt mining industry is huge here, and if you’re lucky (we weren’t) you’ll be able to watch the Afar people cutting huge blocks and loading them onto camel trains. 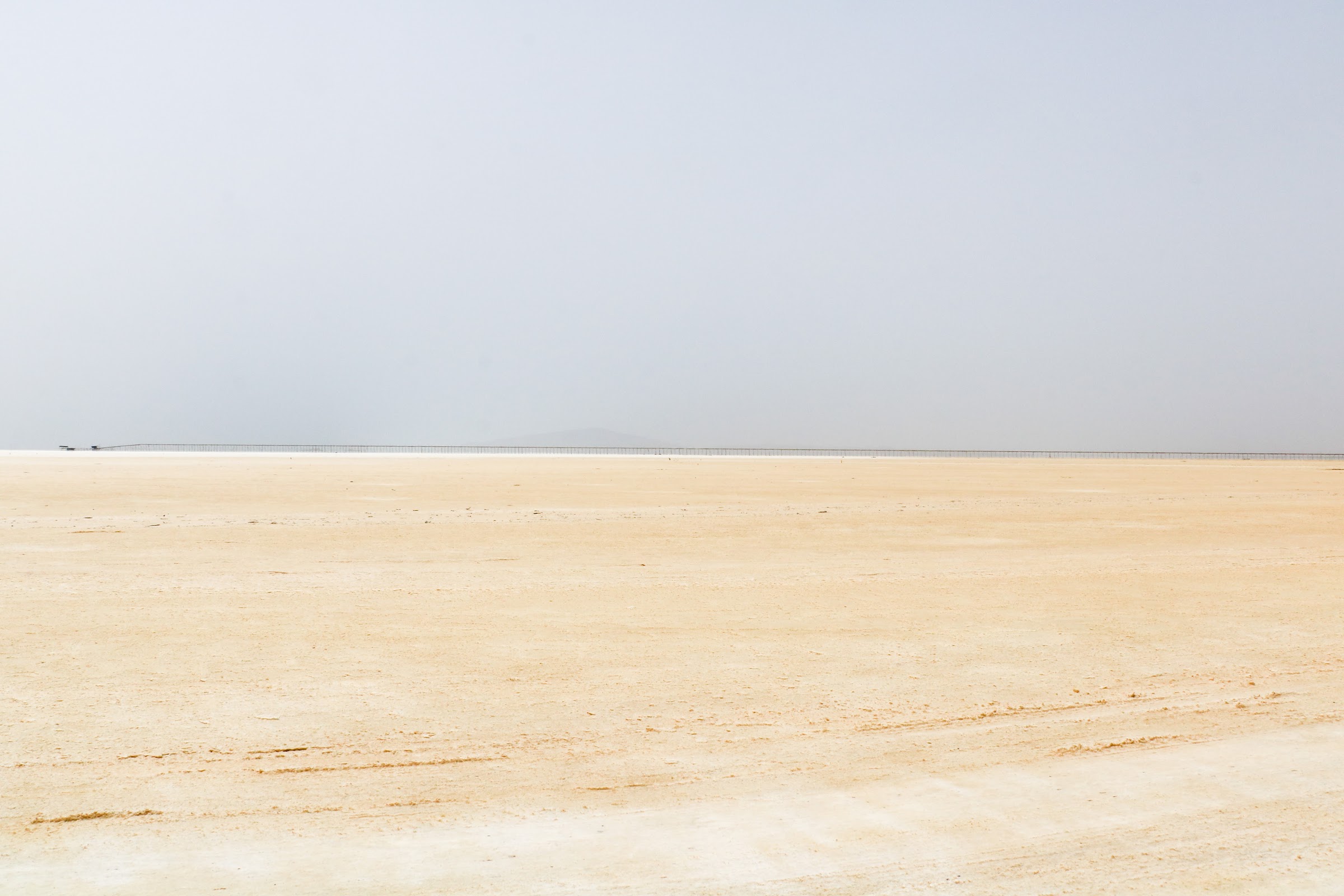 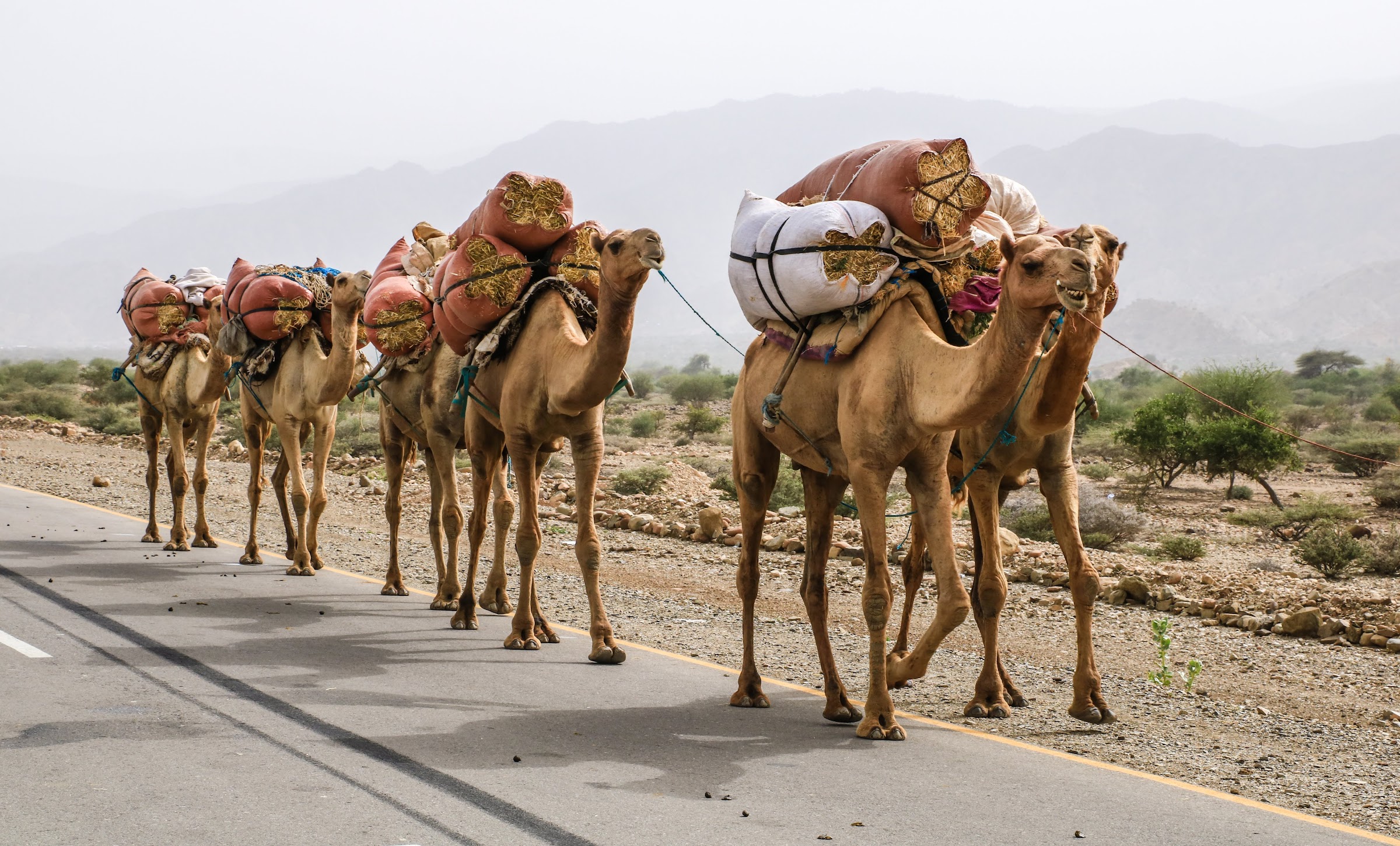 Our second stop was by far one of the most mysterious and surreal places I’ve ever visited. Dallol, 20km north of a town called Hamed Ela, is the lowest point of the Danakil, and as the iron seeps into the ground it turns the salt flats a startling shade of blood red, but that wasn’t the best part.

We climbed a small hill and came face to face with a multicoloured field of smoking, bubbling sulphur pools. Words cannot describe the feeling of walking through such a landscape, and you would never be allowed to do this in a developed country, safety first and all that. It was like being in another world, beautiful and awe-inspiring. 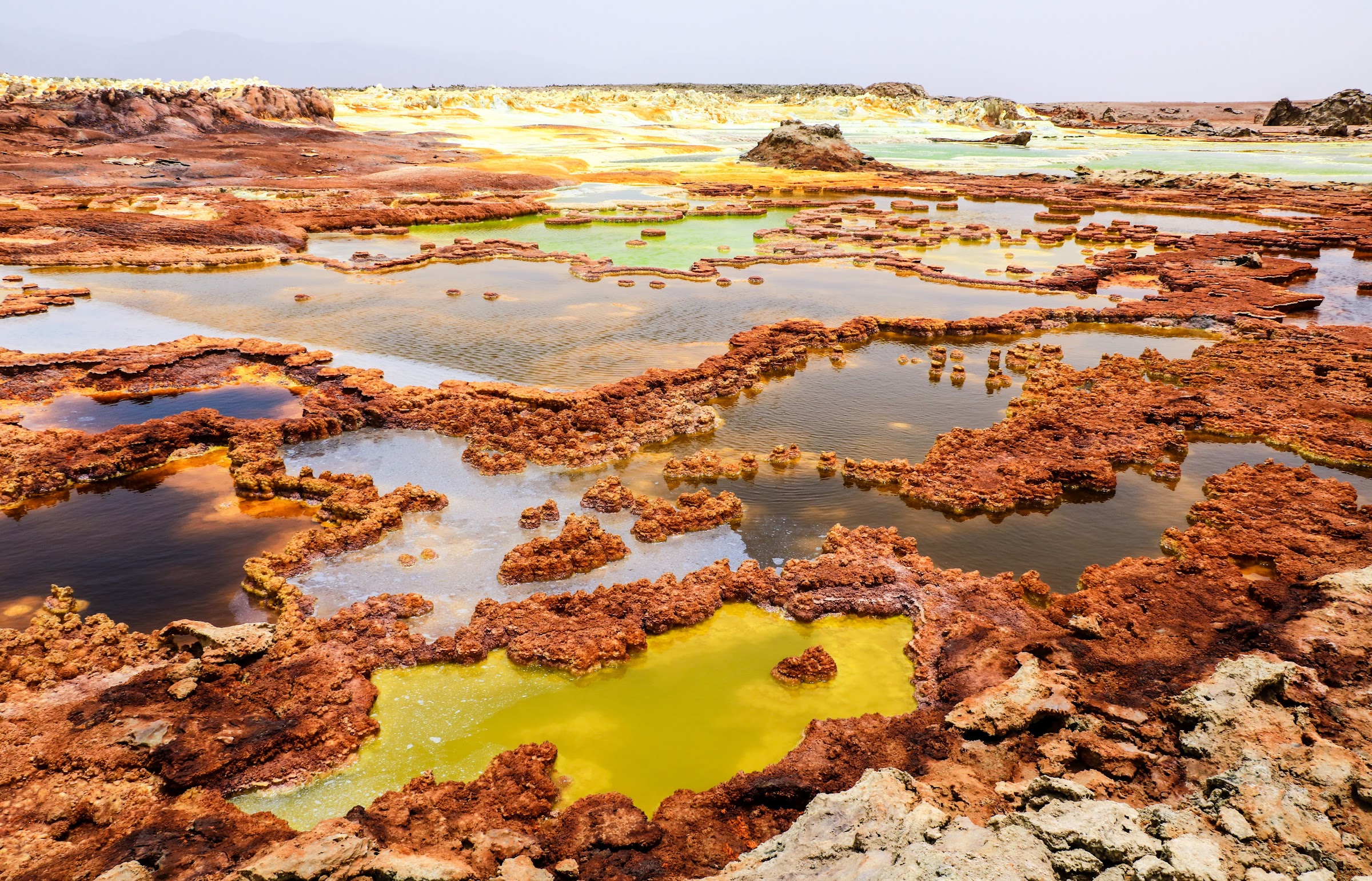 We had a quick visit to the nearby salt mountains, escorted by armed soldiers thanks to the old threat of murder and kidnapping. This place is pretty impressive as well when you realise that the towers surrounding you are made entirely of salt. We also stopped by a bubbling yellow lake, the oily water of which was quickly bottled up and taken as souvenirs for it’s healing properties.

We had a little surprise for lunch when we stopped on the side of the road, followed our guide into a dusty valley and found a waterfall with a small pool at its base, big enough for about 6 of us to sit in while they brought us lunch, with a nearby overhang providing shade for the rest. The afternoon was spent driving south to a town called Abela, 40km east of Mekele, where we spent the night drinking honey wine and playing Ring of Fire. 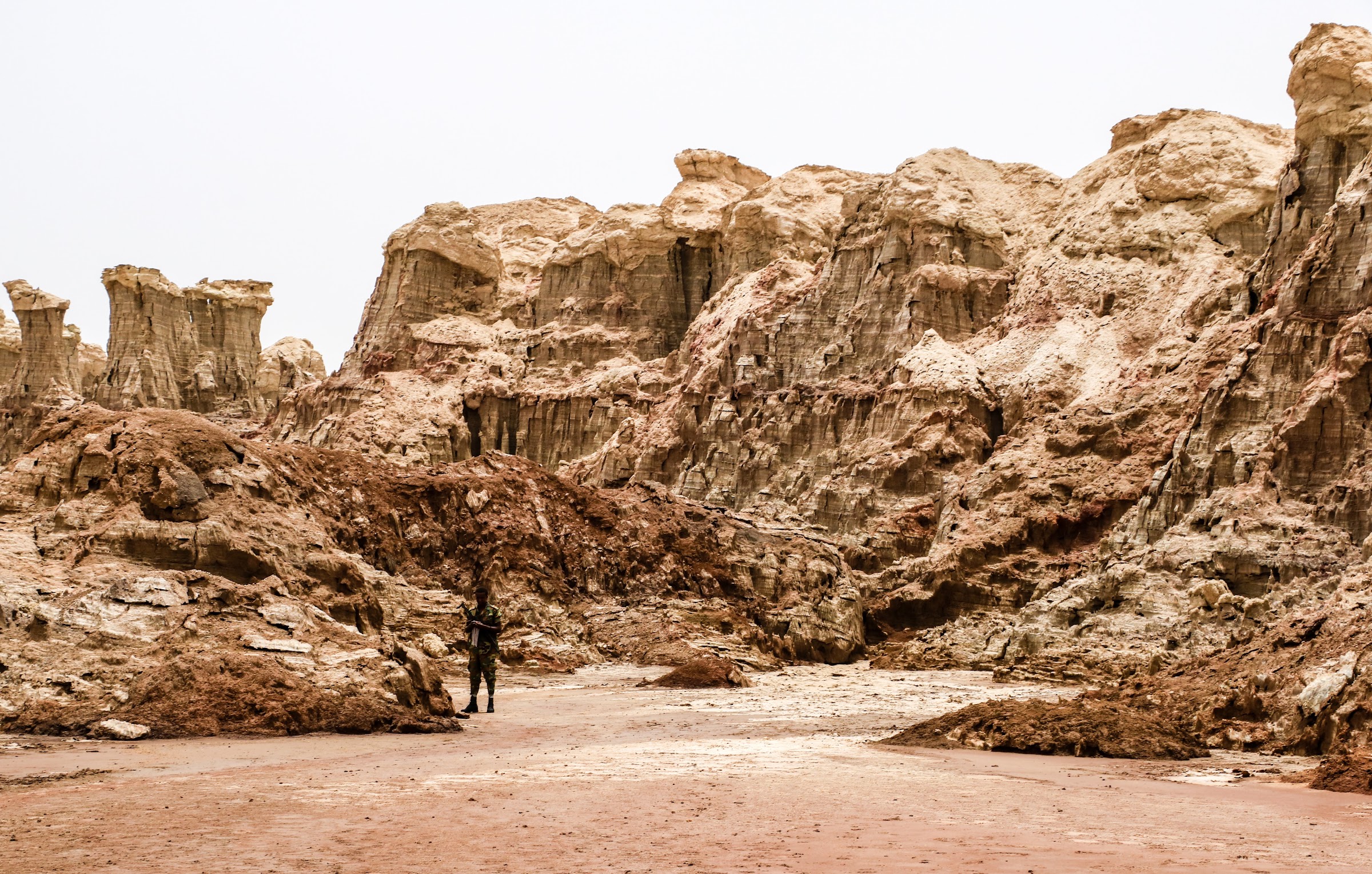 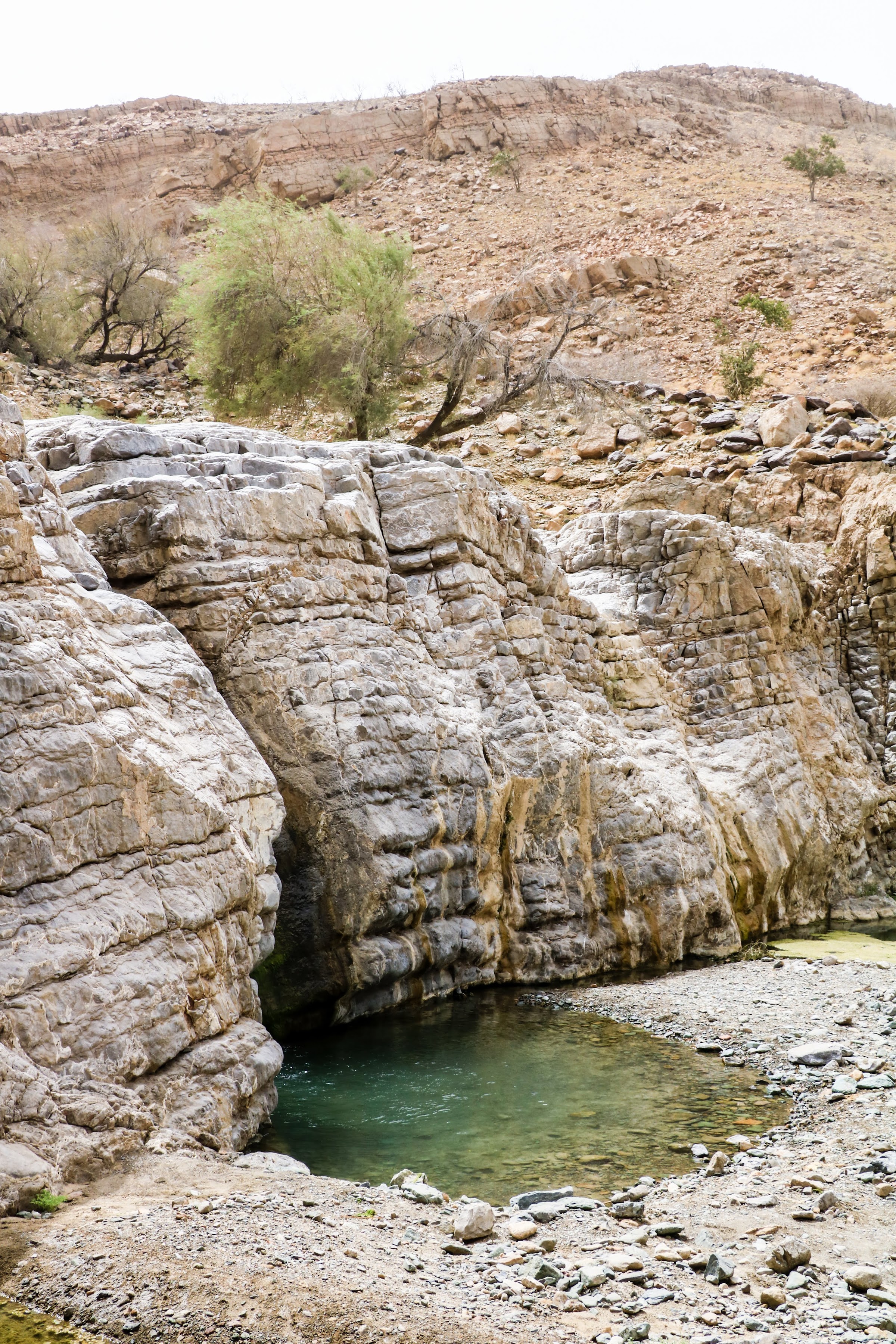 Erte Ale – a portal to hell

The next day was mostly spent driving, as we made our way northeast into the desert and the desolate land of the Afar people. We crossed miles of sand, acres of hardened lava rock and still we saw tiny villages with nothing but a few wooden huts, I have no idea how or why these people live here but they have survived here for years and will probably continue to do so for many more to come.

We didn’t arrive at our base camp until about 4pm, it was a small military camp with stone huts and a few camels. I guess they’re out there to offer protection to visitors after five tourists were killed and four more kidnapped by gunmen in 2012, but we were told there have been no problems since then. No need to worry, mum. We had spaghetti for dinner, packed our bags and left around 7pm for a night hike up a smoking volcano. 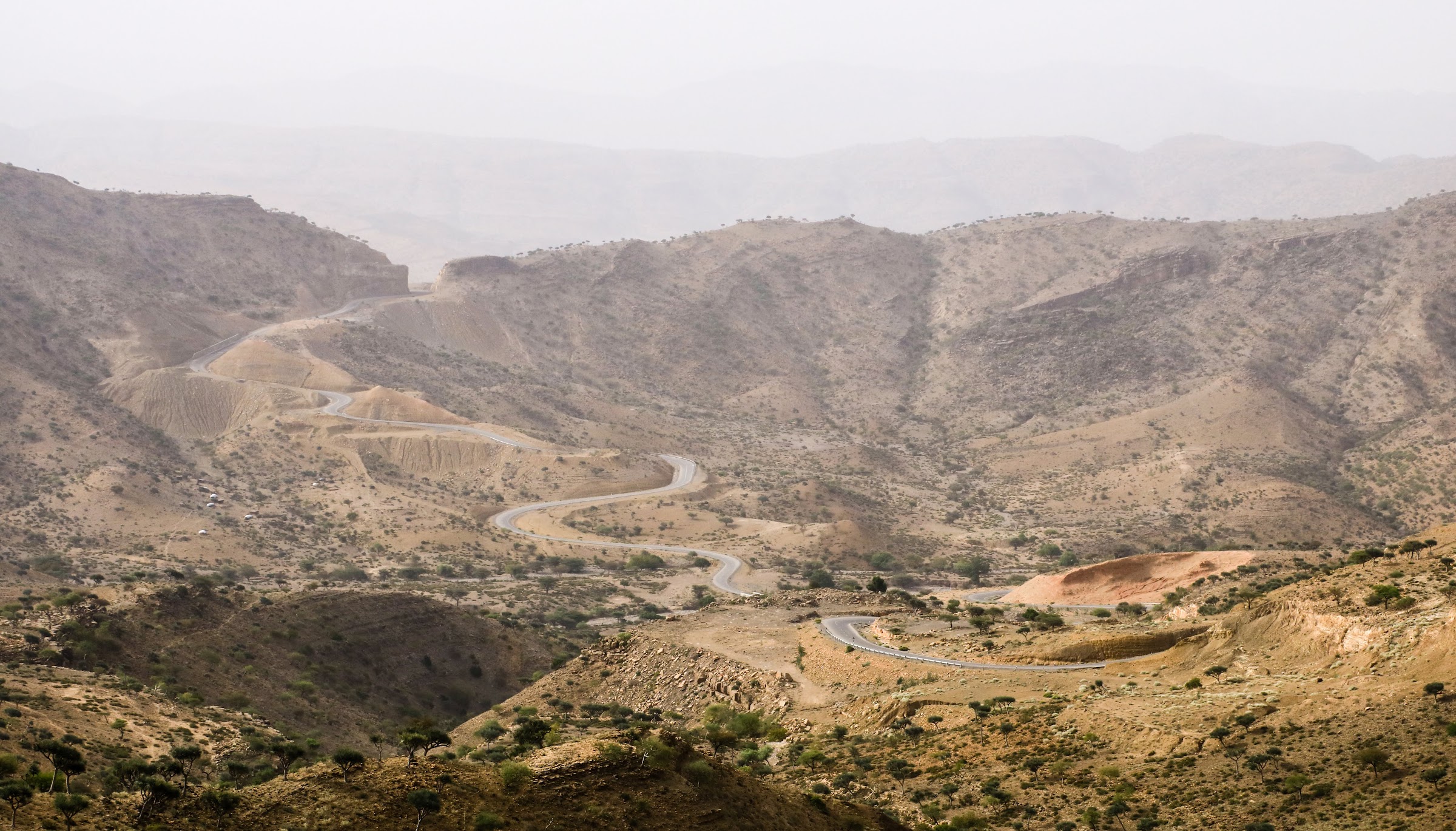 Erta Ale is ranked as one of the most alluring and physically demanding attractions of Ethiopia, because who wouldn’t want to climb an active volcano to see a lava lake? Take note… The guide books will tell you it’s the world’s only permanent lava lake, but this is no longer accurate as it randomly erupted 3 months ago. Still no need to worry, mum… The hike up was easy going, with plenty of water breaks. About halfway up we started to see a faint glow from the lava above and beside us…

When we reached the top we found a camp of wooden huts and a smaller camp of stone circles, the perfect place to sleep under the stars, weather permitting. But the real attraction was the smoking pit into hell.

So, of course, we walked straight to it, across three-month-old lava rock that crumbled beneath our feet, as close to the edge as we dared to try and catch a glimpse of the lava far below us while inhaling poisonous sulphuric fumes. Now would be the time to worry, mum. 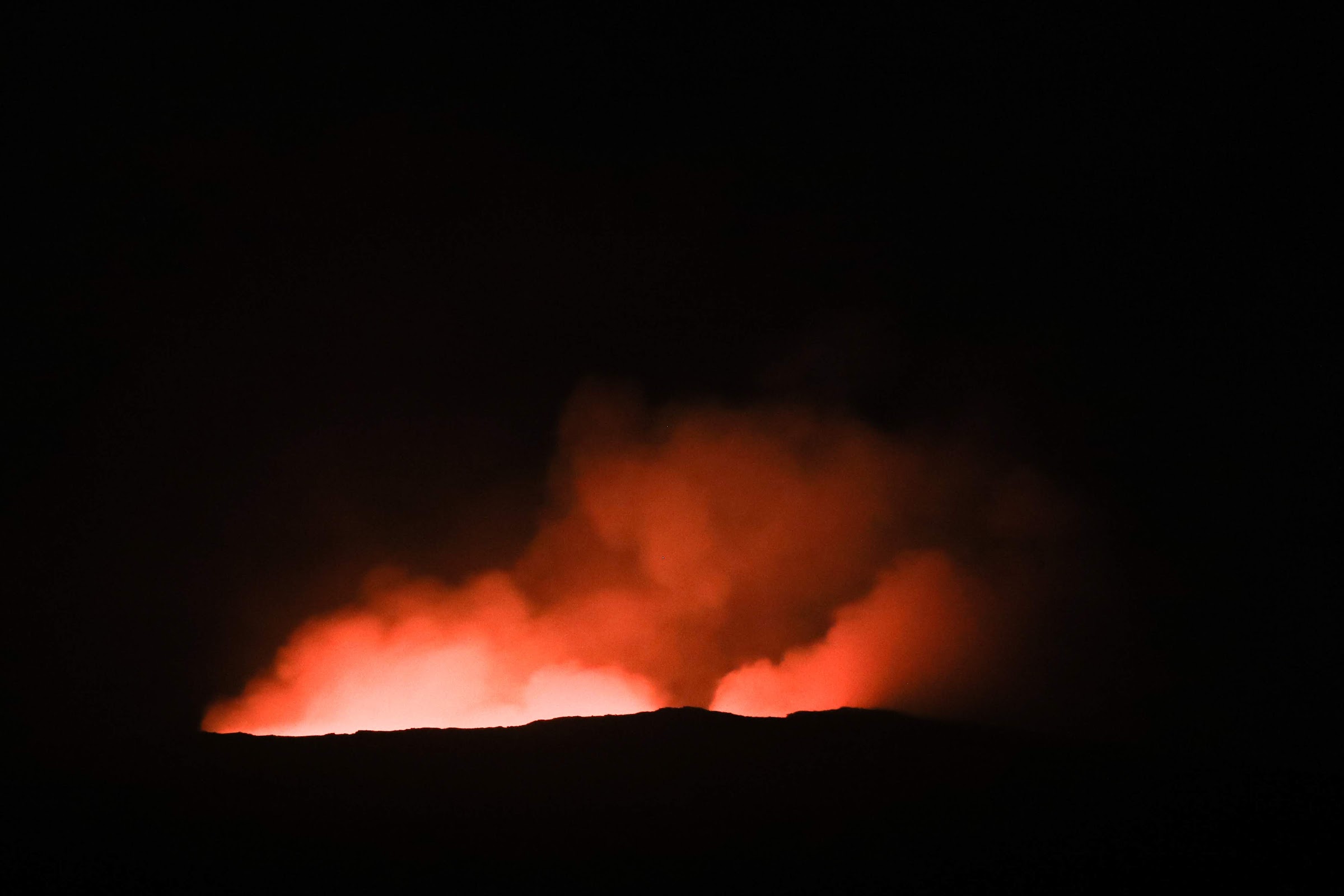 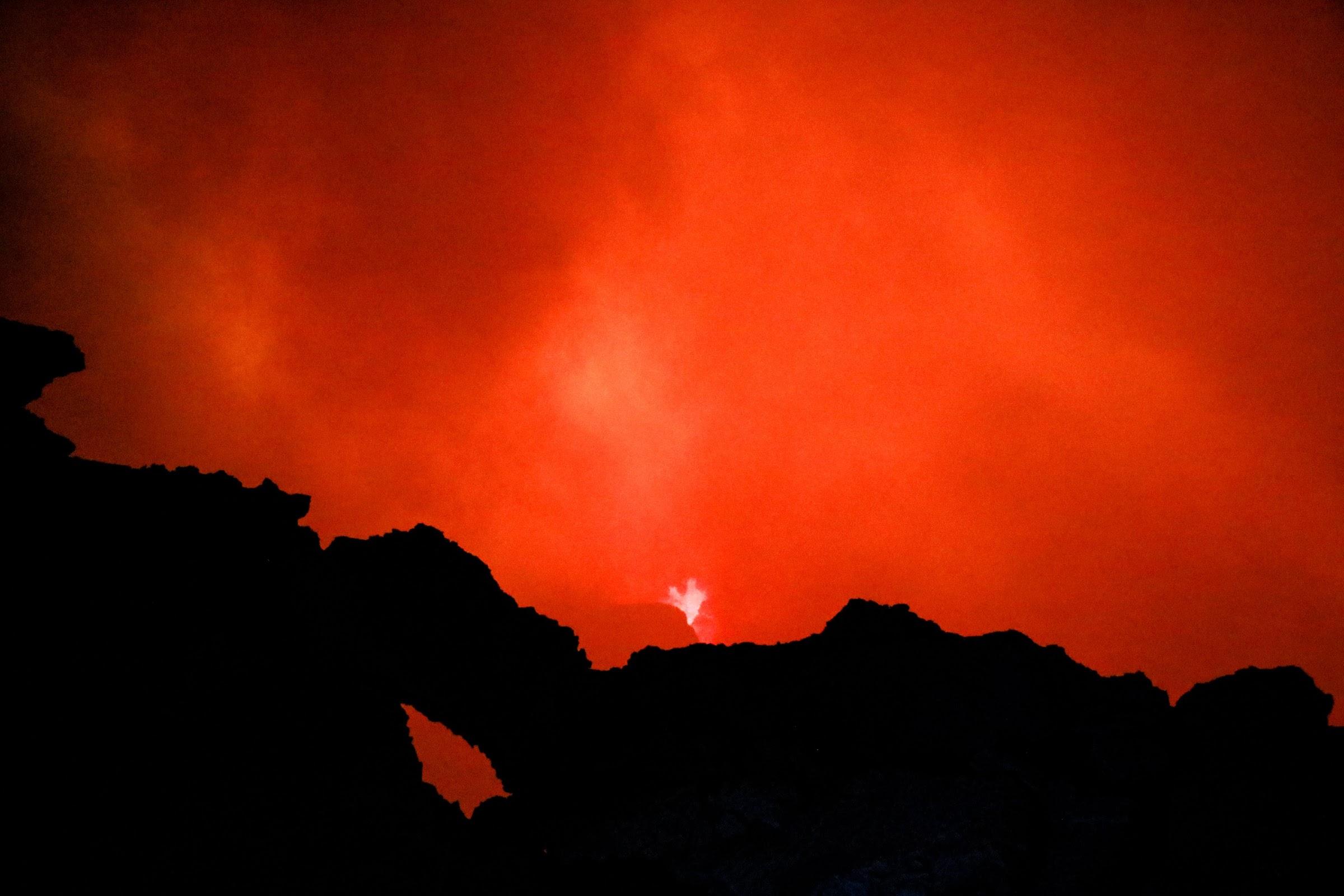 We walked around the crater to the left but the smoke was too thick (it literally choked us to tears) for us to see more than glowing rocks, although we saw a trickle of the stuff far in the distance. At midnight we made our way to camp, slept for 3 hours under the stars and then made our way back down.

We walked towards the right this time, crept to the edge, the smoke cleared and we saw not a bubbling lake of lava but a raging river of the stuff. It was insane. Actual lava. L A V A. Just there, falling away into the depths of the earth. I have never seen anything so equally mesmerising and terrifying.

The poisonous smoke soon hit us again and we were forced to stagger back from the edge, clutching scarves to our faces but unable to stop the burning in our throats. It was time to leave anyway, the sun was starting to rise and we did not want to be hiking in the heat of the day as it’s one of the hottest places on earth. The walk down was pleasant and we had a fabulous breakfast of eggs and pancakes waiting for us back at camp. 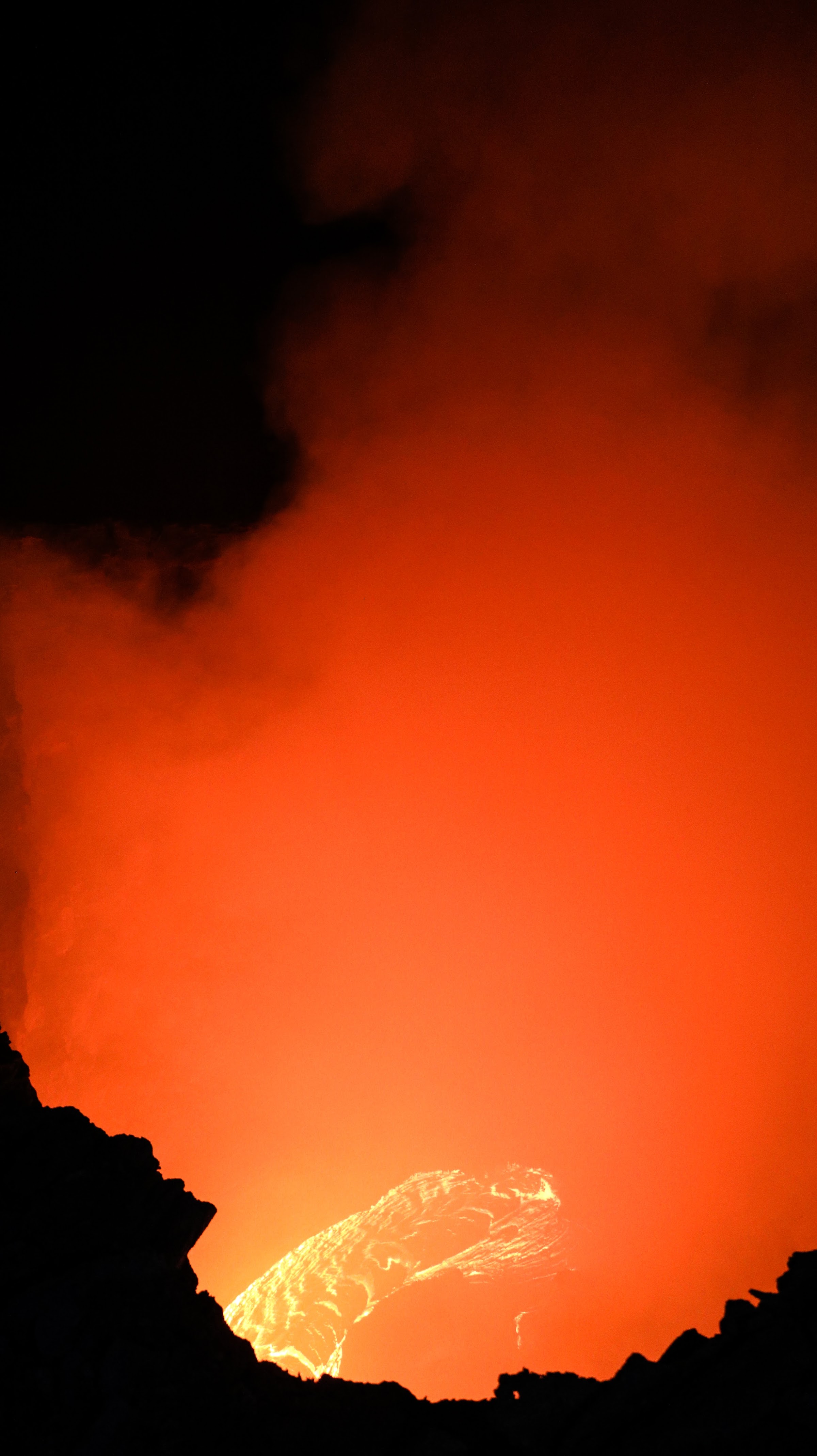 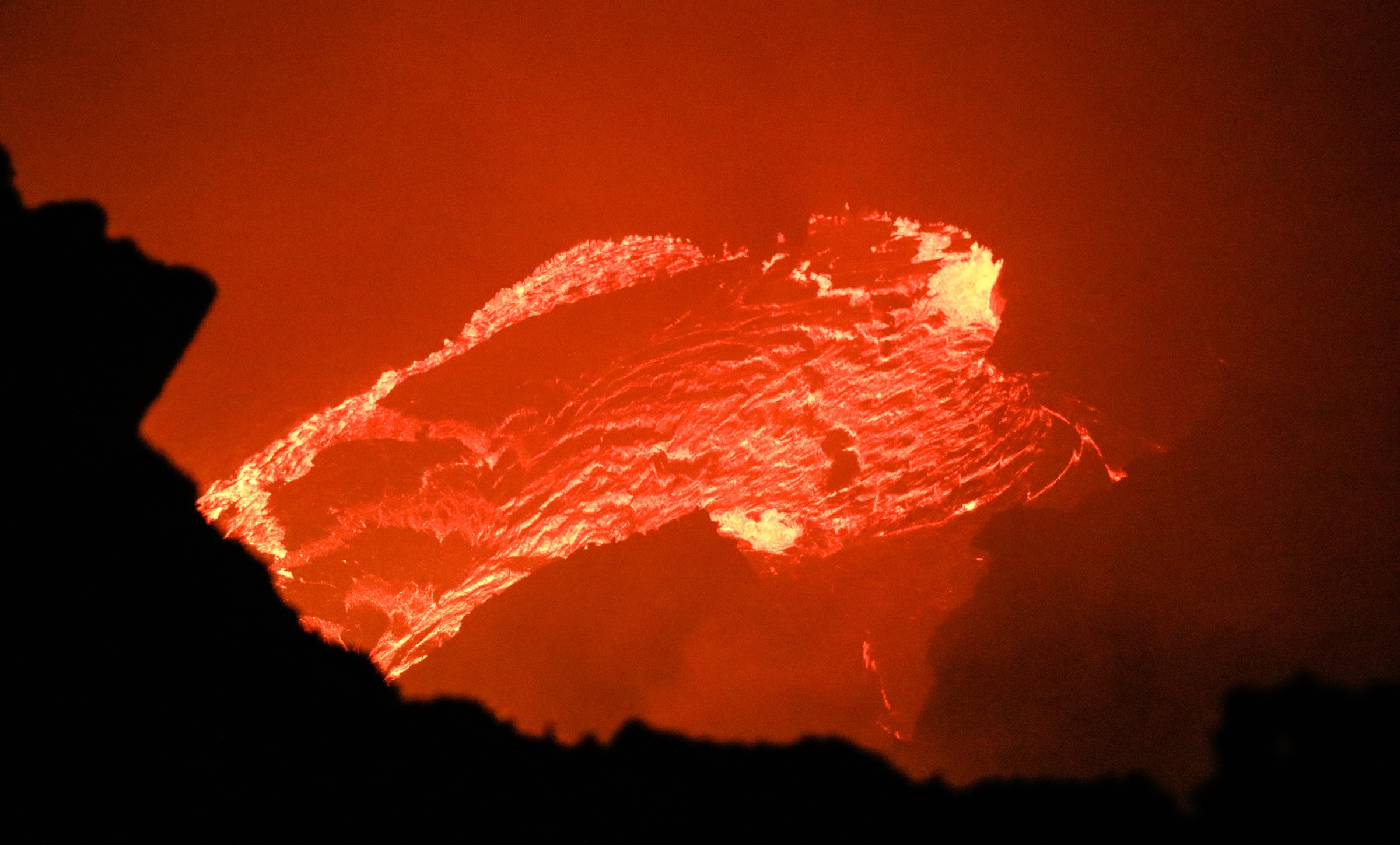 After another torturous drive back across lava rock and desert, into the winding mountain roads, we finally made it back to Abela where we had more spaghetti for lunch with an ice-cold beer, the best treat we could have asked for after such an intense few days of heat, dust and sulphur fumes. I just made it to Mekele airport in time for my flight back to Addis, and I was grateful to get home to a real bed and, more importantly, a real bathroom.

The entire trip was one of the best things I’ve ever done, and that’s saying a lot. This country is so incredibly diverse that you’ll find a new adventure every day. If you only have time for one thing in Ethiopia, make it a Danakil Depression tour. If you have time for two, don’t miss Lalibela. Better yet, why not do it all? Oh yea, that’s right, because it’ll probably bankrupt you. 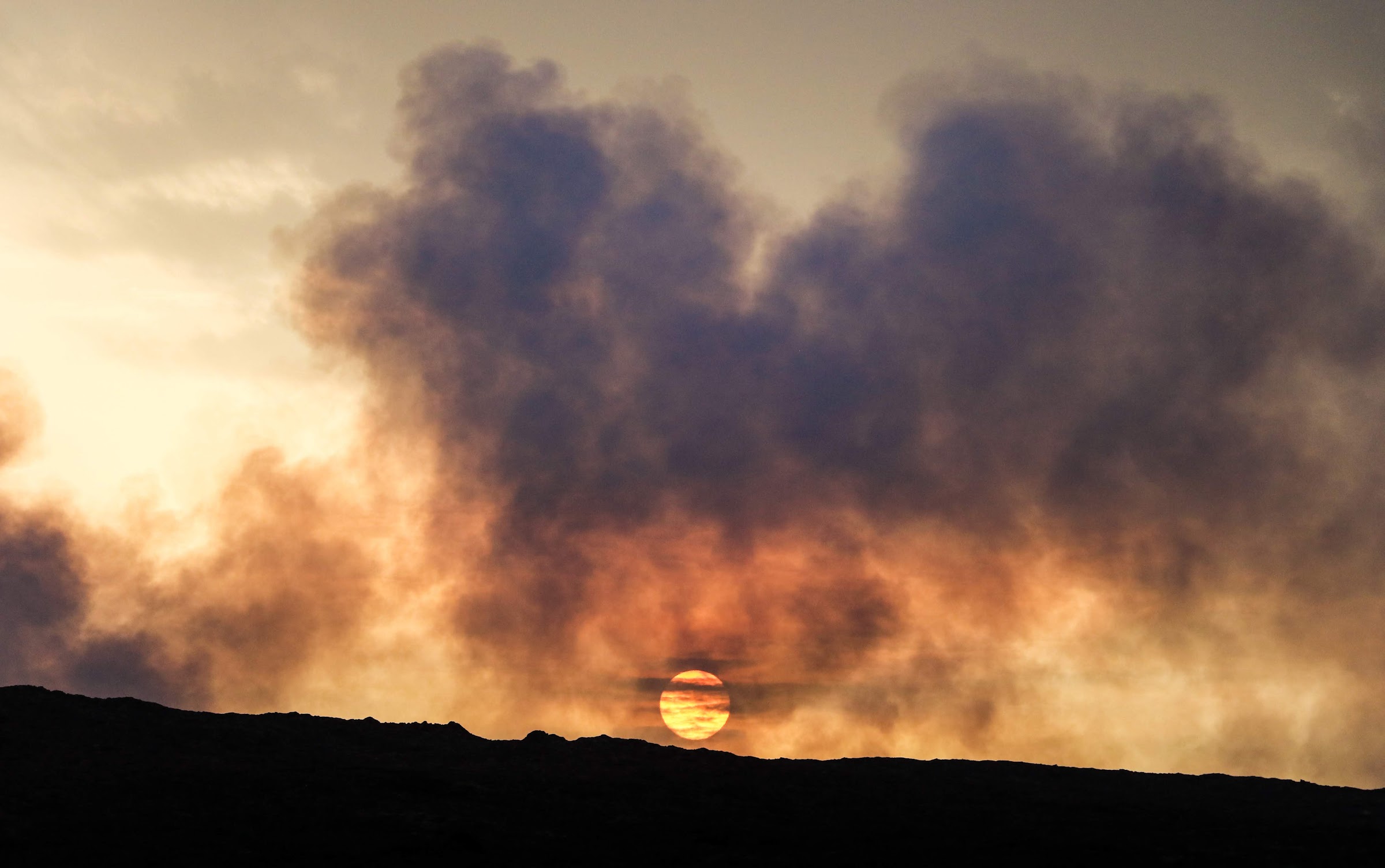