The Fish River Canyon is the second largest canyon in the world after, you guessed it, the Grand Canyon. It’s 161km long, 27km wide and up to 550m deep. You can visit the viewpoint to get a good look at it from above, but only registered hikers can descend into the canyon. Once you enter it’s up to you to make your way to the exit point, though there are a few ’emergency exits’ if something bad happens.

Disclaimer: This hike is bloody hard. Five days of walking over uneven rocks and boulders or through soft sand, hard sand, wet sand, dry sand, and deep sand. You need a high level of fitness and you need to pack well, bringing only what is absolutely necessary.

Day One: A Slow Day

Day One started out badly, we were up at 6am to get ready for the 9am shuttle, turns out we didn’t know there was an hour time difference from South Africa and we actually got up at 5am. We had a lot of time to kill, especially as the shuttle was late leaving. A shuttlebus full of 9 super-fit thirty-something Rah (more like Yah) Kids that became our “rivals” throughout the hike.

After handing in our paperwork (you need a weirdly vague medical check done before you arrive) we were driven the final 10km to the canyon lookout and the start of the hike, where we had lunch to prepare us for the descent. It was amazing to see the sheer size of the canyon from above, the second largest in the world after the Grand Canyon, back when I was so young and full of hope.

The descent was actually much quicker than we expected, there are chains to help you down the harder parts and you’re never too close to a deadly drop. It only took about 2 hours, then it was just an almost pleasant walk through the valley to the river where we had more food and a little paddle. Here’s a fun surprise, the 90km trail starts at the bottom, so what you’ve already done doesn’t even count.

The rest of the afternoon was filled with pain. Hiking through the sand with a badly packed 15kg backpack is bad enough, but when you have arthritis in your spine it’s on a whole other level. Imagine a knife stuck in your back that makes even breathing hurt while carrying your bag on top of it. Needless to say, it brought me to tears a few times this trip and you don’t get much sympathy for an injury no one can see.

We camped 4km from the “start” of the trail, it took us a few hours to go that short distance because it was hard climbing over unstable boulders and trudging through soft sand. We set up camp just a bit further down from the Yah Kids, had our first taste of the surprisingly delicious Mountain House freeze-dried meals with our hand-pumped swamp water and spent the night under the incredibly bright milky way. 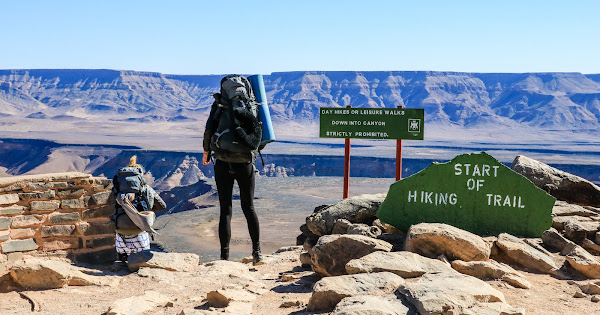 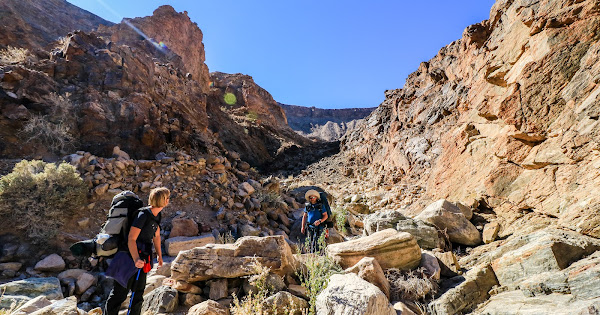 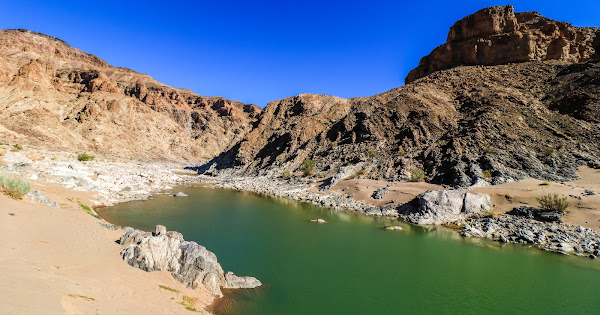 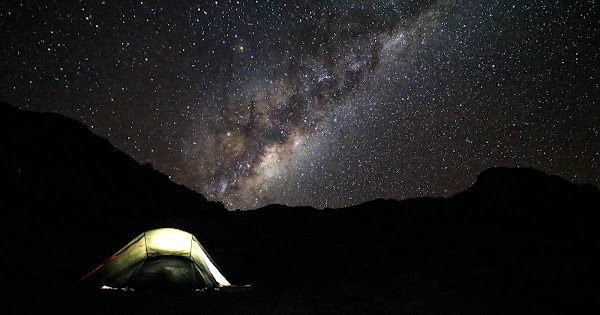 Day Two: A Day of Pain

I thought the first day was bad, but day two was worse for all of us. Everything hurt – shoulders and backs, legs and feet. My internal monologue was horribly pathetic. The trail was non-existent and we spent hours trying to pick the best path over rocks and through sand, crossing the river whenever possible to cut the corners of the tightly winding canyon. We kept passing and being passed by the Yah Kids and it got super annoying.

We had a little reward around 3:30pm when we arrived at the Palms Sulphur Hot Springs which sounds far more exotic than reality… a stream of scalding water that refused to mix with the cold river and burnt your skin more than it relaxed your muscles. We camped nearby, watched by a baboon who wanted to steal our food while we watched the stars, with the Yah Kids camped around the bend from us. 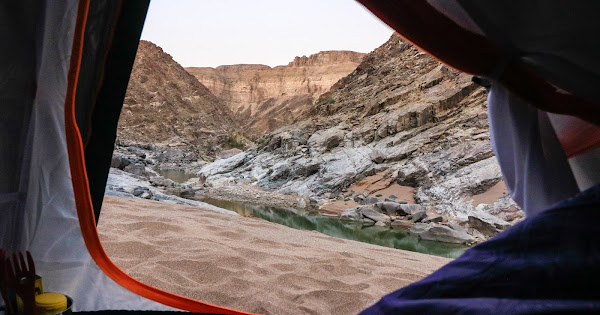 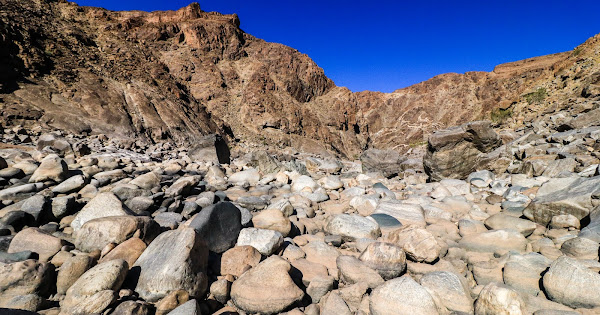 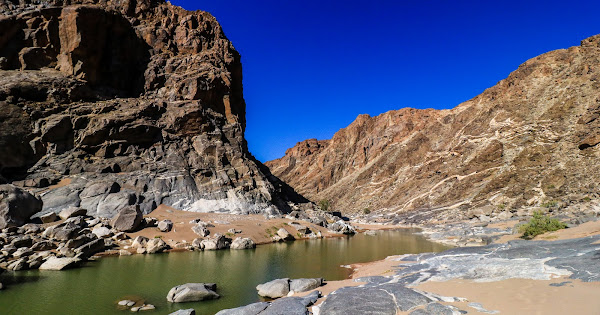 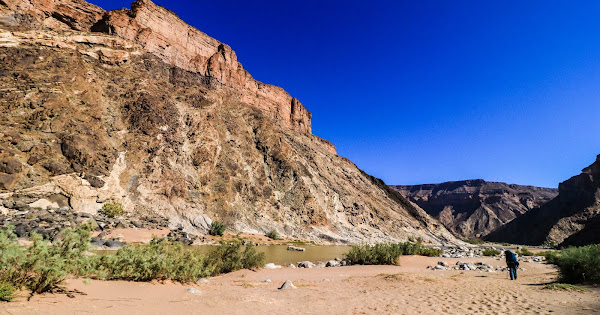 Our third day was better. The pain had lessened to a dull ache that encompassed my entire body, so that was nice. The morning was great, I was full of energy and hope that I might live to see the end, the canyon floor had widened in places and once or twice there was an almost-solid gravel path to follow, we even overtook the Yah Kids and kept the lead until 1pm. It’s the little things in life.

The swelteringly hot afternoon ruined all happy thoughts when we arrived at a huge boulder field followed by more sand. We camped in a dusty plateau that was windy and uncomfortable, and the Yah Kids overtook us for what would be the last time. We celebrated covering 20km by going to bed very early and having a terrible night’s sleep… 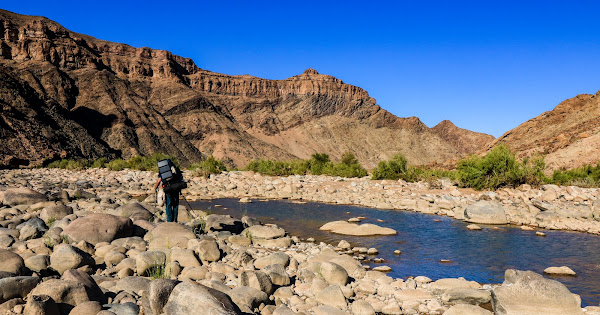 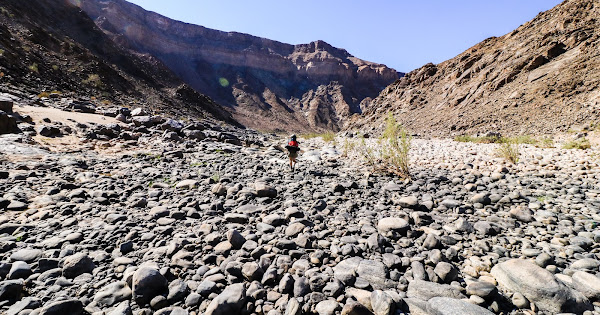 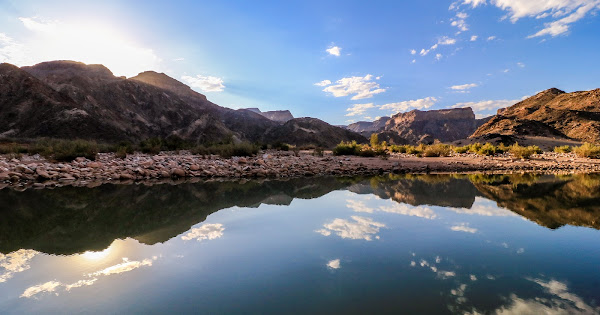 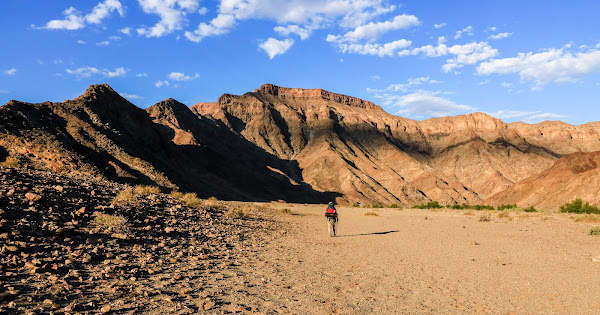 Day Four: A Day of Shortcuts

This was, in my opinion, the best day of the hike. It was a very long day but the trail was practically a walk in the park compared to the torment of the last three days. We walked another 20km but covered much more distance thanks to the magnificent shortcuts that will save your sanity, because it’s worrying to think you still have 50km to hike in just two days.

The first was hard to find and seemed impossible to climb up, so we tried to avoid it and realised our mistake when we got stuck in a boulder field surrounded by thorns. Luckily there was another shortcut further down the ridge because apparently a lot of people do exactly the same thing and a second option is needed.

Shortcut two was at the 50km mark and it was an easy climb up to the ridge where a very nice hard-packed trail wound its way through the hills and back down to a bend in the river. The third shortcut was another biggie and took us past the 60km mark to emerge near the grave of a German soldier lost in the war, not far from the river.

We pushed on into the late afternoon to camp near the final shortcut, sheltered by the trees, feeling very good about life. It was our last night, we had food and fuel left (it was a bit of a gamble having one fuel canister) and we seemed in good shape, considering. 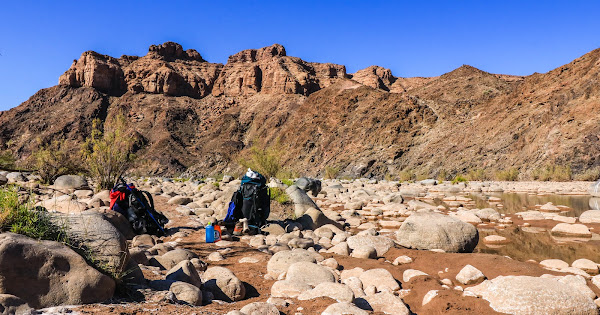 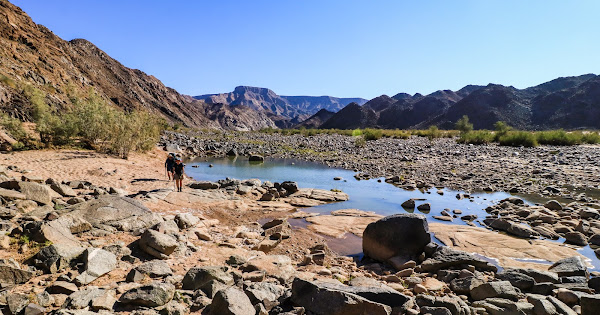 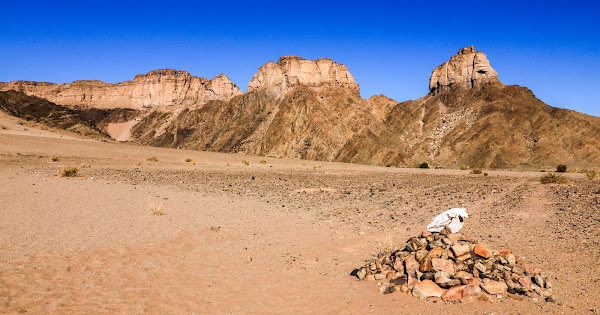 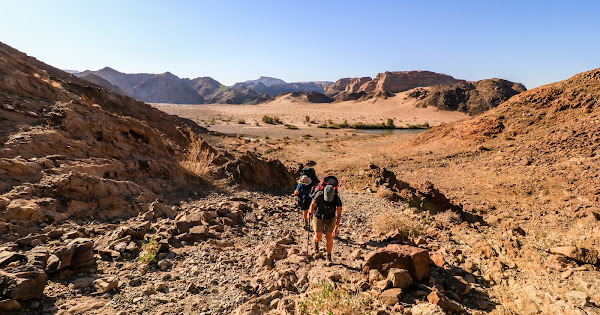 Day Five: A Day of Wondering “Where Are We Going and How Much Longer Do We Have To Suffer Through This?”

I woke up on the last morning excited to get back to the Ai-Ais resort for a cold beer and a hot shower by early afternoon, thinking we had overtaken the Yah Kids and got a good lead, but oh no. We took our final shortcut but then came to a part of the river we couldn’t immediately cross and had to go back on ourselves to do that.

We tried to take another short cut that apparently went the wrong way (even though I ran up there, could see where the trail went and where it came out, but oh no, don’t listen to me, what do I know) so we went completely off trail and just randomly went in the right-ish direction for an hour or so until we found the river again.

The final part of the walk was agonizingly slow because it just kept going, and going, and going. The pain came back with a vengeance and it was a miserable afternoon for me. Getting back to the resort did not give me the overwhelming relief I had expected but I was grateful that we had made it alive and in one piece. 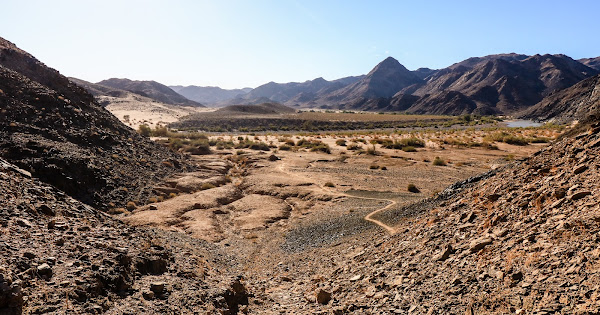 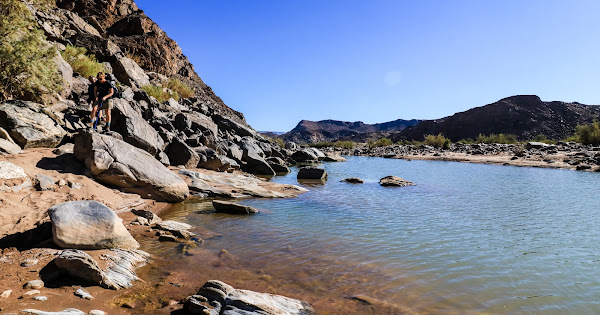 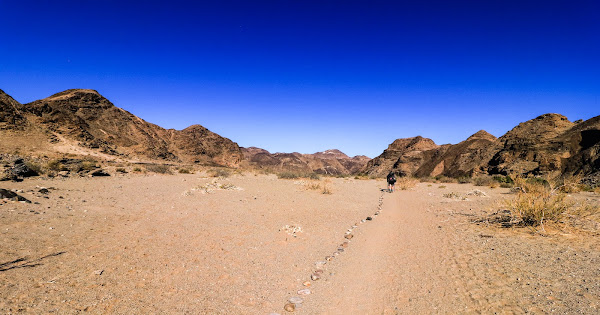 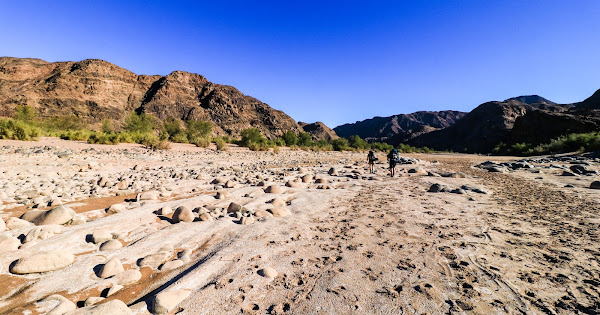 The hike was over, we had a full day to relax at the beautiful (if a little run down) Ai-Ais resort, a little oasis tucked away in the mountains. We had good food that wasn’t cooked in a bag, cold beer to drink, and a hot pool to swim in. All this, plus an hour of yoga, made everything hurt a little less and made the last five days seem almost worth it.

Apologies for the super negative post. It’s hard to think positively about an experience that caused me so much pain. However, I would still recommend this to those of you willing to take on the challenge. It’s a great hike in a beautiful country! 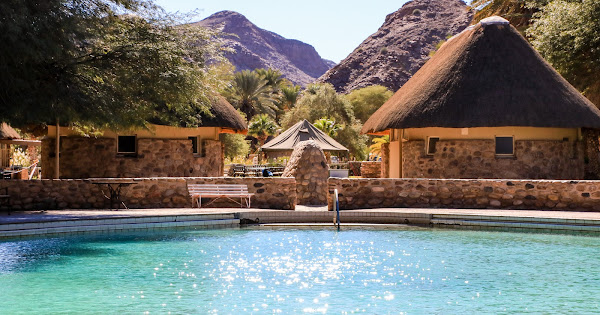 3 thoughts on “Hiking through the Fish River Canyon: 90km in 5 days”