There are many famous and not-so-famous destinations you can choose throughout Africa, and we were lucky enough to visit a few of them, but nothing will ever beat our six incredible days in Etosha National Park. You can’t see the Big Five here (no water buffalo) but you’ll be able to see the rest, along with a huge range of wildlife from big cats to big birds and everything in between.

It’s possible to book a tour on one of their safari jeeps, but we self-drove with Bucky and I would recommend this option so you have the freedom to spend as long as you want at each location, and it’s not too difficult to spot wildlife without a guide because the parking areas are so close to the watering holes. We camped in the park which is recommended so you can get up early and stay late to enjoy sunrise and sunset when the animals are most active. You can find up-to-date information on park fees and accommodation within the park here.

We started the day late thanks to a holdup at the entrance but it worked out perfectly. We saw a lioness and her five mature lion cubs playing at our first waterhole! We saw a ton of zebra, giraffes and hartebeest. In the afternoon we finally found a few elephants and even a black rhino! They clearly don’t get on, one of the elephants chased the rhino away from the waterhole. 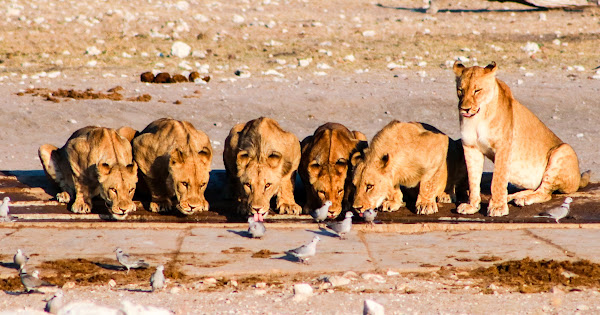 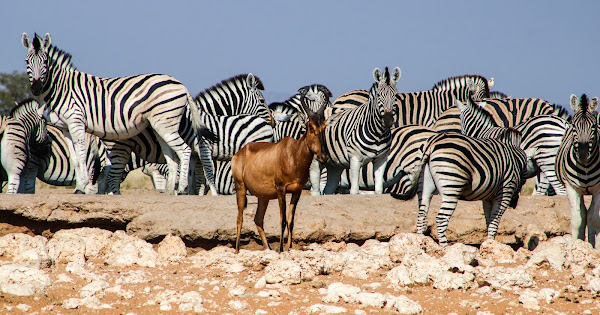 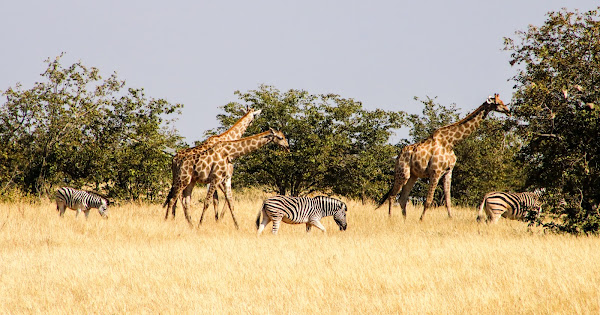 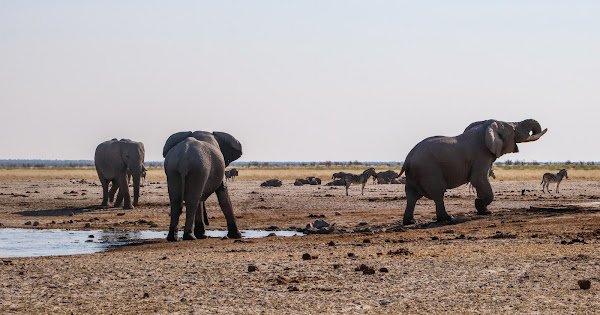 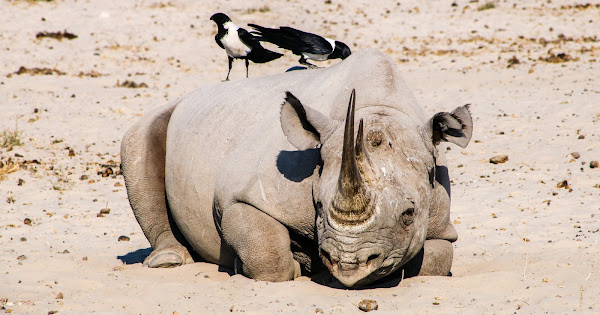 Camp: Halali
Highlights of the day: two male lions, one lioness with three mature cubs, one leopard, one elephant, one black rhino

Our first spot of the day was two male lions off in the distance. Then down the road, we found another lioness with three mature cubs playing in the long grass. We saw a leopard which is kind of a big deal as they are basically invisible! More elephants, zebra and giraffe, some impala and kudu, plus another black rhino at the campground’s waterhole. 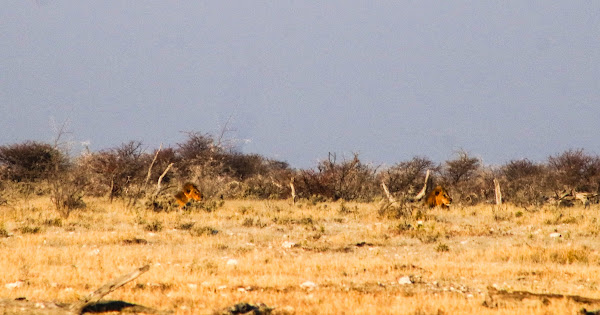 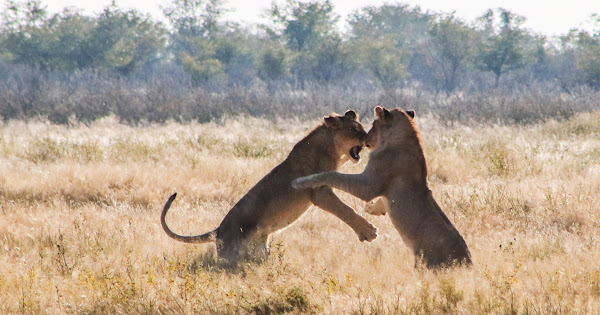 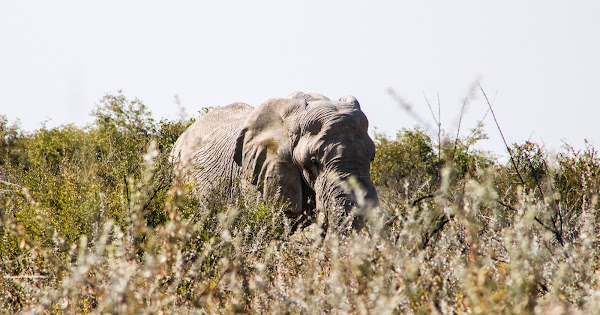 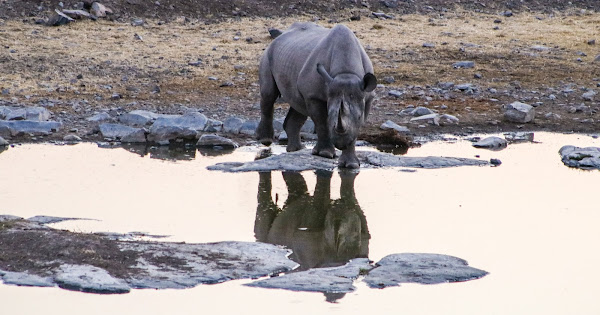 Our morning was uneventful, but we still saw lots of impala, kudu and some lovely birds. and we spent the hottest part of the day relaxing at the lovely campsite. In the afternoon we were lucky enough to see two mating lions! We also saw more elephants, giraffes and many zebra. We went back to the campground’s waterhole for sunset and saw two black rhino chase away a lioness, they obviously didn’t want to share. 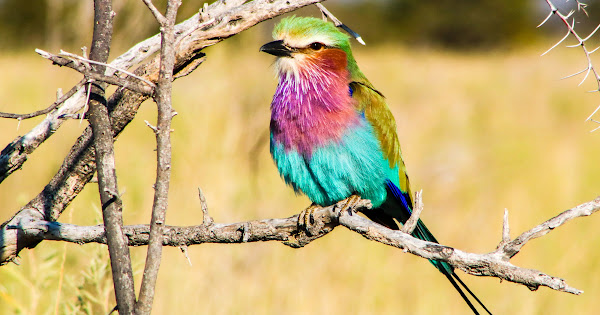 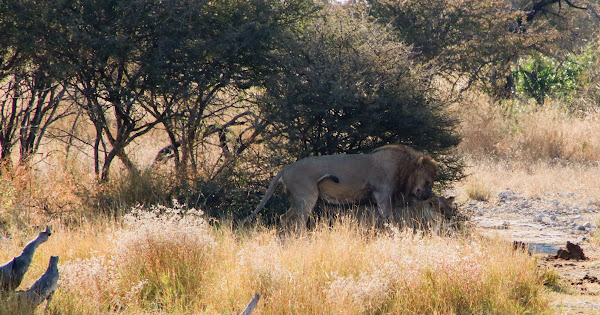 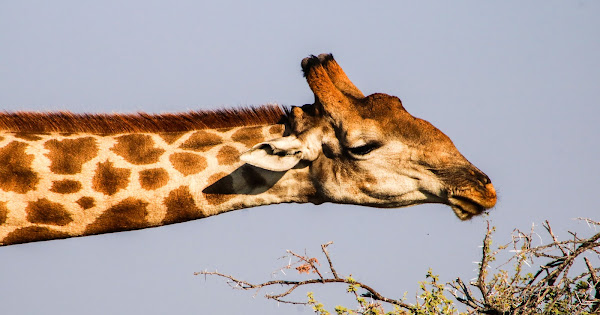 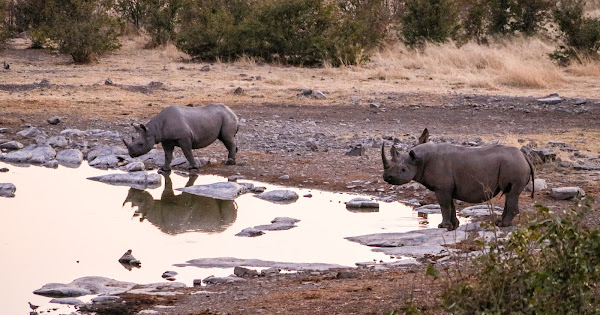 Camp: Namutoni
Highlights of the day: one male lion, one leopard, one white rhino and so many elephants

Today was a great day. In the morning we spotted one male lion napping in the bushes, and after seeing something cross the road ahead of us we slowed down and spotted a leopard right next to the road before he ran off. We saw a herd of four elephants, then another heard of eight with a few giraffes too. To finish the day off we spotted a white rhino at our last waterhole! 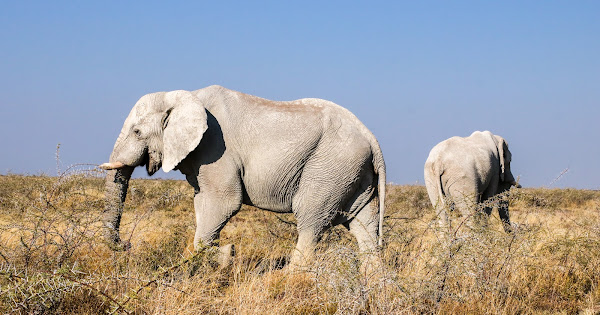 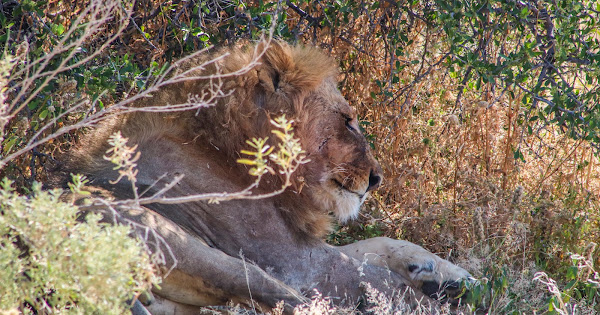 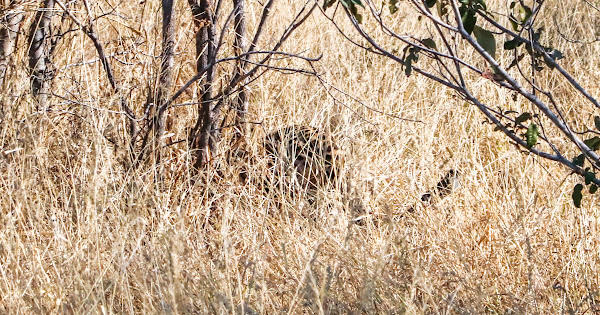 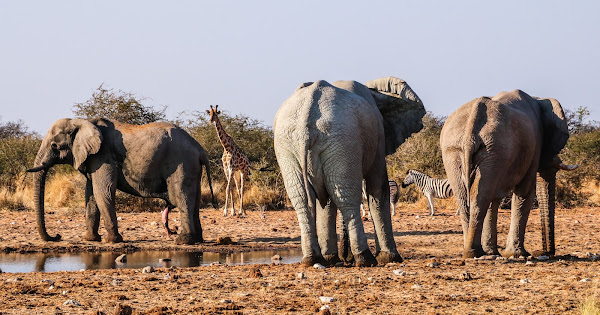 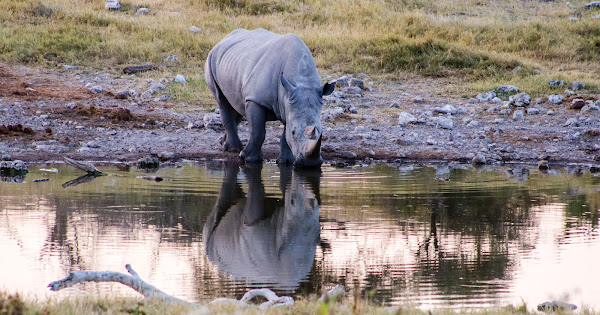 Camp: Namutoni
Highlights of the day: two white rhinos (one adult, one young), two mating lions, a herd of sixteen elephants and eighteen giraffes at the same waterhole

On our way back from a waterhole our path was blocked by two white rhinos, the mock charged the car and we realised we were blocking their path! We saw the same lion couple again, and in the afternoon we saw a huge herd of elephants and a tower (yes, that is the collective noun!) of giraffes. Magical! And of course the usual zebras, wildebeest, hartebeest and everything else. 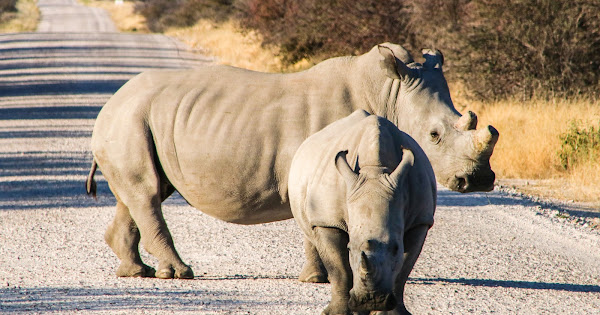 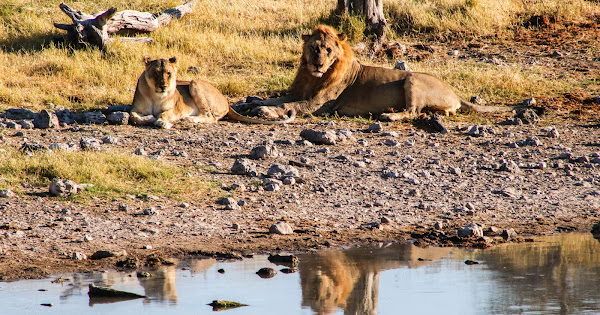 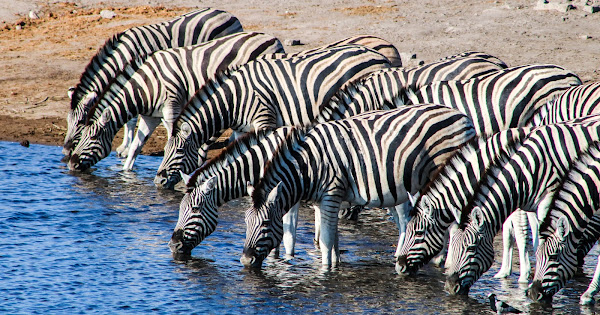 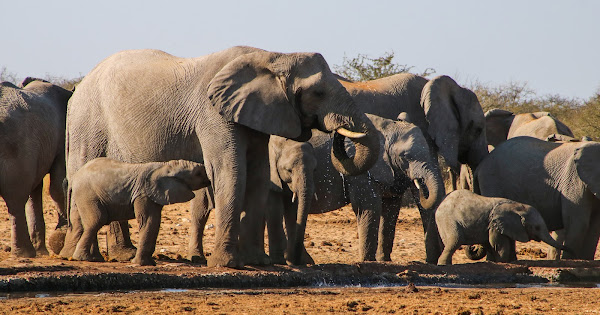 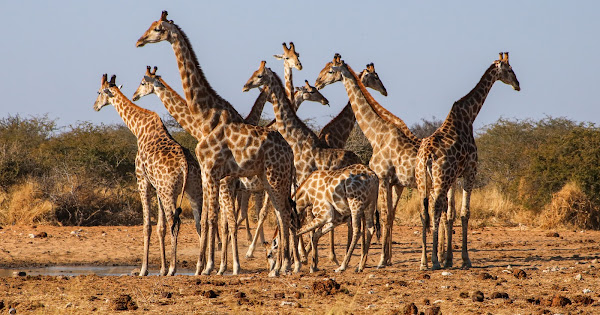 Highlights of the day: White rhino family and the two mating lions

Our last day was short, we only had a couple of hours before we needed to leave the park, but it was the perfect end to an already incredible week. We saw the whole white rhino family just chilling in the bush, and our fave lion couple just relaxing by the road. They could not have been closer!!! We could have reached out and touched him, although that would have been a terrible idea. 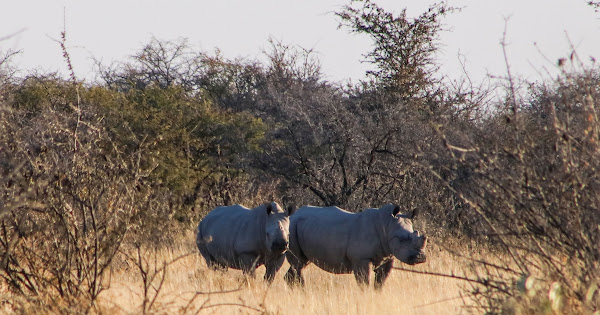 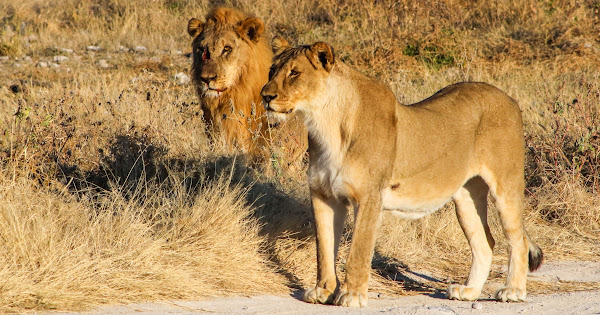 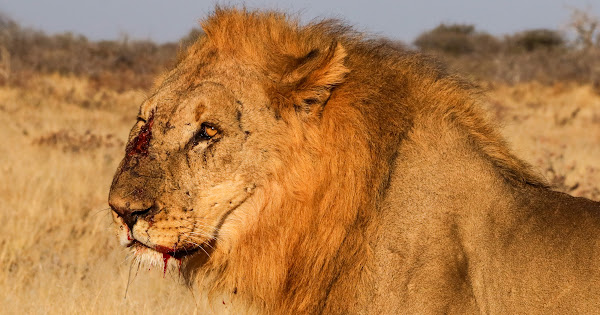 Etosha was absolutely the best safari we did, compared to Transfrontier and Addo Elephant Park in South Africa, Nxai Pan in Botswana and Hwange National Park in Zimbabwe. The campsites were lovely, the roads were decent (once you got to the busier roads) and there was an abundance of wildlife everywhere we went. 100% recommend!

2 thoughts on “Six days of safari in Etosha National Park”