After the absolute pain-fest that was the Fish River Canyon hike, I was a little apprehensive about tackling another long-distance, multi-day trek, this one high in the mountains during the middle of winter. Turns out I had nothing to worry about, it was practically a walk in the park in comparison.

Our first day started early after a huge breakfast at The Berg Backpackers, one of the cutest places we stayed in all of Africa. We hired a guide through Drakensberg Hiker and Gwain was friendly, knowledgeable and super encouraging when things got a little tough. We chose to carry our own food and equipment but you can book fully catered hikes through their website if you’re into that kind of thing. 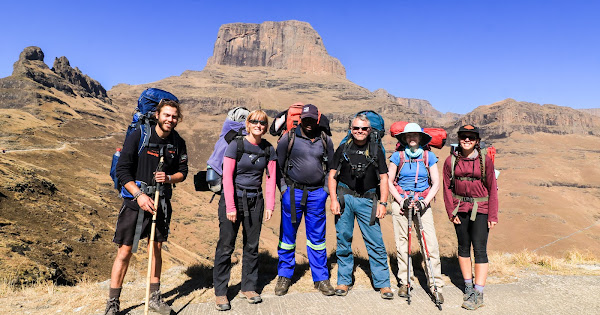 We were driven to the base of The Sentinel which was a great start to the day, instant views without any effort. It was a lovely hike following the contours of the cliffs, exploring random caves and enjoying a birds-eye view of the low berg.

It was great until we got to the chain ladders. I thought I was totally fine with climbing up a simple ladder, but when we arrived at the bottom and the wobbly chains disappeared over the almost vertical cliff face I was a little apprehensive. Once I started to climb I was pretty hysterical, but managed to make it all the way of both ladders without crying, or dying. 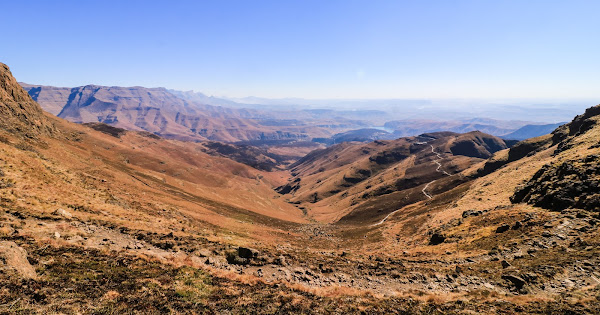 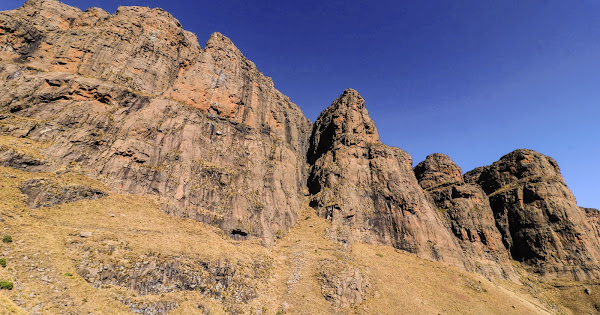 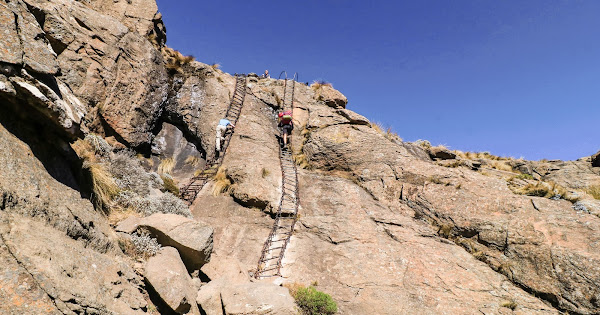 We had finally arrived at the plateau that crosses between South Africa and Lesotho multiple times over the course of the hike. The way to tell, according to Gwain, was the direction of the river. Running towards the cliffs was South Africa, running inland away from the cliffs was Lesotho.

We camped at an altitude of 2950m, above the amphitheatre and next to the second-highest waterfall in the world with a wonderful view but absolutely no where private to pee. And it was cold. Even with my brand new down sleeping bag and two layers of thermals I was frozen and got no more than a few hours sleep. 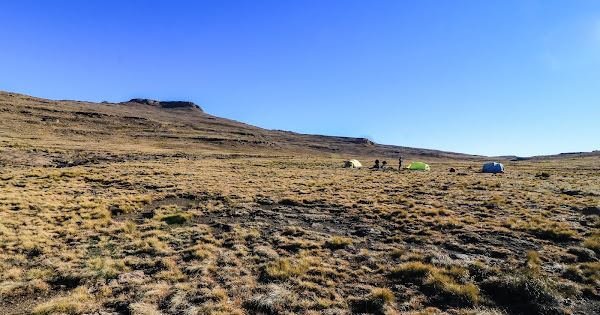 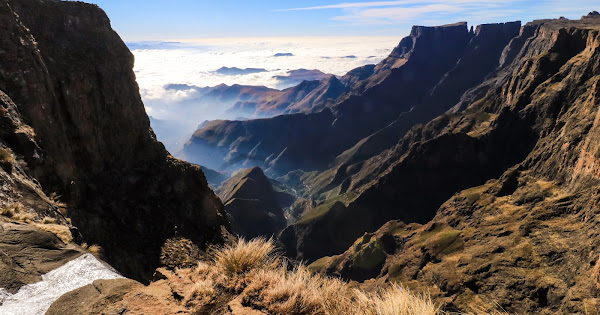 The next morning was a slow start, packing down a tent for the first time while you’re numb with cold is never easy, and by the time I had broken through the frozen river to fill my CamelBak the others had walked off without me, it’s every man for himself in this side of the family apparently.

It’s hard to distinguish between the second, third and fourth days. It was a lot of walking near the edge of impossible high cliffs (don’t worry mum, not too close), camping in temperatures far below freezing and being blown away by the sheer beauty of it all. It’s an incredible hike and surprisingly easy considering, with just a few hills to tackle along the way. 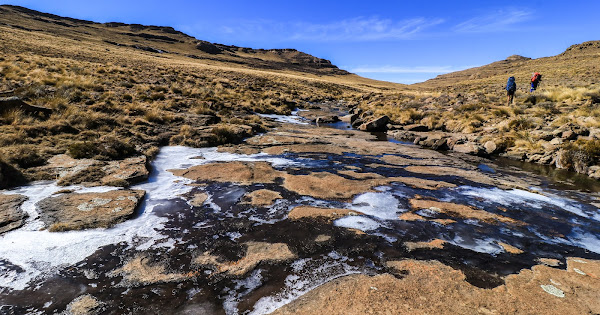 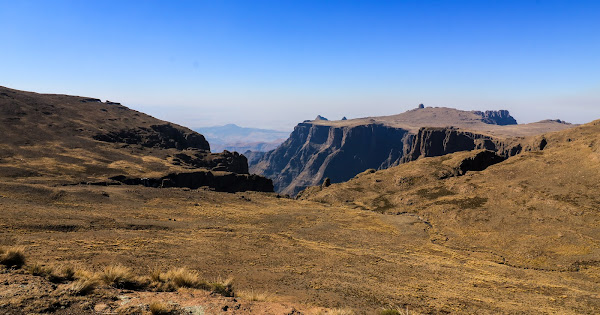 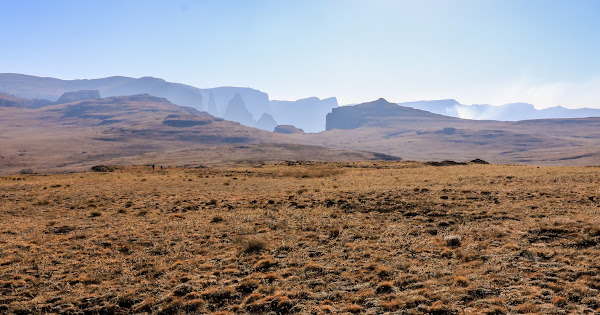 On the fifth day we had the option to attempt the Bell Traverse. Me being the kind of person who wings everything had no idea about this part of the trek. My auntie however had looked into it in marvelous detail and filled me with horror about this next part, and the guides confirmed our doubts. A long, narrow, dirt path with a high cliff on one side and a drop that would absolutely kill you if you fell.

We all agreed to skip it. No view is worth risking your life, and it is a risk when the path has no chains, ropes or safety features at all and one wrong step could end your life. Nope, nope, a million times nope. I was this close to having a panic attack just thinking about it, so there is no way I would have been able to even try, and that’s ok. It’s just a shame they didn’t warn us about the dangers sooner, so we could have spent that time taking on a different (much safer) side trip. 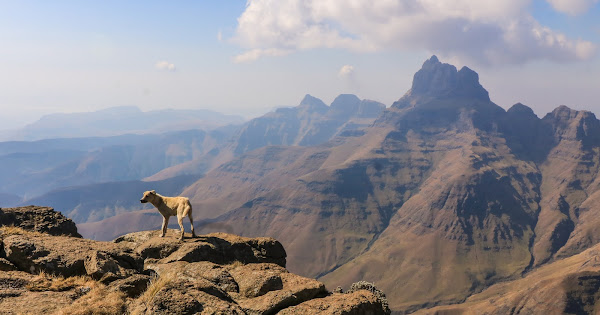 Our last day was my favourite. Not because we were at the end, and certainly not because we were going downhill (because the pass was a steep, rocky path where I fell over at least 12 times), but because of the views. We had finally entered the Low Berg, seeing the towering cliffs high above us, the rolling hills around us and the lush, green valley spread out before us.

Once we hit the valley floor is was an easy hike, up and down along the hills, eventually following the river to our final destination, the Cathedral Peak Hotel where we had a much needed pint and all got far too excited about the use of a proper toilet after struggling to even find a bush to use as cover on the plateau. 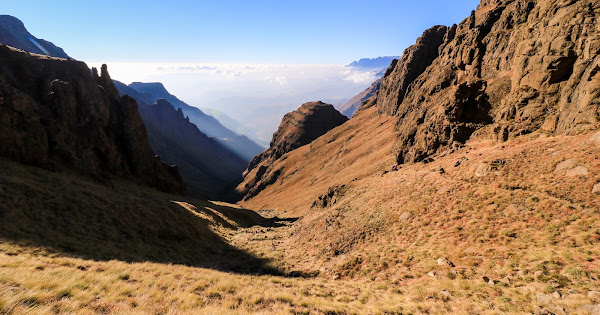 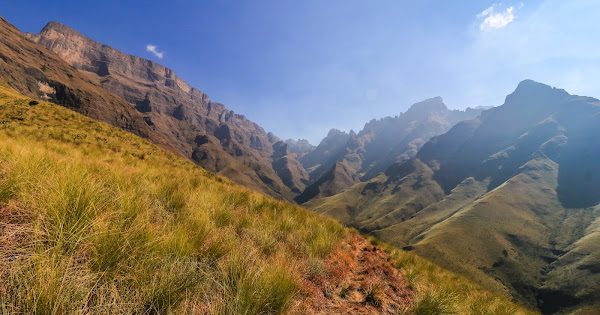 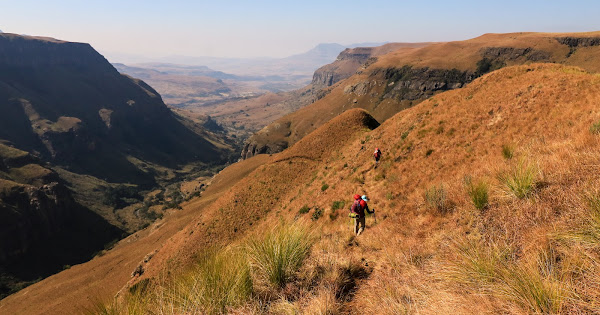 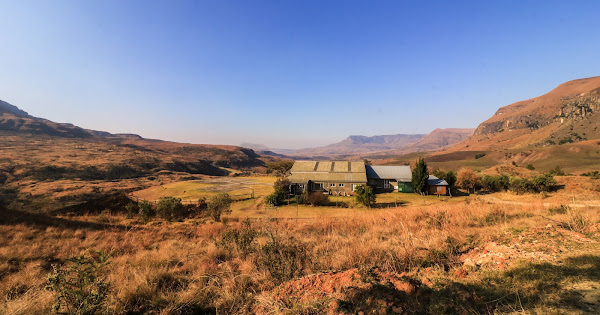 This really is one of the best hikes I’ve ever done. Physically it was almost easy with gentle hills and easy terrain, there were always incredible views and plenty of water (even if it did freeze every night). It was cool to walk between the two countries and to camp in them both. If you’re up for a very rewarding challenge then this is the hike for you!

4 thoughts on “Hiking the Drakensberg Northern Traverse: 65km in 5 days”