The highest mountain in Africa is Mount Kilimanjaro (5,895m) and it’s the most popular peak to climb. While you get extra cool bragging rights, you’re spending a ton of money for a somewhat mediocre hike. Why not tackle the slightly smaller Mount Kenya (5,199m) which is a much more beautiful, more enjoyable and cheaper hike?

We hired a guide and porters (because we thought we had to) and while it was an interesting experience, we found out once we arrived that it’s not strictly necessary. While hundreds cheaper than Kili it still cost $800 per person and can be a little awkward when you’re used to being as self-sufficient as we normally are. Read on, and think carefully before booking anything. 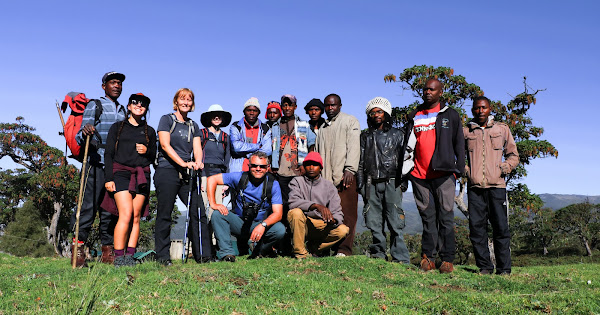 Our first day started badly and didn’t get much better. After a night at the – Hotel and a decent breakfast we were ready to be picked up at 9am to start the hike. We waited, and waited a little longer. Soon it was lunchtime and we were still waiting. Around 1pm they arrived, and we were off, or so we thought. We had to stop to pick up the porters and about 1000kg of luggage packed into a mix of broken backpacks and cardboard boxes.

Once we left Chogoria we made our way to the base of the mountain. It was a steady hill towards to gate, and a nice drive through the forest. At one point something fell off the roof and for some reason it was here that we stopped and were told to walk, while the truck carried on without us. It was apparently to adjust to the altitude, fair enough, but being made to walk at a snails pace for the whole 2km was unnecessary.

When we finally arrived at the Chogoria gate, at an altitude of 2950m, we were excited to finally enter the park and make our way a little closer to the peak. Nope, this was our camp for the night. It’s barely in the park and this day was a complete waste of guide, porters, chef and park fees. You could just as easily take a taxi here and start the next morning. 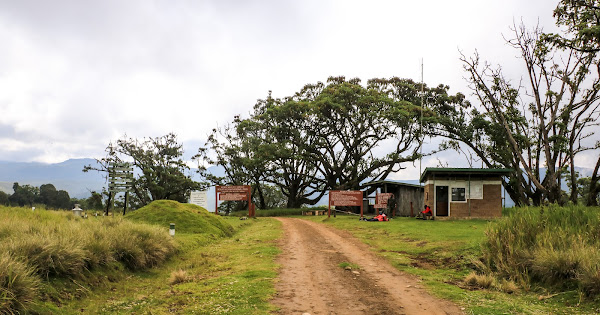 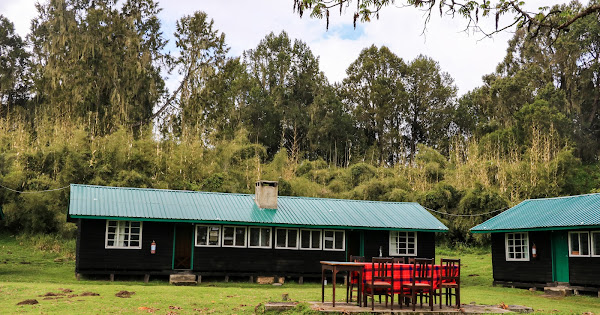 This day was almost as bad as the first. They told us it would be a 4-hour walk but we made it to our next camp, Road Head, in 2. We were made to walk at an excruciatingly slow pace to avoid altitude sickness, and they tried to make us take breaks every 20 minutes even though it was an almost flat trail, but when you’re only climbing a further 305m it’s really not necessary. It was just to kill time.

Our first campsite gave us a nice view of the mountain whenever the clouds cleared and we had a strange lunch of noodles and baked beans. It was hilarious watching the porters set up the tents, using the wrong poles and fly sheets and really having no idea what to do. Dinner was served around a roaring campfire, they somehow roasted a chicken!? It was a dry night under the stars. 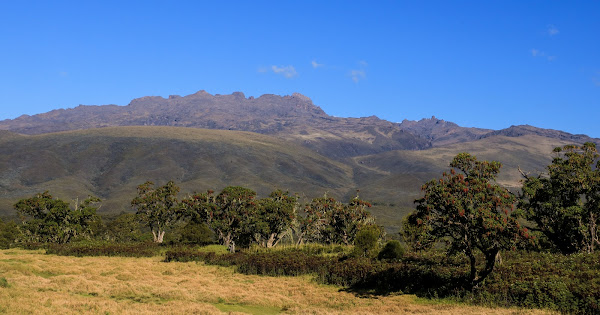 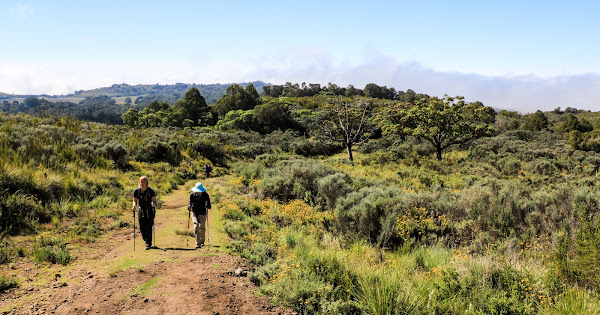 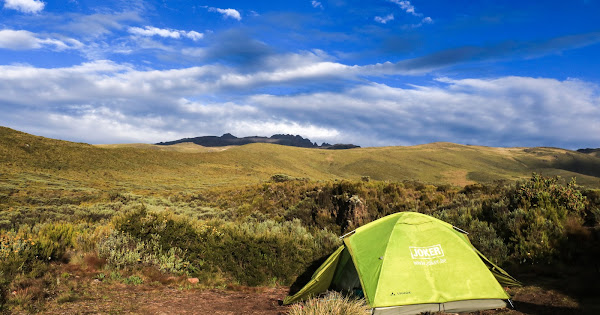 Today was a little more eventful. We got up early and had breakfast before taking a side trip to a beautiful waterfall and a few caves where we were able to get very fresh water. It took about 2 hours on a muddy, soggy trail but it was worth it. Once we arrived back at Road Head camp we got back on the road (because the road doesn’t actually end here) and started walking again.

Another 2-hour hike (not 4 like they said) and an actual hill later we had climbed a further 350m to the beautiful Lake Ellis. Although it was another super short walk we were grateful to arrive early to spend the afternoon relaxing in the sun before the clouds rolled in. We had stew for dinner around another impressive campfire and talked about the history of Kenyan politics. Luckily for us, it was still quite clear and almost warm. 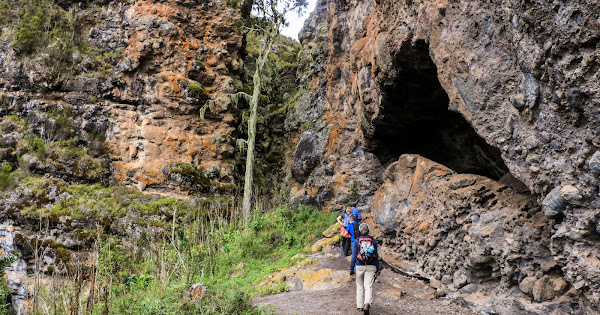 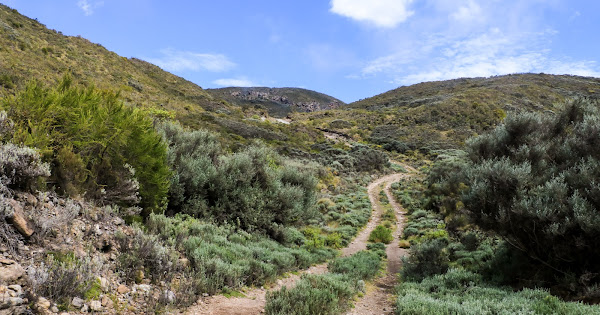 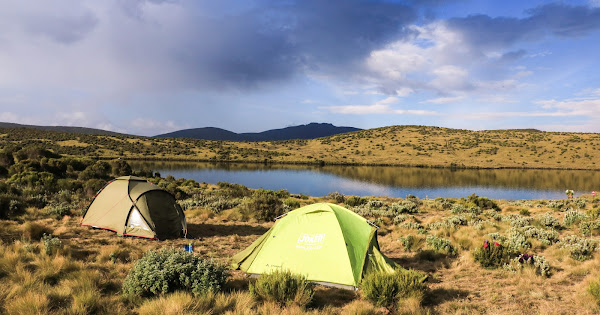 Today was the first day that actually made us feel like we were climbing the second-highest mountain in Africa, and not just randomly wandering around the foothills. We had a tough uphill first thing in the morning to the top of the ridge. From here we had a nice walk past an old plane wreck and the impressive Nithi gorge.

After another intense uphill through strange bushes and trees we made it to our most impressive campsite yet, Mintos Hut. There is a hut here used by the porters and a disgusting overflowing squat toilet. There was trash everywhere and it seems no one picks up their damn toilet paper anywhere. Ignoring this, it was impressive with many lakes and towering peaks surrounding us. And it was cold, we woke up to fresh snow on the peak. 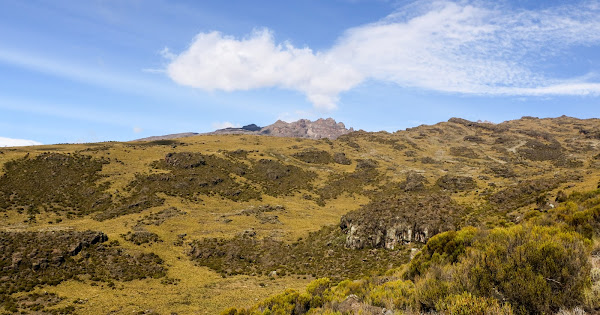 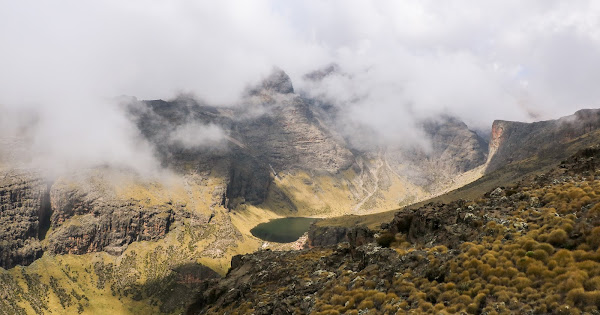 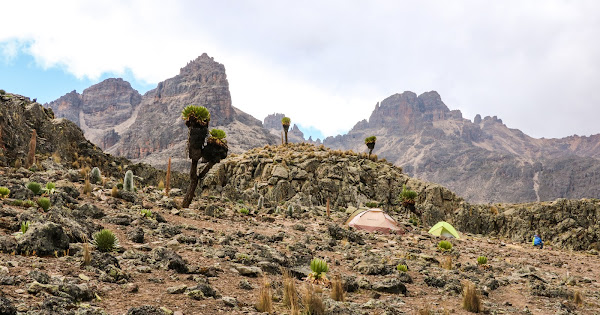 This was a savage day for all of us. It was non stop uphill to Simba Tarn which would have been hard enough without the intense fog that rolled in. We arrived at 11am which was far too early to be setting up camp and we were pretty annoyed that we didn’t stay lower until it started hailing and didn’t stop until 6pm. I had a little bit of altitude sickness by this point, but the headaches stopped after a nap.

We all went a little stir crazy being stuck in the tent for the entire day. We managed to escape for a quick lunch and it finally let off just in time for dinner. It was freezing cold and damp once our tent started to leak. It was really miserable, but worth it to make our ascent to the summit early the next morning so much quicker. 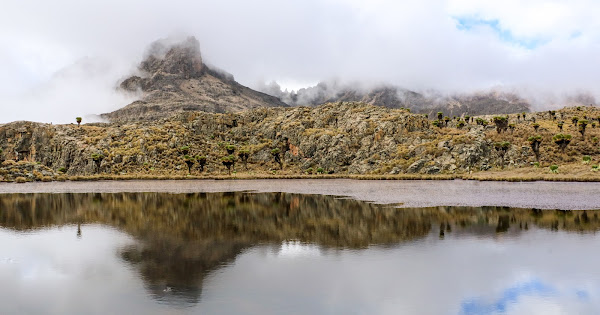 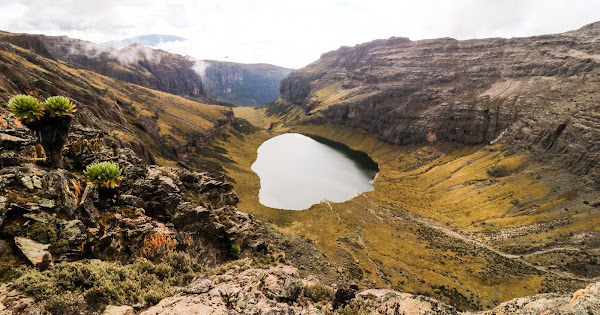 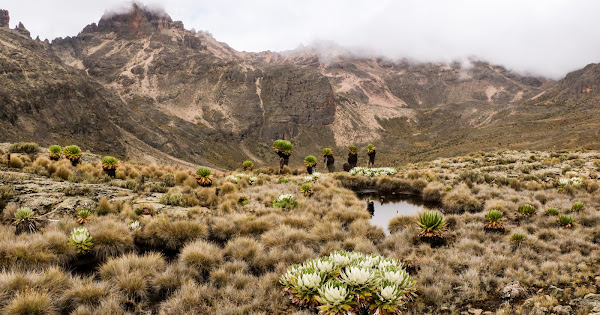 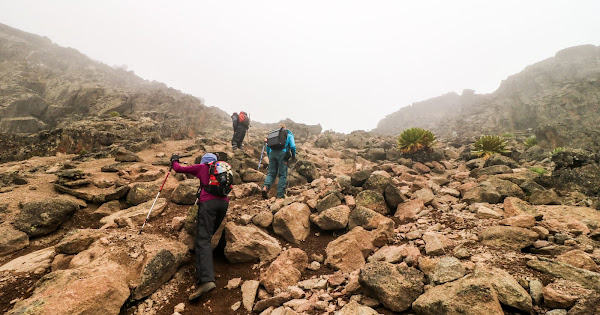 Today was a long, hard, beautiful, unbelievable day. We left camp at 5am after literally no sleep, thankfully the hail had stopped and we could even see a few stars shining. It was a dark, steep and difficult ascent to the peak but we made it just as the sun came up. The view is nothing like I’ve ever seen before. It really feels like you’re on top of the world!

We spent as much time as we could up there, posing by the sign and taking a ton of photos before it got too cold and we had to come back down, which was much easier as the sun had begun to defrost the snow and ice. It was an easy walk downhill to the gorgeous Shipton’s Camp at 4200m. We had lunch, dried our gear in the sun and enjoyed the incredible views. 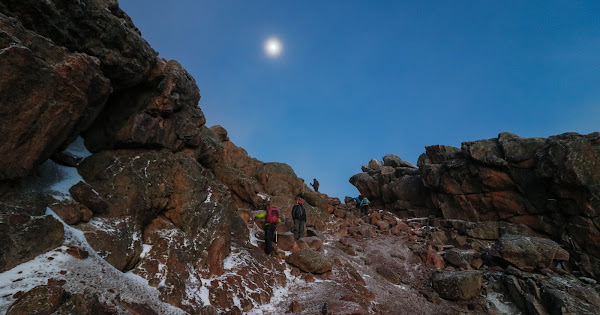 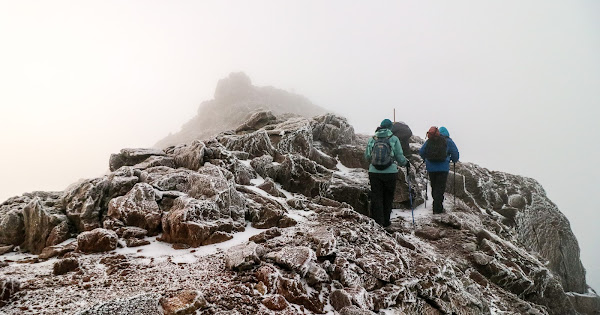 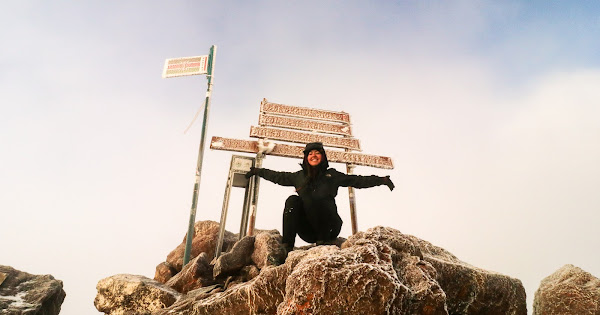 It was a wonderful walk downhill through a dramatic valley, even when the clouds rolled in we were still enjoying ourselves. That is until we reached a tarmacked road and realised we were just camping next to it and that our last day of hiking was just walking down it. Uh, no thanks. This was the most disappointing part of the trip and something they should have told us beforehand.

We were sick of eating the same food for every meal, tired and sore, damp and cold, our tent broke and we had to sleep in it anyway, we also had some awkward business with sorting out the tip. The porters all got to sleep in the cabins while we stayed outside, wondering why the hell we didn’t just get picked up that afternoon. 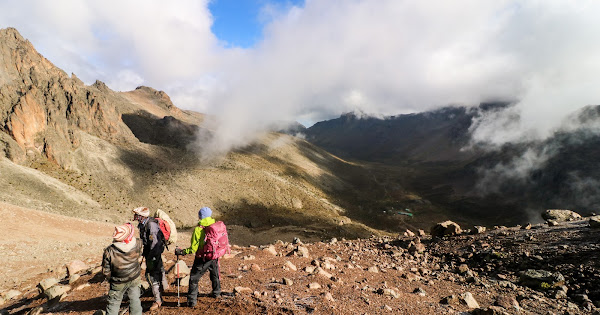 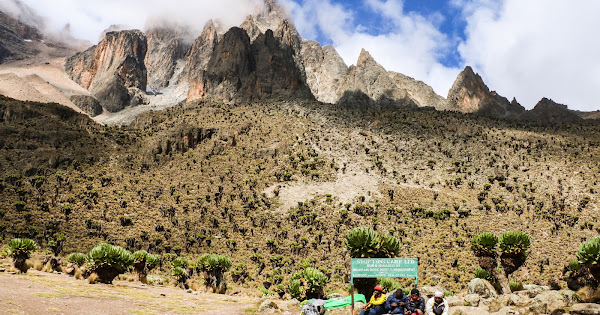 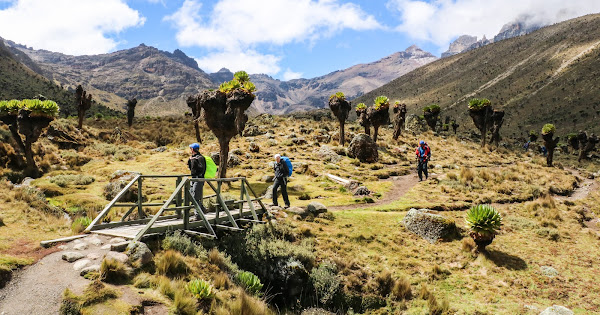 After the disappointing end to the last day, we organised to get picked up from where we were instead of walking the 9km down the paved road back which would have been pointless. We drove back to civilization and stopped at a random hotel to meet with the rest of our luggage, repack and shower before our evening flight to Zanzibar. 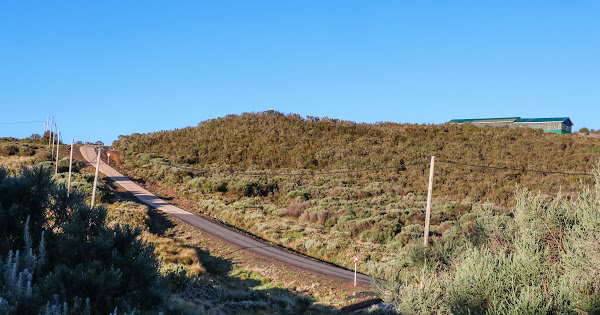 The reality of booking a tour

I have so many mixed feelings about this whole experience. The climb itself was gorgeous, hard enough to be challenging while still being enjoyable. However, it was our first experience having porters to carry our bags which was awkward when you’re perfectly capable of carrying your own equipment. It’s not something I would recommend unless you’re completely inexperienced at hiking or you want to feel pampered.

The biggest problem we had was with the equipment and the food. When asked if we should bring our own tents we were told that no, they had very good equipment that we would be using. This turned out to be a bit of exaggeration when both our tents and those of the porters either broke or leaked. The food was impressive considering we were on a mountain, but it was the same thing every day and with the money we paid we could have had a bit more variety.

The other problem we all had was with the length of the trip. When Dad was booking it, he thought about the recommend daily ascent to avoid altitude sickness (500m) and the company recommended to spend 7 days in total. After the hike, we realised this is completely unnecessary and mostly a way to charge even more. There’s no need to take 7 days.

From our experience, we decided the perfect hike would be 5 days, 4 nights. Spend your first night at the Chogoria Gate Camp (2995m), your second night at Lake Ellis Camp (3650m). The third night at Mintos Hut Camp (4200m) and the following night at Simba Tarn Camp (4595m) to make the ascent to the summit easier. The morning of the fifth day you’ll reach the summit (4985m) and then you can easily walk down to Sirimon Bandas Camp (2800m) to get picked up that afternoon.

It’s possible to do it even quicker (with a higher risk of altitude sickness), but I think that would be less enjoyable and the last day would be hell, leaving from Mintos (4200m) at 3am to the summit (4985m) at 7am and then down to Sirimon Bandas (2800m) by maybe 5pm. Nooooope. 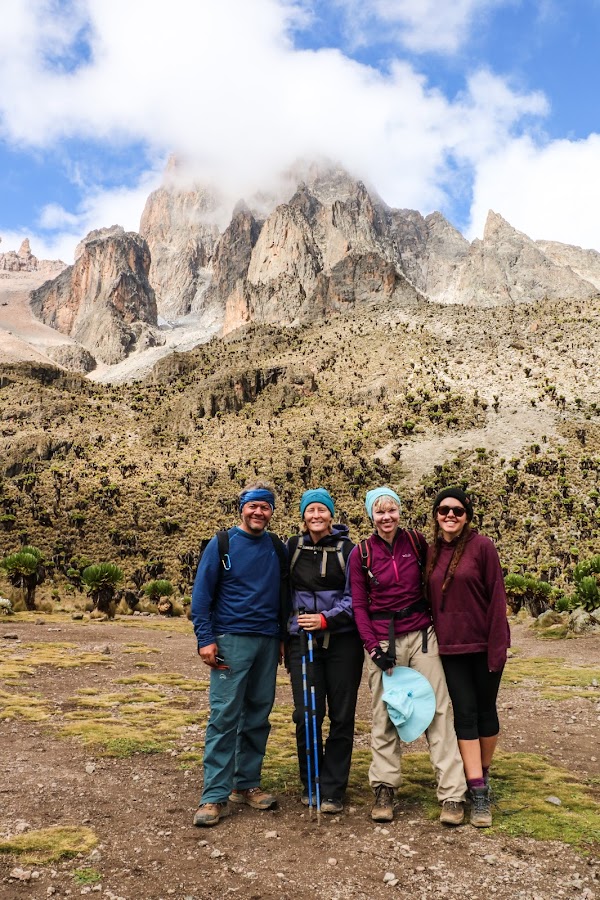 If you have any questions regarding the hike, the company we used or the mountain itself then drop me a comment below!