Rajasthan is the largest state in India and it’s incredibly diverse. You can ride camels in the desert, visit temples galore and eat some of the best food in India. If you’re on a tight schedule it’s possible to see the highlights in three weeks, but spend more time there if you can! This article was originally written for Modern Trekker.

After spending two nights in Agra, we hopped on the 11pm night bus and arrived 6 hours later tired, confused and not at all in the mood for the con-artists that are the tuk-tuk drivers in this city. We eventually found a man willing to take us the 2km to our hostel without ripping us off too much more than usual.

We stayed at The Mellow for two nights, just outside of the city centre, and it’s one of the nicest places we stayed in the whole country! The staff were so kind, they do good food in the rooftop cafe and the rooms were big, clean and air-conditioned, with en-suite bathrooms and lockers for valuables.

We spent a day walking around the “Pink City” and realised pretty quickly that it’s more like the “Terracotta City”. All the attractions are very expensive to get into, so we decided to be stubborn and only pay to get into one, the Hawa Mahal, which was a rip off because it’s more impressive from the street outside.

You can do an easy walking (or shopping) tour around the main sights of the city, and it’s not too pricey to take a tuk-tuk out to the Jah Mahal and the Amber Fort. The highlight for us was a sunset visit to the Monkey Palace, and after following a crowd of people we found a huge festival at a temple complex hidden in the hills. 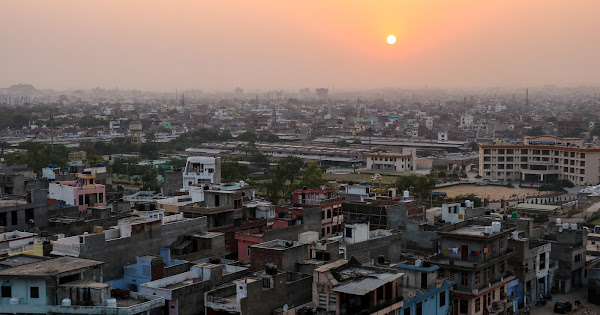 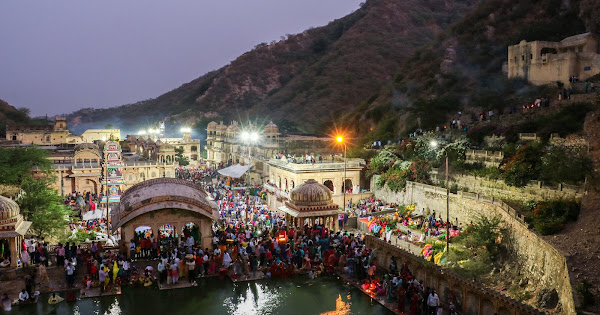 From Jaipur we took the 6pm bus, getting us (almost) to Bundi at 10:30pm. We were just dropped at the side of the road and luckily there was one tuk-tuk driver willing to take us the 2km into the city centre. If you’re alone someone will probably take you on their motorbike for a cheaper price, just be careful.

We stayed at The Raj Mahal Guesthouse for two nights and had a lovely time. It’s a beautiful building with incredible rooftop views, balconies and bathrooms in the spacious rooms and delicious home-cooked meals. There are a ton of good rooftop restaurants nearby that’ll give you perfect views of the fort, but most are caged because of the monkeys!

There’s not much to do here except getting lost in the winding streets lined with blue buildings, it’s a much more beautiful and peaceful alternative to Jodhpur (which we avoided after hearing so many horror stories of women being groped). You can see the Taragarh Fort for a hefty price, it’s apparently lovely inside, or the peaceful Sukh Mahal. Walk up the hill to Mordi Ki Chatri for the best free view of this colourful city.

The highlights of Bundi for us was being randomly dragged into an Indian wedding where we ate delicious food with the locals and took a million selfies, it was a cool experience! Then we found a puppy. A tiny little thing, furless from mange, weak from malnutrition, on the brink of death. So we decided to take her! We found a box and some rags, took her to the local vet and then onto the bus to make our way to TOLFA, the animal hospital in Ajmer. 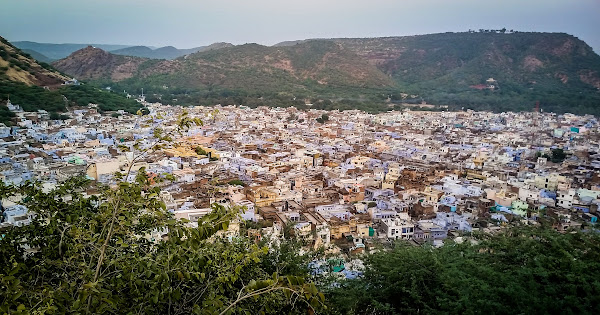 This was supposed to be a quick stop to experience the famous Camel Fair. It turned into a nightmare for me. After spending some time at TOLFA in Ajmer trying to get our puppy (we named her Bundi) some basic care, we were given a prescription and rode to Pushkar in the back of a truck with two women, a small boy, and a few goats. Within a minute of picking up the medicine, I realised my bag had been stolen.

I’ll save the story for another post, it makes me too sad to even write about it, but long story short I lost almost everything and as a result of this I absolutely hated Pushkar with every molecule in my body and I wish I never went to that stupid Camel Fair full of thieving scumbags who deserve to drown in human waste and rot in the innermost circles of hell for all eternity with their entire family.

We also stayed at a terrible hostel, Bonfire Pushkar was half-finished, dirty, mouldy, and the staff were very weird. I absolutely would not recommend this place and the only reason we stayed here was that it was the only place with beds left at such short notice.  I’m sure Pushkar is a lovely town at any other time of year, but if you really must experience the Camel Fair then be prepared to get ripped off, groped, mugged, or a combination of all three. 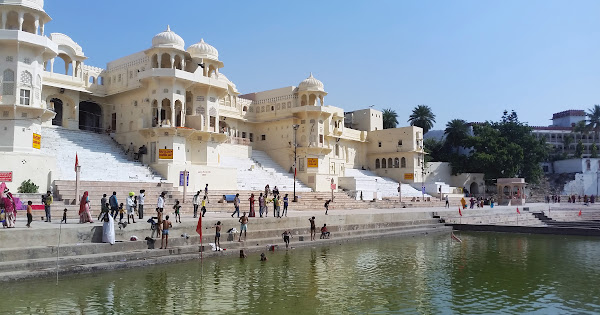 If you’ve ever seen An Idiot Abroad (if you haven’t, click that link to watch for free on YouTube!) you may have seen the episode where Carl Pilkington is forced to visit a rat temple in India. This is one of my favourite travel shows and I had to follow in his footsteps. It’s a two-day detour, but it’s worth it if you’re into tight spaces full of humans, rats and a smell like the butthole of Satan.

Bikaner itself is a pretty dismal place. We stayed at the Hostel Arya Niwas which was nice enough, very basic but with a cute little courtyard to relax in and you can get food here, which is good because there wasn’t a single restaurant around. Literally nowhere to buy food which is very strange in India, but there was a bottle shop. Priorities.

The whole point of going to this weird, empty city is to visit the weird, busy temple. We took a local bus from Bikaner to Deshnok, the actual location of the Karni Mata Temple. It must have been the busiest day of the year because there were about 10,000 people queued up to enter but we got to use our white privilege to get in through a side door and it was intense. Imagine being inside a trash pit except instead of trash it’s rats and rat poop and bits of food and humans that are pushing you along the narrow corridors and there are rats E V E R Y W H E R E and bowls of sour milk with rats in and did I mention the poop!? Anyway… 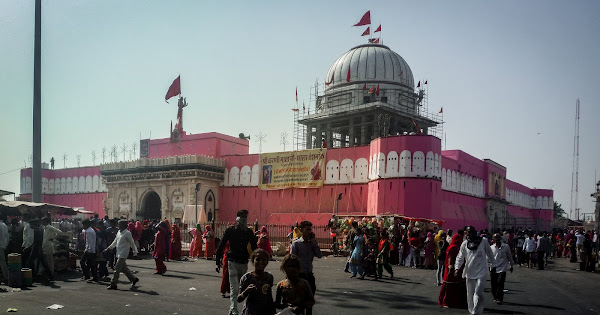 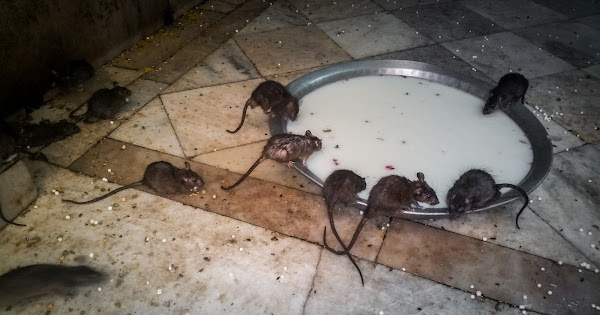 This city inside a fortress is definitely one of my favourite places in India. We arrived at night after taking a local day bus from Bikaner to the main city of Jaisalmer and rode a tuk-tuk into the fort itself, where you’ll find restaurants, shops and hostels galore. The gorgeous sandstone buildings and narrow, winding streets make you feel like you’ve gone back in time and it makes a nice change from the chaos of the bigger cities.

Most guesthouses will offer some sort of “Desert Camel Safari”. There are hundreds to choose from, they all sort of offer the same thing but you can tailor it to your needs and some are more pricey than others. Bonus points for finding one that will give you dirt-cheap accommodation in the fort, we stayed at the lovely Shiva Guesthouse and had our own private room with en-suite for $1 a night, plus they have a great restaurant and the staff are amazing.

On the other hand, our “Desert Camel Safari” was a bit disappointing. We chose not to ride the camels because they looked sad, so we basically paid 2000R (£22) to be driven 15km into the desert, eat dahl and sleep in the sand with the beetles. I probably would have found this to be a magical experience if it wasn’t for the beetles, but the guys rigged up a sort of safety net for me and I was so grateful. Also, I recommend taking alcohol and a deck of cards. 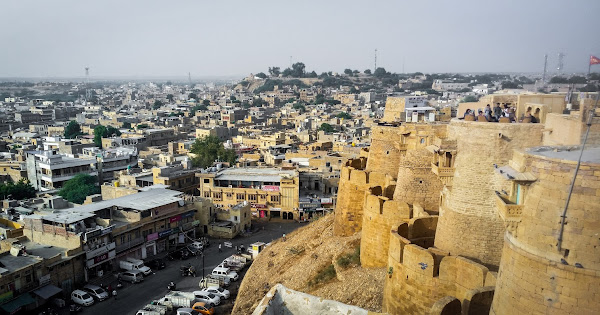 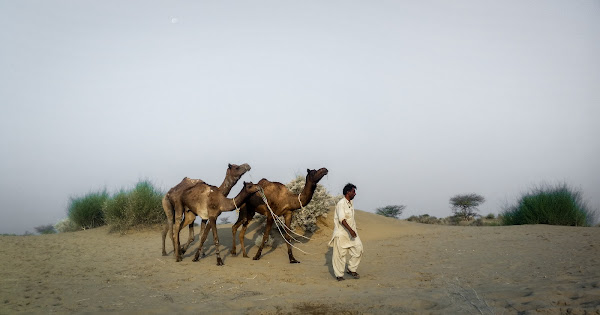 Udaipur – the city of lakes

Udaipur is known as the “city of lakes” and it is stunning, I immediately fell in love with it. We spent some time walking along the river, through winding streets, finding hidden places to take photos of the white city skyline and some amazing restaurants to eat at, my favourites were The Little Prince and Bridge Corner.

We stayed on the little (almost) island of Tripur at the amazing Hostel Crawl. It’s a very tall building with large, clean rooms, en-suite bathrooms and an amazing rooftop space perfect for watching the sunset or sunrise. They also have some sick Harry Potter wall art that’s worth checking out if you’re into that… I definitely am.

We didn’t find much to do in this city except wandering around getting lost, eating good food and spending a lot of money shopping. You can visit the City Palace, the Jagmandir Palace or take a boat tour around the lake to see it all, but not with a puppy so we missed out on this. It’s definitely a city I would recommend spending a few days in just to unwind from the chaos of the rest of Rajasthan. 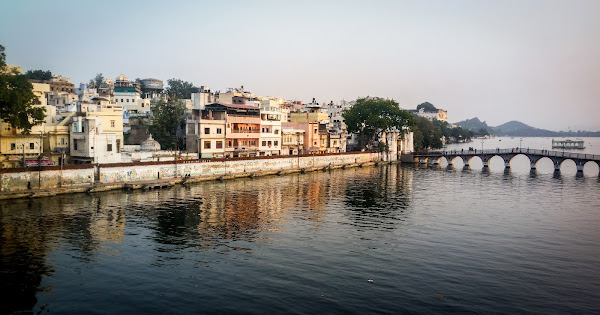 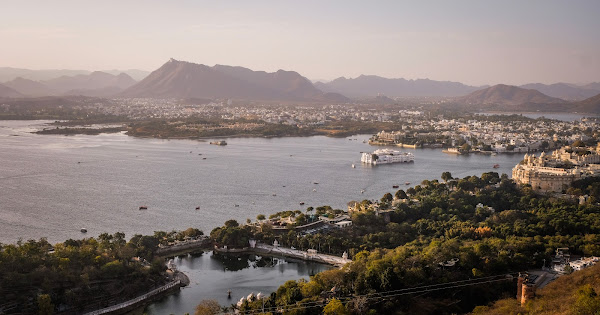 And that pretty much sums up our tour of Rajasthan! We saw temples and tombs, deserts and lakes, we rescued a puppy and I had all my valuables stolen, we missed out on some places and explored a couple places that are ‘off the beaten path’. It was a (mostly) great three weeks and is something every traveller visiting India should experience for themselves!

Do you wanna know what happened to the puppy? After we rescued her from the streets of Bundi we travelled with her through Rajasthan, up to Rishikesh, and eventually to Delhi where the angels at Kannan Animal Welfare took her in. They nursed her back to health, got her ready to travel and flew her to America where she now lives a happy life with a new family in her forever home. I can’t thank KAW enough for the help they gave us and her, and we’ve started a GoFundMe to help raise money to support their cause. Any donations could help save a little furry life, go to our GoFundMe page to learn more! 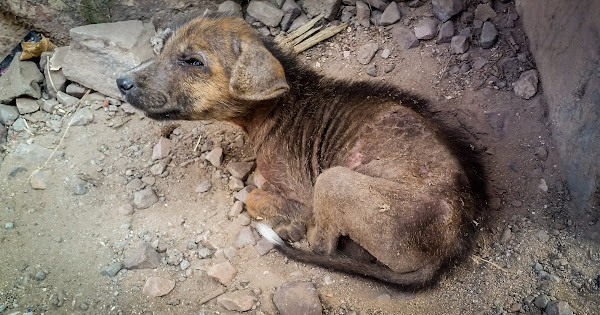 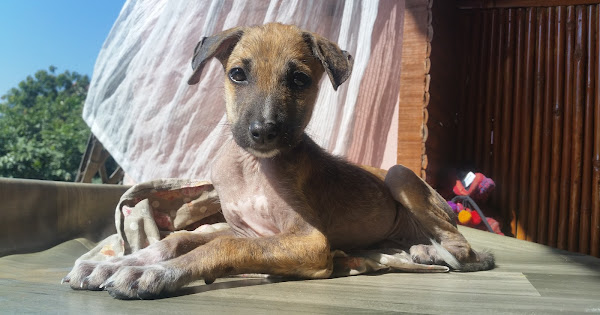 Have you been to Rajasthan? I’d love to hear about your experiences in the comments below!