I was pretty nervous about arriving in China… there are few places so utterly different from most countries I’ve visited! The language, the culture, the food, everything about it would be a brand new challenge to me. But I love a good challenge. Beijing, the chaotic capital city, was my first stop in China and the final stop on my Trans Mongolian adventure!

I pre-booked a few nights at the Sunrise Youth Hostel in Beihai and when I arrived from Ulaanbaatar to Beijing Railway Station it was easy enough to find an ATM, get on the (very clean and efficient) metro and make my way there without getting lost. I spent my first day in bed, relaxing and trying to plan the next month of my trip!

When I was finally brave enough to venture out I immediately realised I had nothing to worry about. I spent three days exploring ancient temples and palaces, relaxing in a few of the many parks, and getting lost in the winding streets of hutongs. Here are a few of the highlights! 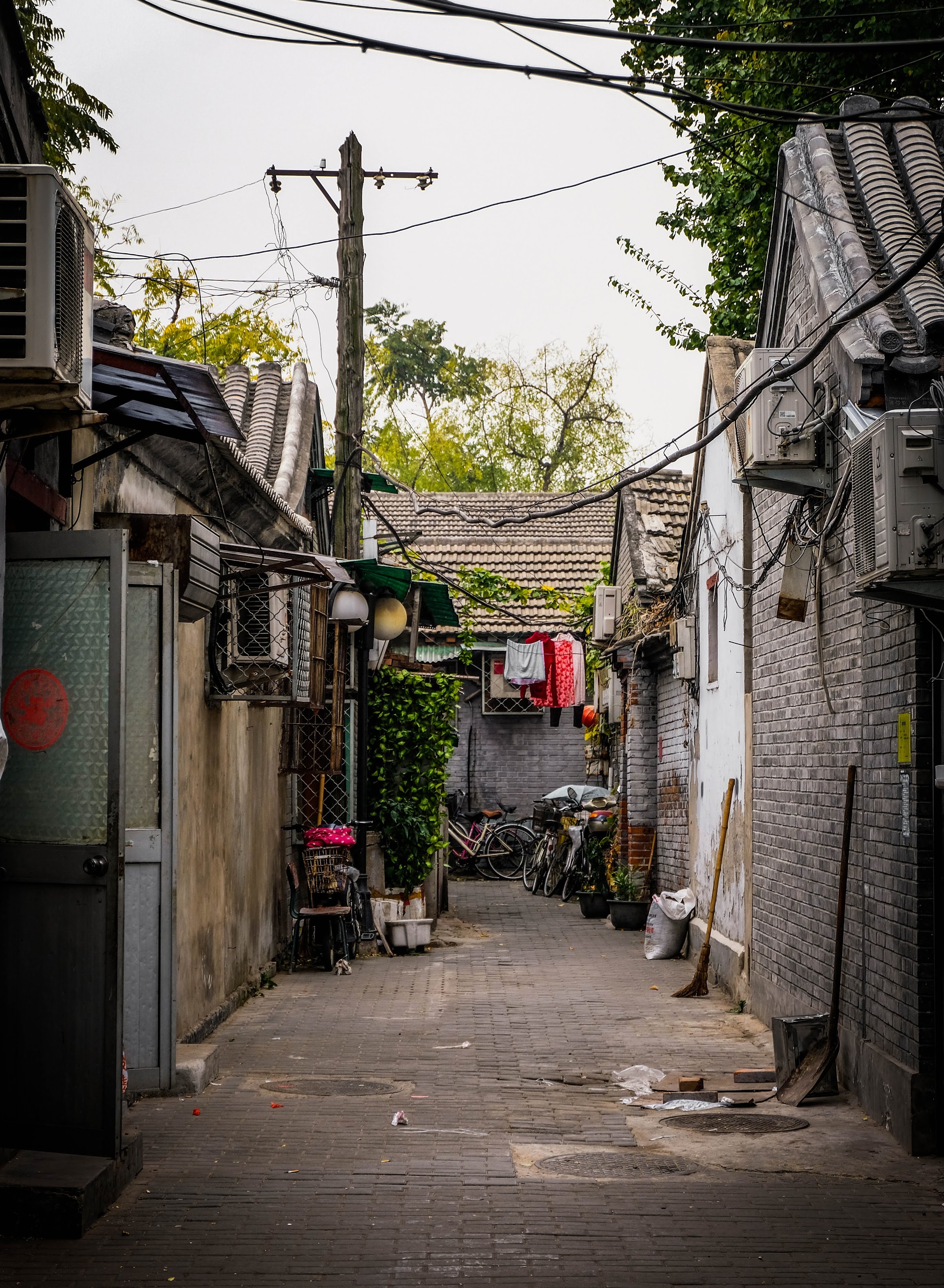 Seeing the vast “Gate of Heavenly Peace” square today, you wouldn’t think it was home to a brutal massacre where thousands of protesters were killed by Chinese troops in 1989. Now it’s a busy but peaceful place where you can get a view of the Zhengyangmen gates, Chairman Mao’s Memorial Hall, the Monument to the People’s Heroes, the Great Hall of the People, the National Museum of China and the entrance of the Forbidden City.

Most of it is fenced off and it’s confusing trying to find your way in, but as it’s one of the few free things to do in China it’s worth a visit. The closest subway stations are Tian’anmen East on Line 1 and Qianmen on Line 2. 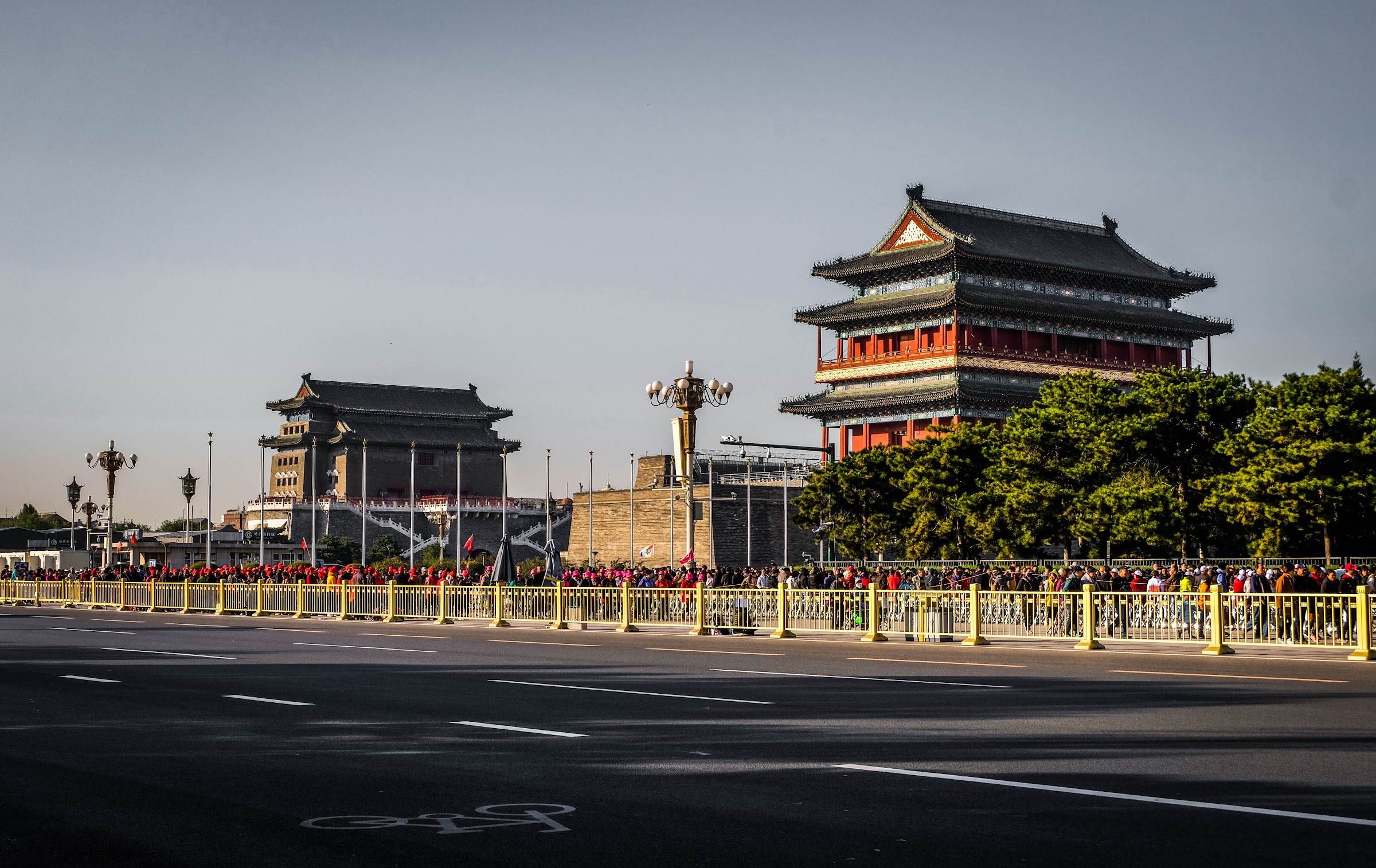 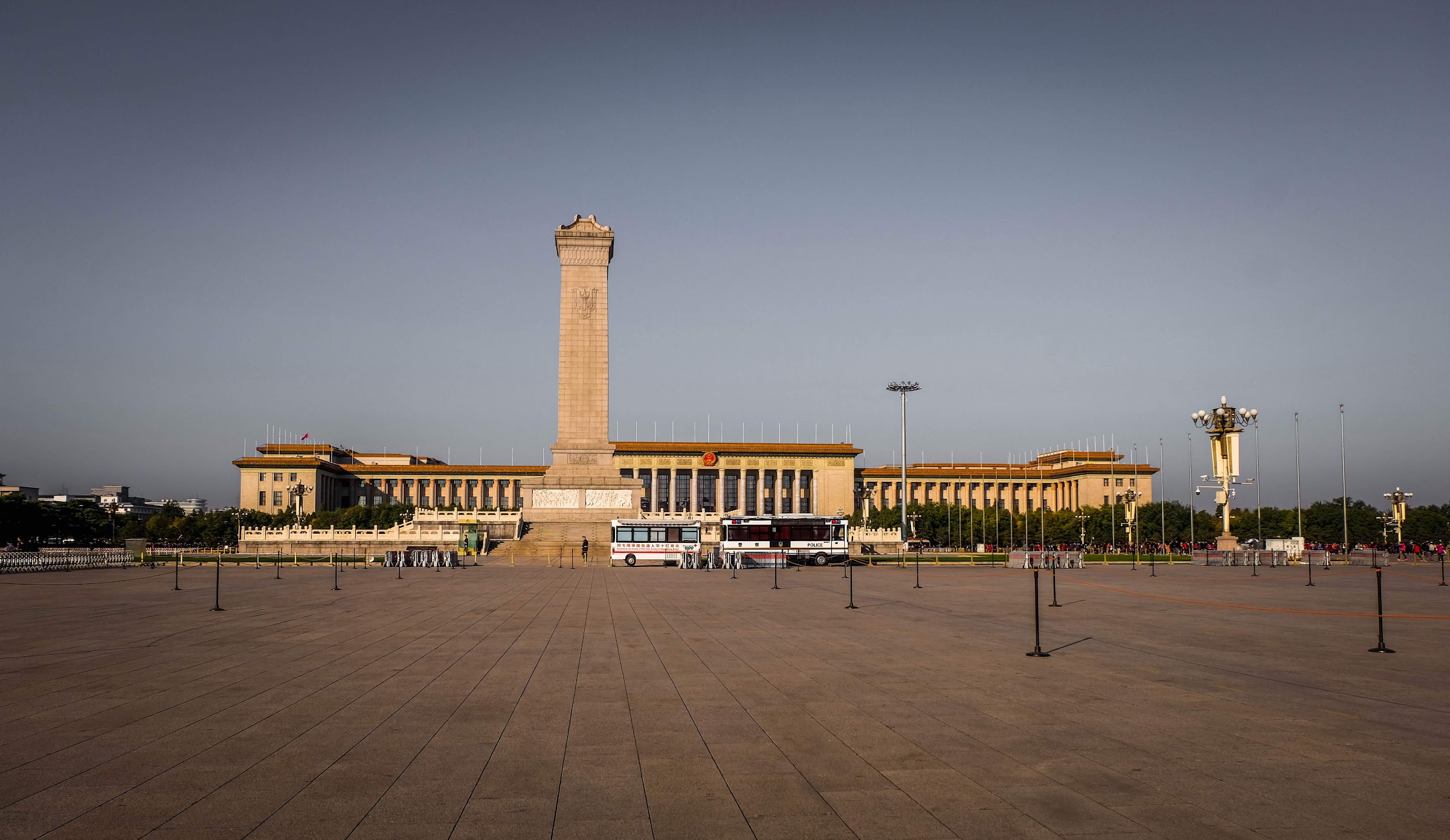 Officially called The Palace Museum, this collection of over 900 buildings is the largest palace complex in the world. You can spend anywhere from a few hours to a couple of days exploring solo, with an audio guide (¥40, $5.80) or with a real guide (from ¥200, $29). You can walk part of the perimeter wall which gives you great views, and you can also enter a number of different galleries and museums spread throughout the complex.

It’s incredibly busy all the time, but go when it opens at 8:30 and it’ll be slightly less chaotic. Gold star if you manage to take some photos without hordes of people! I found it to be quite underwhelming after an hour or two, but tickets only cost ¥60 ($8.70) so it’s well worth a visit. The closest subway station is Tian’anmen East on Line 1. 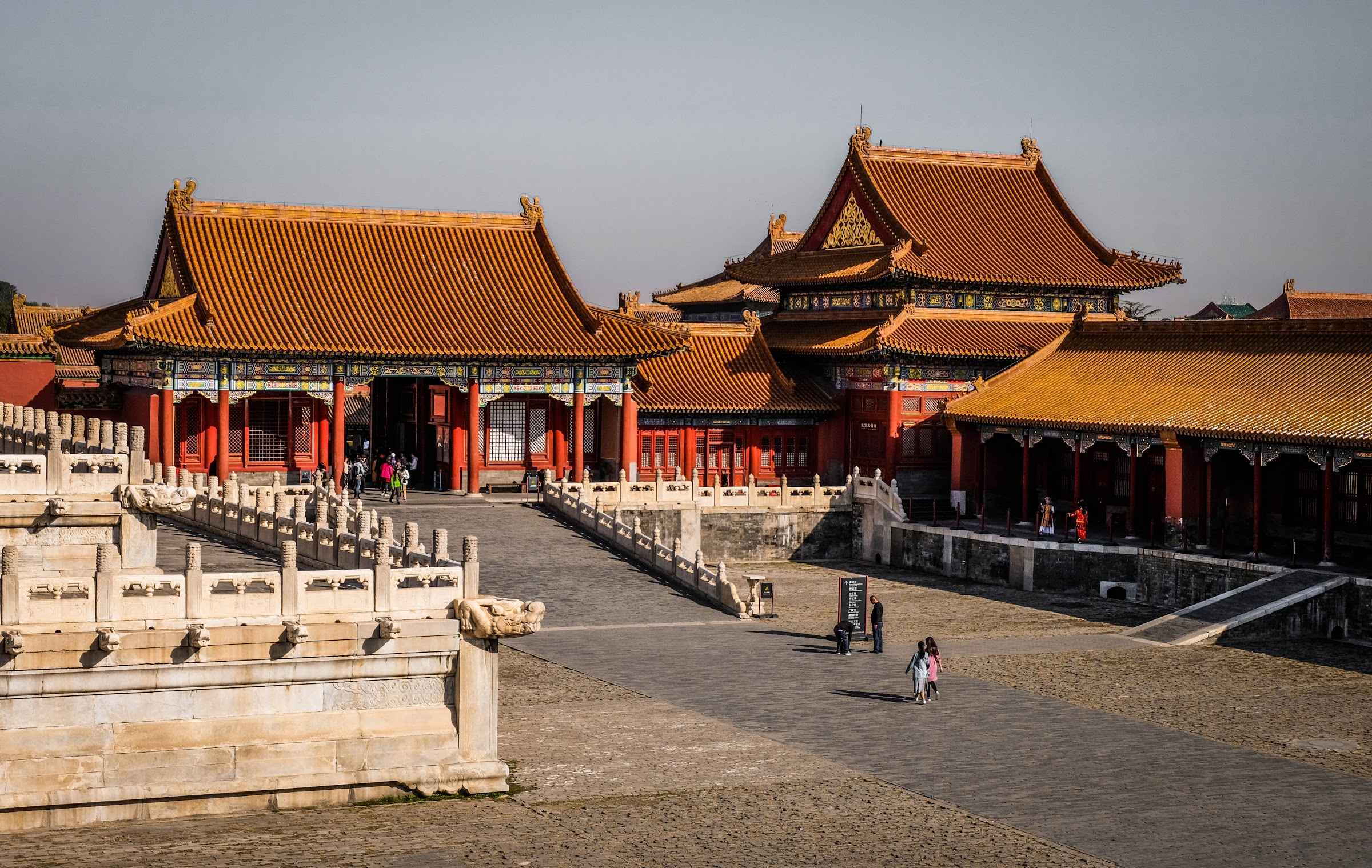 Whether you visit the Forbidden City or not, you really should take the time to go to Jingshan Park. Entrance costs only ¥2 (30¢) and it’s an easy climb to the highest pagoda where you’ll be rewarded with a wonderful 360° view of the city around you, including the many red-tiled roofs of the Palace Museum to the south. Try and go on a clear day, otherwise you won’t see much! There’s no nearby subway station but it’s within walking distance of the Palace Museum exit (north gate) and Beihai Park. 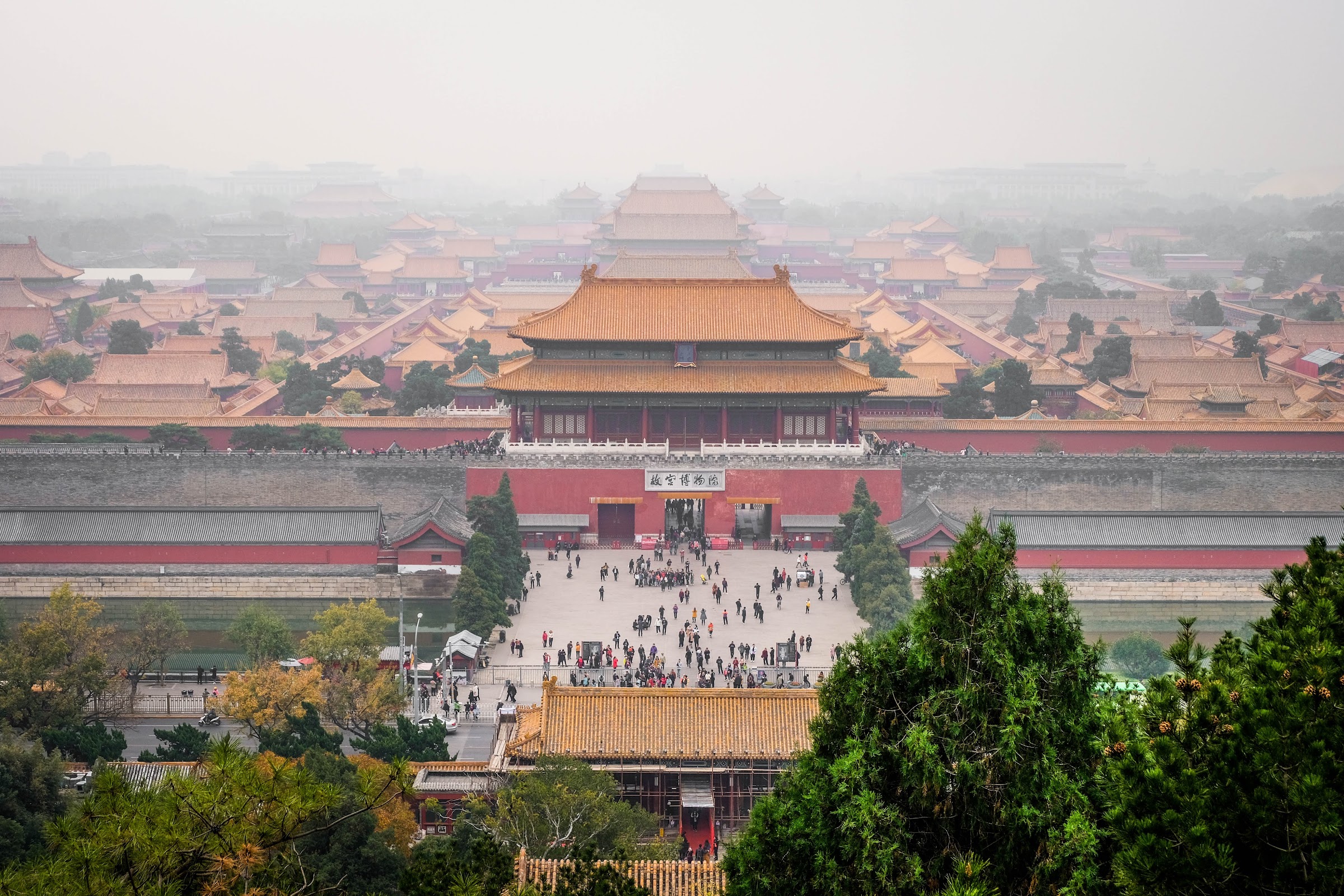 This 170-acre public park and former Imperial garden is a wonderful place to escape the chaos of the city. You can spend an hour walking around the lake, visiting the Nine Dragon Wall and numerous temples, before crossing the bridge to Jade Flower Island and climbing the stairs to the 40m high White Pagoda. Entrance is only ¥10 ($1.45) plus ¥20 ($3) to enter the pagoda (not essential) so it’s a cheap way to kill some time. The closest subway station is Beihai North on Line 6. 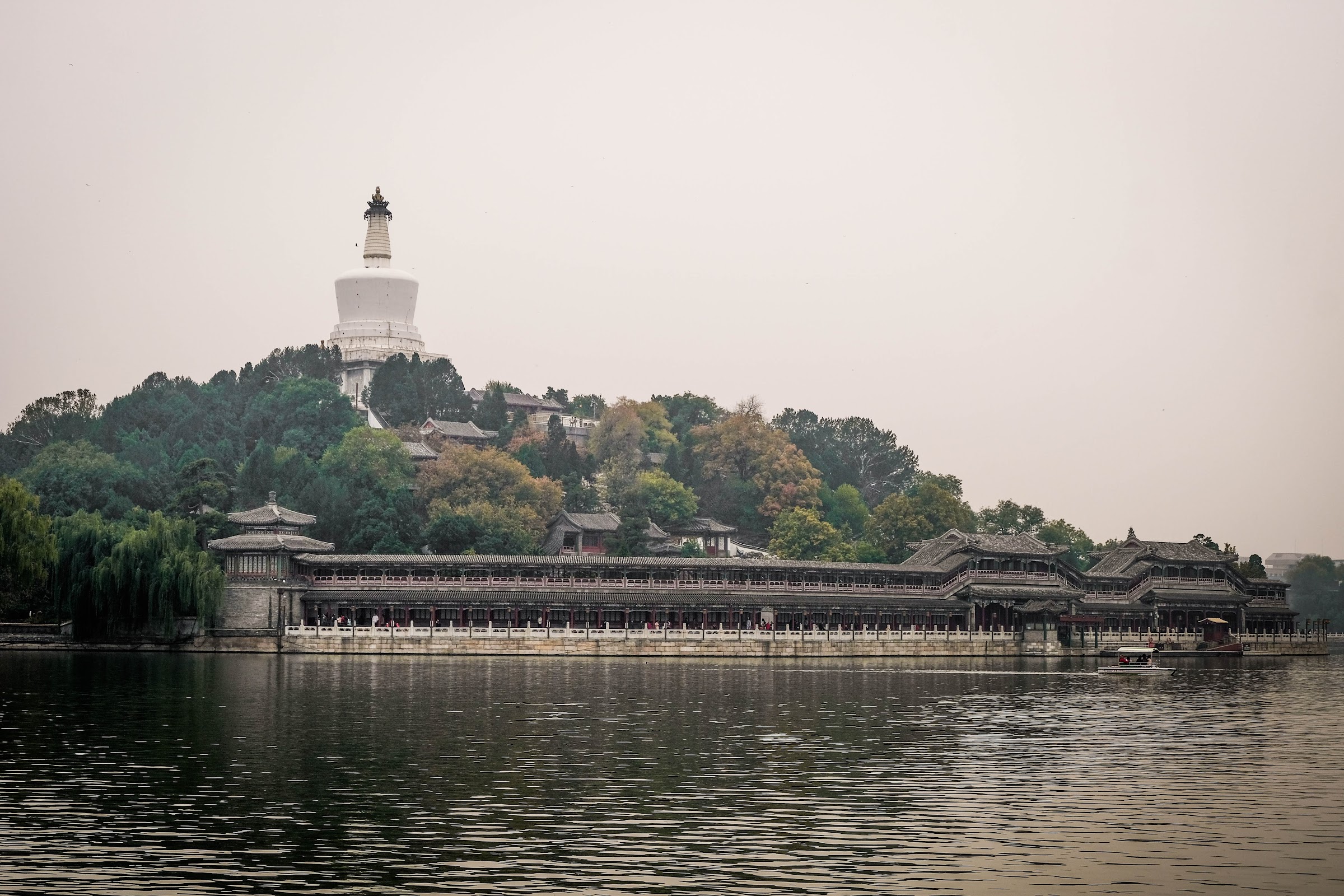 This massive 734-acre park is a perfect example of methodical Confucian design, with nature’s imperfections removed and replaced with man-made straight lines and symmetry. The three main highlights to see are the intricate Hall for Prayer of Good Harvest, the smaller Imperial Vault of Heaven and the Round Altar. Entry to the park costs ¥15 ($2.20) but to actually visit the attractions you’ll need a through ticket that costs ¥35 ($5). The closest subway station is Tiantandongmen on Line 5. 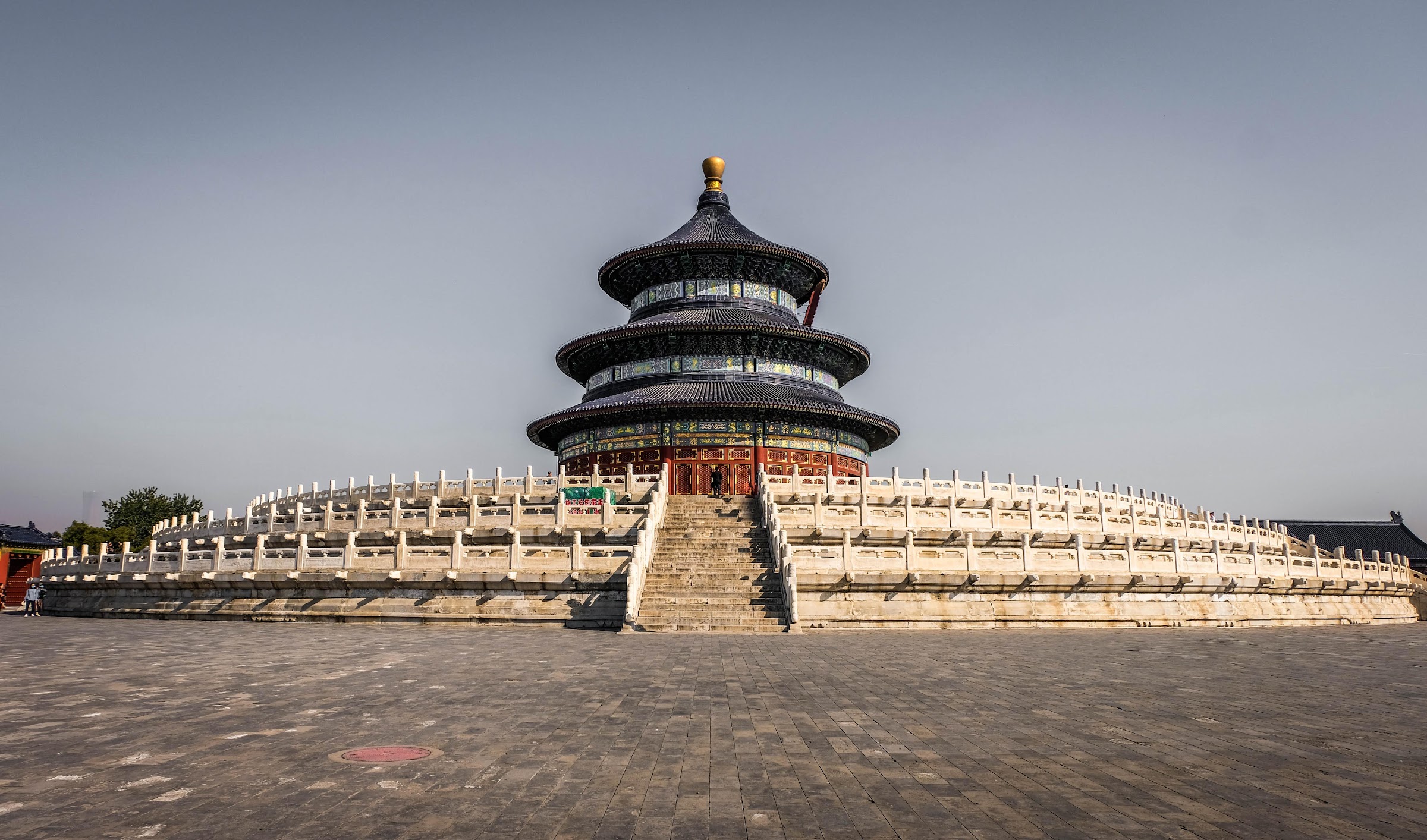 Originally built as the residence of a prince, it was eventually turned into a lamasery (a monastery of Tibetan monks) and is now considered the largest of its kind in China, and the most renowned Tibetan Buddhist temple outside of Tibet. It’s easily one of the best temples to visit in Beijing and tickets only cost ¥25 ($3.60). It’s an active place of worship so be respectful as you explore the many halls and courtyards! The closest subway station is Yonghegong Lama Temple on Line 2 or 5. 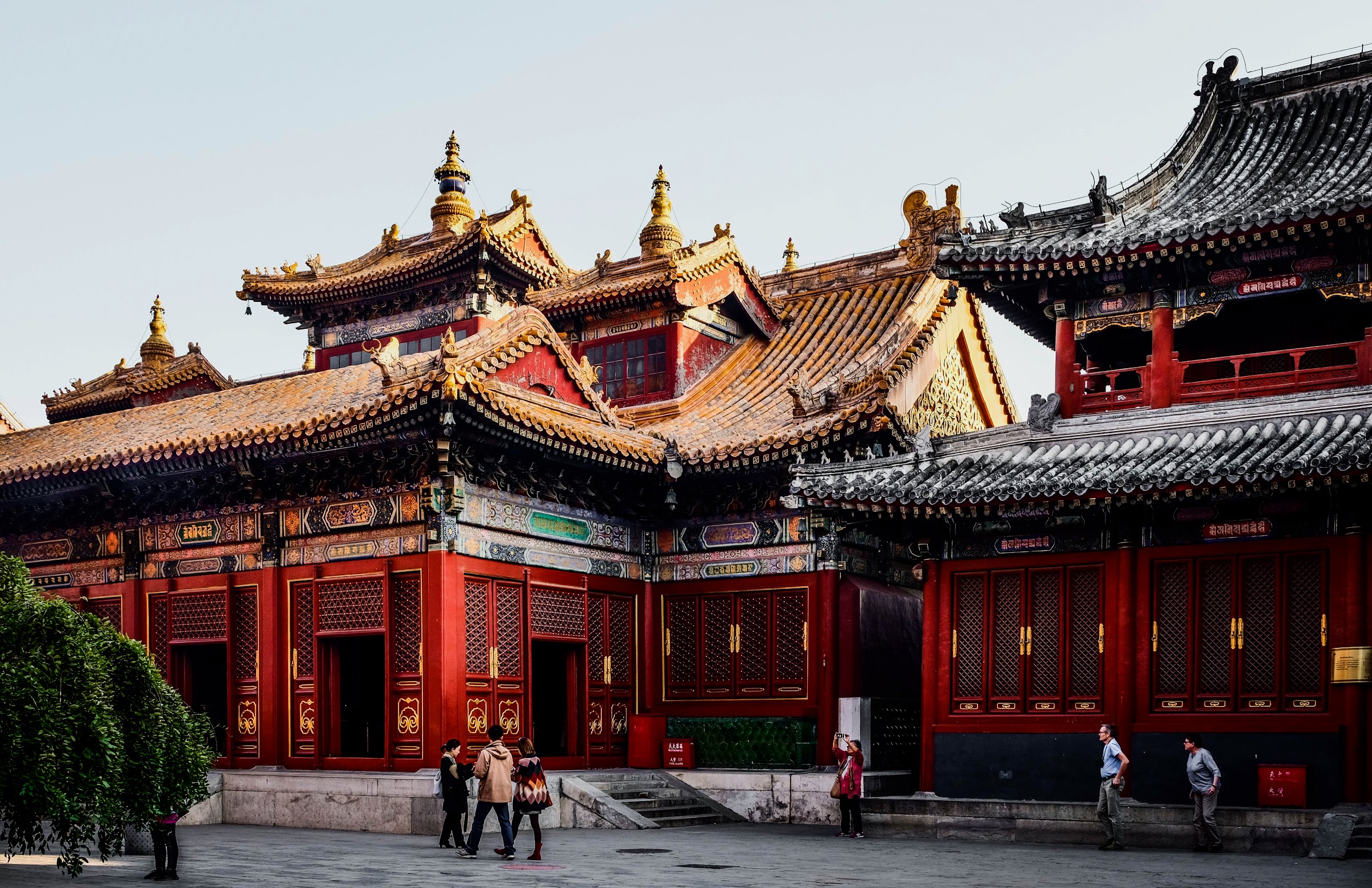 In my opinion, this was one of the best places I visited in Beijing and shouldn’t be missed! Give it as much time as you can because there is plenty to see, it’s like stepping into a traditional Chinese painting.

As you first enter from the south you cross a bridge above the scenic shopping streets of Suzhou (¥10 to enter) and you’re faced with a steep climb up the stairs and towers of Longevity Hill. Once you reach the top you’ll be rewarded with amazing views of the city and Kunming Lake below you, with the colourful Tower of Buddhist Incense ahead.

Make your way downhill and you’ll find the Marble Boat, the Long Corridor and plenty of shops, restaurants, and smaller temples. From here you can climb the 241 stairs to go inside the Tower of Buddhist Incense (¥10), worth it for the views alone. Entrance to the park costs ¥30 ($4.30), a through ticket costs ¥60 ($8.70) but you can pay separately at each attraction. The closest subway station is Beigongmen on Line 4. 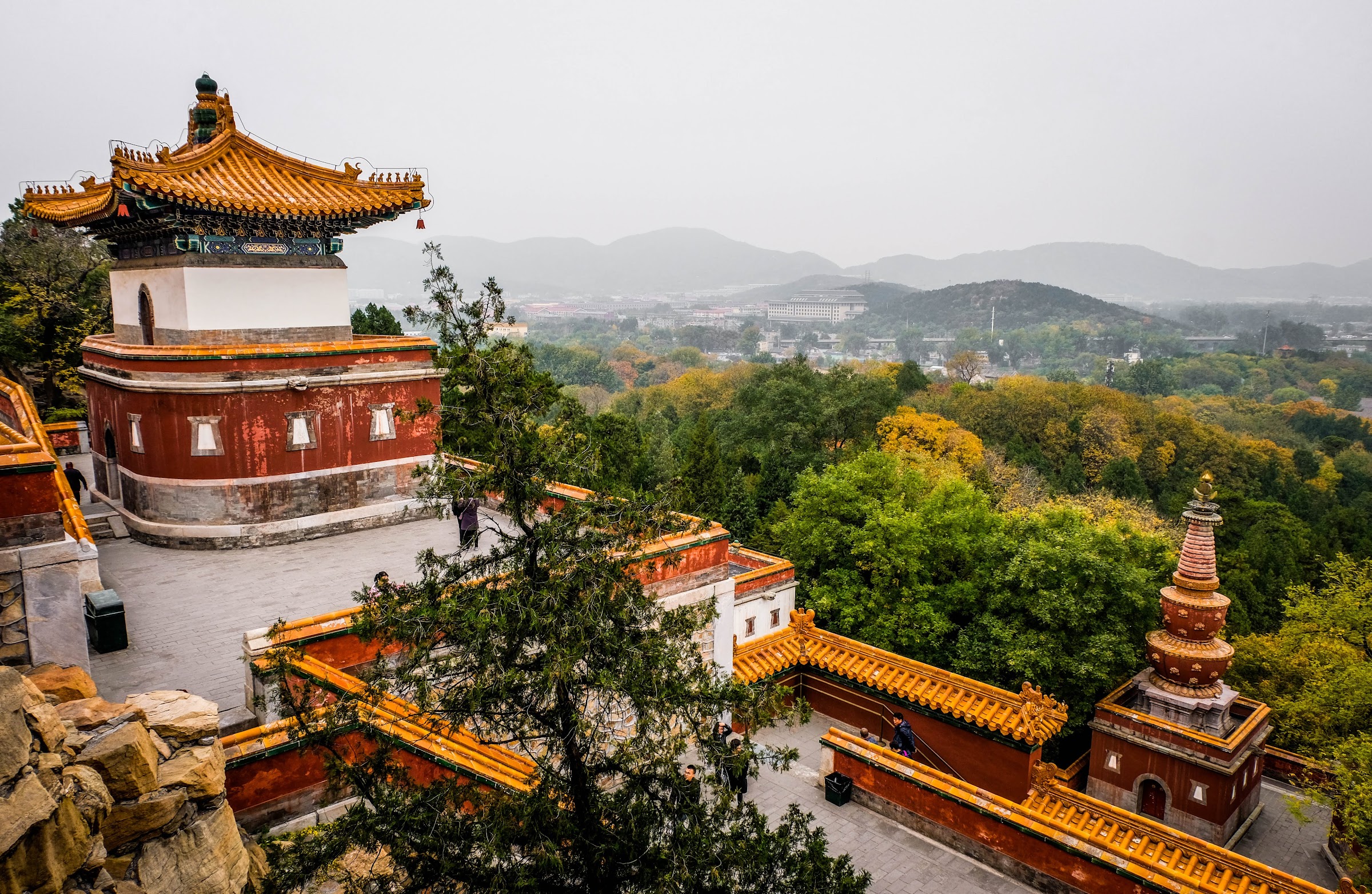 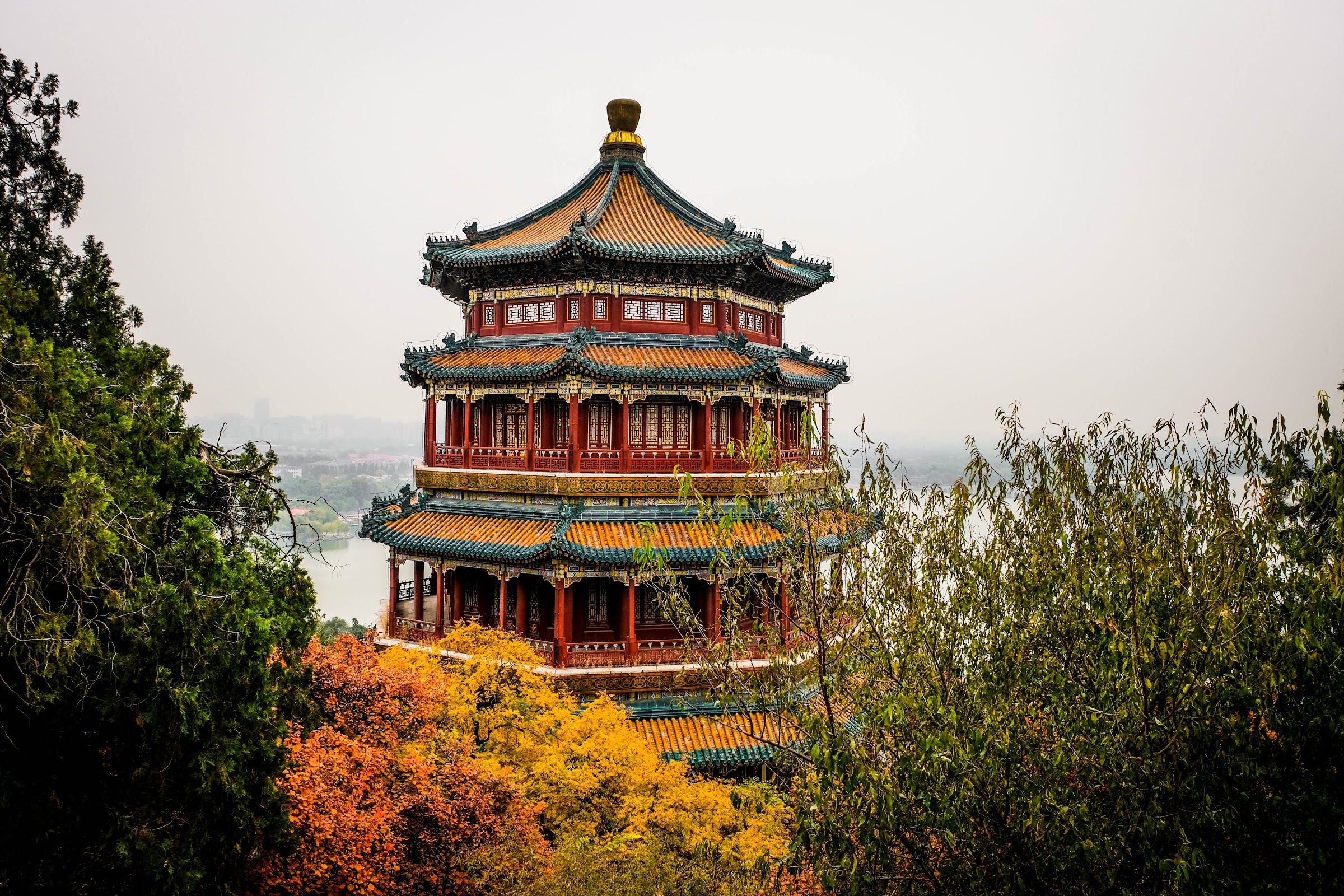 If you’re tight on time or just tired of walking around you can skip this ridiculously huge park, but if you’re still looking for a quiet place to escape the hustle and bustle of Beijing then you could easily spend a few hours here wandering around the maze of lakes and gardens. In the north of the park, you’ll find the crumbling stone ruins of the former palaces.

Entry to the park costs ¥10 ($1.45) but entry to the ruins is another ¥25 ($3.60), you can avoid this charge by walking along the outside of the fence that surrounds them, you still get some great views and you’ll probably stumble across some even older, rougher ruins hidden in the woods. The closest subway station is Yuanmingyuan Park, also on Line 4. I enjoyed Beijing way more than I expected of such a vast, busy city, especially how clean it was. It was easy to find cheap and delicious food, a highlight was the Peking Duck we had at the very fancy Siji Minfu. The most surprising thing was how easy it was to get around! Google Maps won’t work well thanks to the Great Chinese Firewall, but all you need is Maps.Me and the Metro China Subway app, which both work offline.

Leaving on the train

Once you’re ready to leave the city you can easily book train tickets through the CTrip app for a $5 booking fee, or at the station for free. They fill up very quickly so always try and book a few days in advance, otherwise you could end up with a standing ticket for 5 hours and trust me, that is not fun. Soft seats and soft sleepers are the equivalents of second class (comfortable but more expensive), and the hard seats and hard sleepers are the equivalents of a third class (much cheaper and still comfortable despite the name, perfectly acceptable for most travellers).

If you’re visiting Beijing and have any questions, or you’ve already been and have a suggestion, then feel free to leave a comment below!

One thought on “Brave the chaos of Beijing”