While the trek to Everest Base Camp is one of the most popular hikes in Nepal, it’s also one of the most expensive. If you still want a taste of that sweet mountain air but need to save a lot of money, then Annapurna Base Camp is your answer. It’s not only cheaper, but it’s also easier and probably warmer, with more diverse landscapes and much less chance of getting altitude sickness.

We spent 9 days hiking  87km from Nayaul to Jhinu Danda via Poon Hill, Machapuchre Base Camp (two for the price of one!) and the Annapurna Sanctuary, which cost around NPR 16,000 (£113), including permits, transport, accommodation, food, drinks, and the hot springs. It’s a surprisingly easy hike as long as you’re ok with climbing ten thousand stairs, and it’s ok for people of all ages with a moderate level of fitness.

Listed here are the main villages, but there also some random teahouses and restaurants throughout the trek if you want to find somewhere a little quieter. It’s usually possible to get a free bed in exchange for buying dinner and breakfast in the same place, just be polite and avoid asking in front of other guests, in case they’re paying. 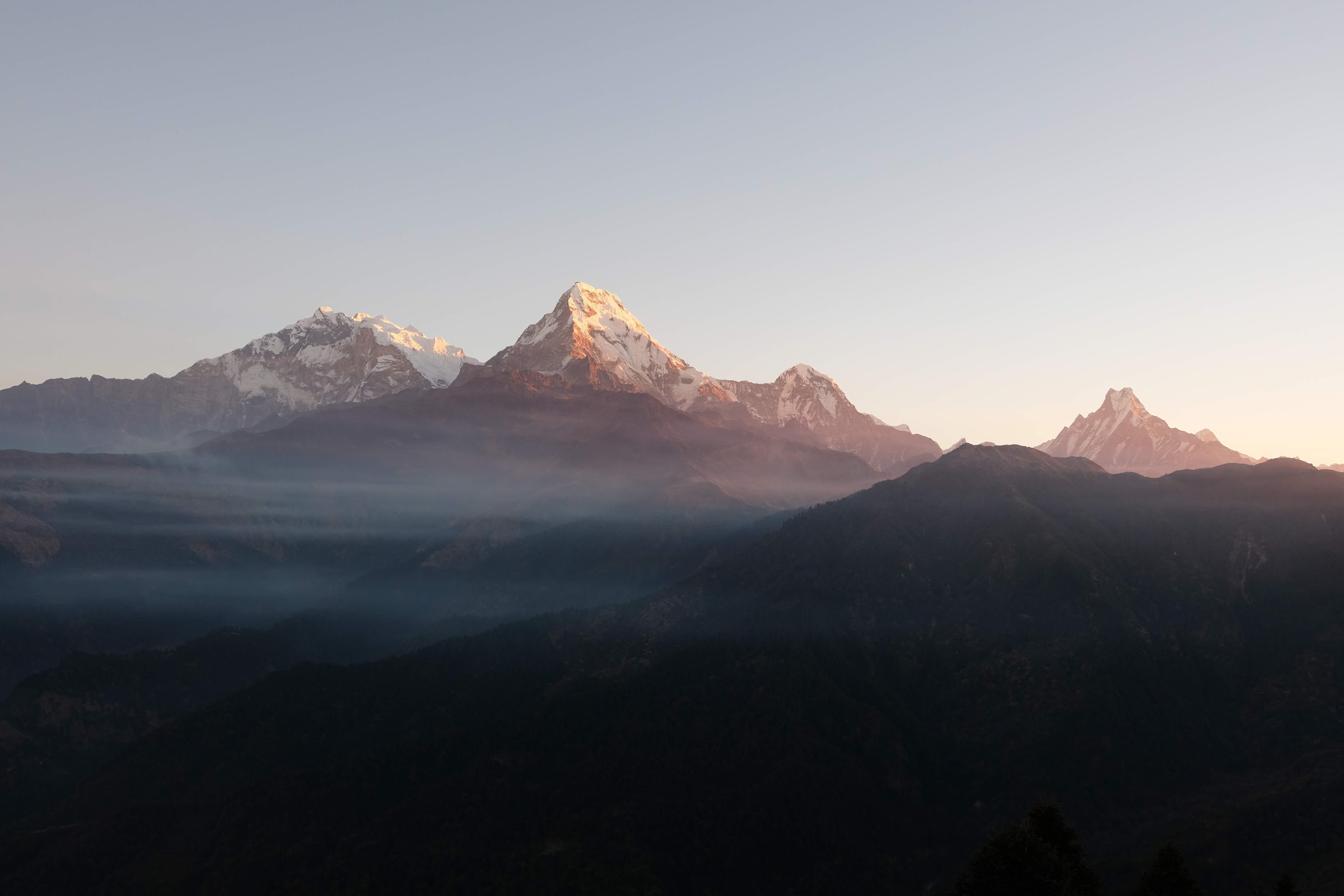 Unless you’re tackling the Annapurna Circuit first, then you’ll be starting your hike in Nayapul. To get here from Pokhara, simply grab a taxi to the Baglung Bus Park and hop on any bus heading past Nayapul, tickets should cost 200 rupees per person, and the rickety old bus takes three bone-shattering hours over those terrible Nepalese roads. You can pick up any essentials you might still need here, but I wouldn’t recommend spending the night. 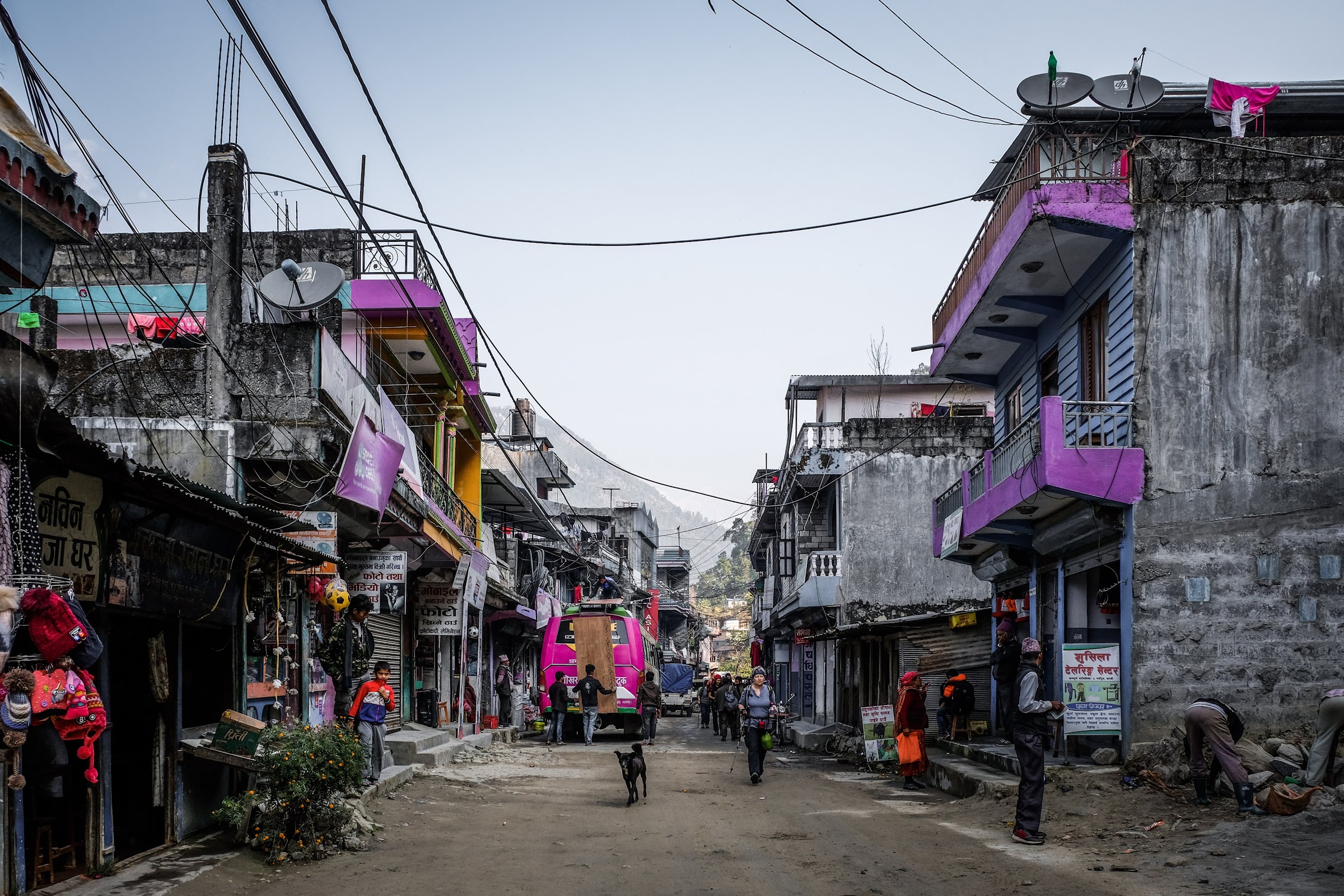 A lot of tour guides will recommend staying in the slightly lower Tikhe Dhunga, but try to push on to Ulleri. It’s a hellish climb up a seemingly neverending flight of stairs, but it makes the next morning that much easier. We stayed at the aptly named Nice View Guesthouse, rooms and charging were free. There are two parts to this village, upper and lower. The only difference is the view, lower Ghorepani looks out over the valley, upper Ghorepani looks out over the mountains. We stayed at See You Lodge, rooms were 100 rupees with shower and WiFi, or free without. It had the best view, but unfortunately, we were there at the same time as a noisy group of school kids so we got literally no sleep. 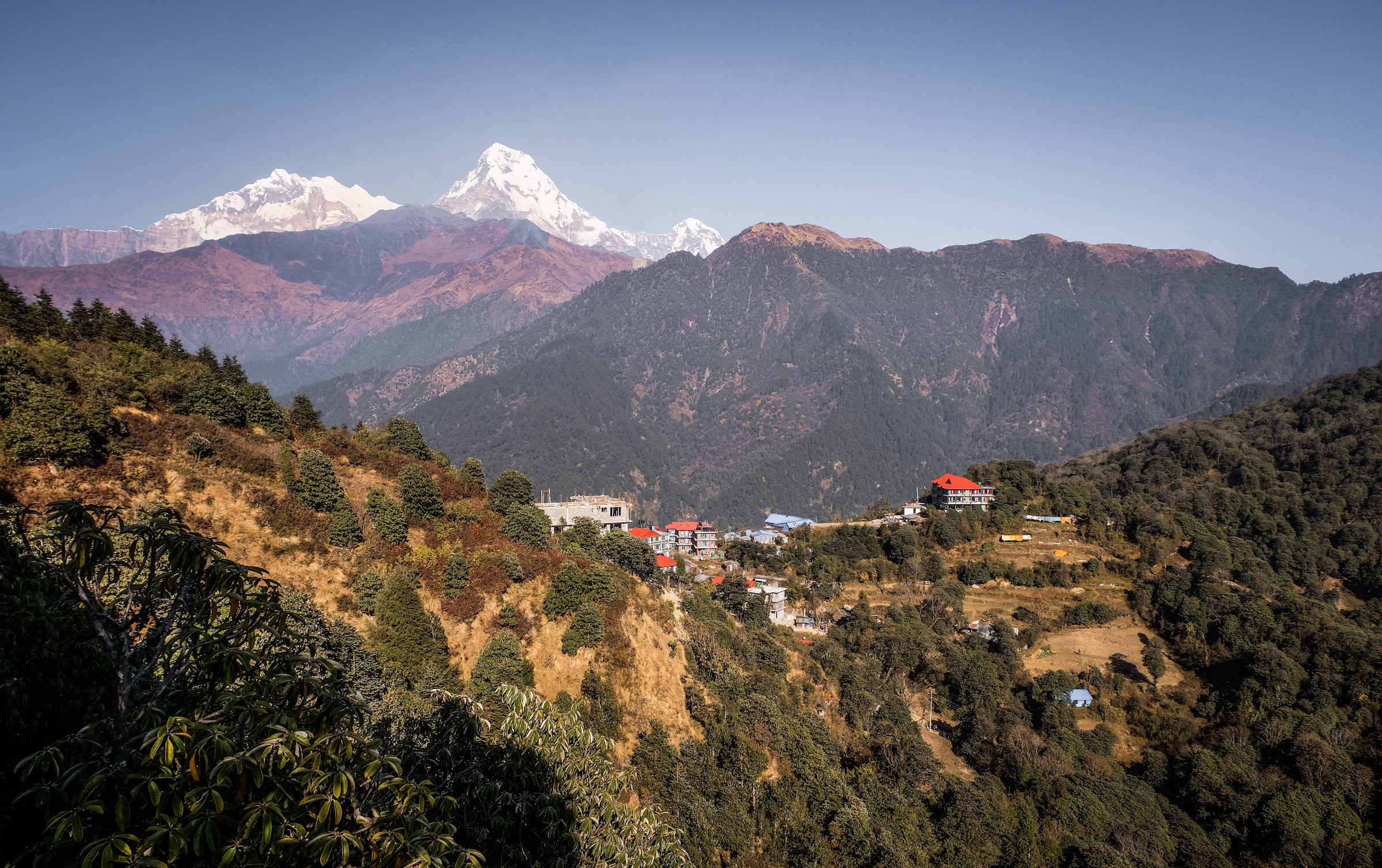 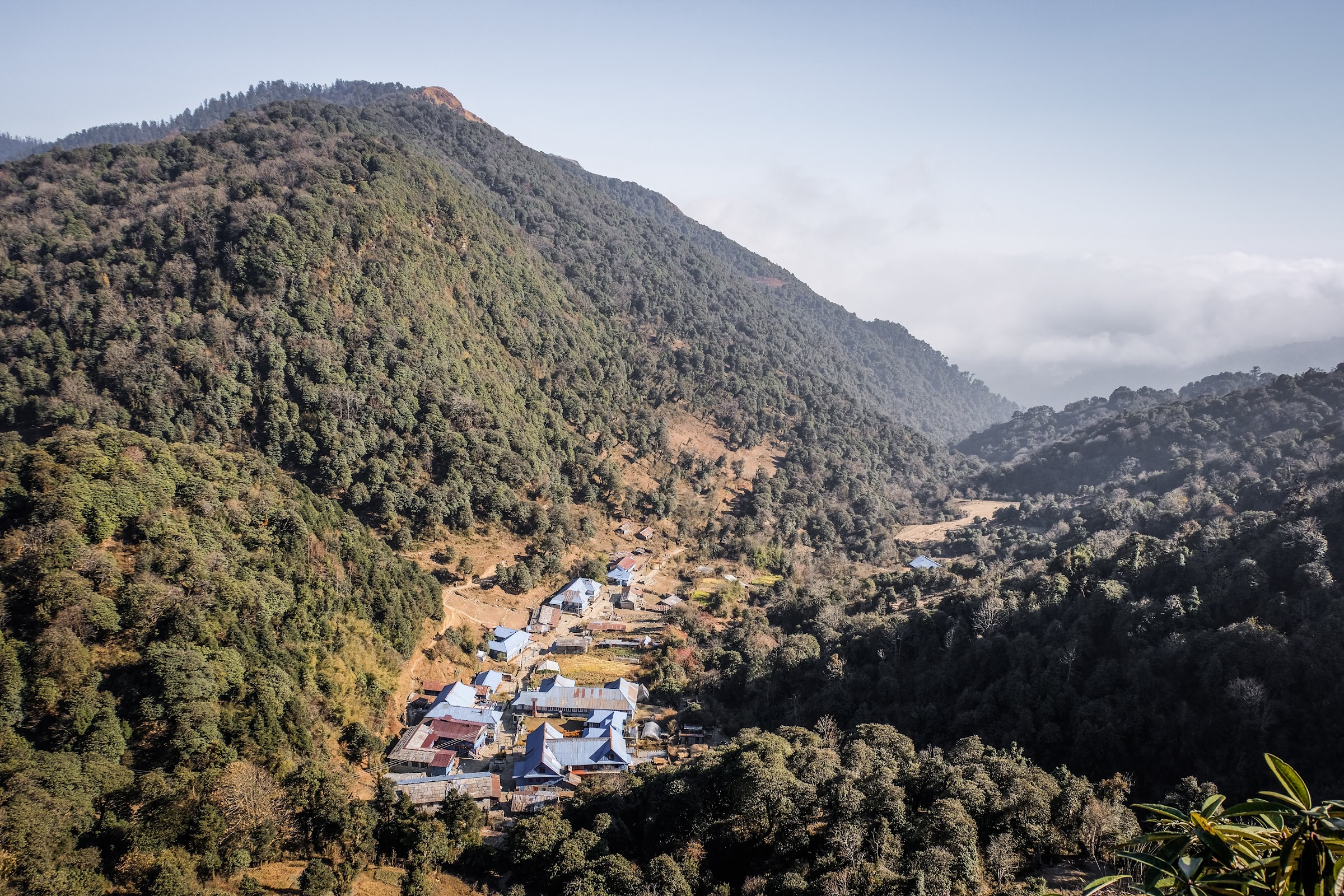 The reason you stay in Ghorepani is to visit Poon Hill for sunrise. It’s a tough climb to do at 5am, but it’s seriously worth every step. One of the best views of the trip! If you’re just visiting Poon Hill, then you can either head back the way you came to Nayapul or follow the ABC trek as far as Tadapani before heading down via Gandruk. The crowds will disperse as soon as the sun has risen, so stay a little longer to enjoy the peace and quiet! 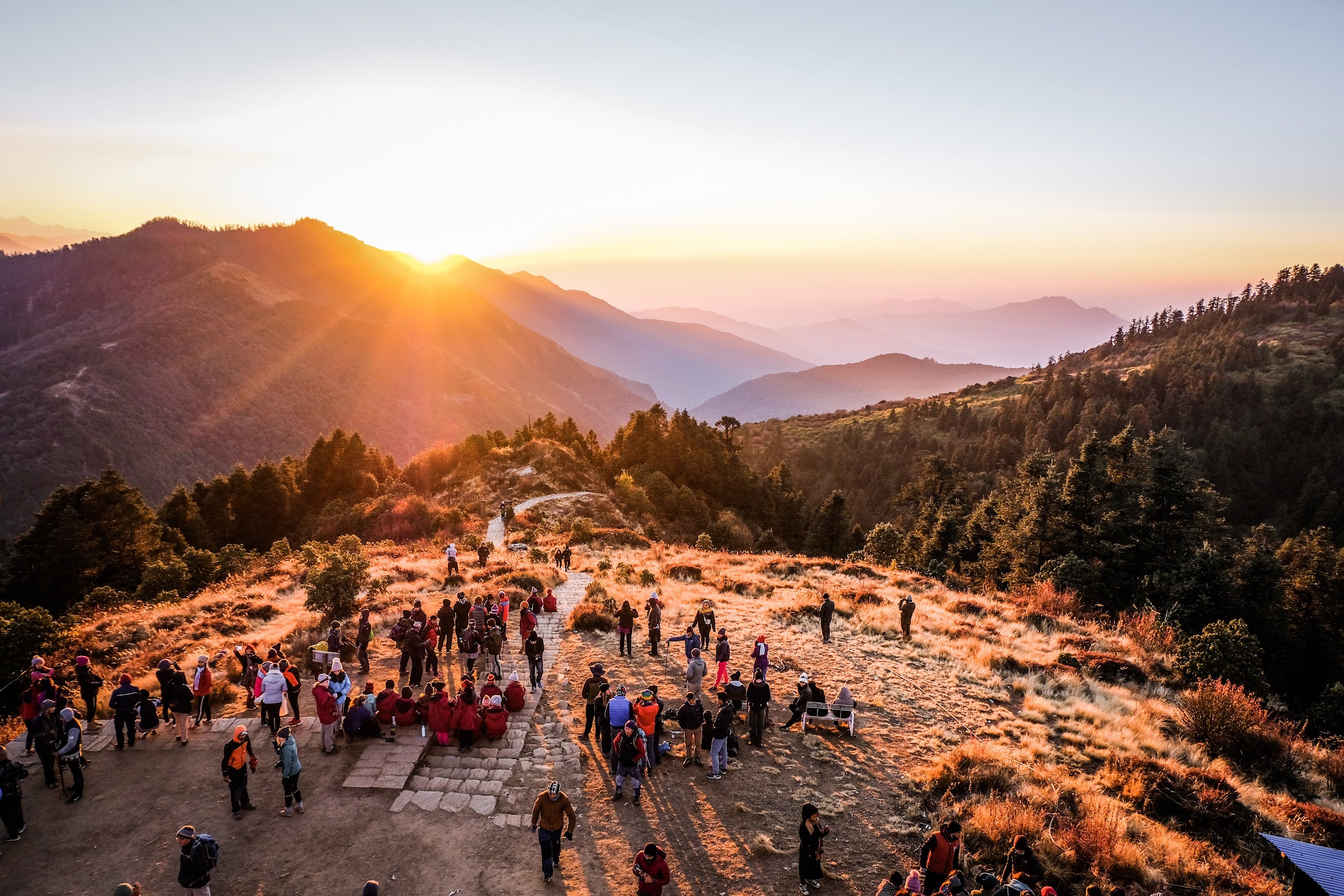 After climbing Poon Hill for sunrise, it’s a long walk to Tadapani (especially the last, brutal climb) but it’s worth staying here for the views alone. We stayed at Grand View Lodge and got rooms, charging, WiFi and hot showers for free. Plus it was here that we finally discovered the magic of the dal bhat refill! 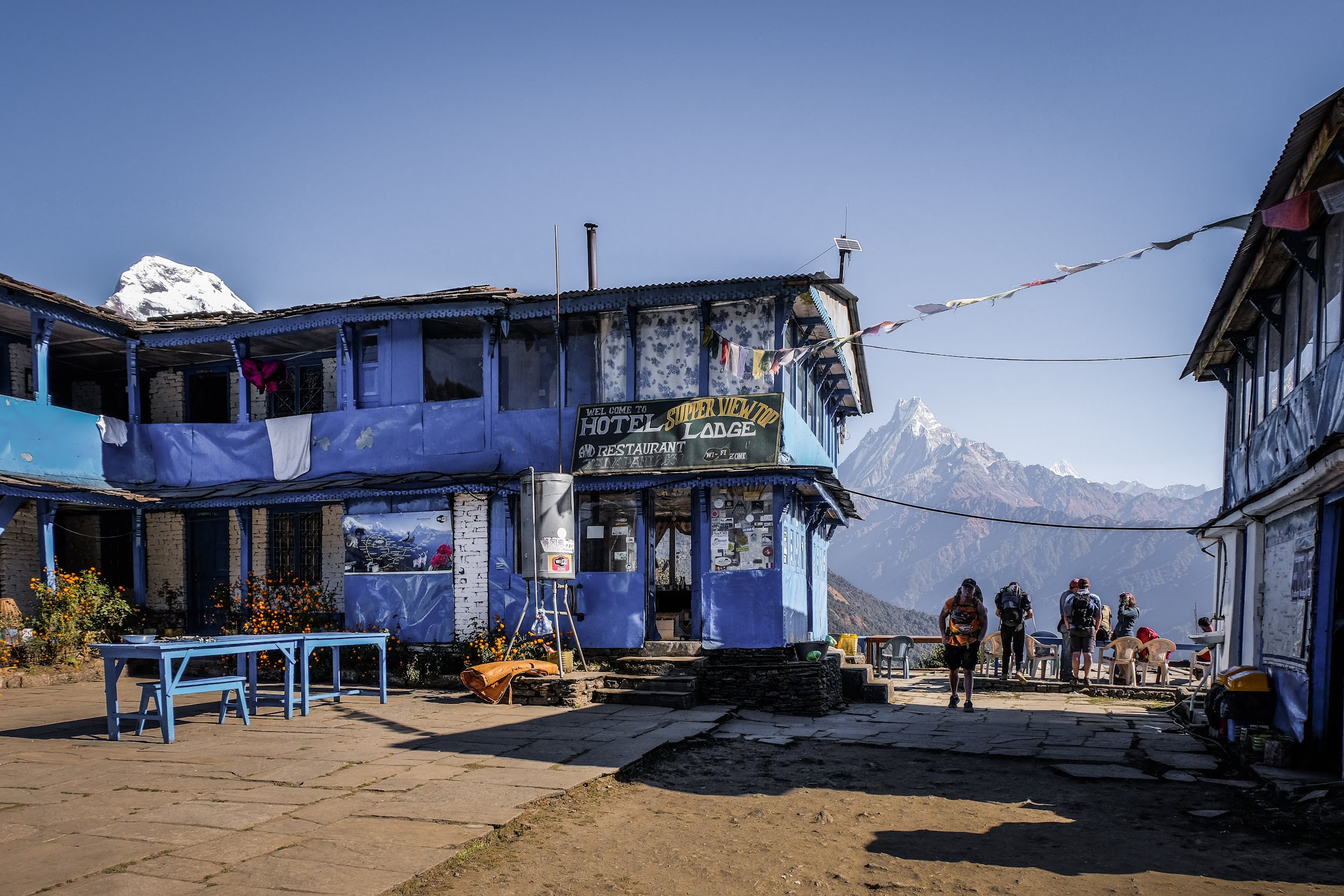 This village has an incredible view, but you’ll come to resent it when you have to descend all those stairs, and then climb them again at the end of the hike. We stayed at Lucky Guesthouse for free, and they had the best dal bhat and masala chai we had on the hike. There’s a bakery across the street where you can get free WiFi if you buy something, but don’t expect too much from the pastries. This hillside village is a great alternative to Chhomrong, and it saves having to do that huge descent and ascent first thing in the morning, but it’s a long day from Tadapani. You can easily climb to Himalaya from here, and from there either to Machapuchre Base Camp, or even ABC. 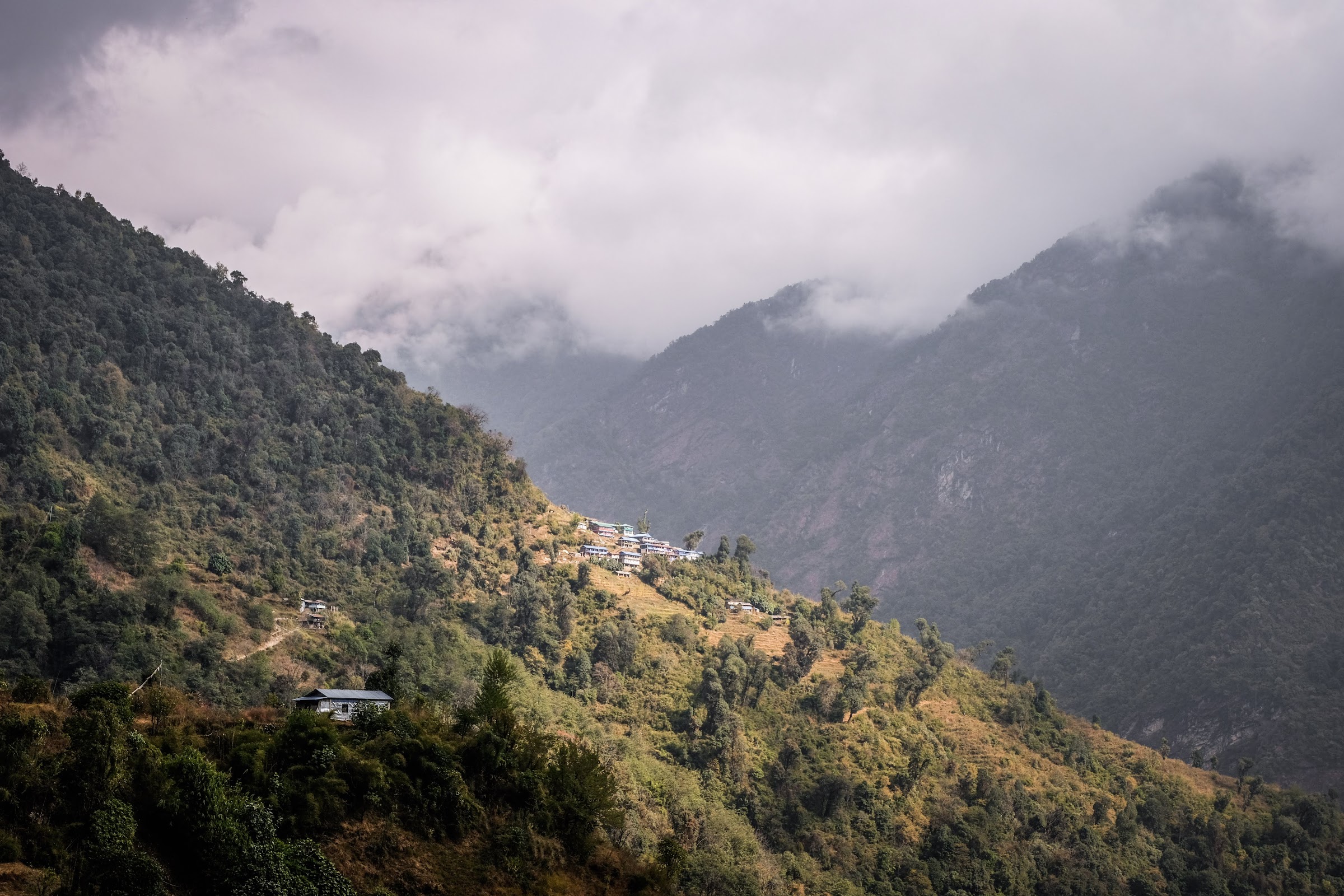 If you spend the night in Chhomrong and want to give your body a better chance of acclimatising, then spend the night here before climbing to Himalaya. It’s a small place without much of a view, but avoiding AMS is more important.

After spending the night in Chhomrong, we decided to stay here for the night, although we could have (should have?) pushed on to Himalaya. It cost us 100 rupees per person at Dovan Guest House with free charging. We also stayed here on the way down, although I wish we had stayed somewhere different! 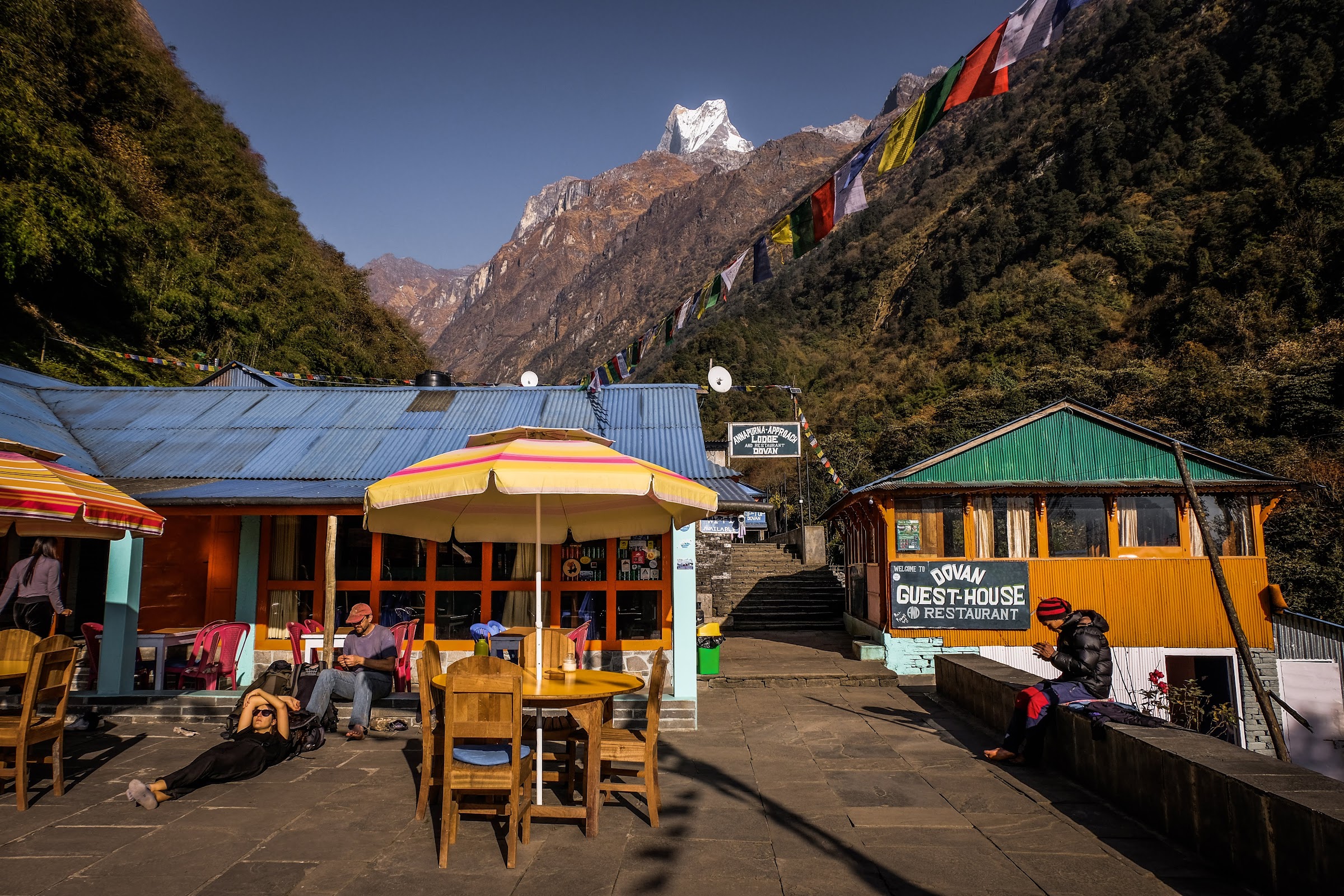 We didn’t stay here, but we easily could have after spending the night in Chhomrong. It’s also a great option if you stay in Sinuwa or even Bamboo, to help your body acclimatise. It’s also a better option for climbing to MBC, although you’re still way over the limit of 500m ascent per day.

The best choice to help you avoid AMS is to sleep here after spending the night in Dovan, you’re still over the limit of 500m ascent a day, but it’s better than what we did, which was to ascend 1200m in a few hours to MBC. We didn’t have any symptoms of AMS, but others did. Listen to your body, and don’t push yourself! We chose to sleep here instead of ABC because it was cheaper, lower, slightly warmer and meant we just had to carry a day pack as we made the final ascent the next morning. We stayed at Machhapuchhre Lodge, with incredible views of Machhapuchhre from the dining room. It cost 150 rupees per person with free charging. If you have the time, I’d recommend spending a night here so you can really enjoy being surrounded by these giant peaks. If not, it’s a good (but expensive) place to have breakfast before hiking back down. Ask around to make sure they’re actually open… They can close when the snow gets too deep.

*update May 2019*
The lodges of ABC have been destroyed in an avalanche! The area is still open, but for now, it’s not possible to sleep there.  Check for updates from other teahouses on the trek. Most people choose to hike to ABC for sunrise, but if you do it’s cold and almost everything is in shadow, which means you’ll get some badly exposed photos. Instead, leave MBC at sunrise and by the time you make it up there the crowds have left and everything will be in the sun. Spend some time sitting at the edge opposite Annapurna I where you can listen to the massive glacier cracking as it warms. 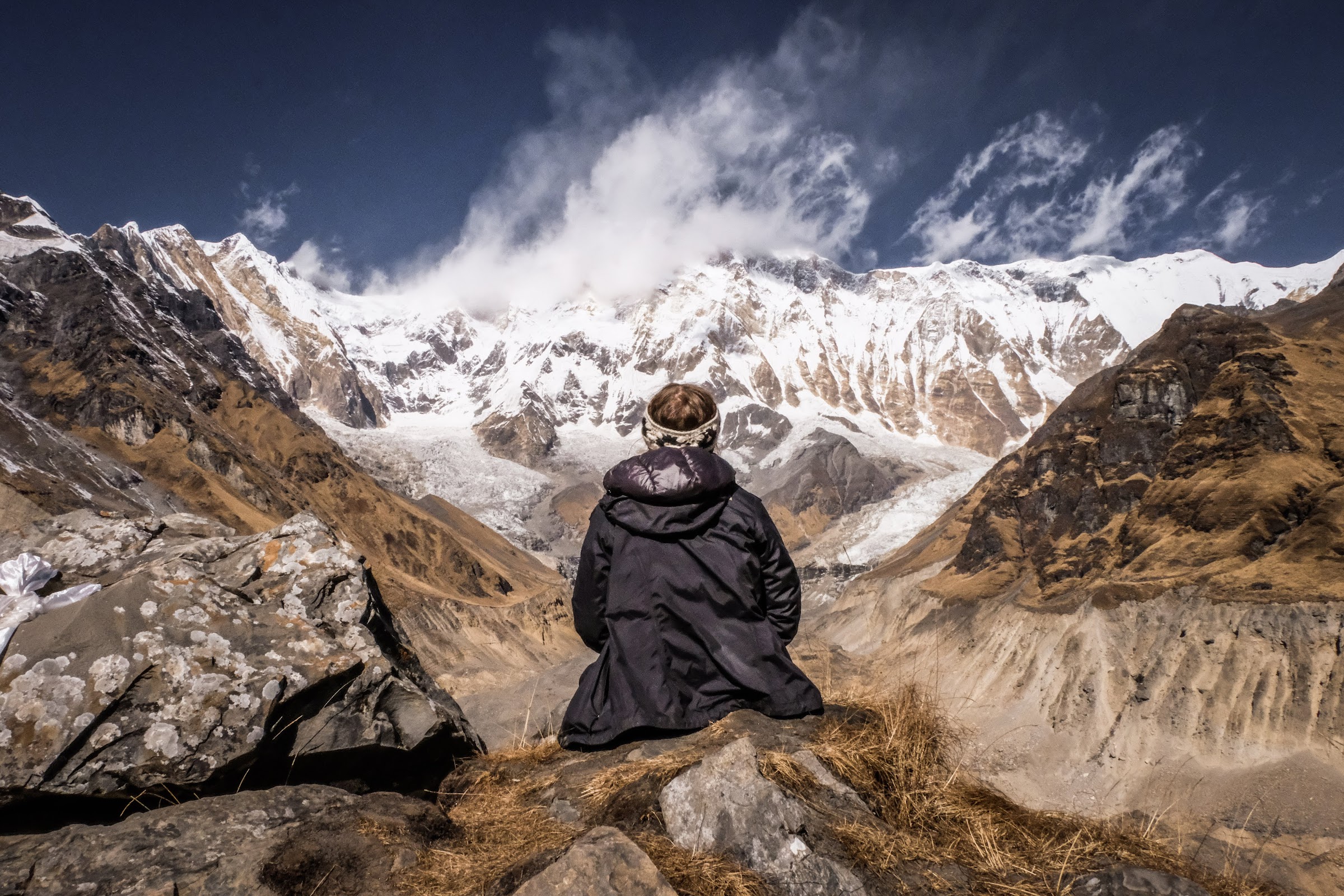 As you descend from ABC, you can just walk down as far as you feel like before finding a place to stay. It’s always nice to spend the night somewhere new unless you found a place you really liked on the way up. It’s the same route down until Chhomrong, we stayed in Dovan and Chhomrong again, but I wish we had pushed on to Sinuwa and spent the next night in Jhindu Danda.

After climbing the hellish stairs up through Chhomrong, I’d recommend walking the next 2km downhill to this hilltop village and making your way down to the Jhinu Hot Springs. There is no better way to end a long hike! Two concrete pools of hot water lie by the raging Modi Khola. They cost 100 rupees, there are two pipes for a hot shower and a few changing rooms. 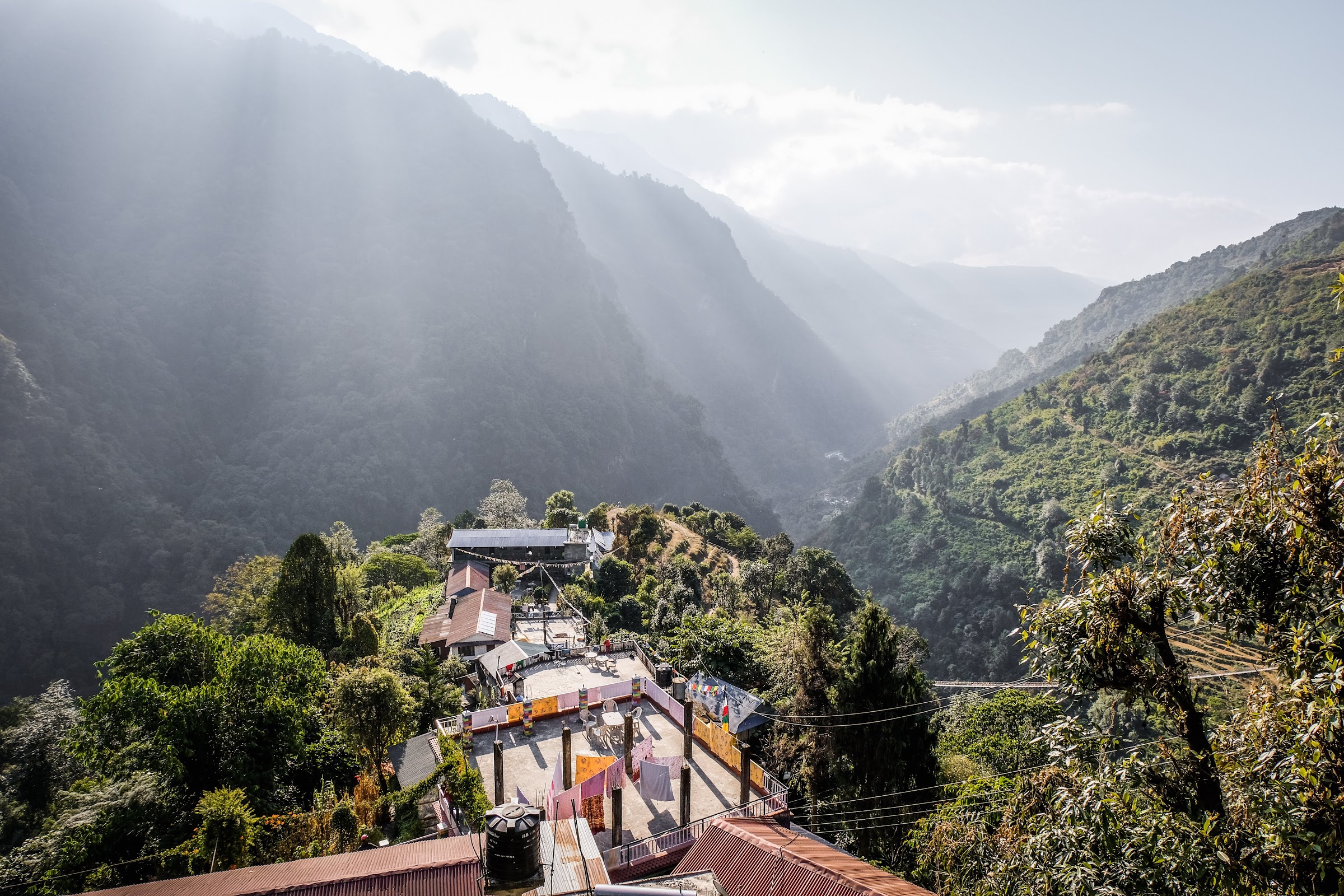 From Jhinu Danda you can either walk downhill and along the river all the way back to Nayapul, climb to the Siwai jeep counter and bus stop, or continue on to Ghandruk. All these options mean you can catch a local bus or jeep back to Pokhara.

But beware, the mountain road is an unstable scree slope that looks like it could collapse under you at any moment, throwing you to your death on the rocks hundreds of meters below, so if you’re a nervous passenger then maybe walk down… We took the bus from Siwai to Pokhara for 500 rupees, it took four hours and it was the scariest thing I’ve ever done.

Although the Annapurna Base Camp trek is at a much lower altitude than the Annapurna Circuit or Everest Base Camp, you still need to be careful above 2500m. With this route, you are ascending further than the recommended 500m per day between Dovan and MBC, but climbing Poon Hill will help.

If you don’t summit Poon Hill then think about adding an extra day and climbing from Dovan to Deurali to MBC. If you’re already acclimatised from a previous hike (no longer than three weeks before) then you can take things a little faster without worrying.

If you’re adding the ABC trek onto the end of your Annapurna Circuit trek then you don’t need to worry about acclimatization because your body will still be ok after crossing Thorung La (unless it was more than two weeks earlier), and the whole hike will seem like a piece of cake!

One thought on “Hiking the Himalayas: the Annapurna Base Camp route planner”