After just three days in Beijing I was getting pretty sick of temples and crowds, so I decided to leave the city and head to Datong to visit the amazing Yungang Grottoes! If you have the time, it’s well worth a detour to spend a couple of days here.

I arrived from Beijing on the train late at night so I booked a hostel nearby. I stayed at the Datong Green Island Youth Hostel which was great! Clean, comfy, and they have cats. What else do you need? There are also some shops and cheap restaurants around, and the bus to Yungang stops right outside. 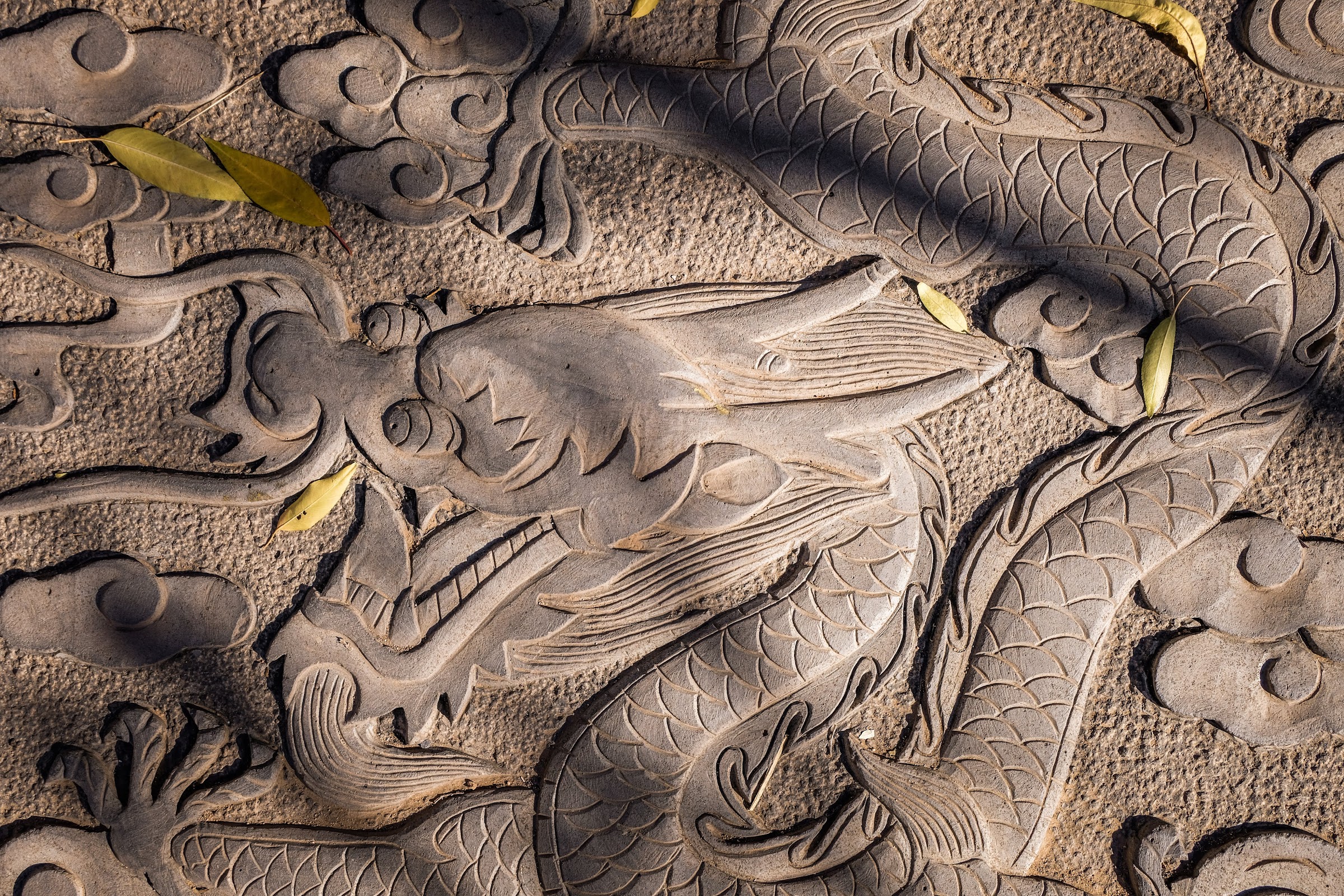 Some people will try and rip you off when you’re trying to get to Yungang… the taxi drivers will tell you there’s no bus and will give you a ‘good price’ which will cost ten times more than it should. There is a bus (there’s always a bus), the 603 will take you directly to the entrance for 3¥ (45¢) and takes around an hour. Try and get there just before it opens otherwise you’ll be battling with hundreds of Chinese tourists!

These magnificent caves are one of the best examples of Buddhist cave art in China. There are over 51,000 sculptures across 252 caves. Work here began in 460AD and took 60 years to complete, making it one of the oldest collection of Buddhist carvings in China. This UNESCO World Heritage Site is a fascinating place to spend some time!

As you first enter the park you’ll head towards the Lake Temple, but honestly you want to stay ahead of the crowds so skip everything and come back to it later! The caves are to the left of the temple, just follow the other people. Bear in mind there will always be a few caves that are closed for restoration, they do this on a rotational basis, don’t be too disappointed as there are so many others to enjoy.

The first caves you see are rather small and have clearly been weathered down over the years, but you can enter a few of them and have a quick look around. The next section is the larger caves, full of colour, hidden behind the grand facades of a recently constructed temple built into the cliffs. Half of these were closed when I visited, but the ones I did see were truly magnificent. 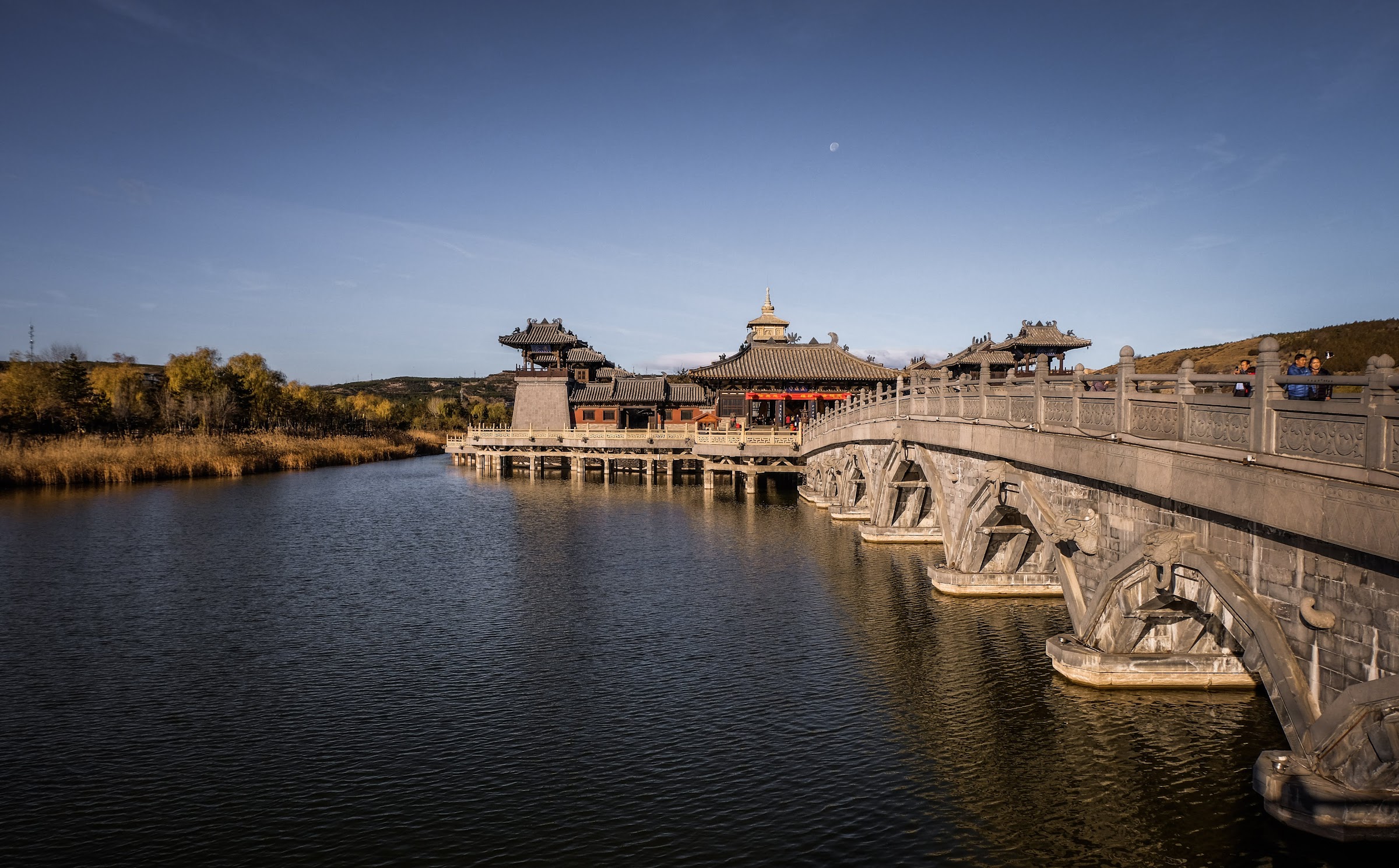 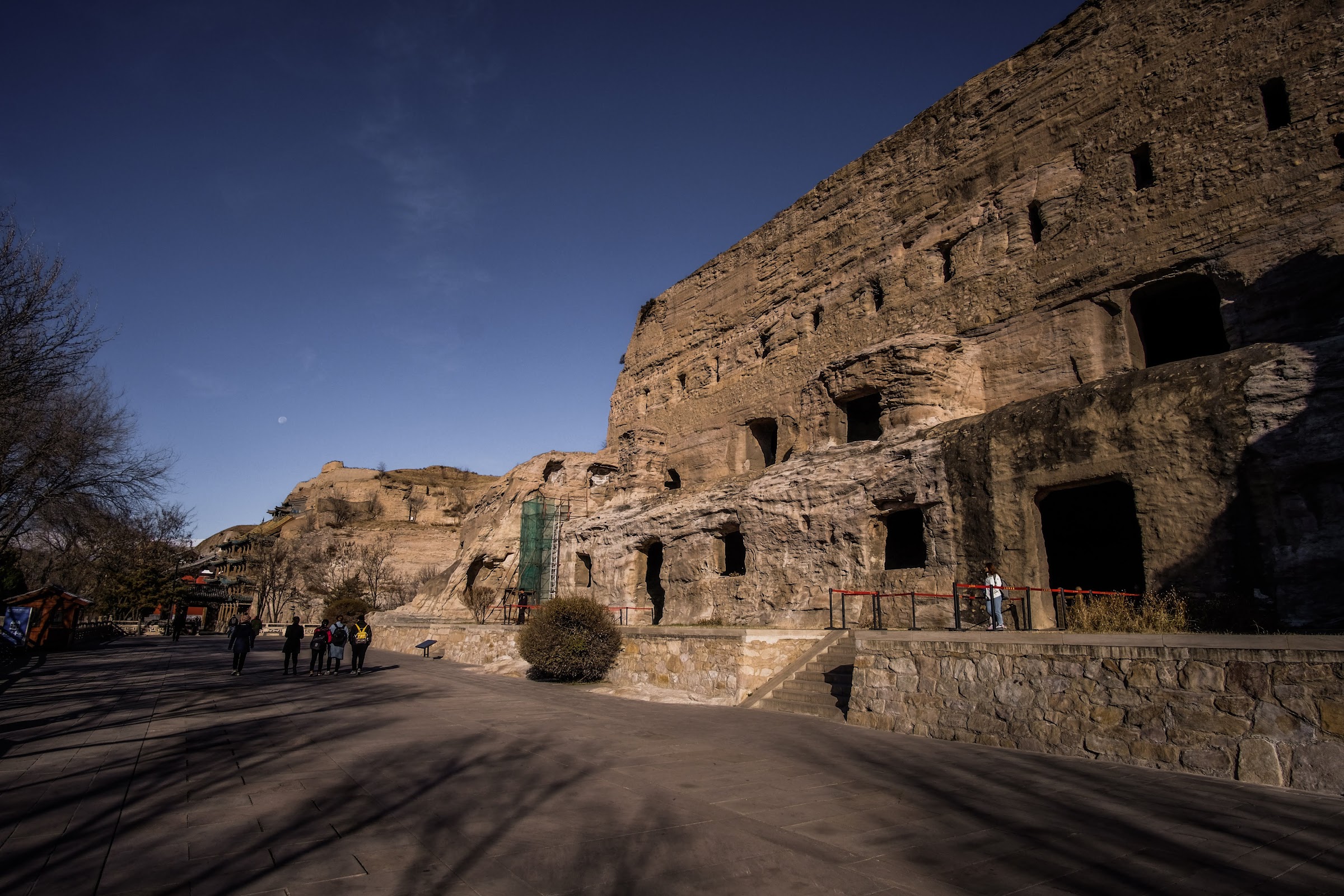 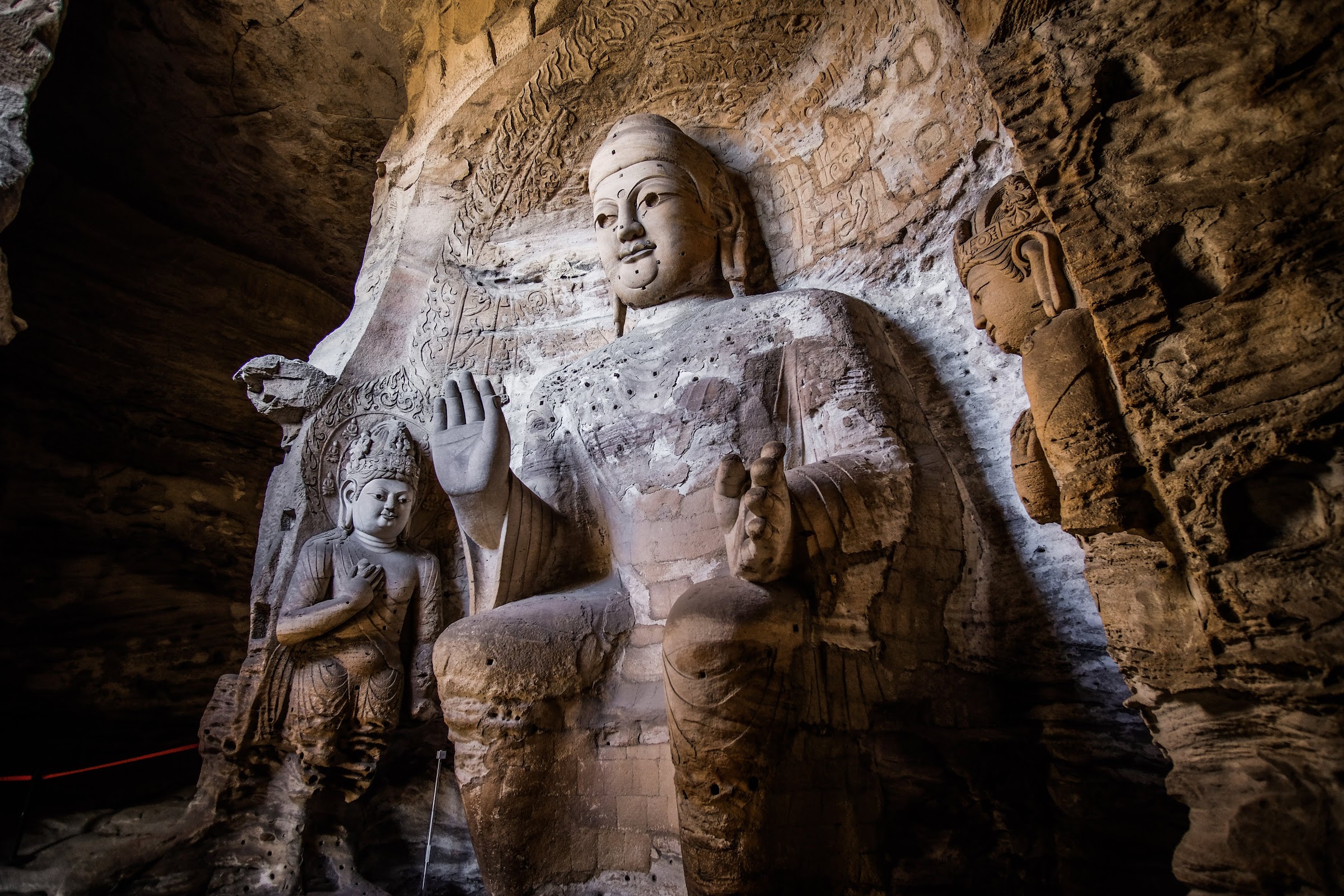 The next section featured many caves of different sizes, heavily decorated with frescoes and stunning carvings, some feature pagodas, and central columns. Then you will see the largest caves, eight of them with enormous carved Buddhas in different poses. The tallest is 17 meters high seated Buddha. While their size is certainly impressive, they have been badly damaged over the years by weather and people. 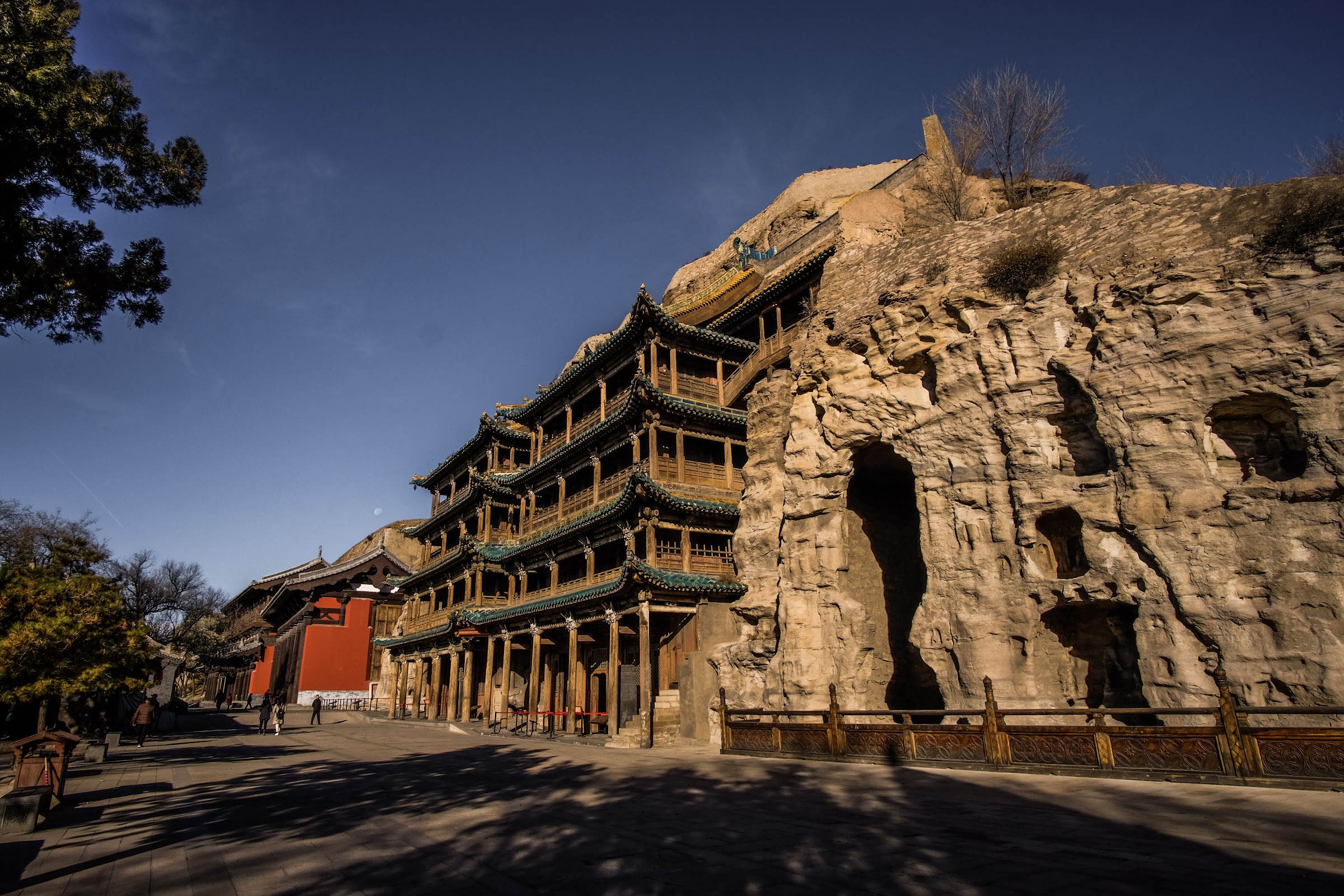 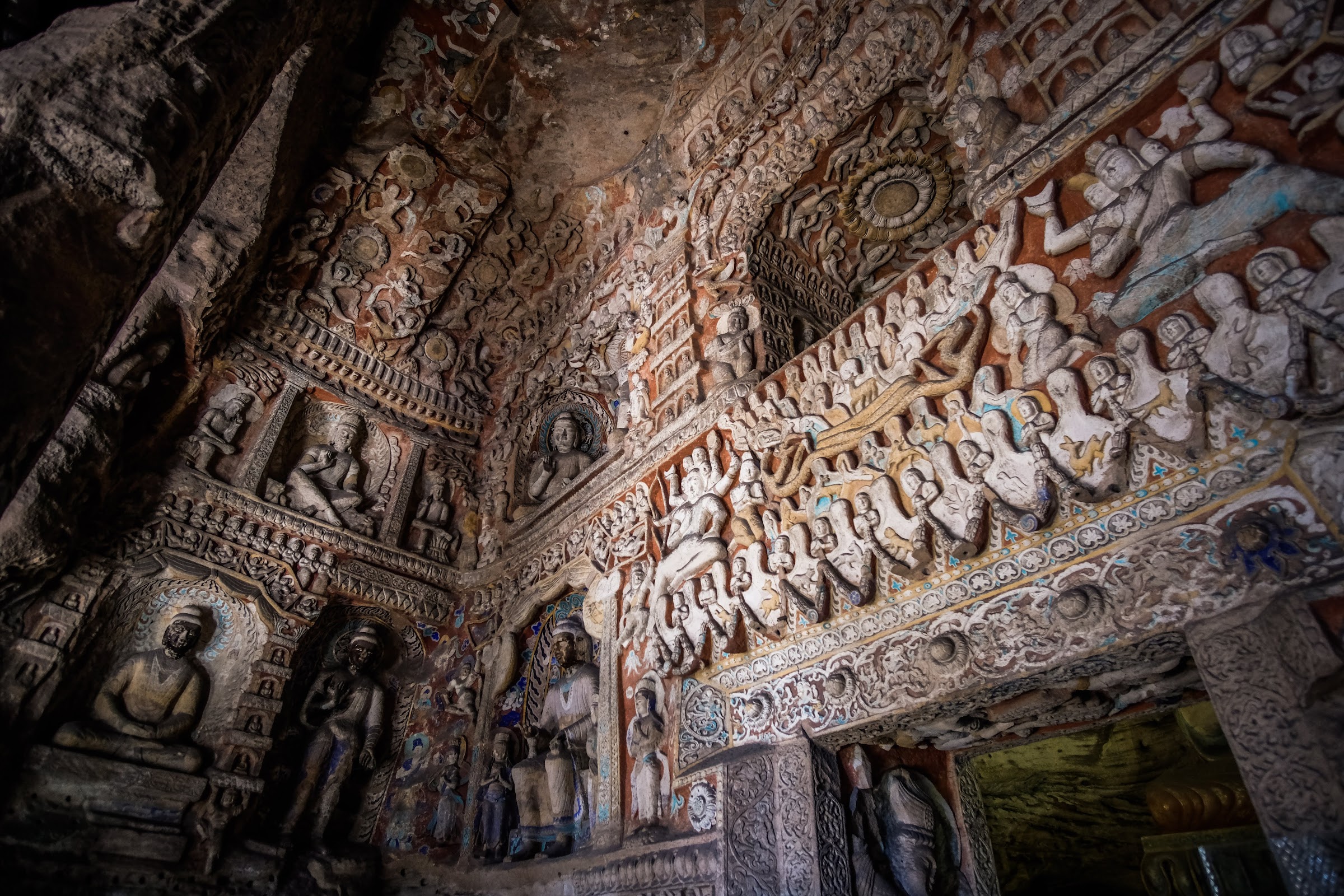 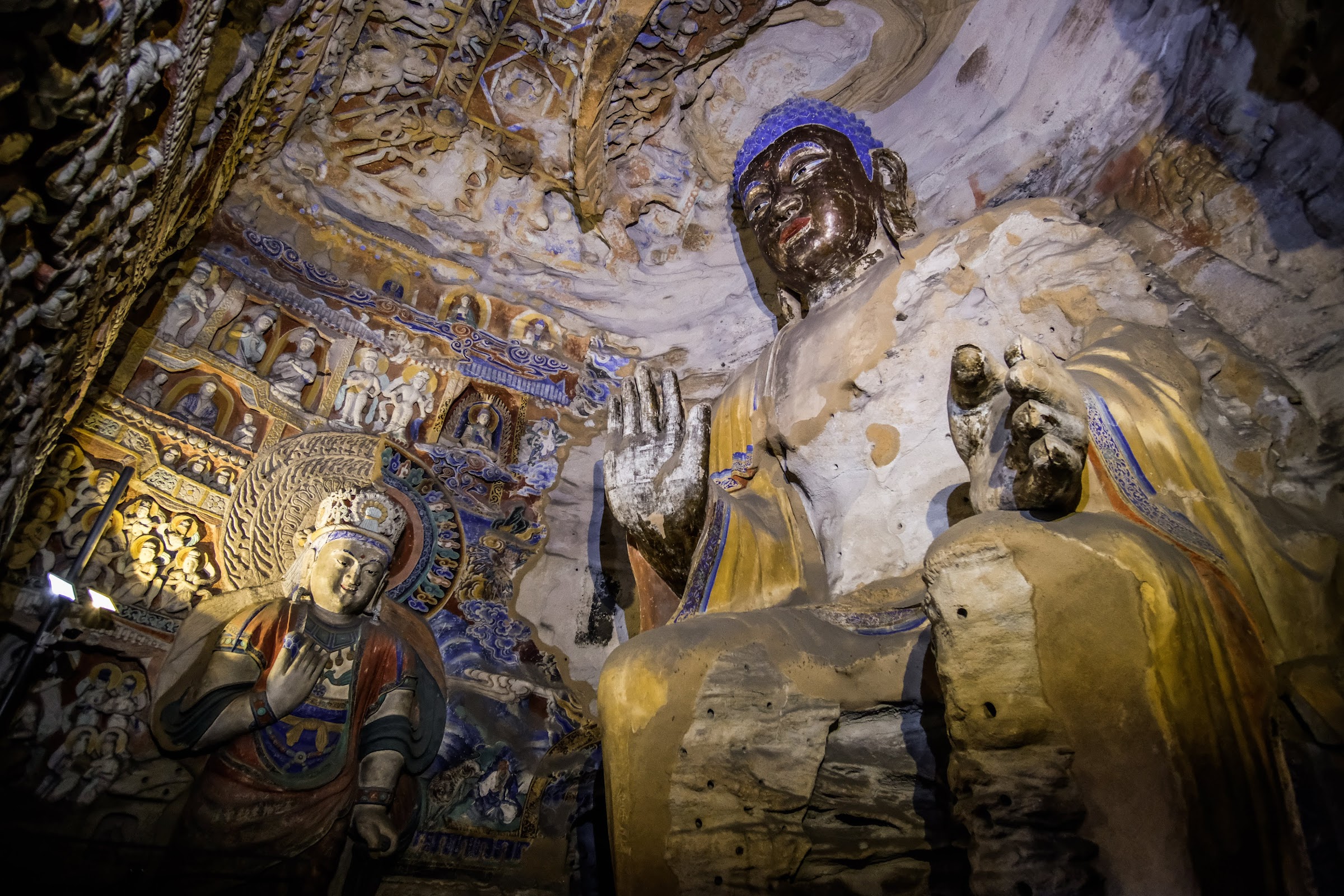 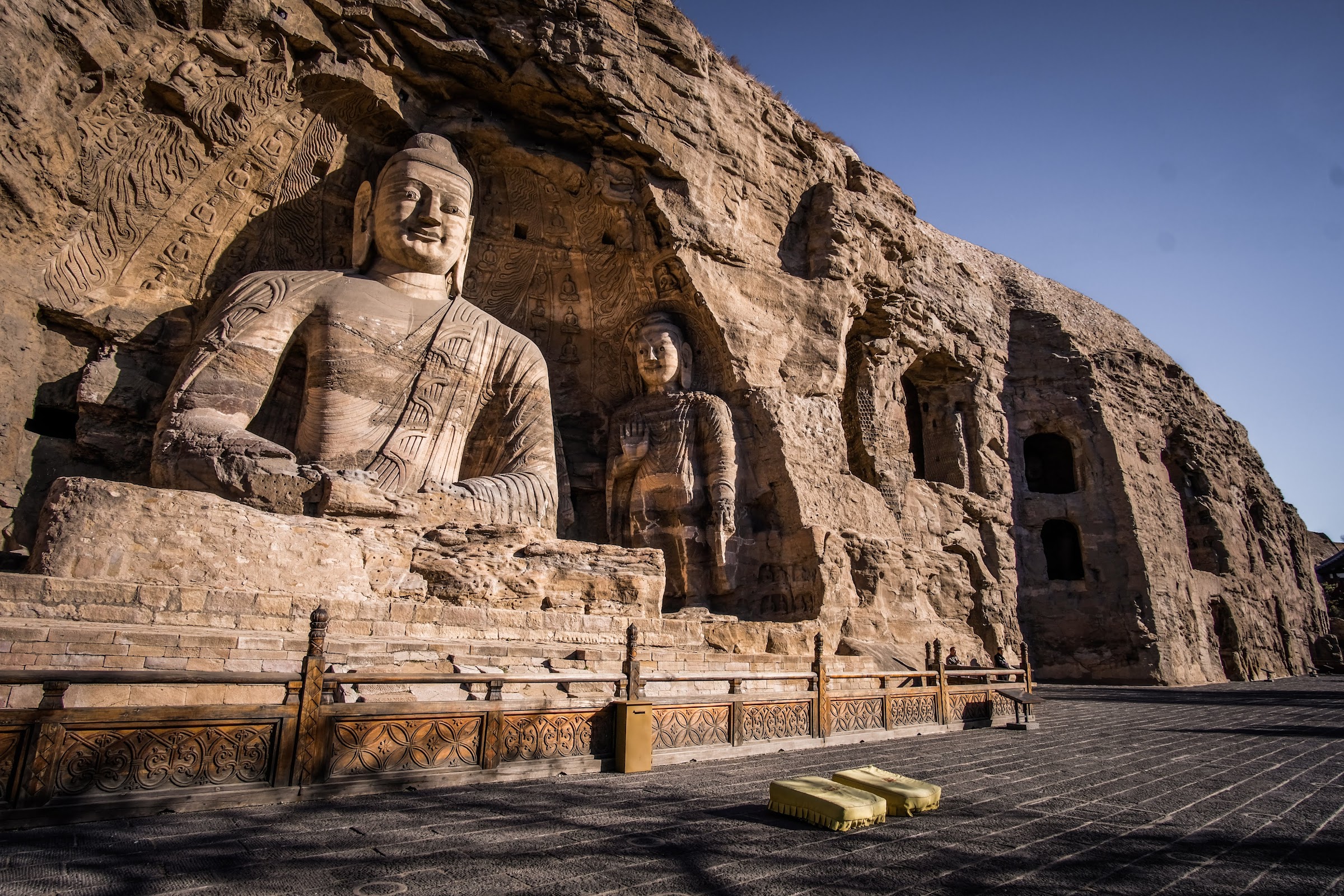 Once you’ve had your fill of the impressive carvings you can head back down into the main park where you’ll find a modern but almost empty museum, deserted food stalls (at least that early in the morning) and a toilet block every two minutes. It’s worth heading back to the start and climbing the small hill to the Temple of the Dragon King, wandering around the Lake Temple and grabbing some food or souvenirs as you exit through the ‘gift shop’ which is more like a ‘gift street’. 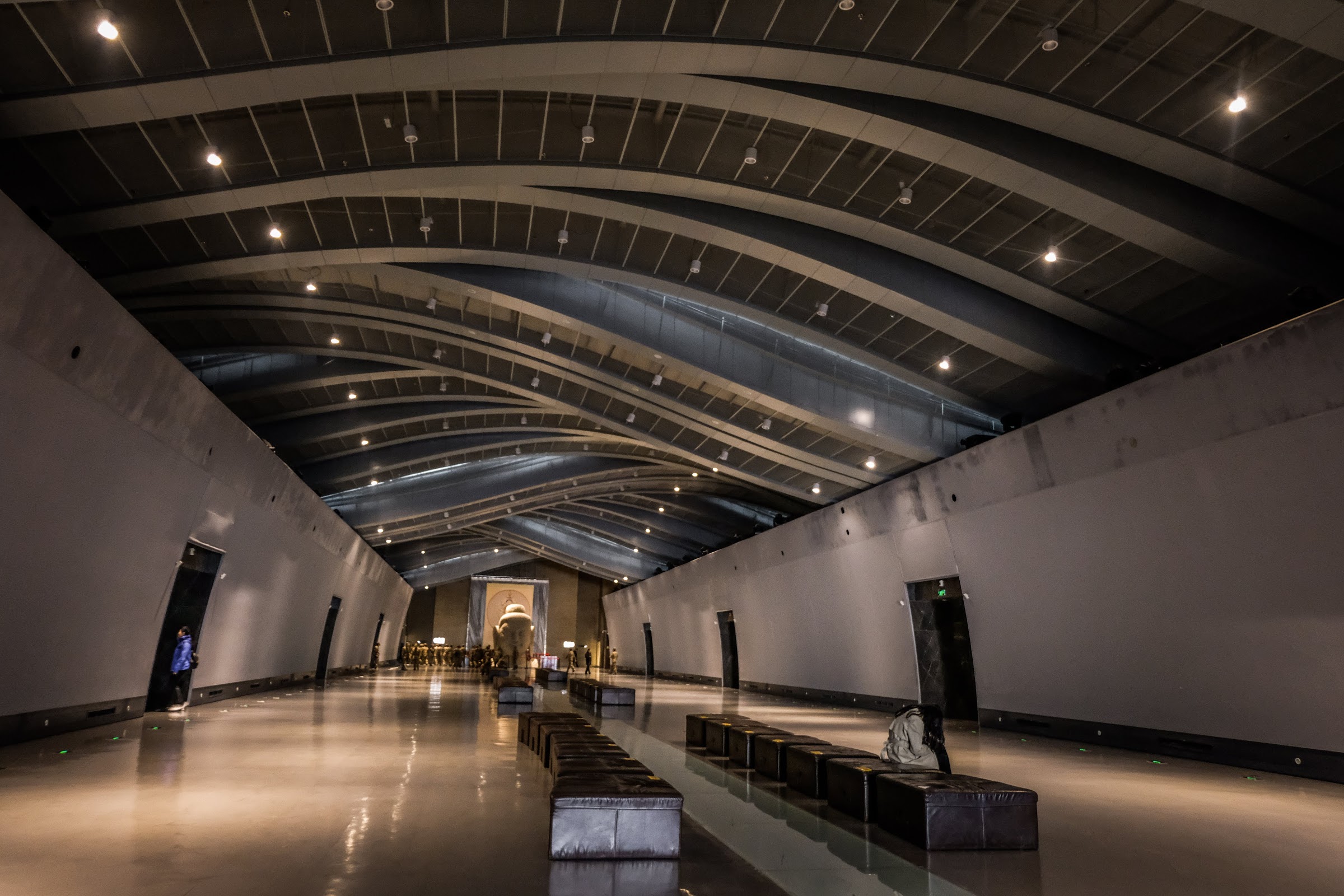 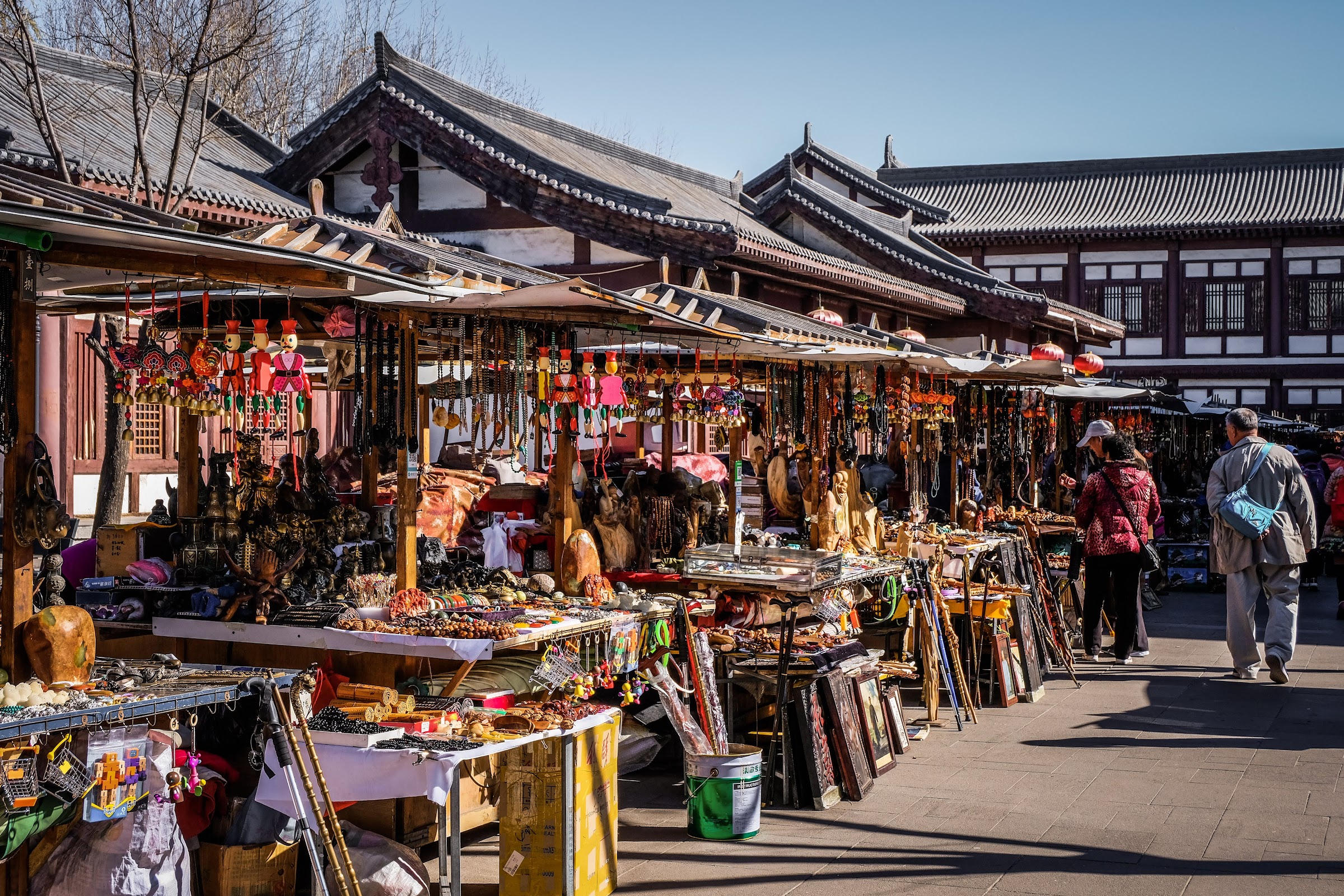 If you have some extra time to kill in Datong then you can head into the old city. Don’t get your hopes up… while the walls are impressive, the interior is just the same as the outside… busy, dirty and loud. While there are some temples to see, you have to pay for each one and let me tell you now, save your money and your patience. There are only so many temples you can visit before you want to give up, so save it for the good ones! The only free thing to see is the Nine Dragon Wall, one of five in China, typically built-in imperial palaces and gardens but this one is just stuck in the middle of the city. 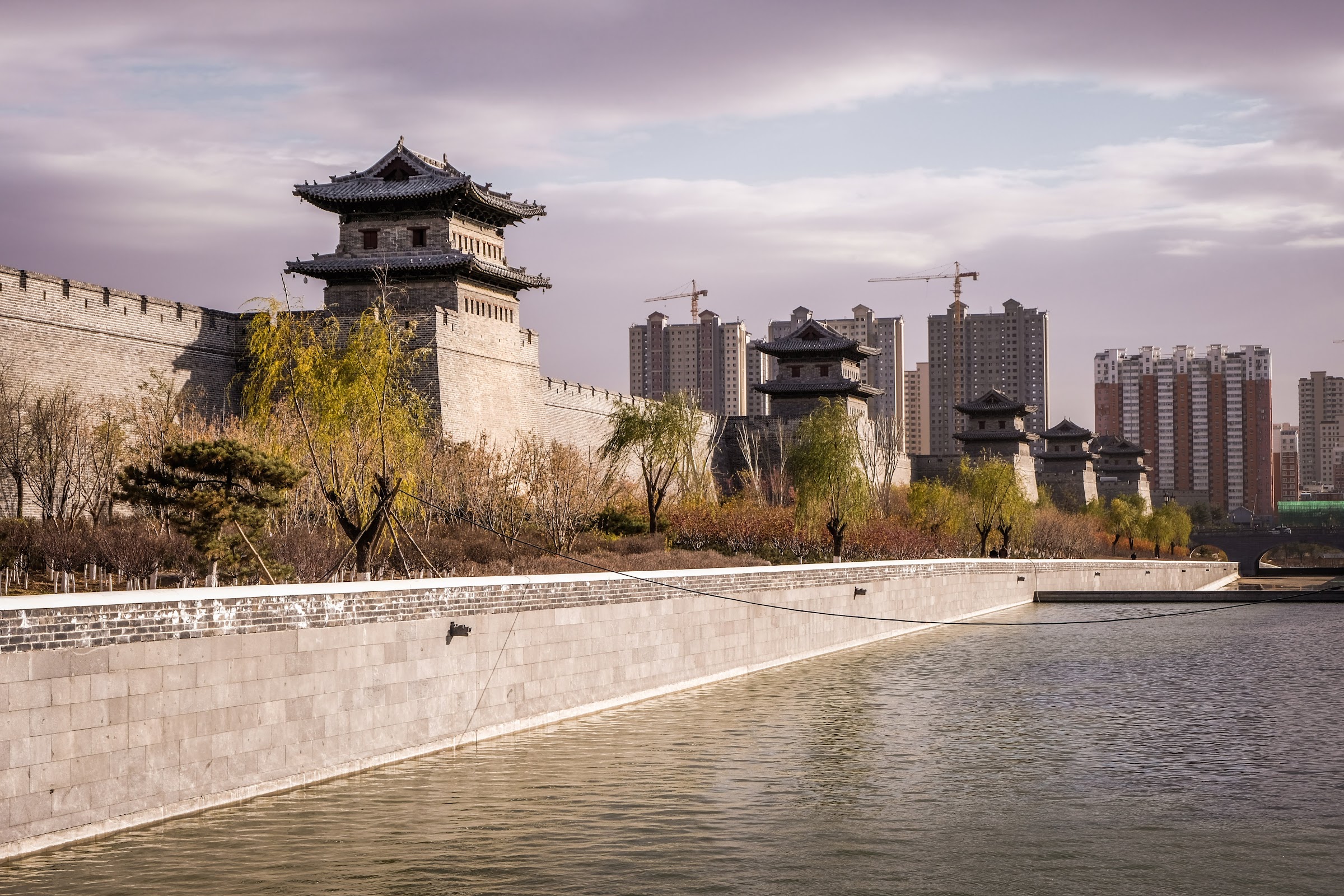 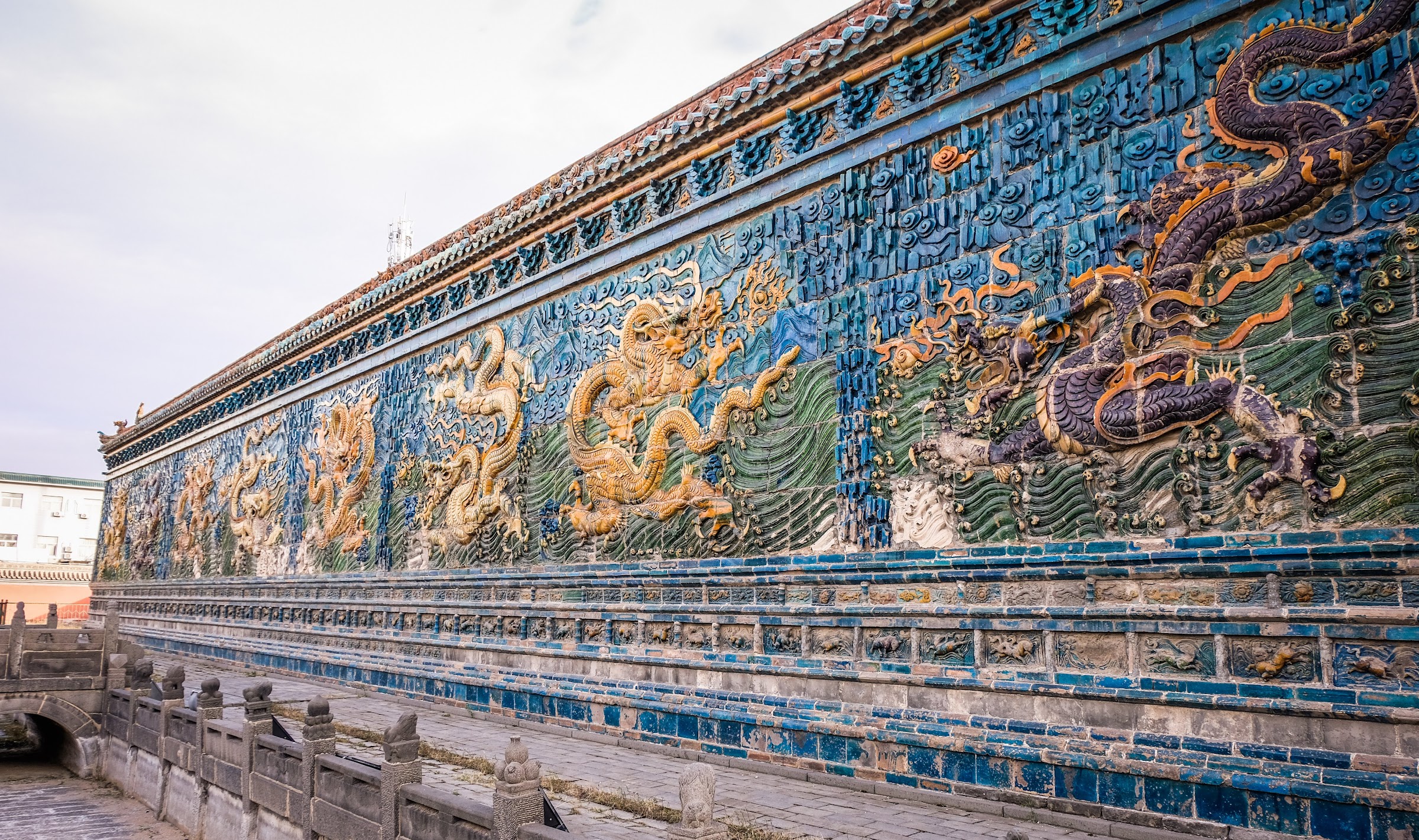 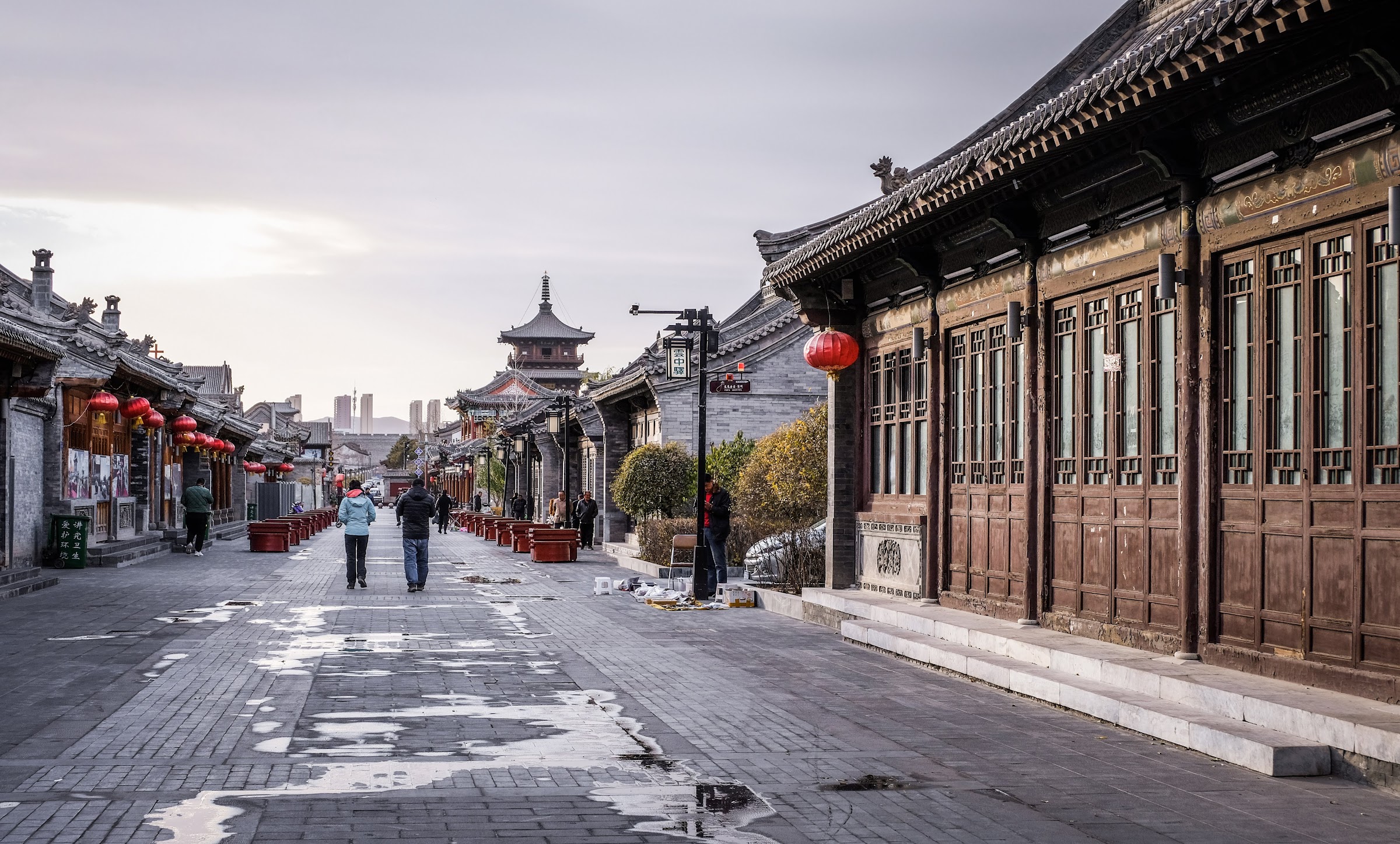 Getting to Datong from Beijing by train is easy, book your tickets through the CTrip app or at the central Beijing Railways Station as early as possible so you don’t end up with a “standing” ticket for 5 hours.

From Datong, it’s easy to head south to the popular old town of Pingyao, but I needed to stretch my legs so I took a train back to Beijing and made my way to Tai’An to climb 4000 stairs…