After two weeks of seeing various Chinese cities I was desperate to get into the mountains of Sichuan. I wanted to visit the rainbow lakes and forests of Jiuzhai Valley National Park but it was closed due to landslides, so I chose the next best option, Huanglong National Park. And boy, was it worth it, because I’m pretty sure I ended up in Narnia.

I’m still blown away by this day. It was perfect. Beautiful, quiet, awe-inspiring. The white snow, black forest, and turquoise pools gave me the best photos of this trip and I cannot recommend this park enough! 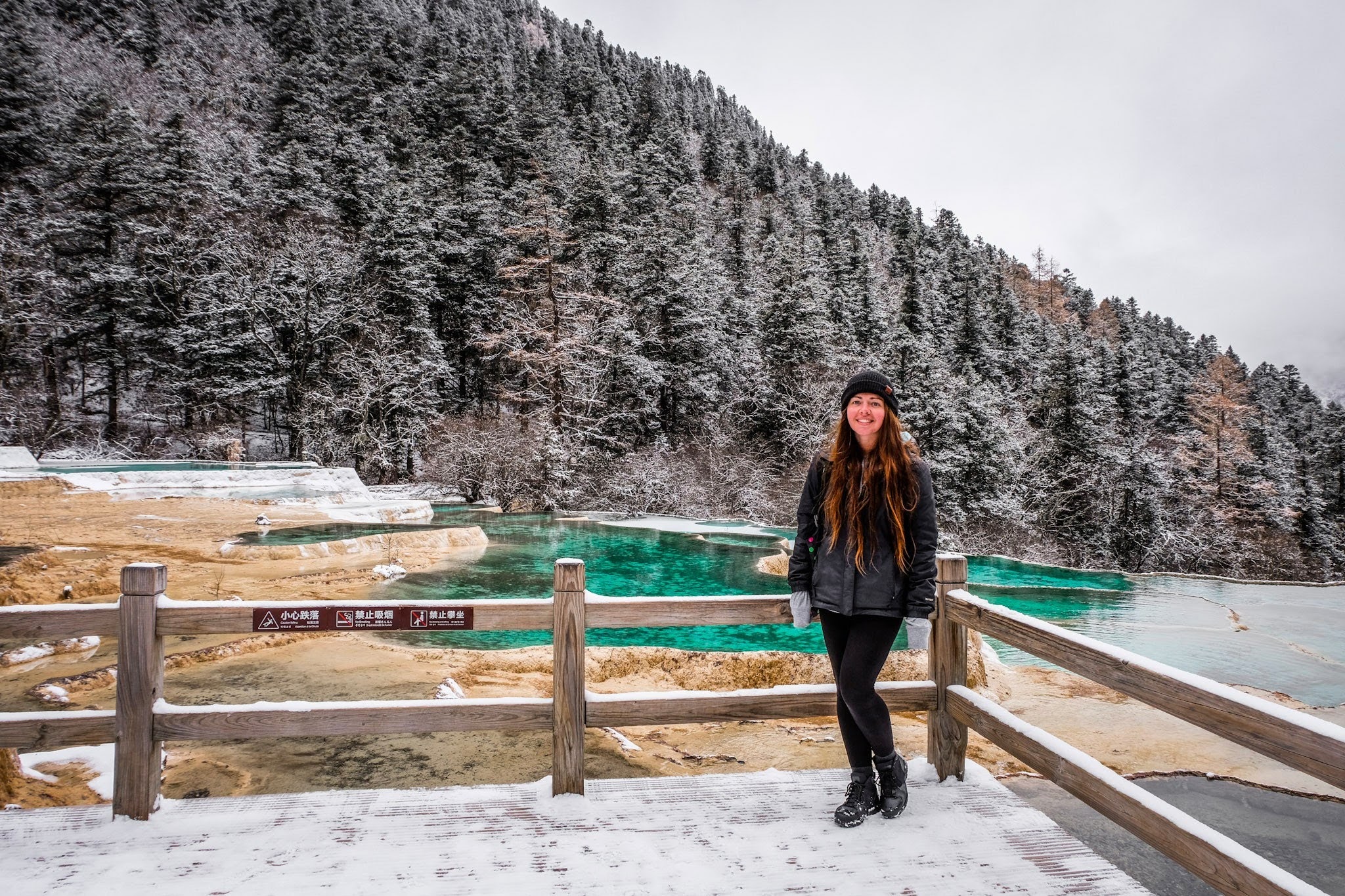 To get to Huanglong, you need to be prepared for an absolute mission. Make your way to Chengdu (home of the giant pandas!) and take the metro to Chadianzi Bus Terminal where you’ll have to battle the masses for a ticket on a bus heading to the small town of Songpan. It’s a long winding road through a deep valley surrounded by snow-capped mountains, absolutely stunning.

Songpan is a charming little mountain city with a few great choices for food and accommodation. I stayed at Emma’s Guesthouse, with the nicest staff and a cosy restaurant, plus heated blankets which are essential in the winter! There’s a walled part of the old city with two gates at either end which is a nice place to explore, day or night. 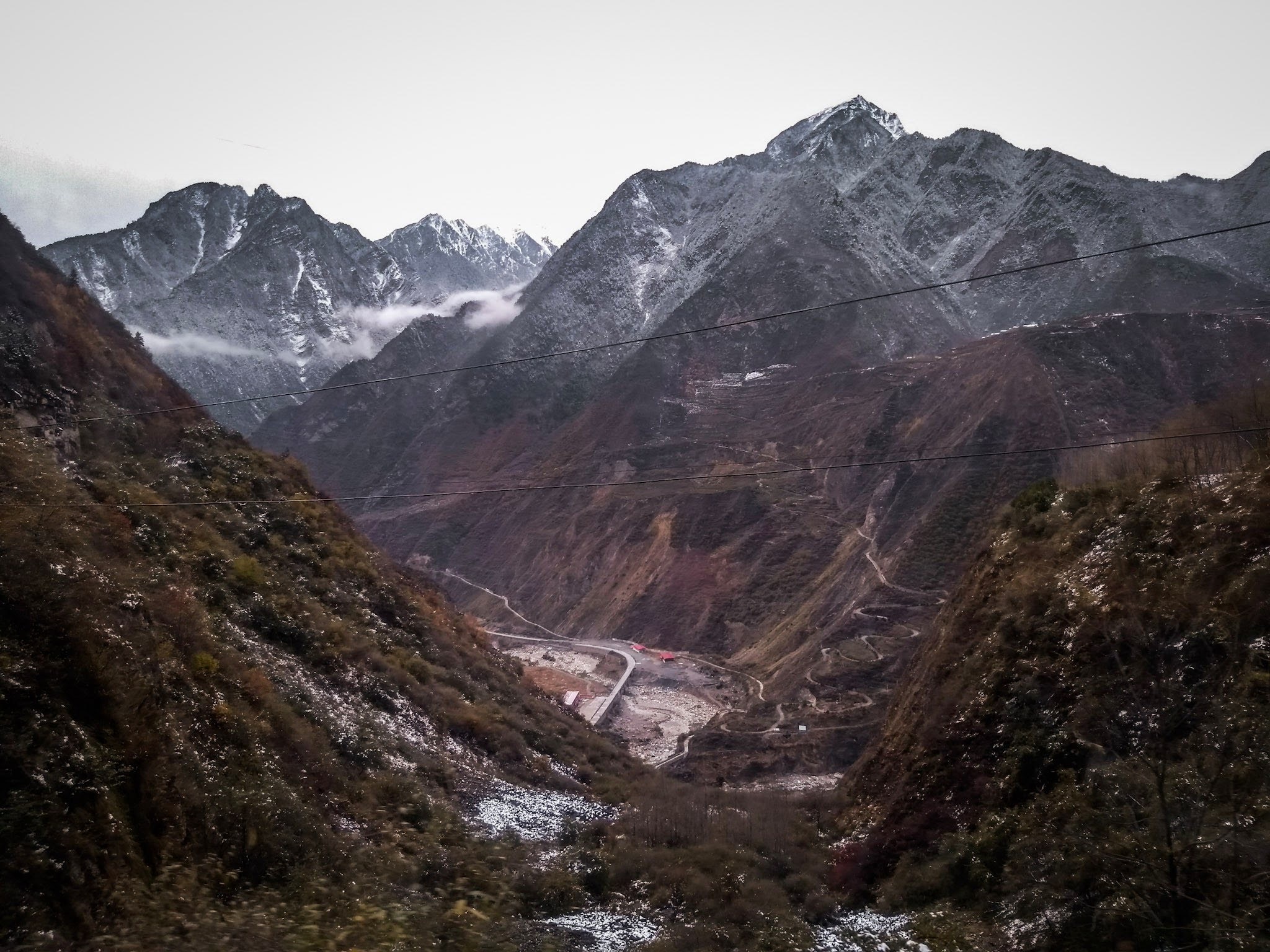 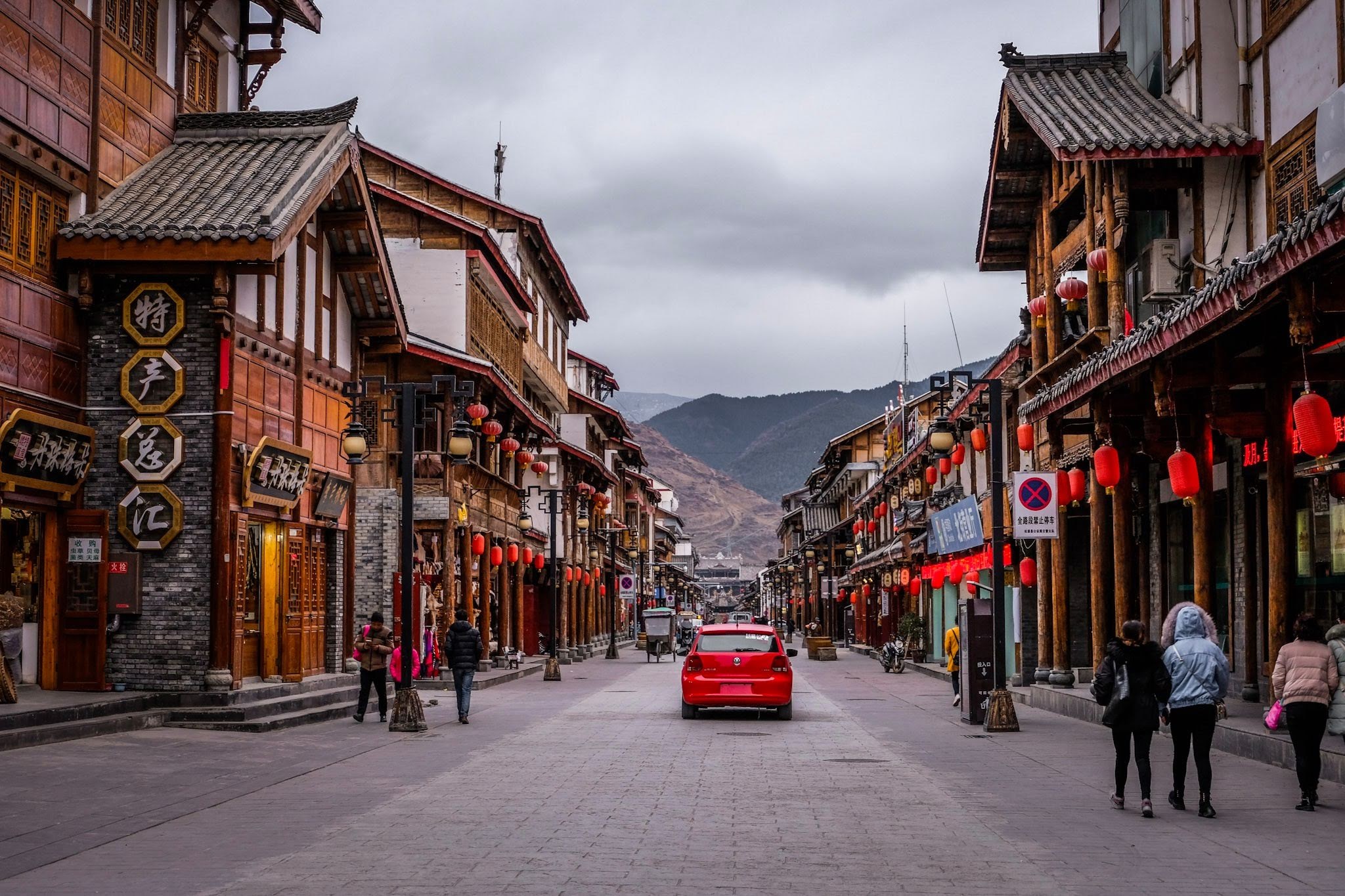 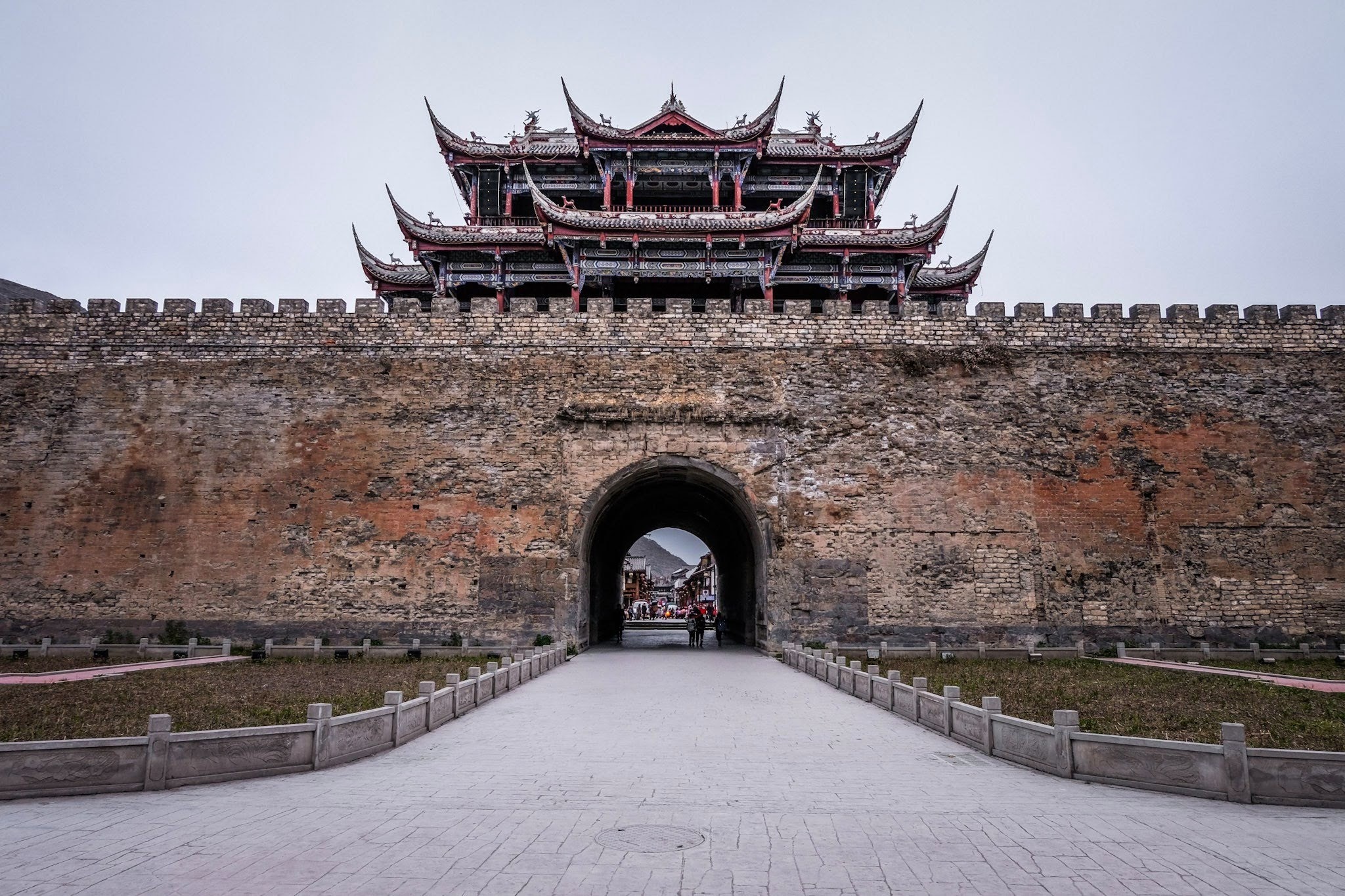 Getting to Huanglong from Songpan

Getting to Huanglong from Songpan was a real pain. I read online (in multiple blogs) that there were buses in the morning but I had to get up early to make the most of the day. I got up at 5am (still dark and very cold) only to find the bus station closed. I came back at 6 and eventually they opened, only to inform me that there was no bus, due to landslides. The hostel suggested I find other travellers to share a taxi but this place is deserted in November. So, in the end, I had to pay ¥200 (£22) for the taxi by myself, but it was a very good deal seeing as it’s an hour drive each way, and he waited for four hours while I explored.

It also meant we arrived before the park actually opened. The ticket office was closed, but the guard at the gate let me in as long as I left my ID behind to pick up and pay on the way out. I’m not ashamed to admit that I picked up my ID and left without paying because they didn’t ask me to. I saved ¥200 (the cost of the surprise taxi) and I was getting sick and tired of all the expensive entrance fees all over China, so avoiding just one was a huge bonus!

Once I entered the park all of the hassles was forgotten. I followed a snowy path as it wound through the forest and came across the lowest tiers of the turquoise pools cascading over the yellow limestone and I just stood there doing my best Kevin McCallister impression. IT’S SO BEAUTIFUL. 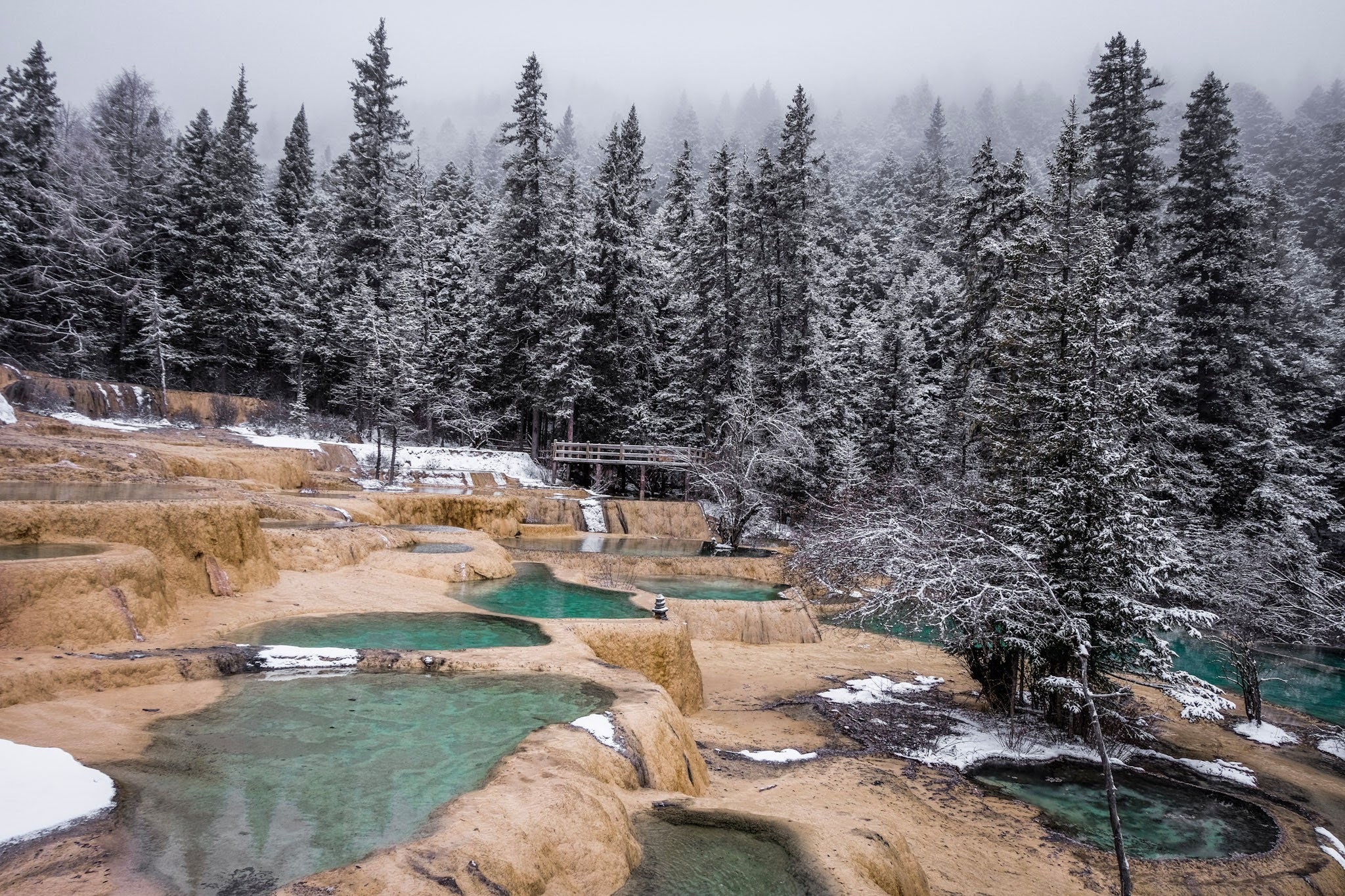 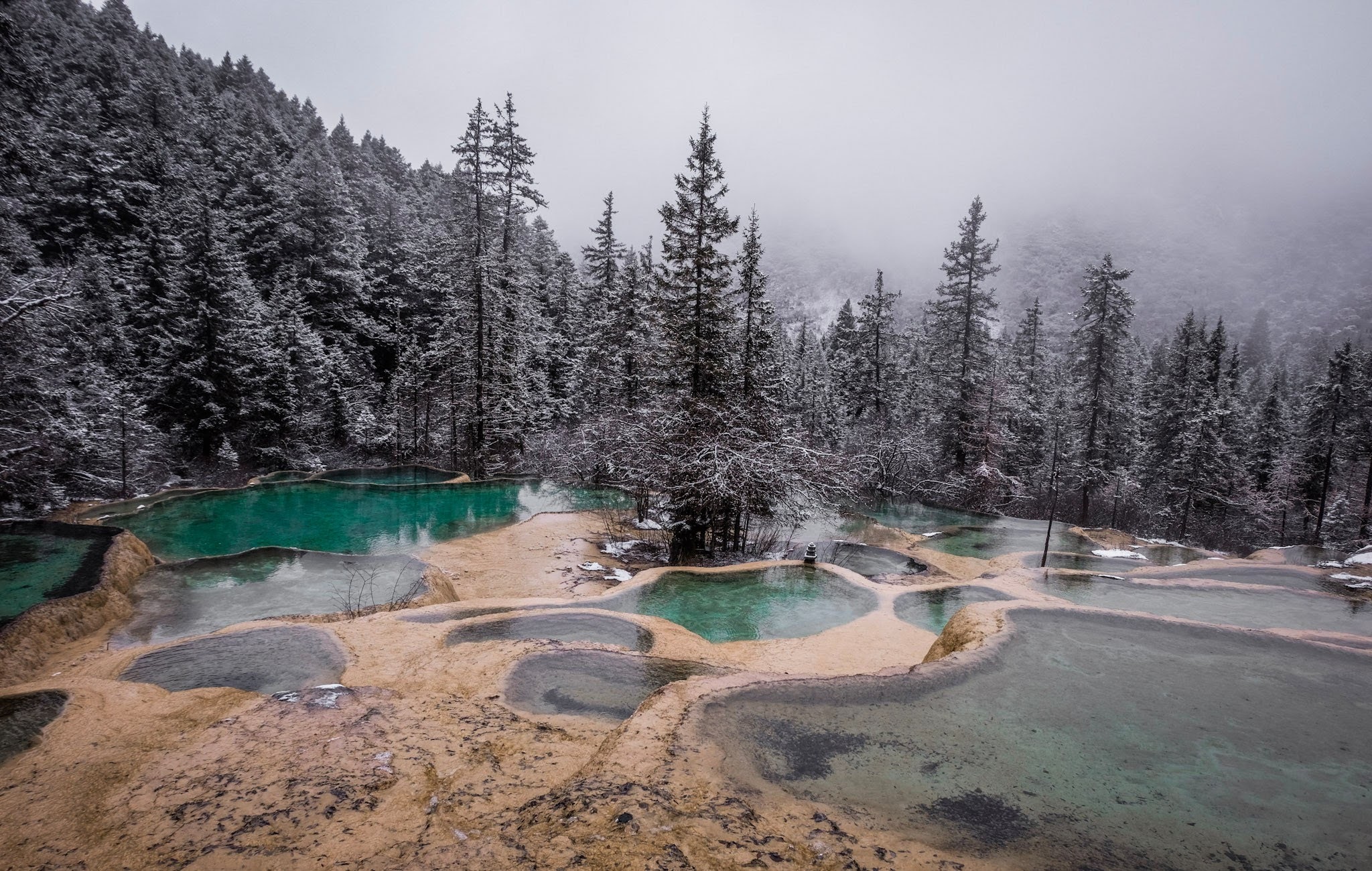 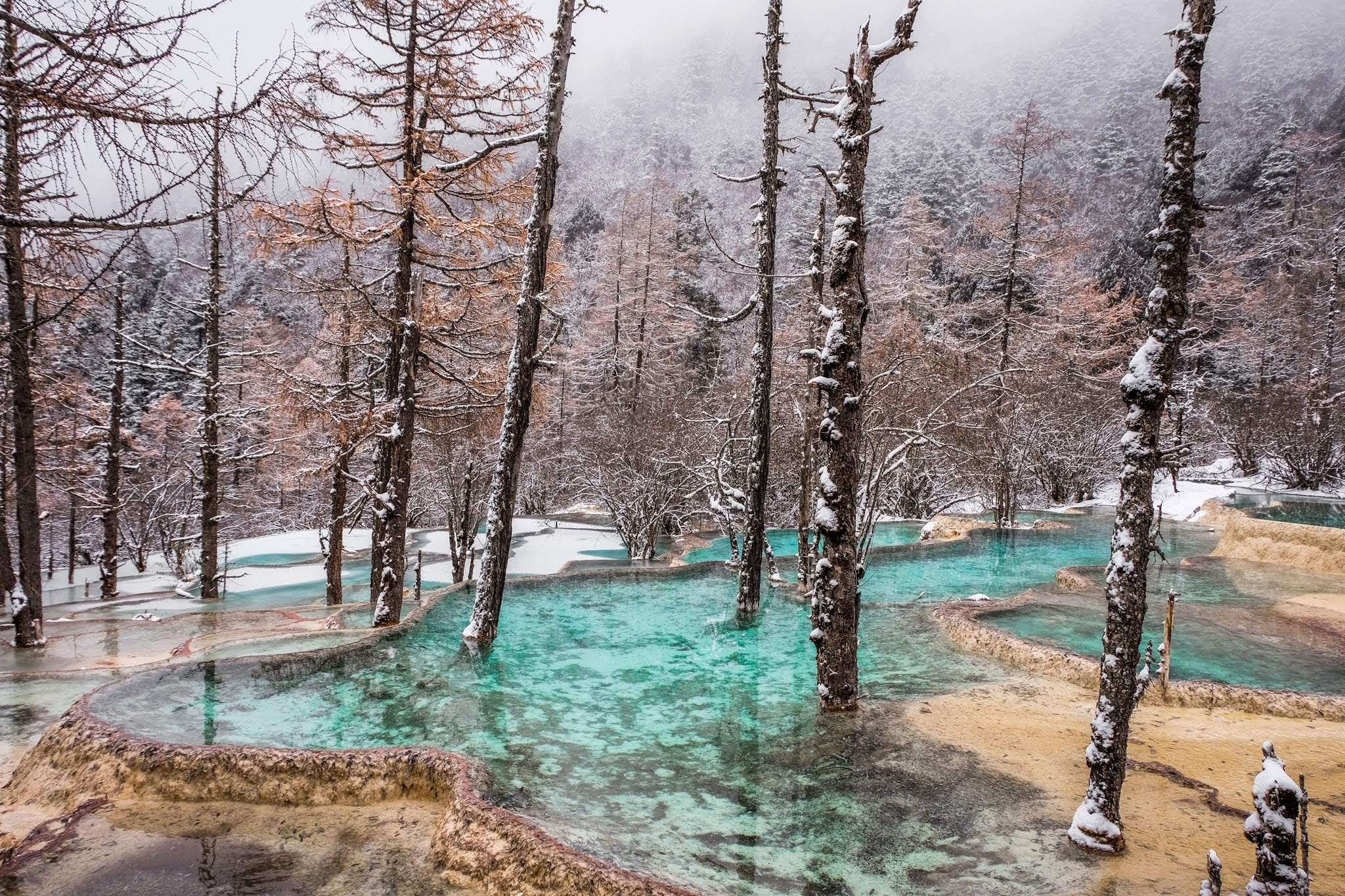 I spent those four hours wandering through the park, climbing higher into deeper snow and around bigger pools. The only people there were the staff clearing the path, each of them greeting me with a cheery “Nǐ hǎo!” as I tried to avoid slipping on the ice.

As I got to the top of the park I came across a huge temple, the bright colours a shocking contrast to the muted tones of the landscape around it. Behind that, the largest area of pools with a high path around the edge to really enjoy the view. 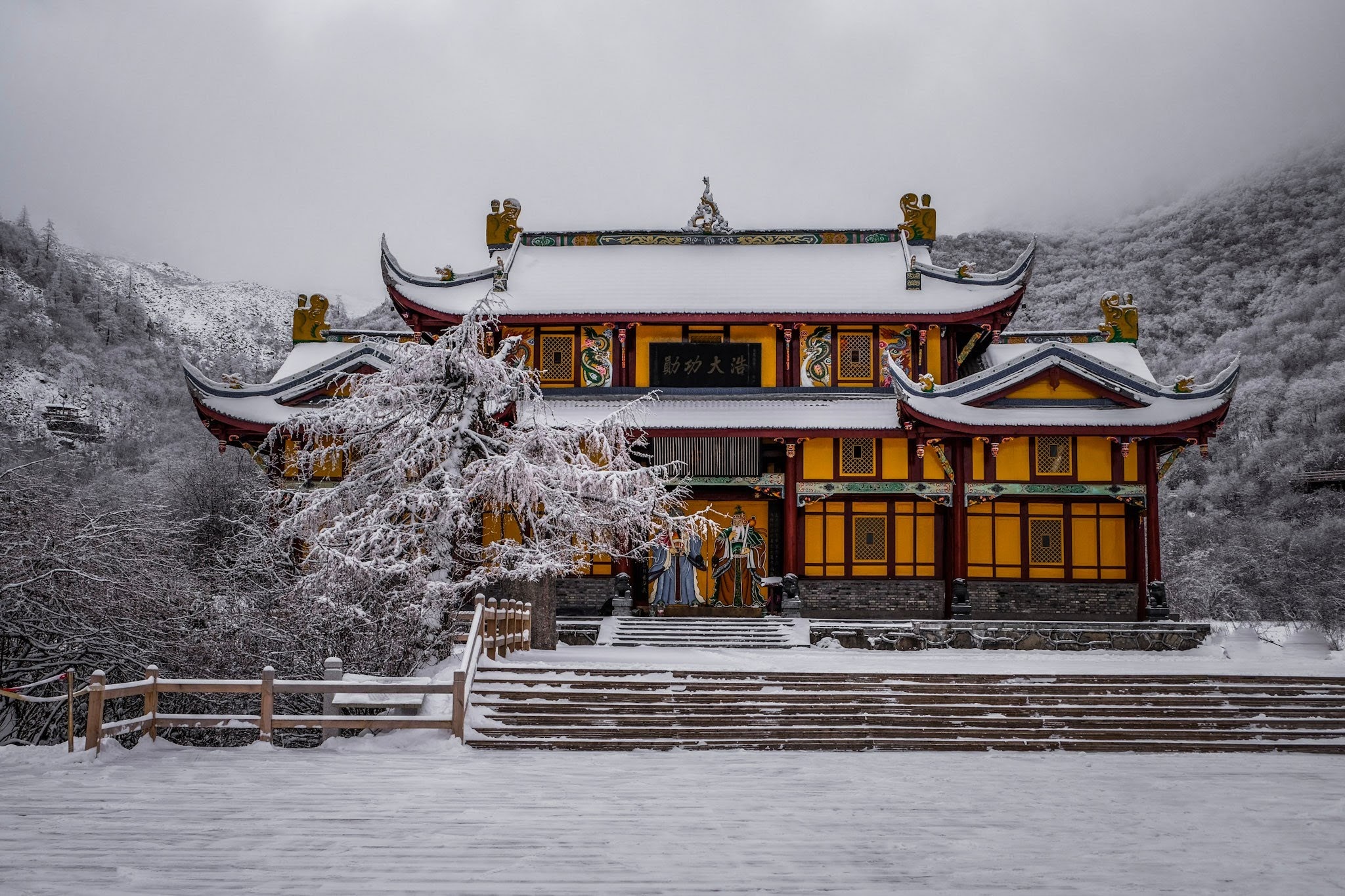 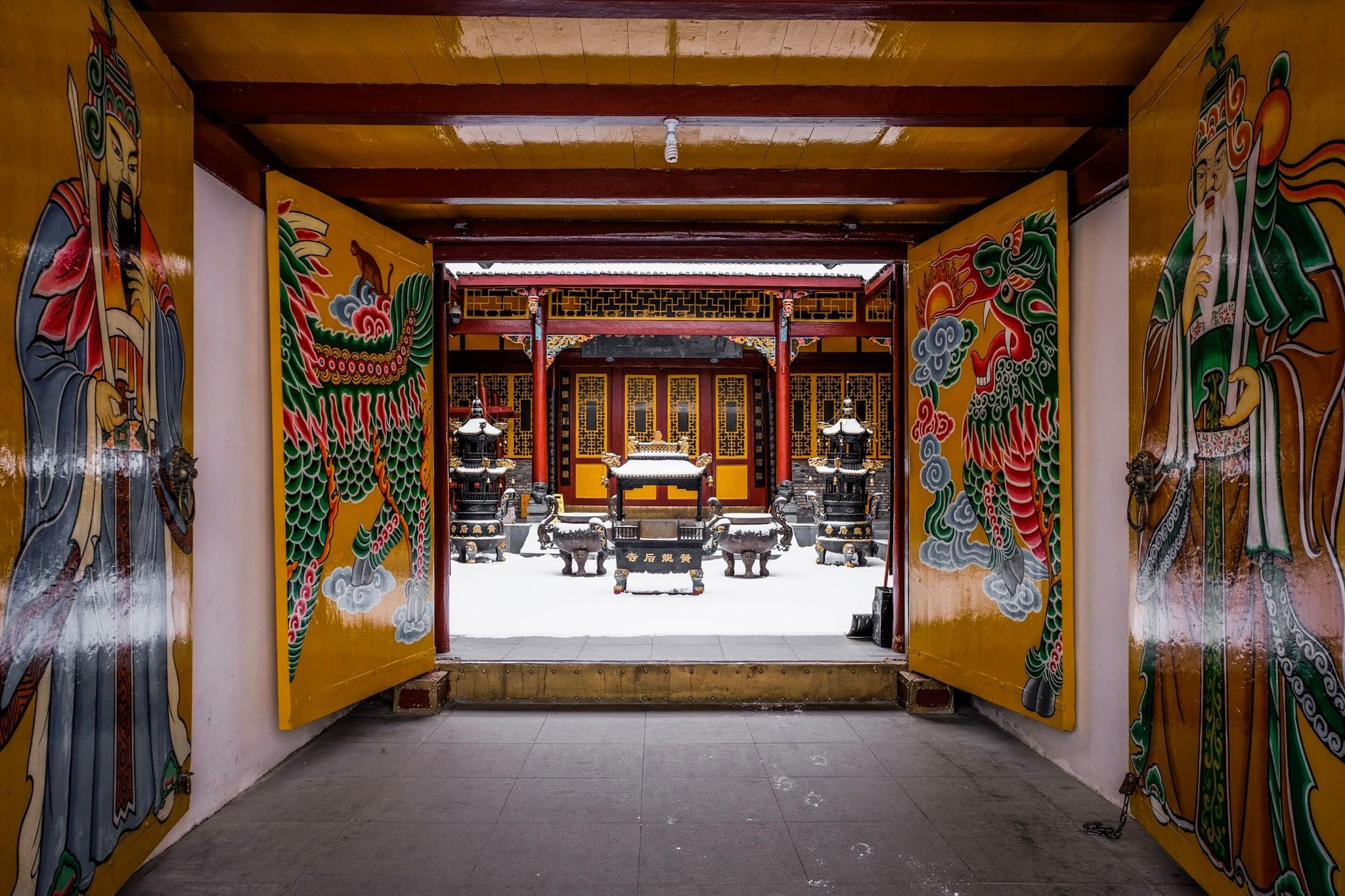 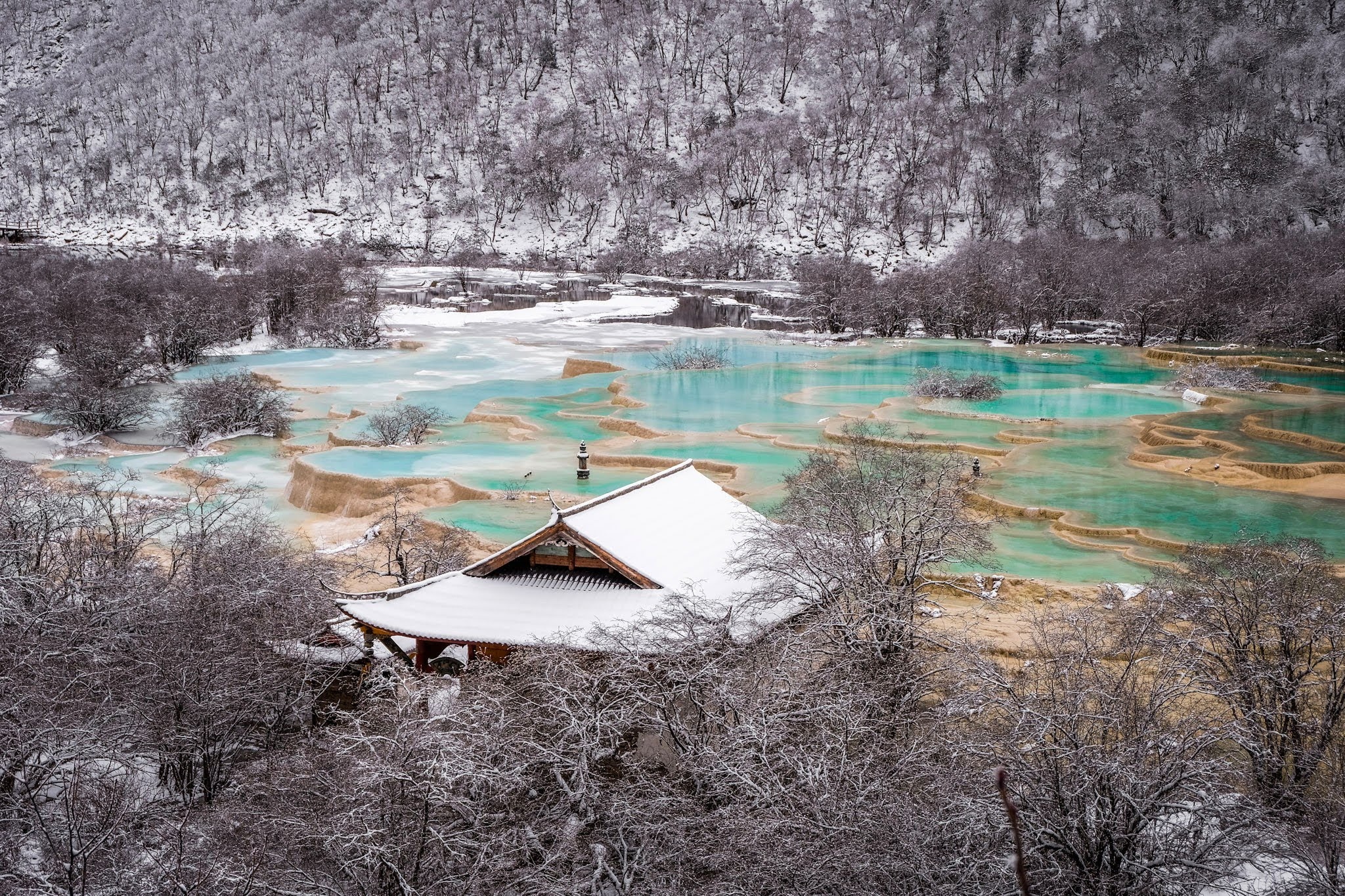 It wasn’t until I started to head back to the gate that I met other visitors. Of course, they had all ridden the cable car up and were making the most of the oxygen bars throughout (it’s surprisingly high, with a max altitude of 3600m). I followed the trail up there just to catch a view of the park from above, took a short cut through the forest and eventually made it back to the car on time even though I stopped to take hundreds of photos on the way.

At this point I was freezing, so I was ecstatic to arrive back to Emma’s where I could take a hot shower and get into my heated bed with a cup of green tea. It didn’t feel real! I had just walked through the perfect winter wonderland and now I was back in the bed I left only 6 hours before. 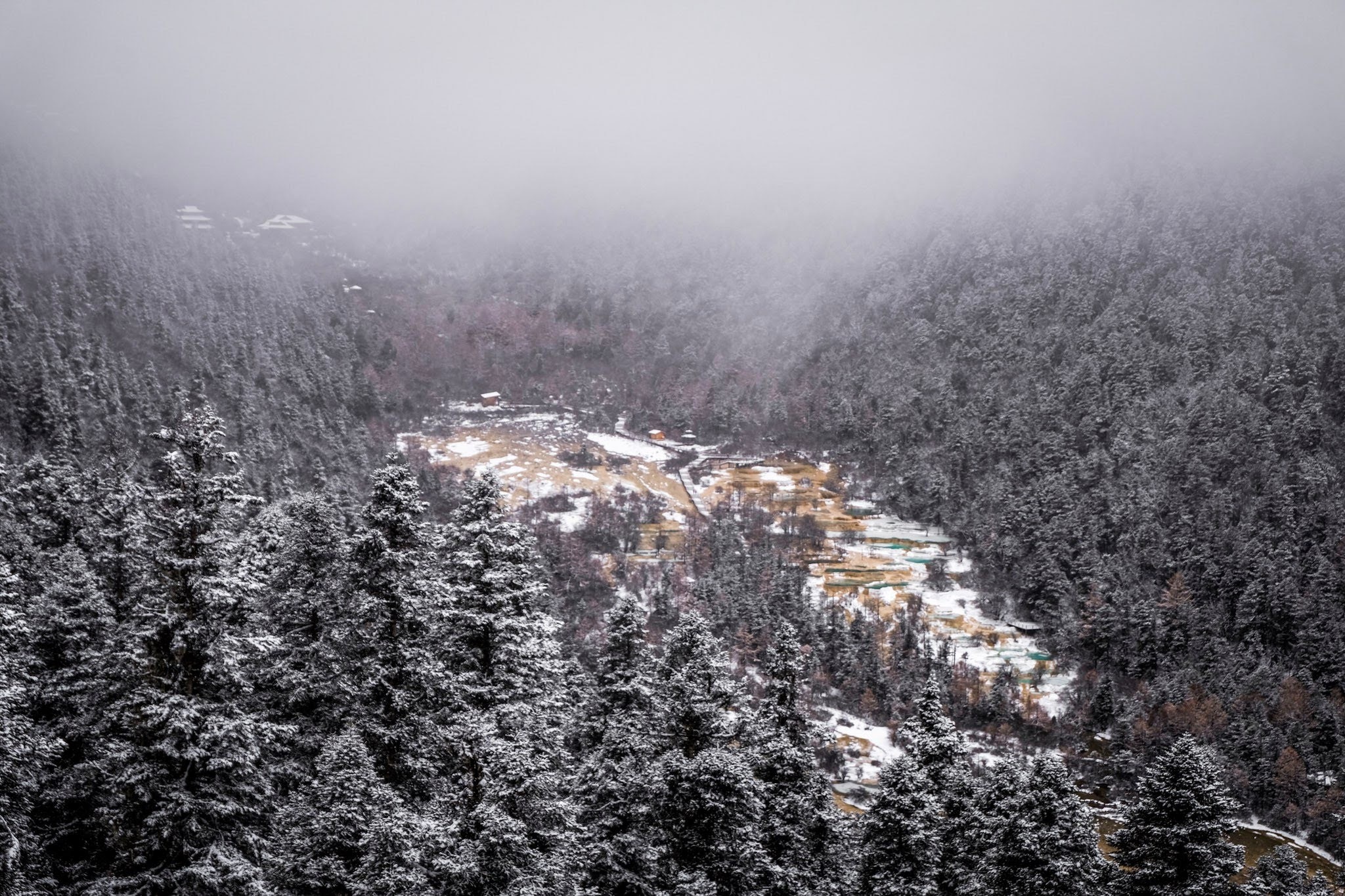 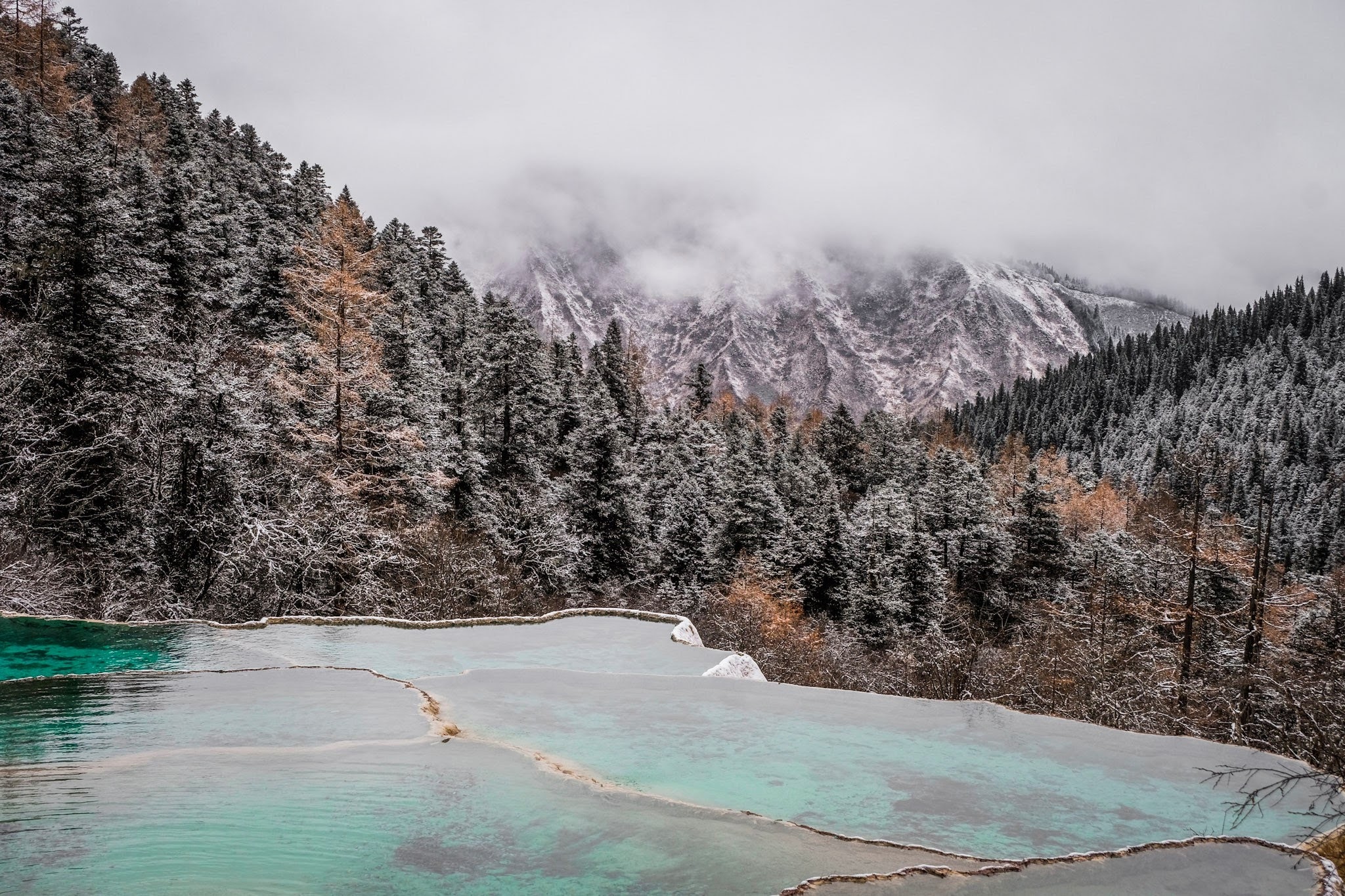 I’ll be honest, I don’t know magical it would have been without the snow… Although I imagine it’s just as stunning in the summer when everything is green and alive.

Have you visited Huanglong National Park? I’d love to hear about your experience! Feel free to leave a comment below.