So, in case you haven’t realised by my sarcastic ranting throughout the blog, China is expensive and it’s almost impossible to have a free adventure anywhere. You can’t even go for a hike without paying an entry fee. Until now. I found a free one! FREE! It’s not for the faint-hearted… but if you have the stamina for a steep, high altitude climb then this hike is well worth the struggle. If not, just take the cable car!

Shika Snow Mountain is a peak that lies near the town of Shangri-La, once called Zhongdian but renamed in 2001 to promote tourism. Shangri-La was a fictional town in a book called Lost Horizons by James Hilton. It’s described as a mystical, harmonious valley enclosed in the western end of the Kunlun Mountains in China. It has become synonymous with any earthly paradise, a mythical Himalayan utopia, a permanently happy land, isolated from the world. Now you can just hop on a local bus from Lijiang!

The old town is a wonderful place to get lost in the winding, cobbled streets, lined with ancient teahouses and shops selling the usual touristy souvenirs. Make sure you visit Moon Square and climb the stairs to Da Gui Shang temple so you can take your turn spinning one of the largest prayer wheels in the world! You can also visit Songzalin Monastery on the shores of a small lake, but if you’re a tourist you aren’t allowed anywhere near it without paying a hefty “white tax” of ¥115 ($16.75) and it sounds very disappointing inside. 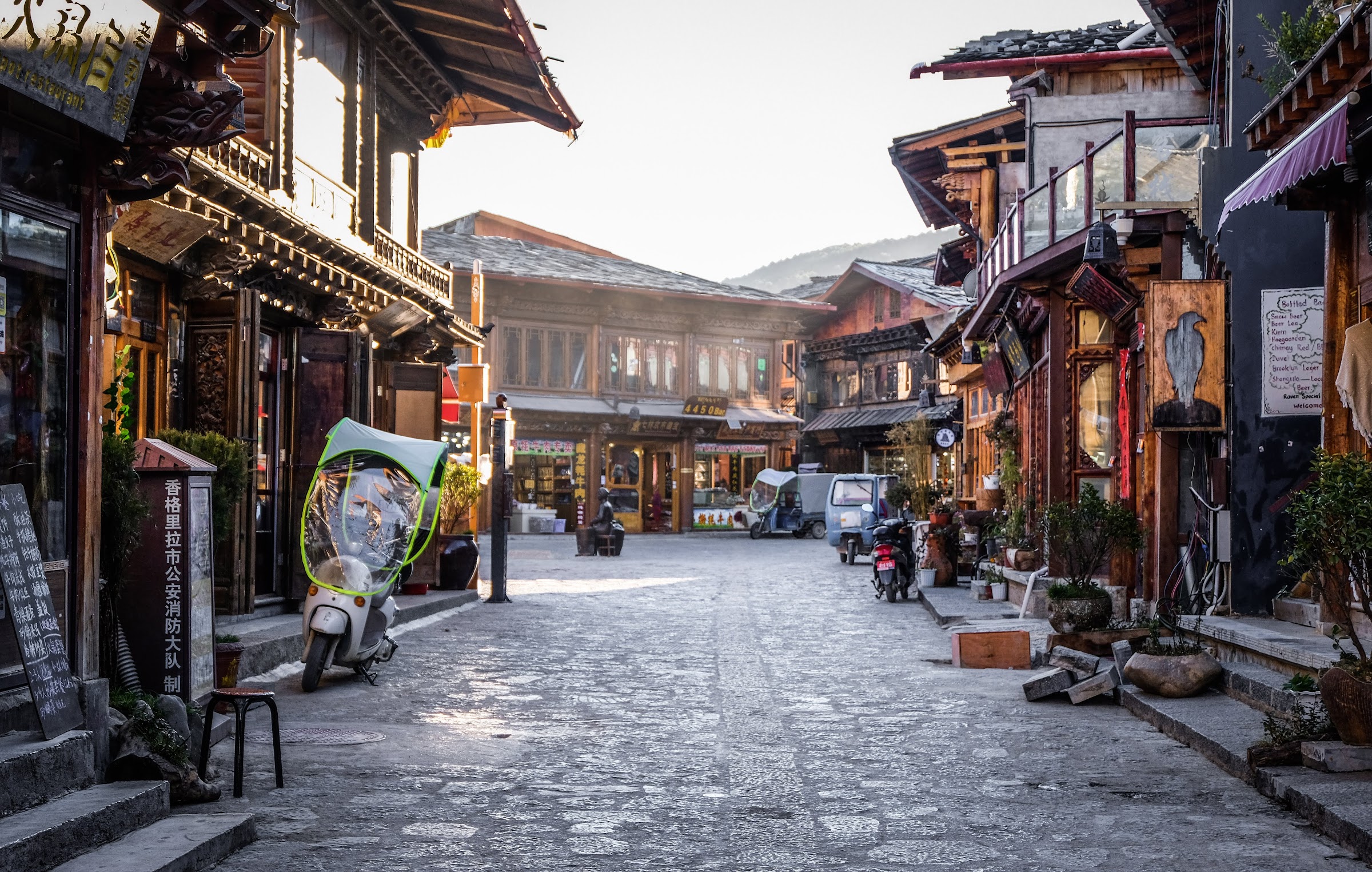 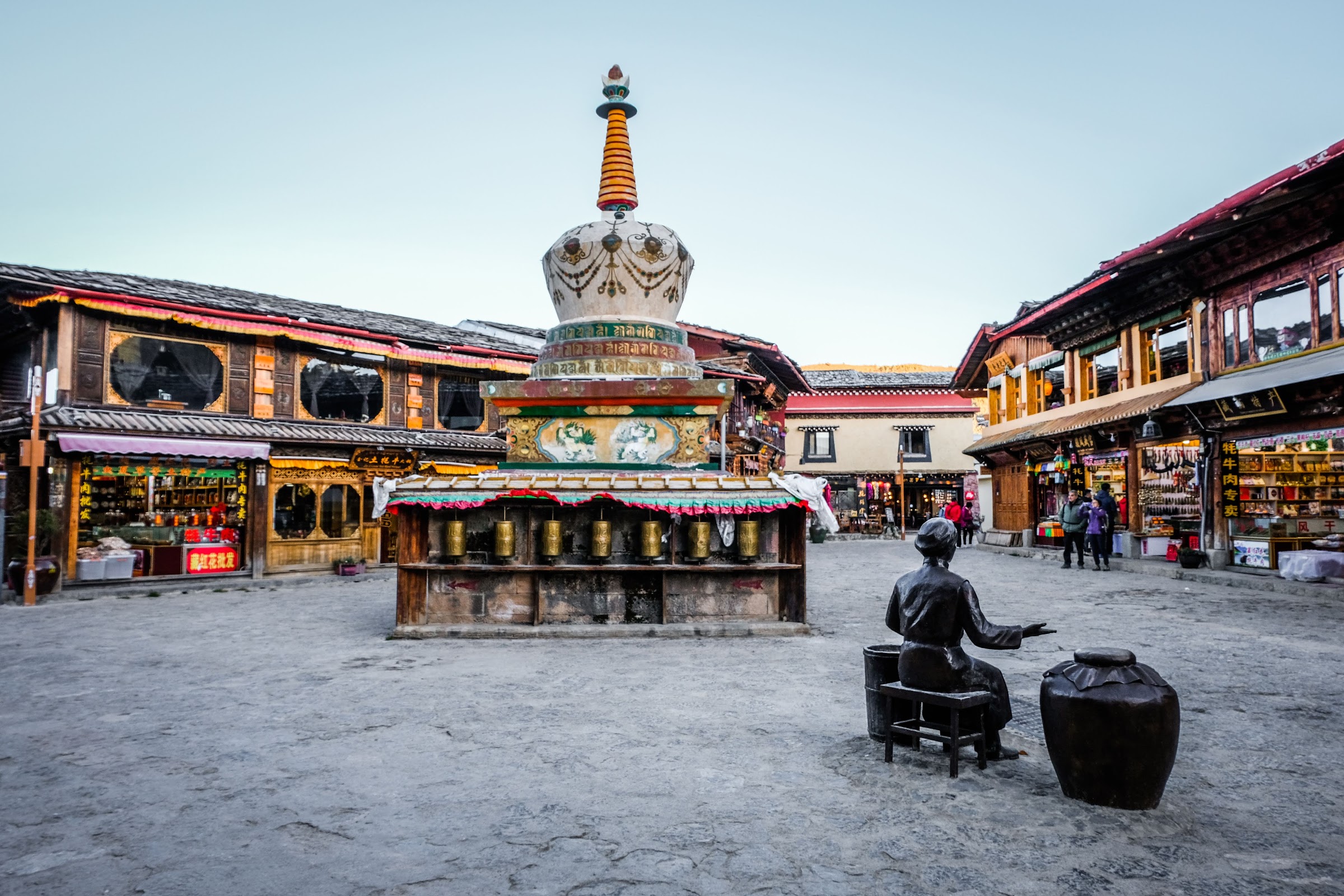 While I loved the atmosphere of the old town, the true highlight of Shangri-La was climbing Shika Snow Mountain. This 4500m high peak does have two cables cars if you want the easy way up, and it’s not as overpriced as usual, the entrance fee and a return ticket on the cable car cost 270¥ ($40). But I was determined to walk, and I’m so glad I did!

Getting there from Shangri-La is a real pain as the bus (#9) that takes you doesn’t actually exist anymore. I would have taken a taxi but a local guy drove me instead, then asked for my number to pick me up afterwards and proceeded to send me a thousand messages asking me to dinner, which I eventually stopped replying to and just took a taxi home at the end of the day. Awkward.

You can use Maps.Me as a guide, simply start the trek where the trail is marked on the left of the road leading up to the entry gate and cable car. It’s a steep climb pretty much the entire way up so make sure you bring plenty of snacks and water because for once there are no supplies to be bought as you go! It can also be extremely windy up there so bring a windproof jacket and some warm things to wear. 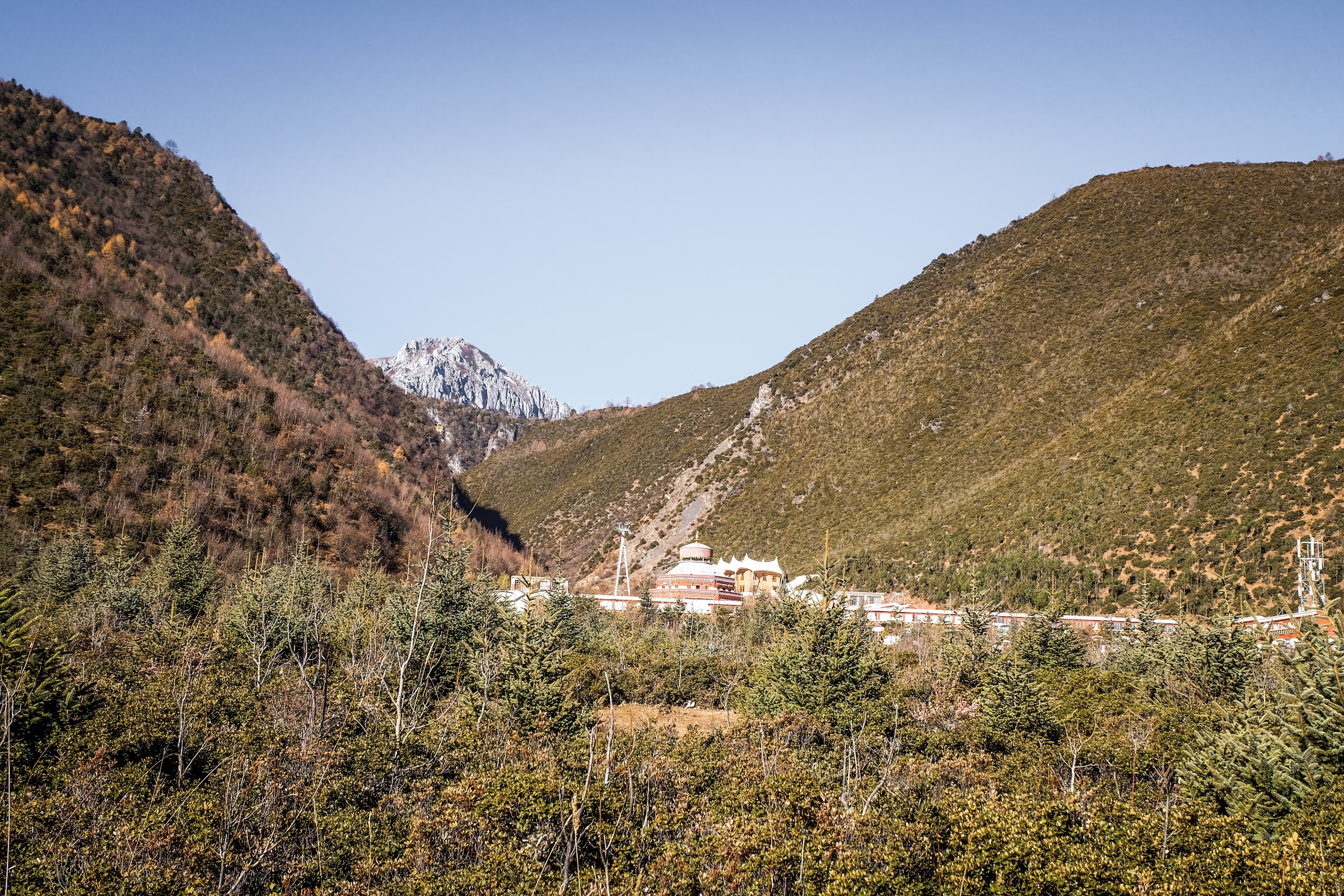 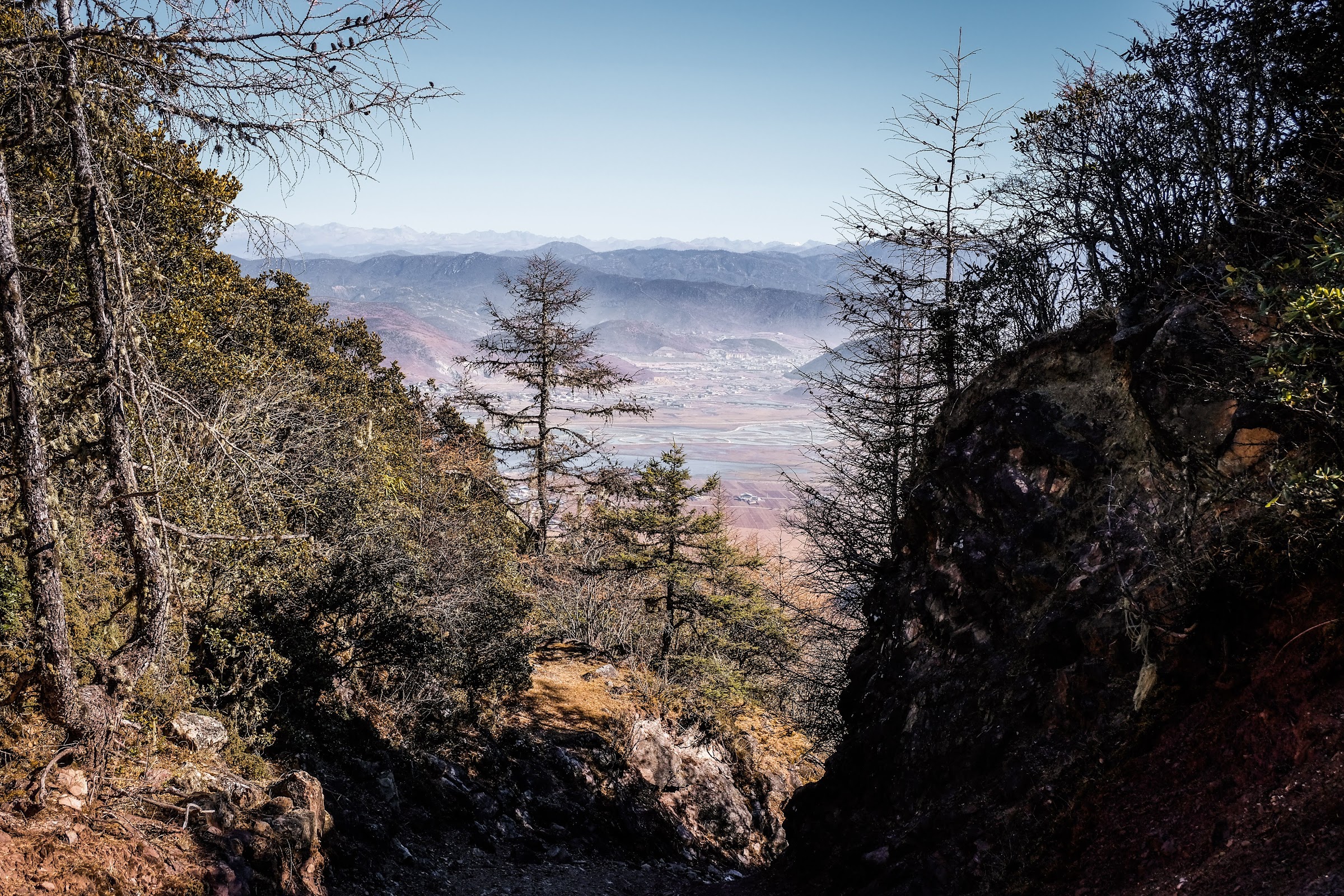 You’ll eventually reach the point where both cable cars meet and if you’re exhausted then you can easily hop on the second cable car going up, or if you’ve just had enough of everything you can always head down again. If you’ve got the energy to keep going then please do, it’s worth it! You can also use the toilets here if peeing in a bush isn’t your thing, but there wasn’t any food there so remember to pack your own. 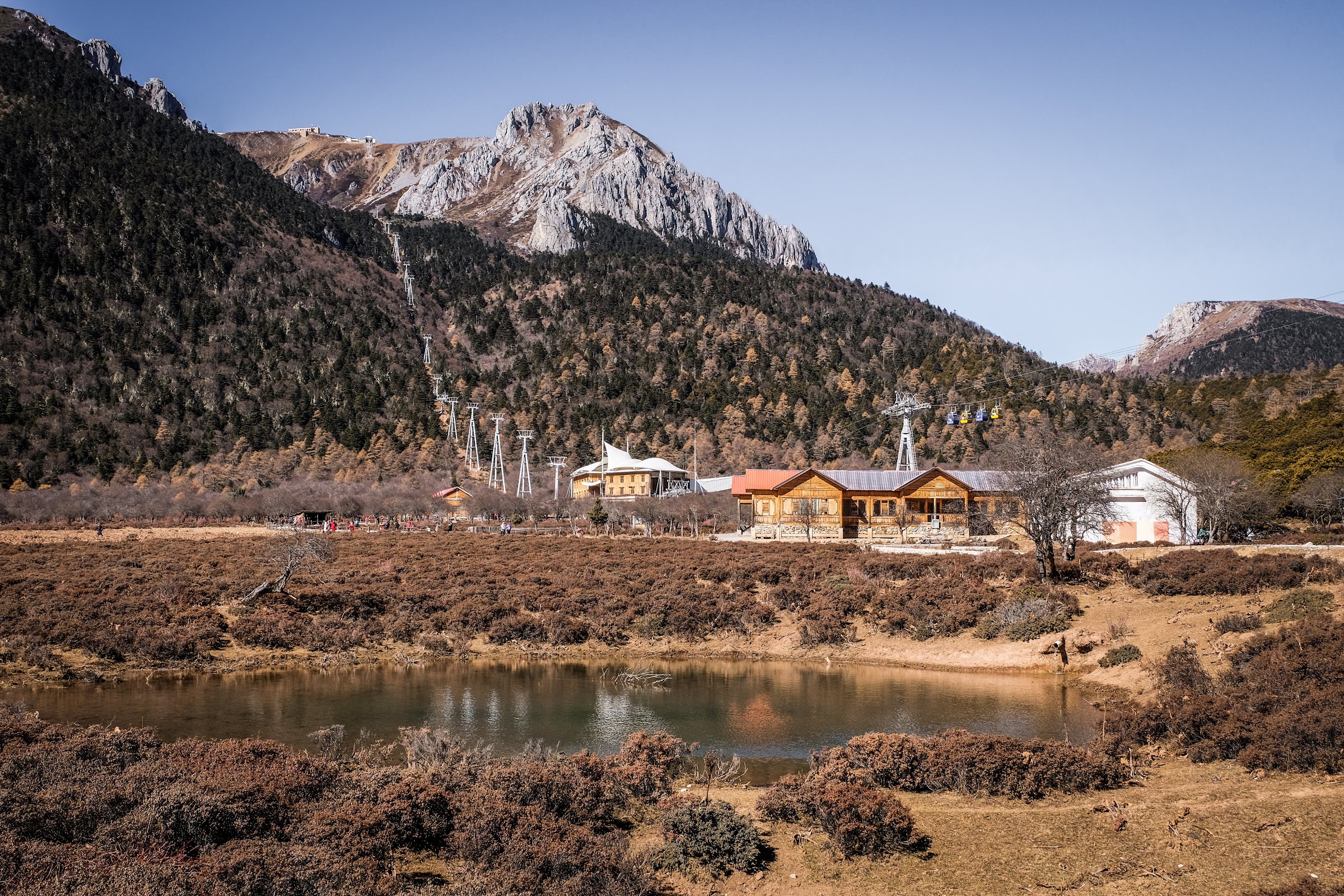 Once you reach the metal stairs leading to Rhino Lake (I didn’t go there because at this point I was knackered, but I bet it’s worth it if you can!), you can slowly climb to the peak with all the tourists who have taken the cable car. I got my photo next to the sign and was about ready to head back when I realised it wasn’t the real top! I came all that way and I wasn’t about to leave without reaching the actual peak. This is the spot to use the toilets and pick up some food or water if you’ve run out of supplies. 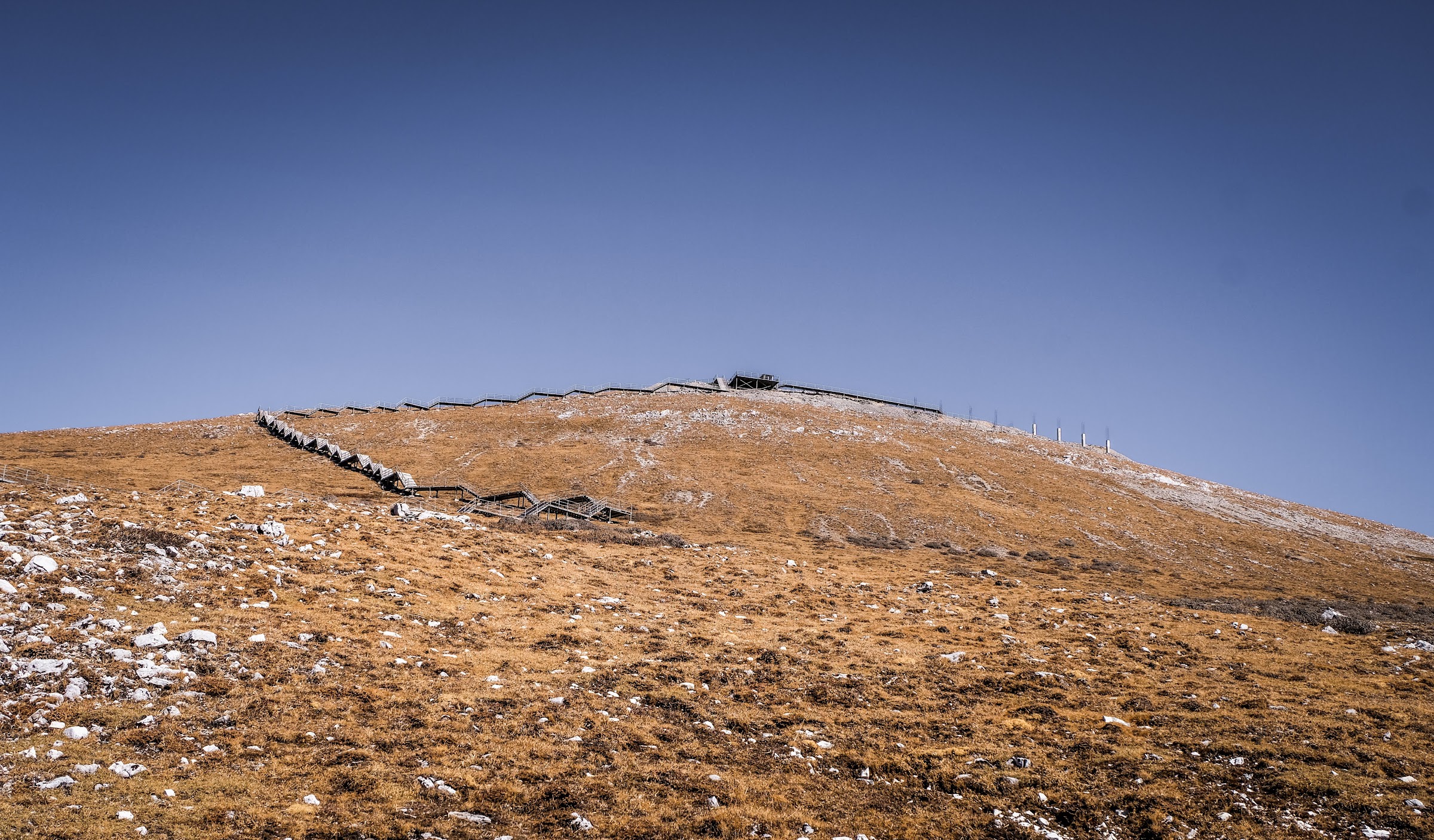 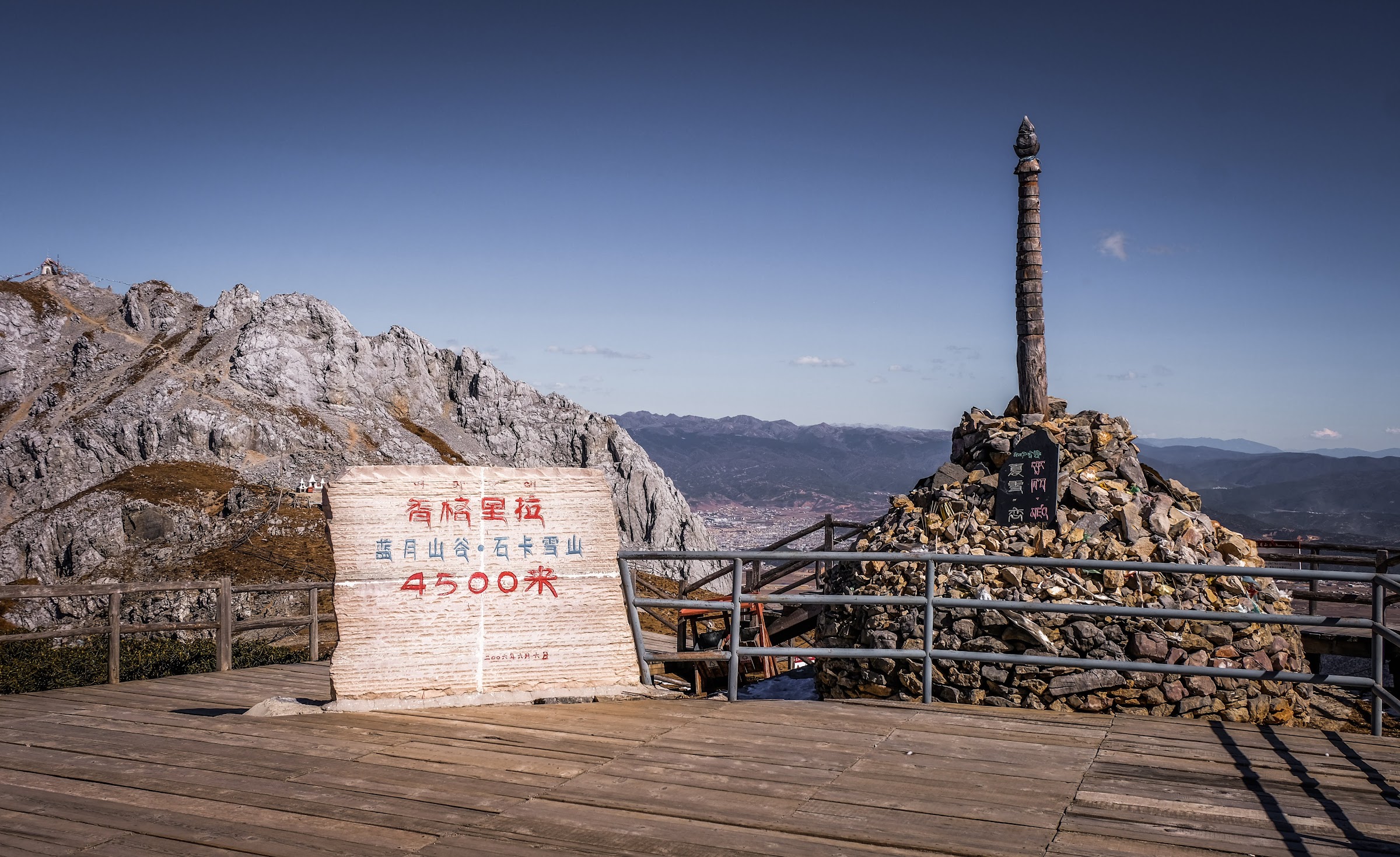 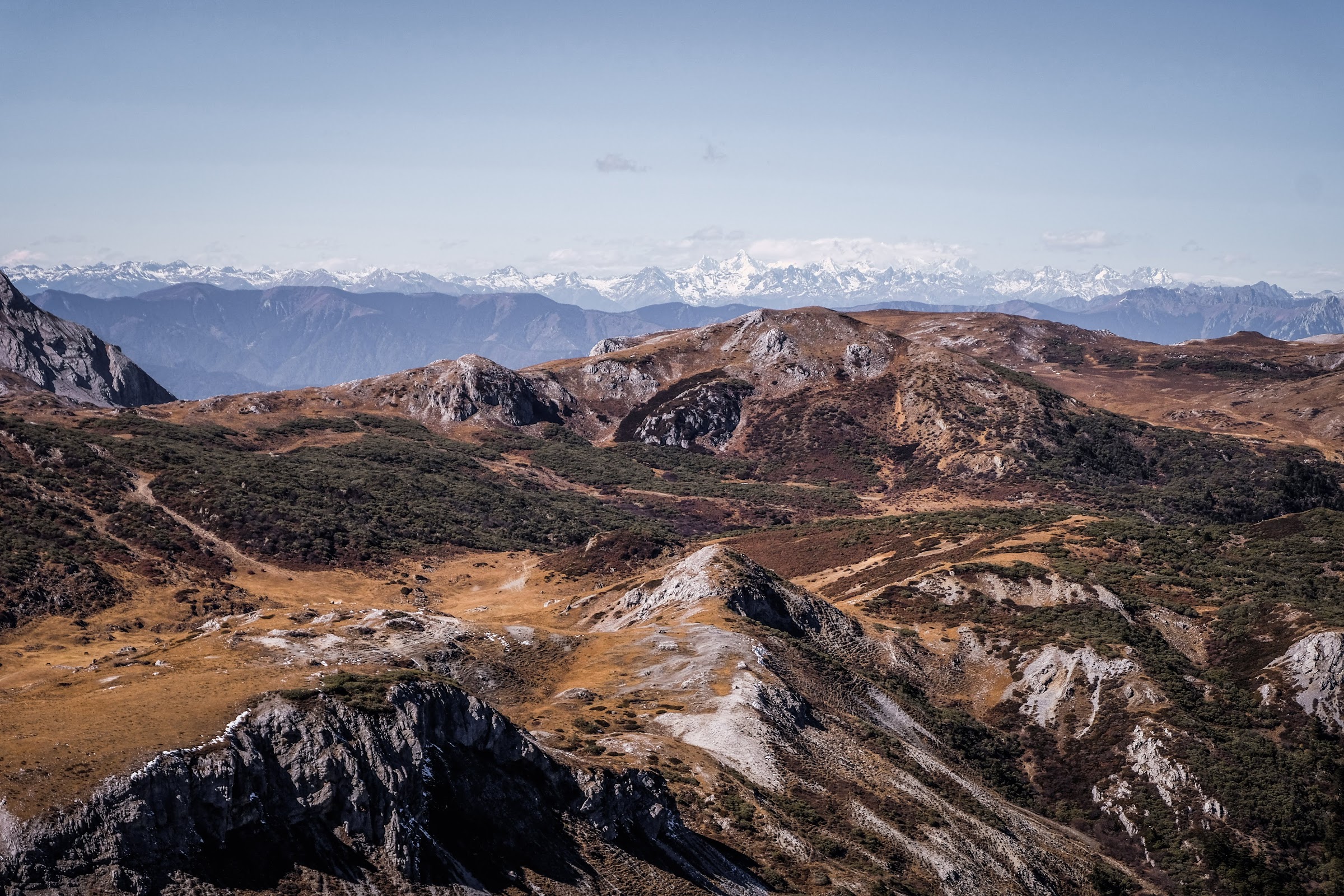 Here’s the thing, the real peak is actually fenced off. I suppose they don’t want people climbing it because it can be dangerous crossing the small scree slope… I hope it isn’t because it’s disrespectful. None of that crossed my mind because I was so determined, I made the last mad scramble in about 10 minutes and stood at the real peak feeling bloody fantastic! It was super windy and the altitude was getting to me at this point so I didn’t stay long, but what a feeling! 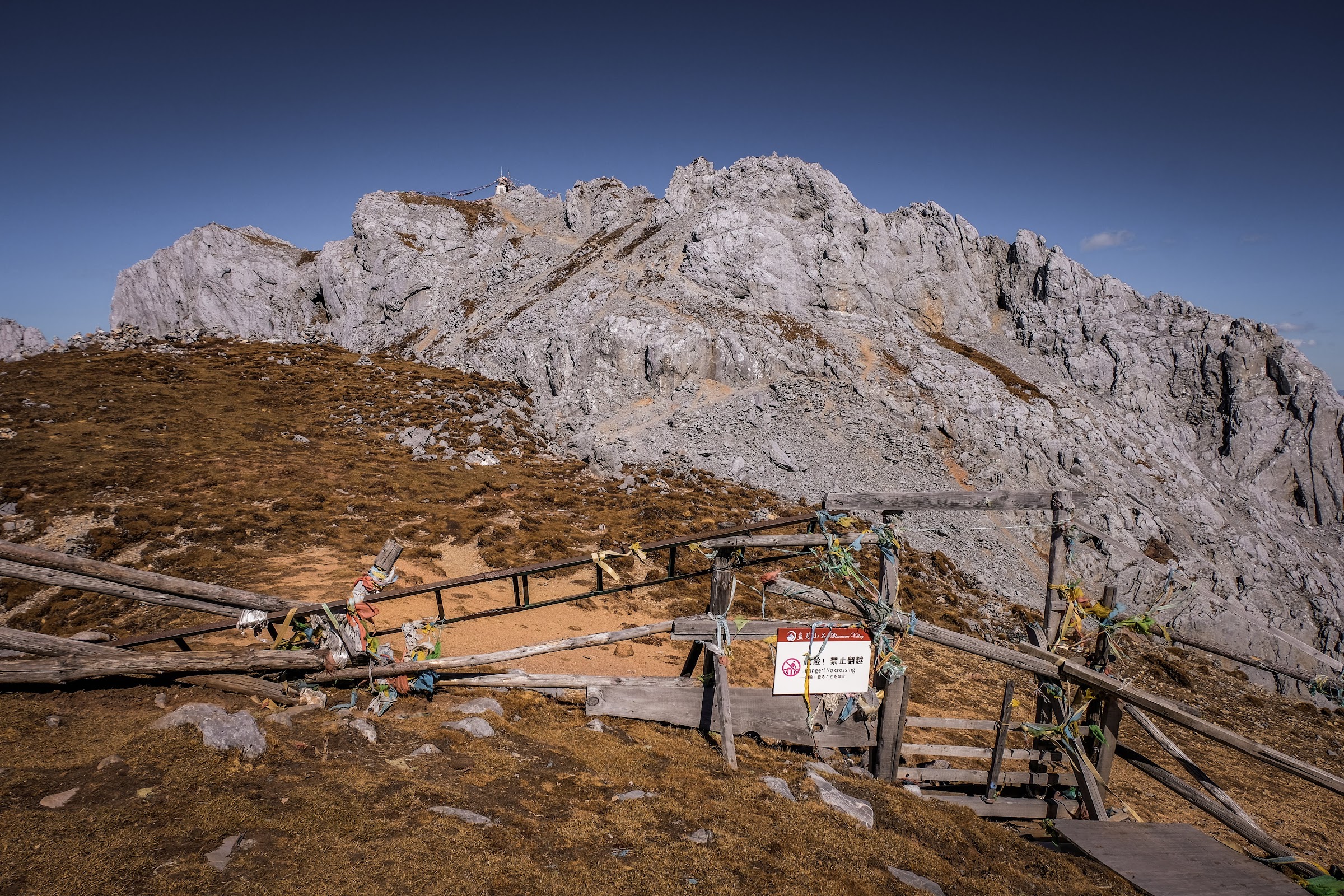 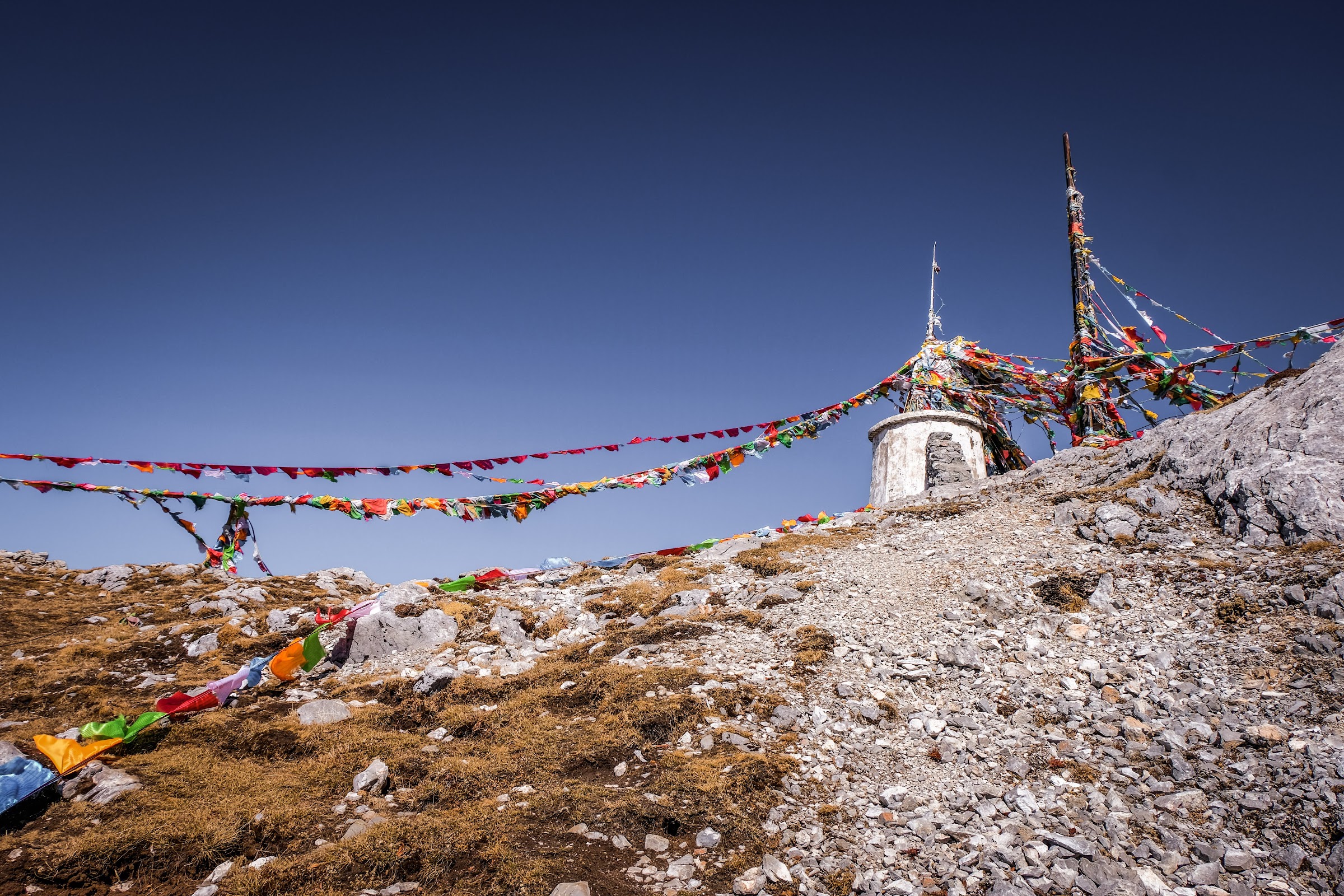 I was happy to walk back down from there, but I figured I’d try my luck with the cable car, and whaddya know? They let me on for free, without asking for a ticket! I guess the thought of people walking up there is just too absurd for them. Not surprising when it’s a 1300m ascent, far too much for one day at that altitude for anyone not already acclimatised.

The taxi back to Shangri-La ripped me off because of course they did. A single foreigner with no other way to get back to their guesthouse? Easy money! But none of that mattered because I felt like a bad-ass for being the only person to walk up this mountain in god knows how long. 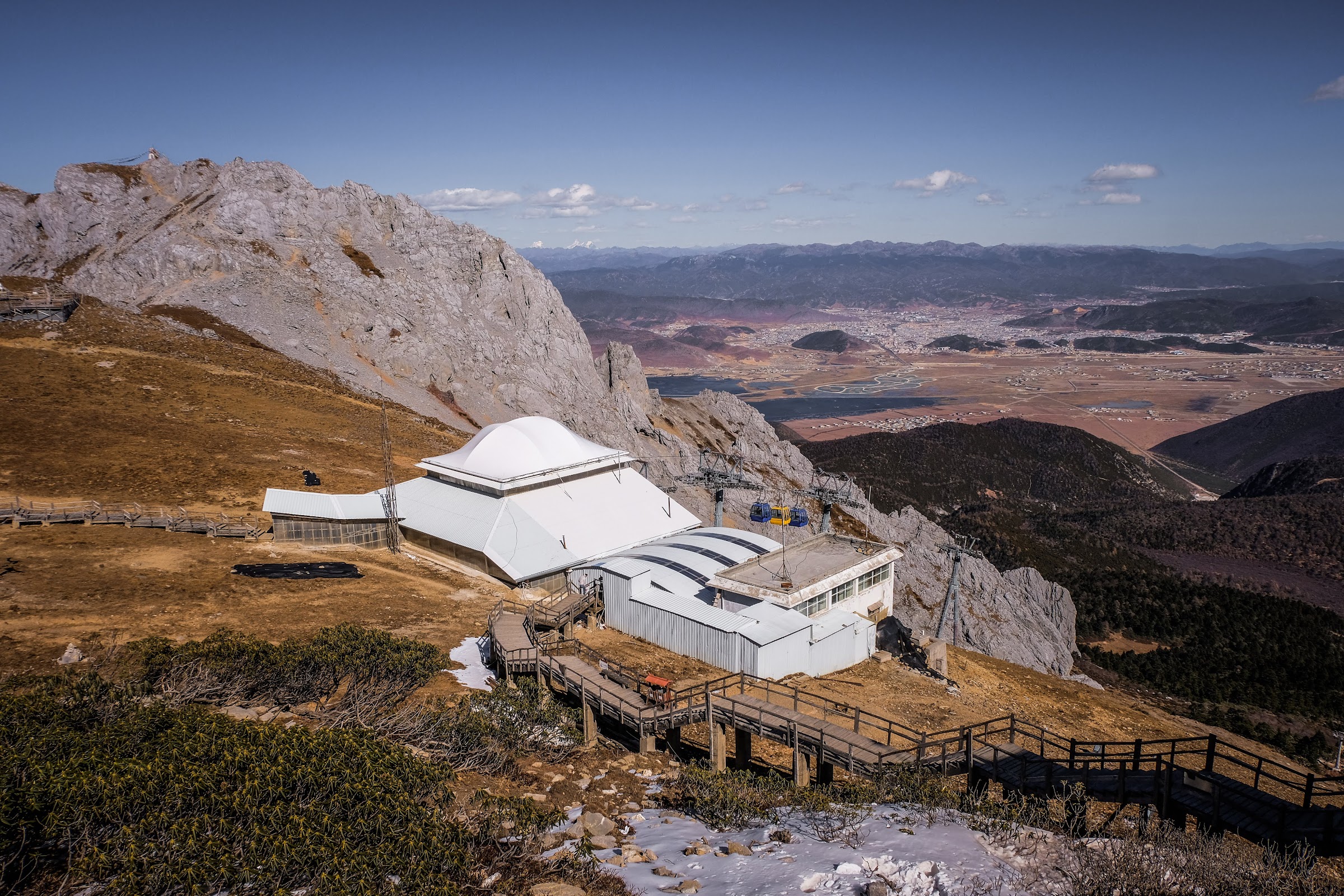 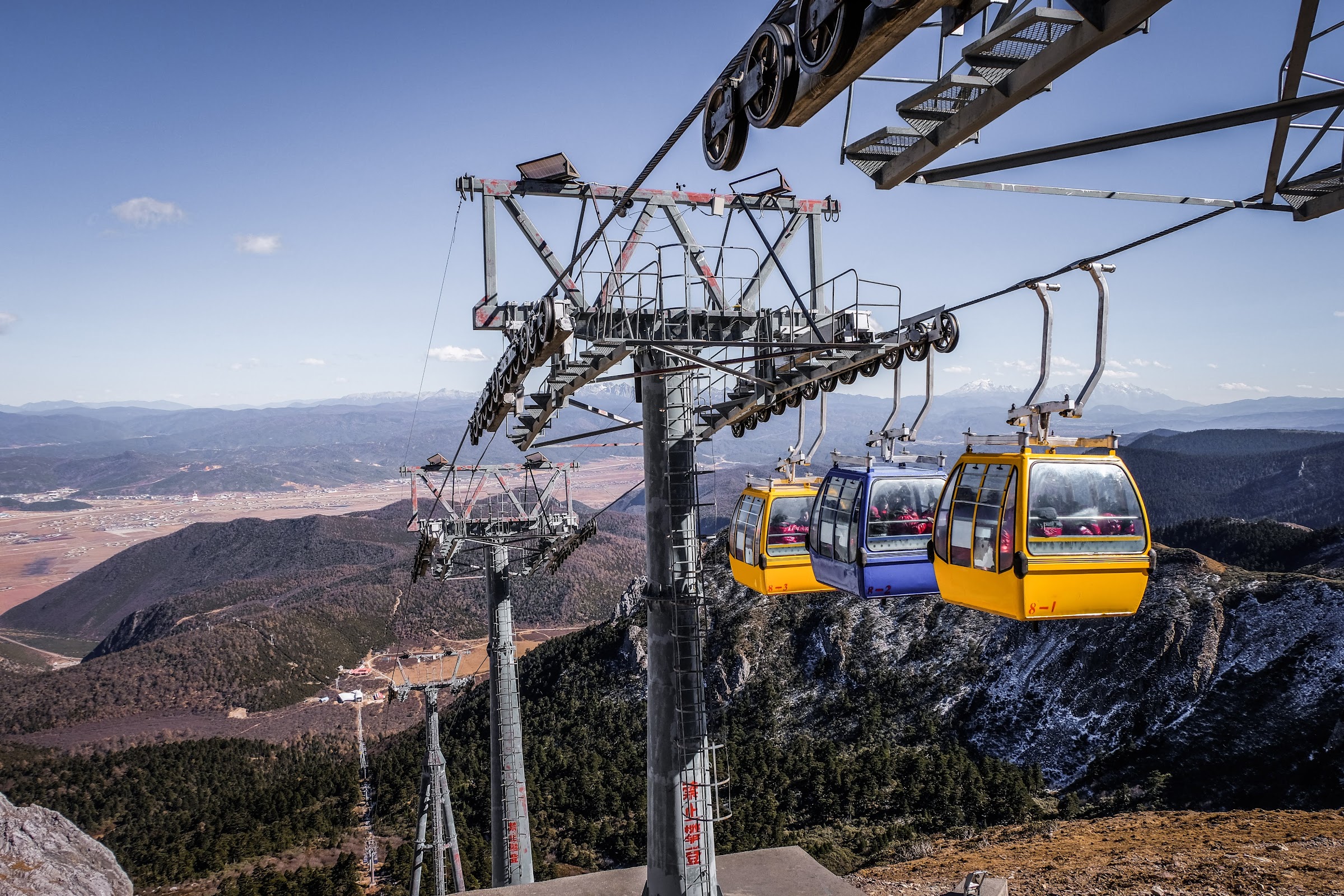 This hike might be tough for inexperienced or unacclimatised hikers, but don’t let that put you off if you’re in need of a good walk and a tough challenge! You can always grab the cable car halfway if you change your mind, you can walk up and take it down, or even ride it to the top and then walk down!

Let me know if you have any questions about the hike.